Many consider the ASMR community to be the largest on the internet. The acronym (for autonomous sensory meridian response) was coined in 2010 by Jennifer Allen on a Steady Health forum called ‘Weird sensation feels good’ – now the title of a new exhibition at London’s Design Museum exploring one of the most commonly searched terms on YouTube. 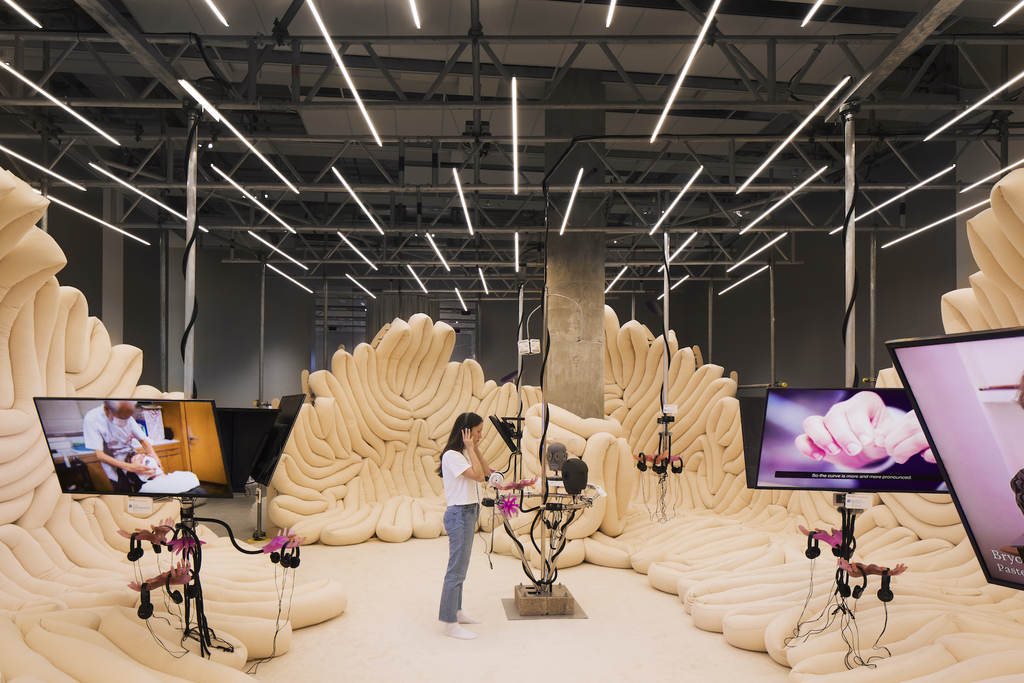 ‘I'm super interested in understanding the internet as a territory for design’, says the curator James Taylor-Foster, who originally staged the exhibition at Stockholm’s ArkDes museum – more specifically, at Boxen, a ‘curatorial engine’ where you could do ‘radical stuff that may not necessarily land in the way that you would hope.’ A world-first, the exhibition was a kind of exploratory act, ‘a way of planting a flag in the ground, legitimising this topic at an international cultural level. It’s about legitimising the territory for others to take up the mantle a little bit.’ Answering that very call, the Design Museum has filled itself with metres upon metres of squishy brain cushion. 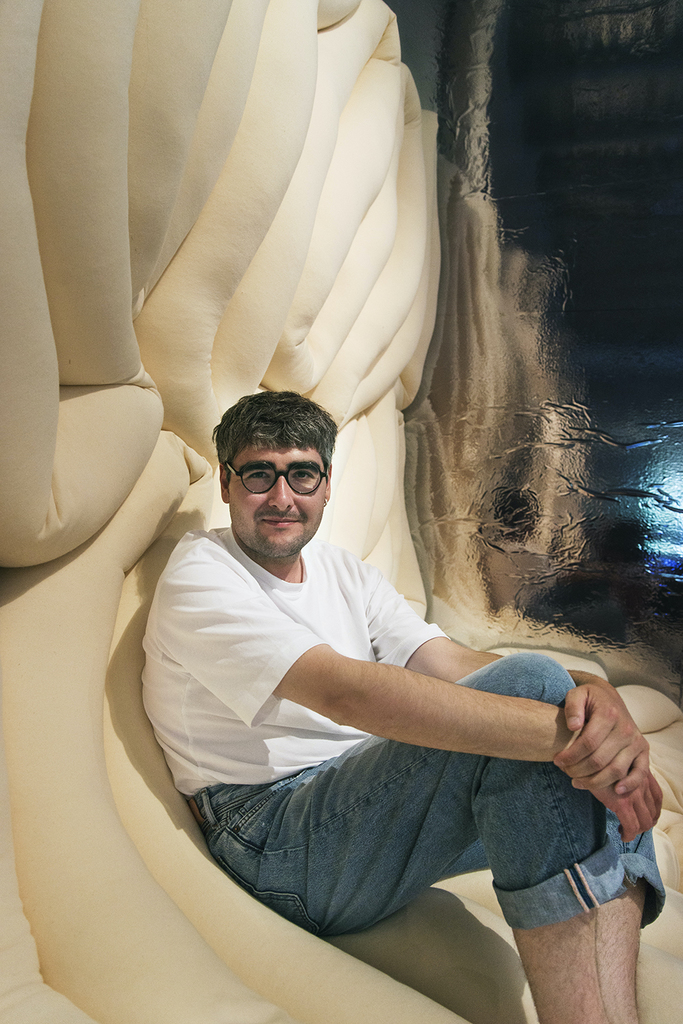 Indeed, for Taylor-Foster, ‘ASMR is built design’, and like all good design, it hasn’t manifested itself in a whispery vacuum, but rather, ‘ASMR is the product of, and the answer to, all the questions that we’re facing in societies around the world – particularly the most developed societies.’ Like what? Try, ‘chronic episodes of loneliness, for one, especially among younger people, and the need for intimacy’. With online videos and livestreams catering not just for tingles, but becoming ever more specified (Twitch added ‘social eating’ to its channel list in 2016, while an adjacent trend for studying was gaining traction last year) it’s clear there’s more hunger for online companionship than ever. As much as ASMR provides a cure for some, it is also undeniably a symptom of a more general malaise. Taylor-Foster firmly believes that the rise of ASMR correlates with ‘degrading mental health, heightened anxiety, high levels of depression, high levels of insomnia, difficulties with intimacy with other human beings’ – that’s why it has become so popular.

Meeting the demands of its own genre of online intimacy, ASMR is a form of design that mediates between mind and body. ‘It’s not purely intellectual, it’s not purely physical, it’s somewhere in between.’ Then again, and at its best, isn’t all art? ‘I think ASMRtists are involved in a specific practice, in a specific medium. You could connect it to foley art, and make all kinds of connections to existing artistic practices.’ Indeed, for psychologists such as Dr. Giulia Poerio, ASMR has been a key part of her research of complex emotional experiences and aesthetic emotions. 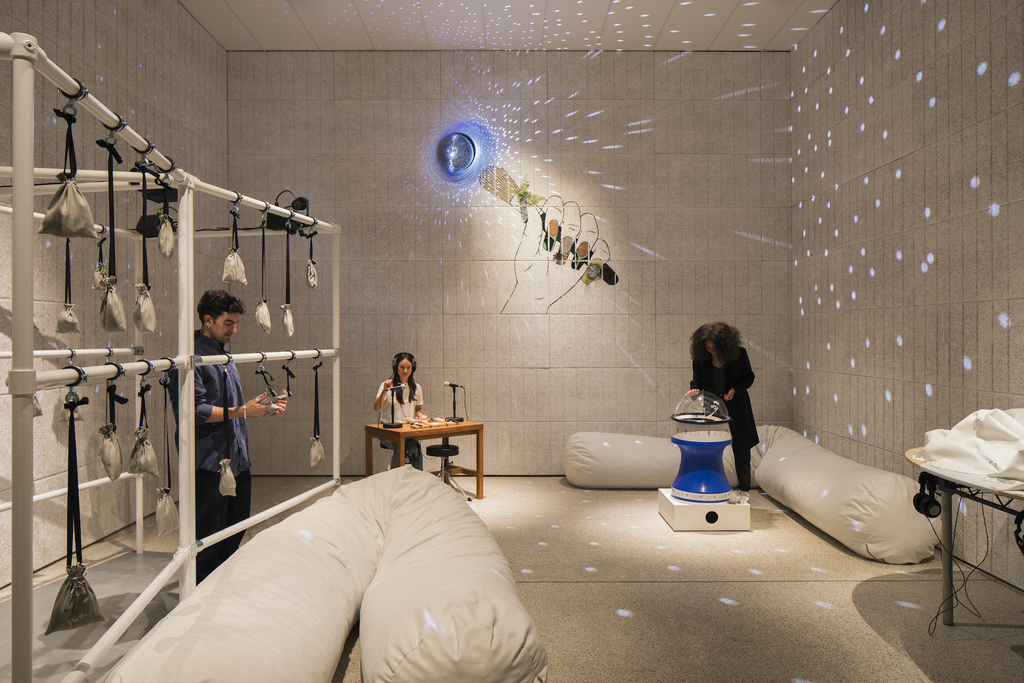 Perhaps what separates the ASMRtist from the artist, then, is merely the specificity of the solicited response. ‘What an ASMRtist is looking for is connection,’ Taylor-Foster says. ‘A genuine ASMRtist just wants you to feel relaxed and put you to sleep. That’s not a common thing among other artists. What ASMRtists do is they deplete their own ego. It’s this incredible space of care and intimacy online.’

"ASMR is the product of, and the answer to, all the questions that we’re facing in societies around the world" 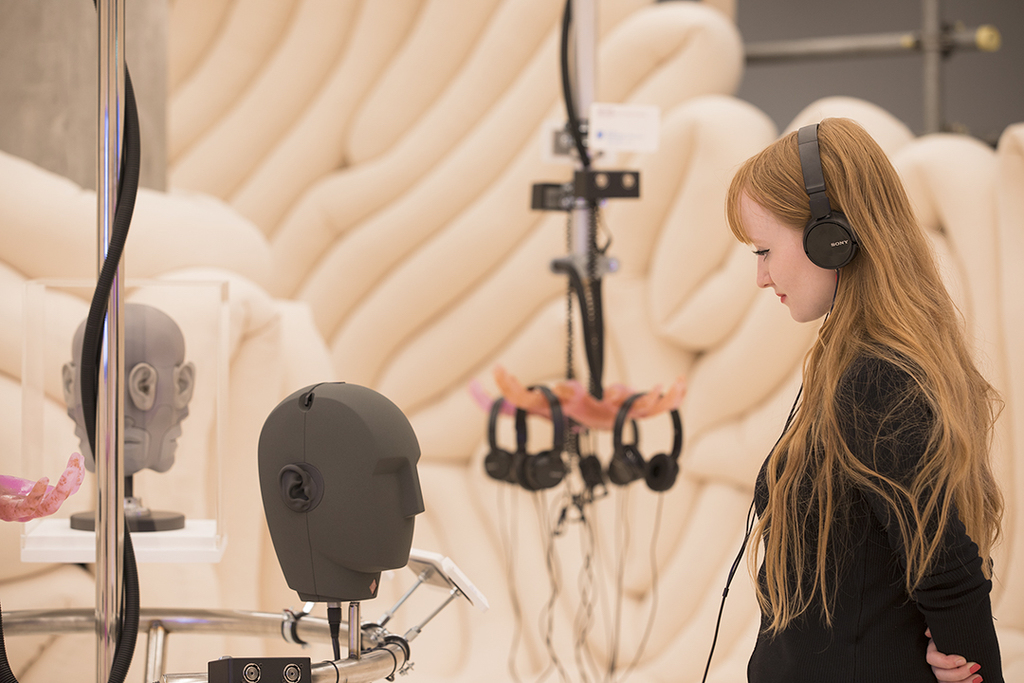 Sketching a timeline, the curator points out how quickly and seismically the digital landscape has changed: YouTube was launched in 2005, then in 2007, two years before Jennifer Allen started her research, the first iPhone was released. Now, however, those milestones seem like antiquity, and we spend a vast proportion of our lives ‘engaging through frictionless glass surfaces’, as Taylor-Foster points out. ‘The tactility of the world around us is not translated into the space where we spend our lives’ – and, in a way, ASMR does the reverse, translating sound back into tactility. 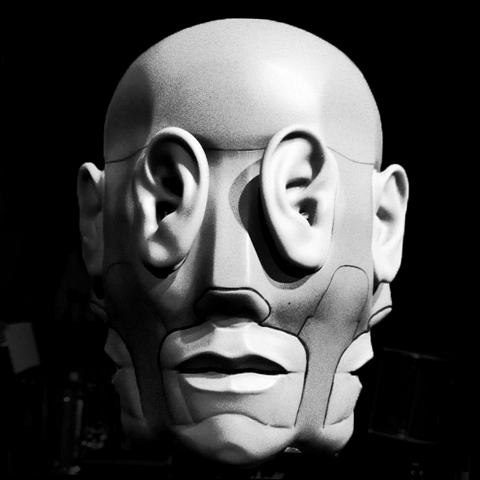 "What an ASMRtist is looking for is connection" 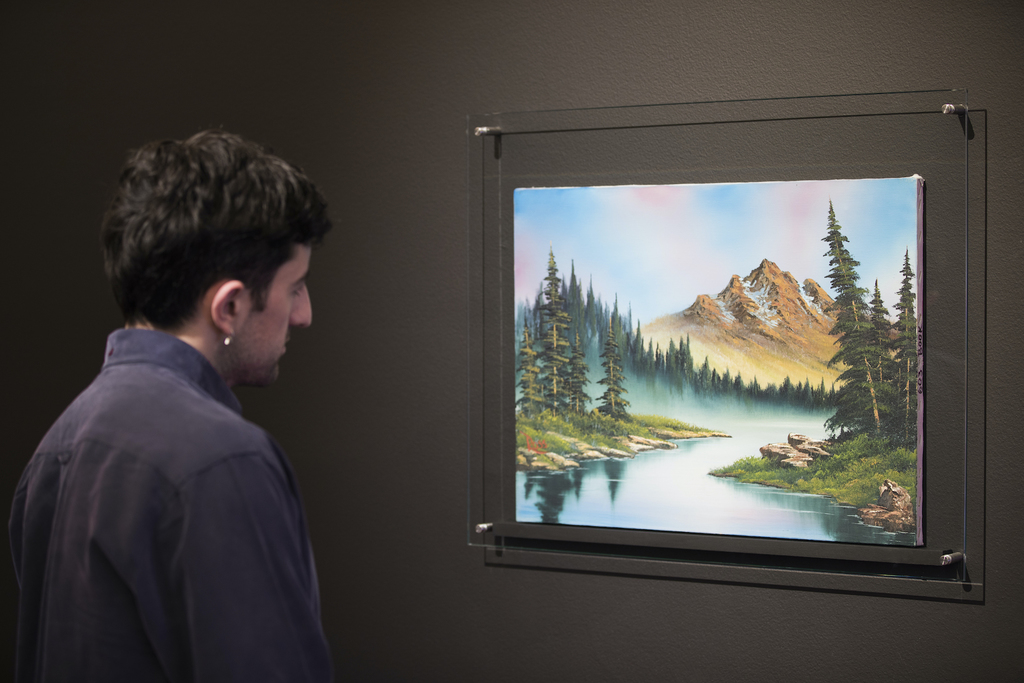 As the exhibition Weird Sensation Feels Good makes clear by including unintentional ASMR (see: the sibilant slice of a scalpel through paper), the history of ASMR predates the 21st century. Often cited as the ‘godfather of ASMR’ is Bob Ross, who died in 1995. ‘He has been a really important bridge character,’ Taylor-Foster says. ‘A lot of people from older generations, especially in the US, know Bob Ross as a TV painter. And a lot of young people, especially under the age of 20, either know him as a meme, or as an ASMRtist, because he was appropriated by the ASMR community.’ 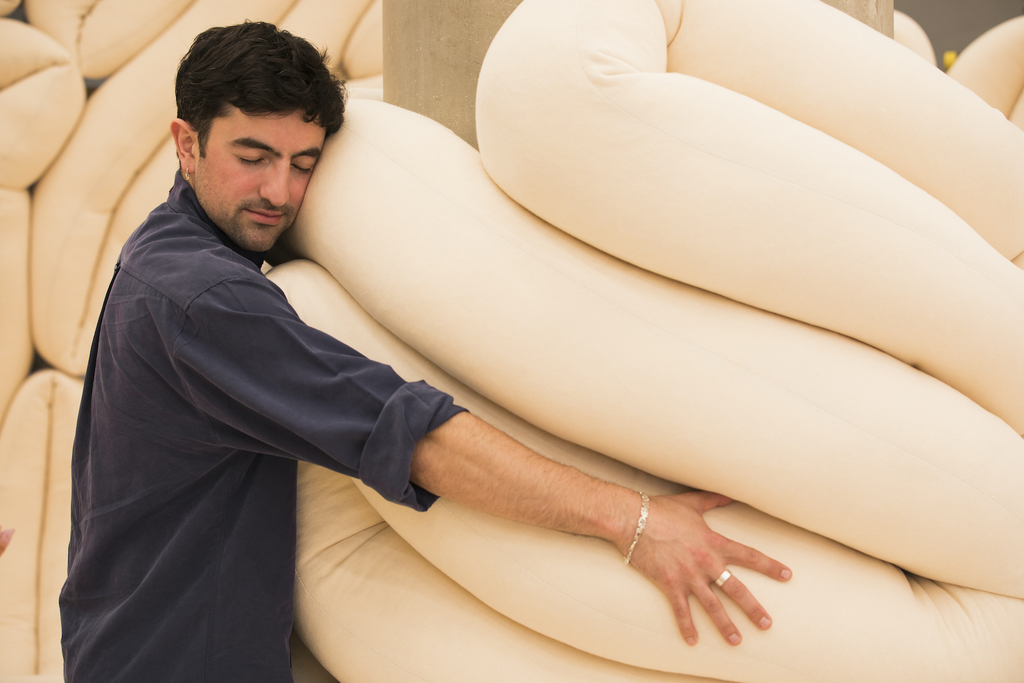 On his TV show The Joy of Painting, Ross spoke softly, sprinkling every third sentence with a positive affirmation. Beginning with an empty canvas, he would spend his time brushing, scratching, stippling – all common triggers. A half-hour later the painting would be completed, and for those so inclined o how the mind tingled. 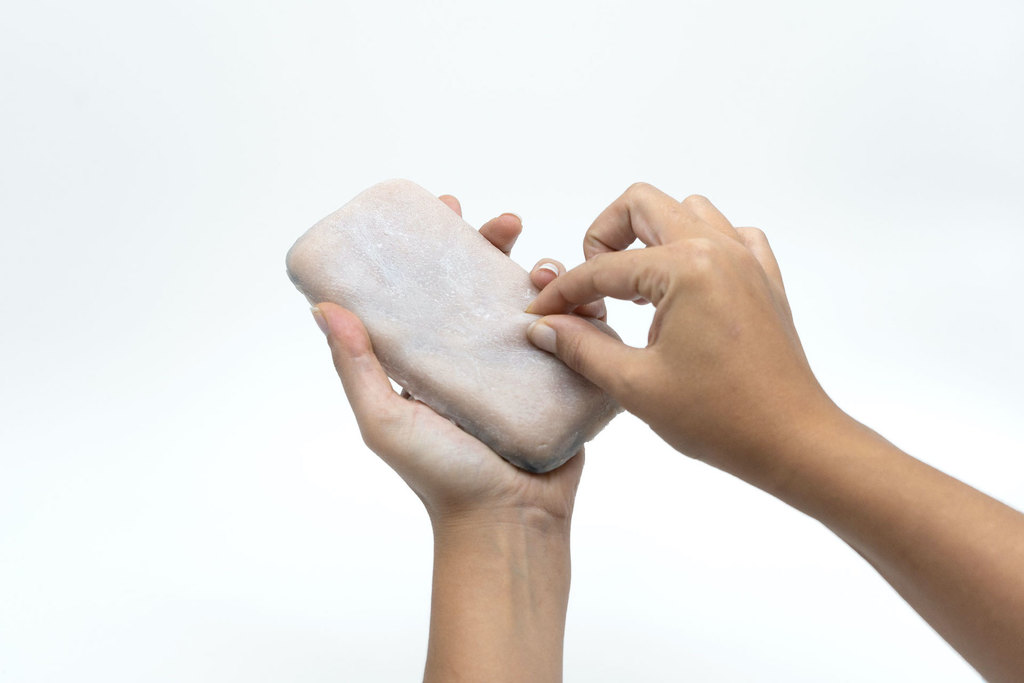 Perhaps it’s no surprise that during a time of extreme stress and isolation (pandemic; late-stage capitalism) a great number of people would look to a mode of digital interaction which facilitates intimacy and relaxation. Its community finds comfort through a willingness to be vulnerable with one another. Touching through a frictionless glass surface might not be a magical act, but maybe it’s the ‘weird sensations’, the ones we might not have words for yet, that we ought to be listening to. In the words of Bob Ross, ‘Go out on a limb – that’s where the fruit is.’