Thread by Thread: An Interview with Anya Paintsil

Gathered from Africa and its diaspora, 1-54 London 2020 showcases contemporary art from over 110 emerging and established artists, including Welsh-Ghanaian artist Anya Paintsil, who is exhibiting there for the first time. 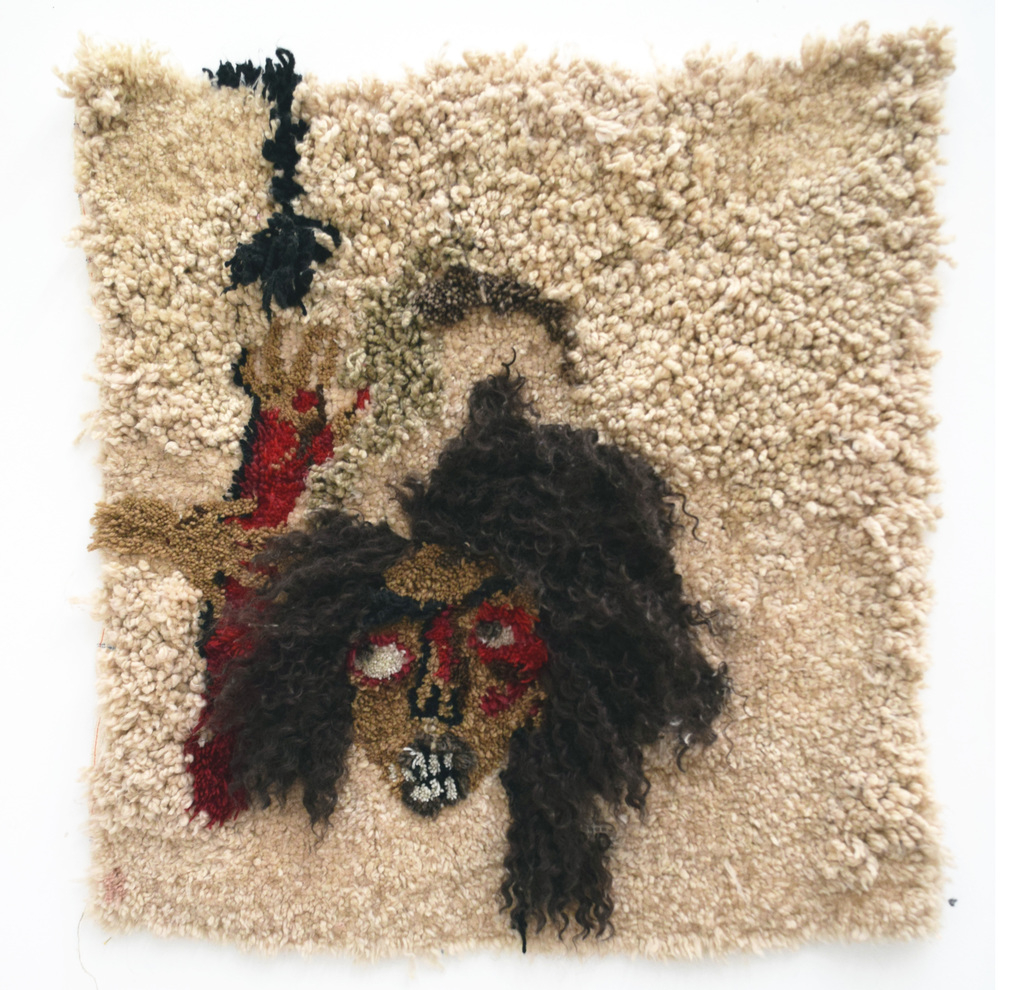 The immediacy of Anya Paintsil’s textile faces and bodies belies the laboriousness of their making. A glance at the artist’s Instagram highlights reel reveals a marathon runner not a sprinter, as the woman from Me and Jack (2019) cries tears of thin blue cotton thread against a mostly bare rug hooking canvas. The image of her then-work-in-progress is captioned with typical humour and playfulness: ‘expected finish date 2069’ with an emoji blowing a party horn. Paintsil works primarily with punch needling, weaving and braiding human hair and kanekalon hair, as well as latch hooking. The latter technique requires pulling loops of yarn or fabric through a stiff woven base, and Paintsil explains how fully latch-hooked works, such as Self Portrait (2018) and Me and Jack, ‘are made up of probably over 100,000 individually cut pieces of thread’; the former took ‘about six months to make’, the latter ‘three or four months.

"a lot of textile art – or any art that has been classified as decorative – is historically thought of as being a frivolous hobby, or a dainty pastime – whereas this is something that you need to put strenuous effort into constantly." 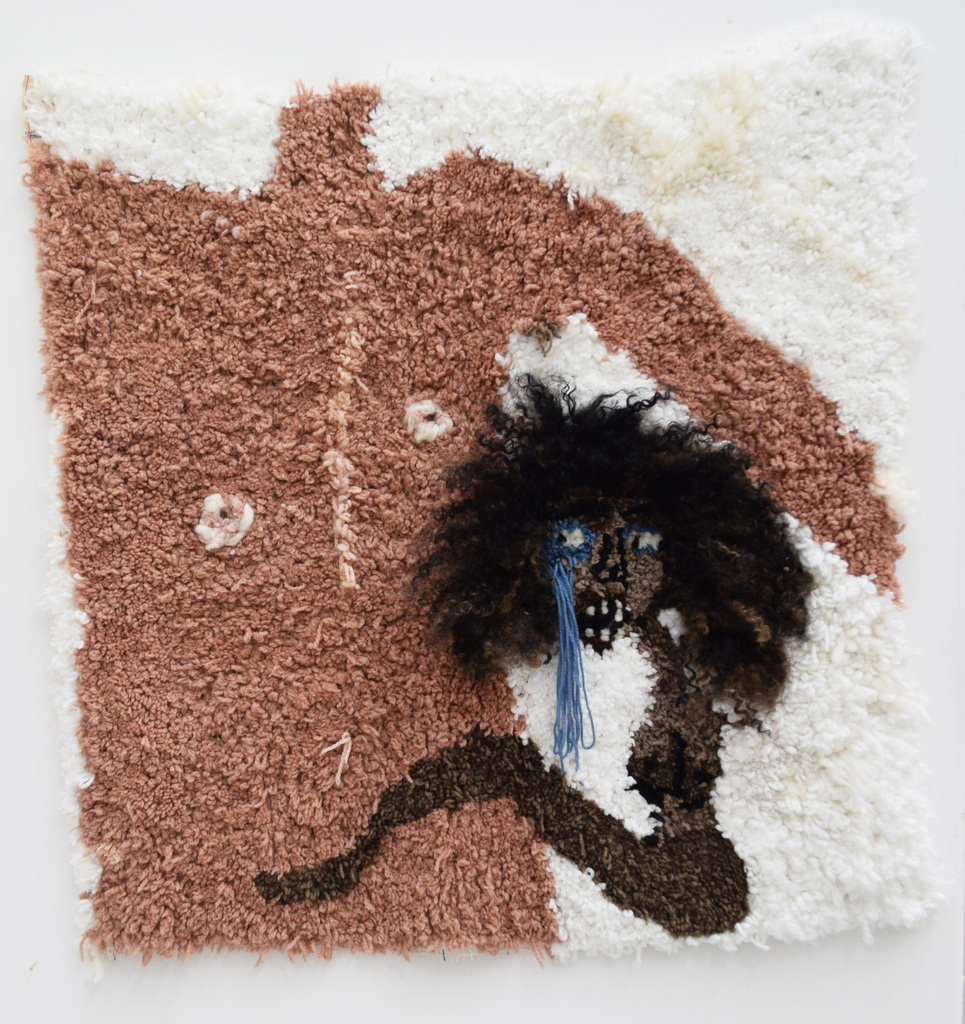 ‘I enjoyed putting time into it,’ Paintsil says, but it’s also important to her that when people view one of her works, they understand the amount of labour that went into it. ‘Mainly because, a lot of textile art – or any art that has been classified as decorative – is historically thought of as being a frivolous hobby, or a dainty pastime – whereas this is something that you need to put strenuous effort into constantly.’ 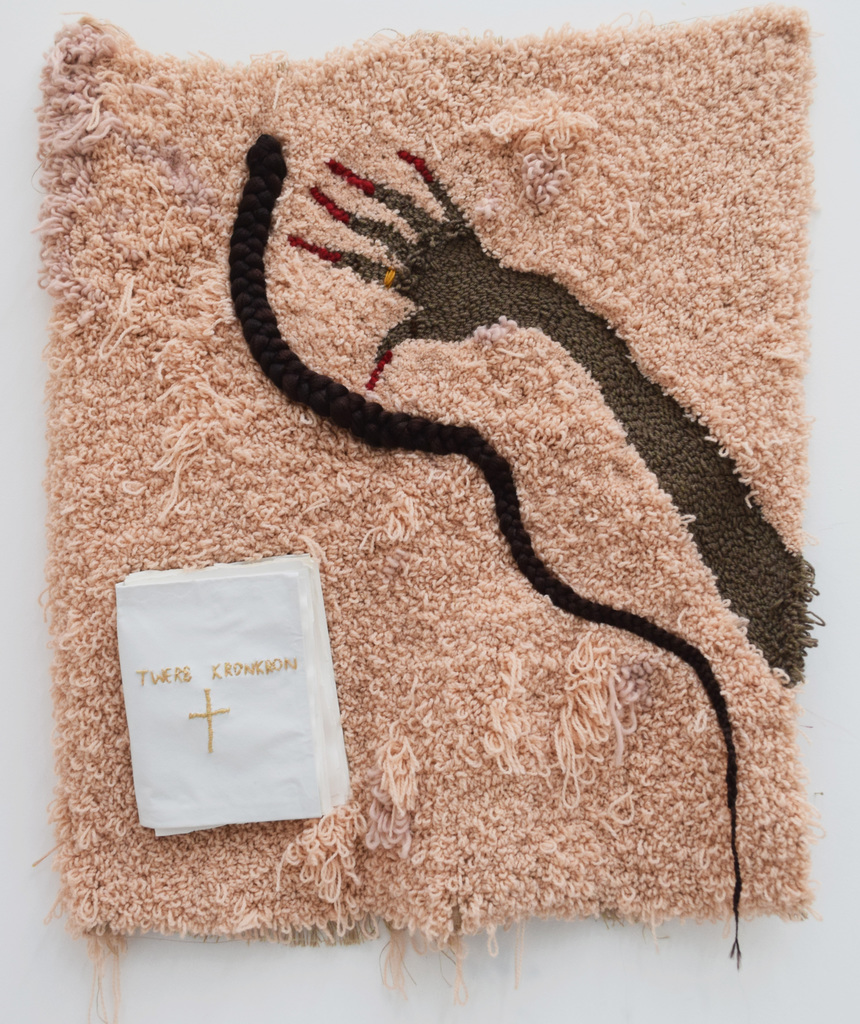 Paintsil’s chosen medium is an historically female one, and has been often overlooked by the canon. ‘I think that’s a really big part of why I work with textiles – especially looking at textiles more associated with utility than with the decorative. Obviously, there is an intersection between the two, like a rug,’ she concedes, ‘but I wanted to work in the lineage of working-class women's textile history, as opposed to upper class women's textile history, which tends to be more needlepoint or traditional embroidery. I wanted to work with heavy duty materials that were made for a purpose, as opposed to something that was for a rich woman's pastime. A big part of my heritage is working with textiles. My mum's side of the family are from rural Anglesey and there are a lot of farmers still in my family. […] So, I have that Do It Yourself mentality – or build it yourself.’ 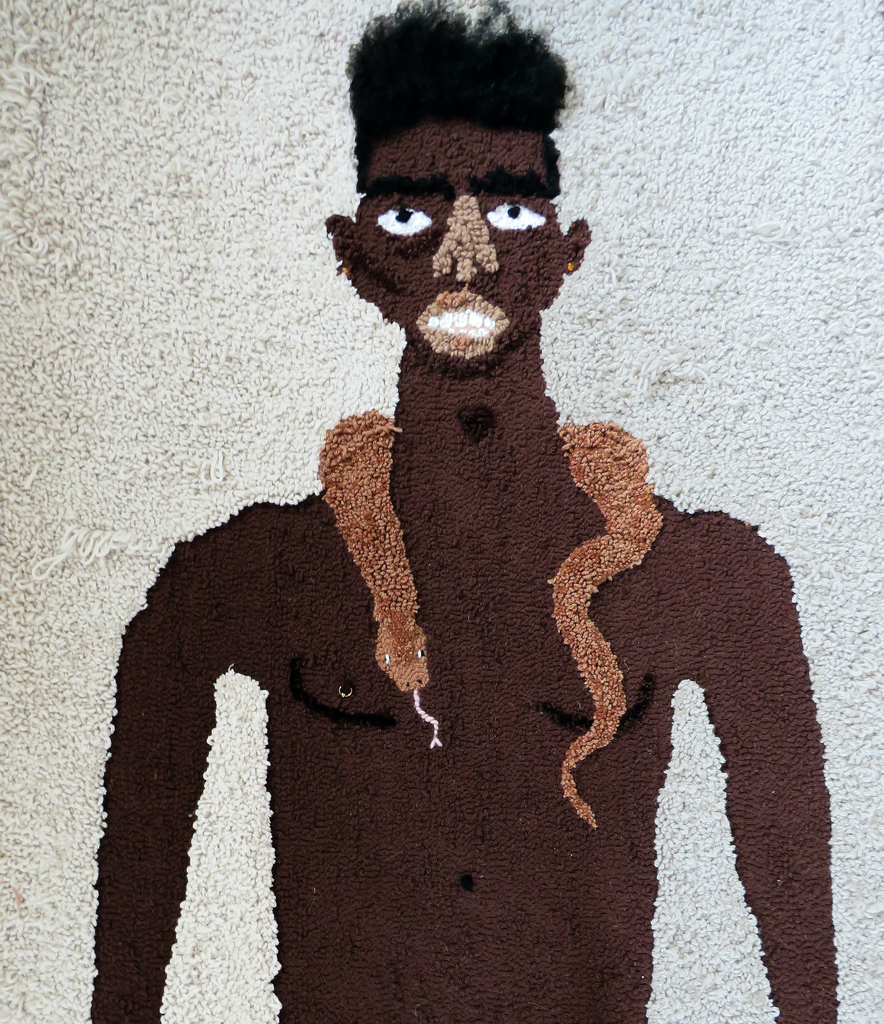 Indeed, that homespun quality (these works emphatically could not have been done by machine and seem to announce their made-ness with uneven textures and idiosyncratic details) draws you into an intuitive yet complex relationship between artist and viewer, hand and eye, the haptic and the visual. Yet, it’s more than an aesthetic gesture on Paintsil’s part. ‘I want to communicate that certain techniques, certain ways of working, or certain objects are art and elevate them, so that they can be viewed as fine art, as opposed to being dismissed as craft.’ 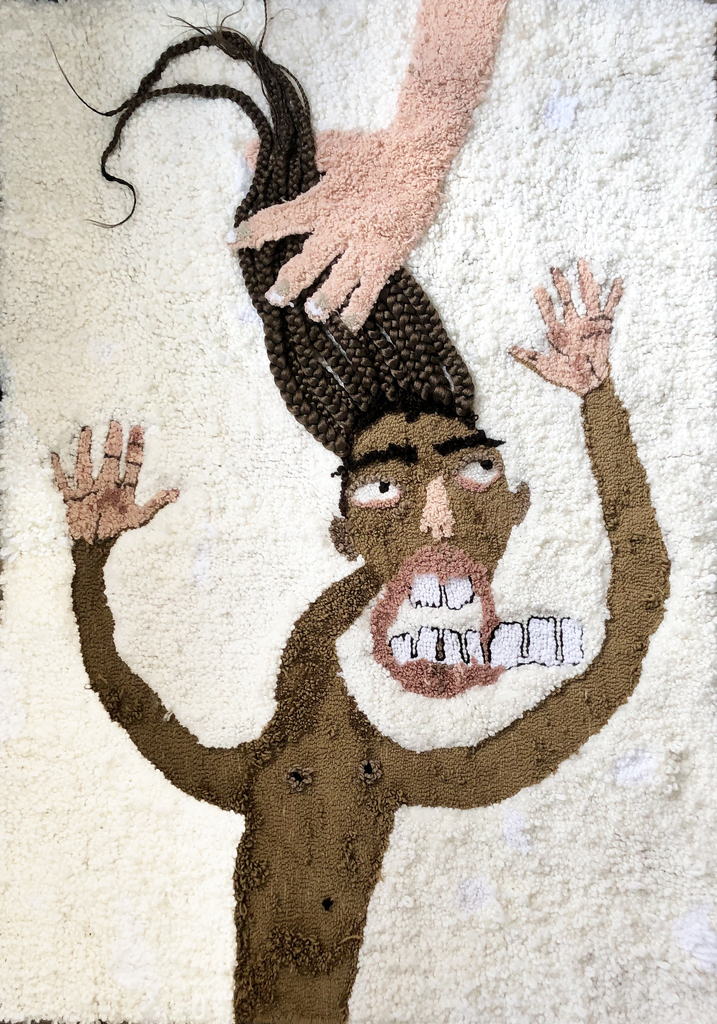 "I want to communicate that certain techniques, certain ways of working, or certain objects are art and elevate them, so that they can be viewed as fine art, as opposed to being dismissed as craft."

Just as Paintsil wields techniques familiar to her from childhood – and she has been rug hooking since around age ten – many of her works bring in her experiences growing up in Wrexham, North Wales. One such piece is Anya or Anum (2020), an assemblage of ‘disembodied body parts, bits of bodies in different kinds of shades, faces which are removed from the bodies -- a kind of jumble’, as Paintsil describes it. ‘I make a lot of work about race and racialised experiences outside of major cities. So, in my case, that's being a Welsh person who is mixed race, or is often racialised as black’. Anya or Anum explores memories of ‘being confused with every other person of colour – whether they be mixed race, or black, or South Asian, or even East Asian, within a 30-mile radius.’ Paintsil goes on to explain that the eponymous ‘Anum’ went to her school. Despite Anum being South Asian and having left the school by the time Paintsil arrived, ‘I was constantly called Anum by all of the teaching staff and students.’ 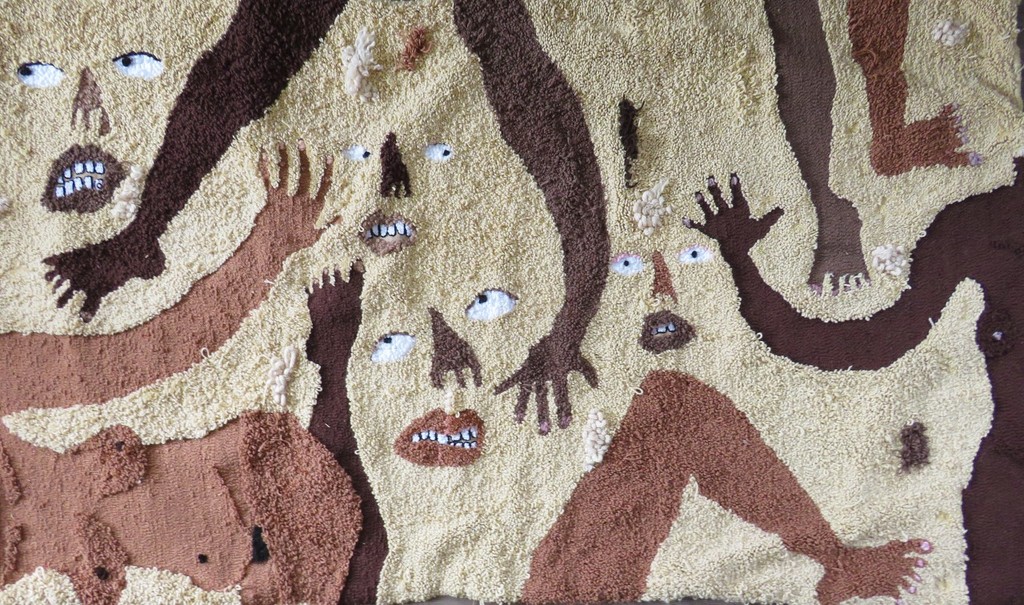 Is there anything more intimately entwined with our sense of identity than our name? One of the most basic forms of teasing among children is to twist the name of their victims; as adults, forgetting someone’s name is one of the biggest social blunders we can commit. Anya or Anum, and the biting interchangeability of that ‘or’: no wonder the faces here look at first glance to be rolling their eyes. On second, third, or fourth glance, however, the eyes appear furtive, searching and fearful. The face on the right-hand side stares out at the viewer and, with this locking of the gaze, is no longer a face in the crowd: this, together with the way Paintsil renders exaggerated Afrocentric features, is perhaps a rejoinder to the depersonalising effects of being misidentified and ‘grouped together’ with other people of colour. ‘We were categorized as being essentially the same person,’ Paintsil says. ‘I really resented being put in the category of “other”.’

"Is there anything more intimately entwined with our sense of identity than our name?" 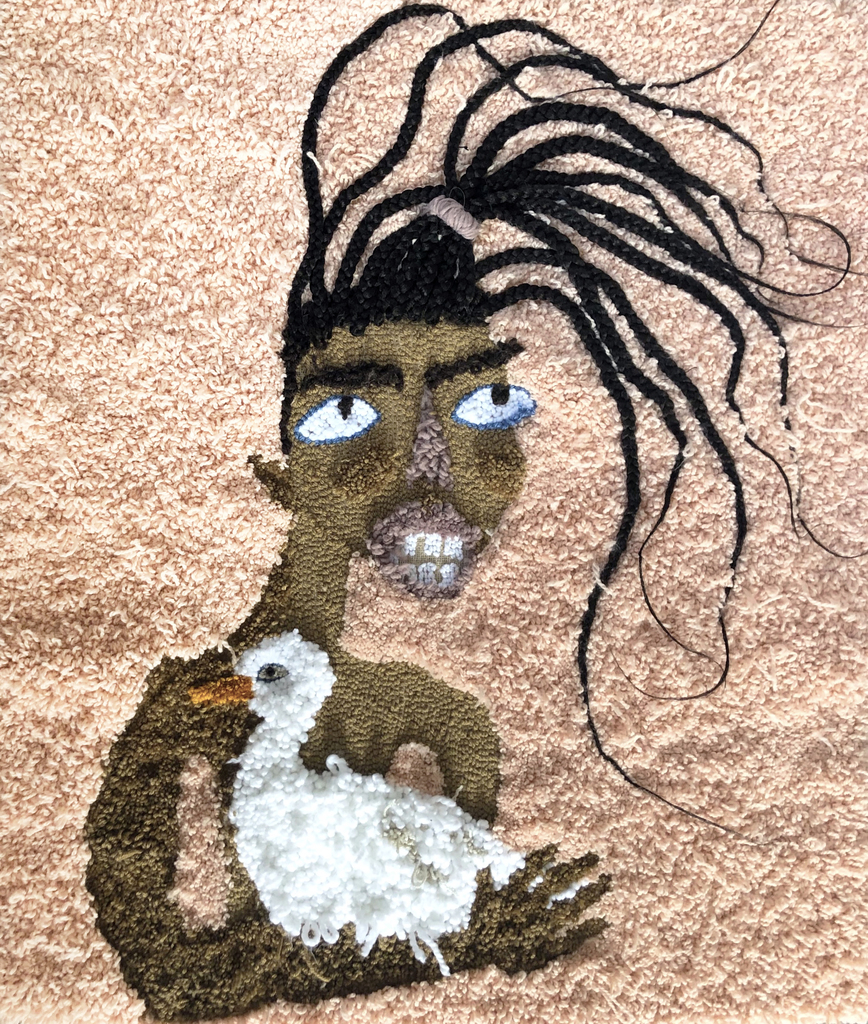 Born in 1993, Paintsil is a first language Welsh speaker. ‘At that time, being only associated with the Welsh language speaking community,’ she explains, ‘there were even fewer people of colour around. So, it was kind of a really odd experience where people just looked at you constantly, like you're an alien. You were assumed to know every single person of colour around you, or people thought we were “in cahoots”, or something like that’. Paintsil sometimes gives her work Welsh titles, such as Mair at Cylch Meithrin, another 2020 work. It shows the artist’s sister as a child at ‘cylch meithrin’ (‘a direct translation would be “circle nursery” – play group essentially’) holding a toy duck ‘called Flappy’. ‘It’s kind of an iconic thing throughout our family history of looking back through different photo albums that my sister is always looking really miserable and clutching a duck,’ Paintsil says.

Again, here the personal (and what’s more personal than family folklore and one’s mother tongue?) meets the political. ‘I think naming specific pieces in Welsh to draw attention to that facet of my identity has been something that's quite important to me, to also let people know that when they're looking at the work that I am a Welsh speaker […] Welsh-ness is also often thought of as being a specifically white identity. The Welsh language has never been associated with people of colour, and people are often shocked to find out that I speak Welsh in a way that is just irritating more than anything else.’ 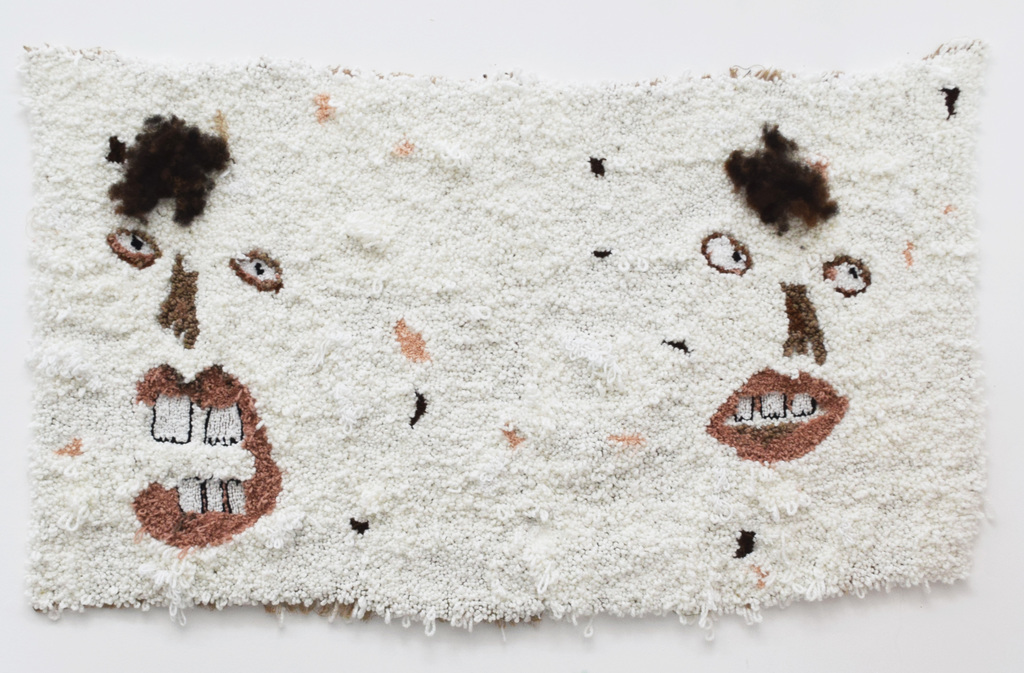 In Ni yn unig (2020), we find another Welsh title (meaning ‘only us’), and another portrait based on a family photograph – this time the artist and her sister, aged circa seven and five respectively – a work that incorporates locks of the artist’s own hair. Paintsil is interested in ‘the political nature of Black hair’, using human and synthetic versions of it throughout her work, as well as ‘Afro hair styling techniques’. ‘Again,’ she says, ‘it’s looking at skills that can be repurposed, or things associated with womanhood or domesticity that can be just flipped on their heads and put in a gallery setting and force people to view them as the art that they are […] And lots of techniques that I use in my work – like latch hooking – are the same techniques you would use to attach hair to a head.’

"it’s looking at skills that can be repurposed, or things associated with womanhood or domesticity that can be just flipped on their heads and put in a gallery setting and force people to view them as the art that they are" 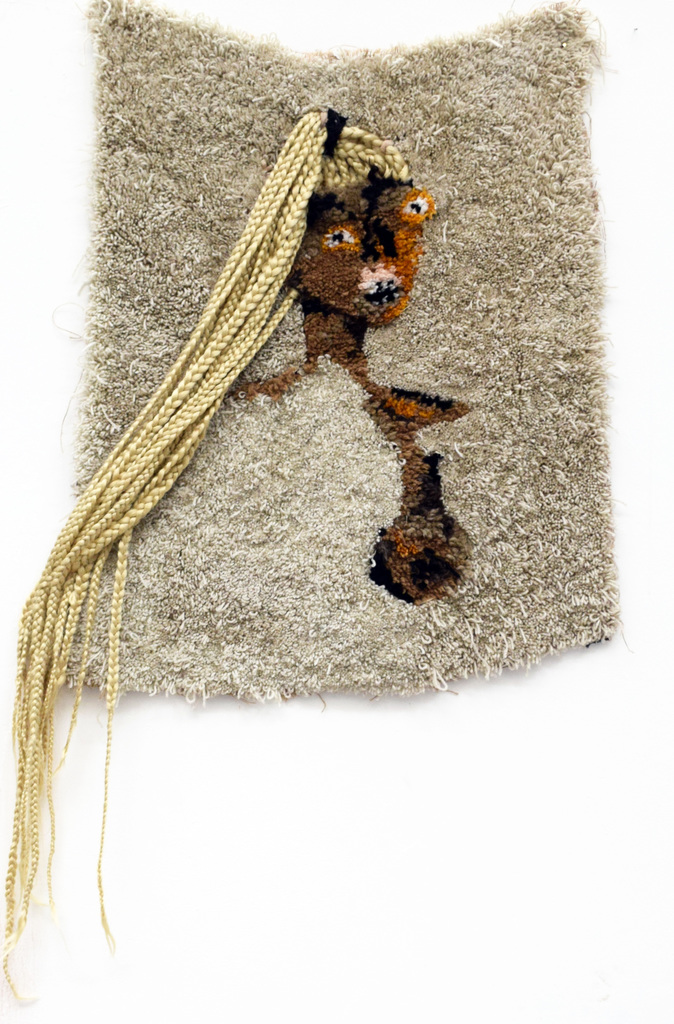 Paintsil talks also of the desire to ‘repurpose old hair pieces, which sounds really gross’ – we both laugh – ‘but I think, as many black women do, I go through a lot of human hair, a lot of braiding hair, a lot of extension hair, and create a lot of waste […] All of the synthetic hair in my work has, at one time been on my head, in a hair style,’ she explains. It goes back to her engagement with utility – what gets used, when is an object used up, what else might it be used for? From looking at the materials around her, Paintsil realised the correlation between latch hooking and Afro hairstyling, but beyond mere resourcefulness, her materials are part of her ongoing troubling of the arbitrary line between craft and art, that which is considered unworthy and worthy. She wants to allow people to look at braiding and weaving as ‘art in itself’ and to re-evaluate ‘these really creative skills, which are often just dismissed as women’s vanity, as opposed to being a big part of Black womanhood.’ 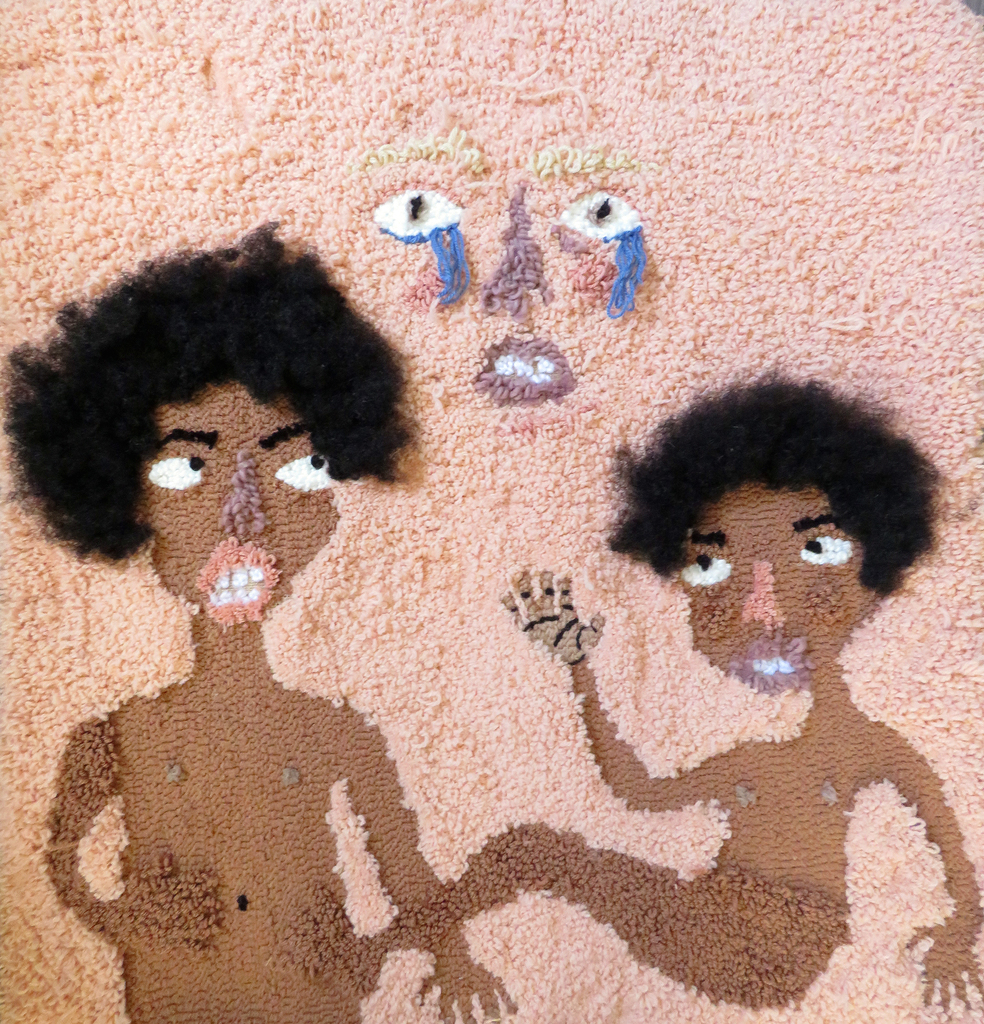 The irony is not lost on me that during all this uplifting and fascinating discussion about labour and utility a lot of invisible labour has been going on: namely Paintsil bridging differences by speaking on topics from race to geography to gender to somewhat antiquated textile techniques that I previously knew nothing about. As for her work itself, at least part of its power is making such effort visible, pulling bodies and histories both personal and political through her canvases, thread by thread.

Anya Paintsil is currently showing at 1-54