The Reality on the Ground

George Osodi’s Oil Rich Niger Delta is a rich and emotive study of communities living through poverty and political agitation along the banks of Nigeria’s Niger River, one of Africa’s largest sites of oil production. A self-taught photographer, Osodi originally worked in the financial sector, for the Nigerian subsidiary of the giant French bank, Société Générale. While working at the bank, Osodi studied photography, eventually leaving to take up a position as a photojournalist at Comet Newspaper in 1999 and going on to work for the Associated press in Lagos between 2001-2008. 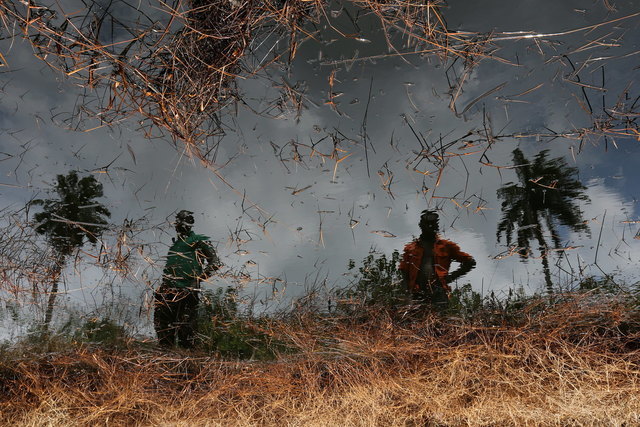 While Nigeria is Africa's largest producer of crude oil, Osodi explains, years of corruption and poor governance has left the communities living by the Niger Delta desperately poor, and its natural environment has been devastated by oil spills and gas flares. ‘The Delta region is known for its oil wealth,’ says Osodi, ‘but a lot of it does not benefit the people who live there.’ Successive Nigerian governments and international oil companies have deprived the local population from accessing the vast wealth pumped from their backyards. ‘I thought it was important that as a photographer, and also as an activist, I use my skills to highlight the issues.’

“These oil wells should have been a blessing, but they have become a curse”

The Oil Rich Niger Delta series (2003-2007) documents the impact of oil extraction on local populations: they show farmland drowned in oil, armed militia as a fact of everyday life, and people going about their daily business, drying tapioca or riding a bike, while gas flares fill the sky with flames. 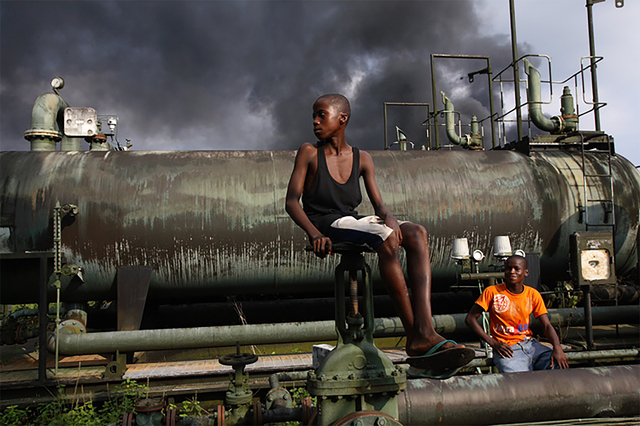 ‘In London, or New York, or Germany, or anywhere else in the Western world, people are benefiting from the oil from here,’ Osodi says. Many of the world’s major oil companies – the likes of Shell, Mobil, and Chevron – have wells in the Niger Delta. Be that as it may, Osodi says he is not here ‘to blame any oil companies.’ Instead, he wants to point out that they are stakeholders in the area and should therefore invest in its development. ‘These oil wells should have been a blessing,’ he says, ‘but they have become a curse. 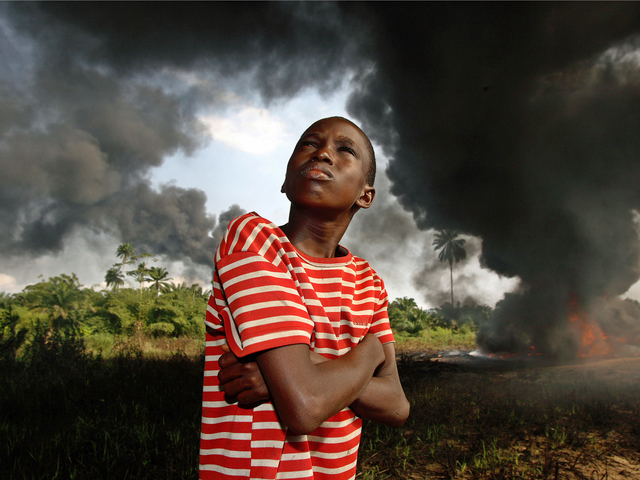 ‘The Niger delta has always been at the centre of the world economy,’ Osodi explains: it was a major route for the slave trade and, after the abolition of slavery, the delta continued to be exploited through the export of cash crops to the UK and the Western world. Then came the end of British colonial rule in the country, but the exploitation continued in the form of oil exploration.

“I put energy into images that are eye-catching and colourful but which tell the disturbing story.” 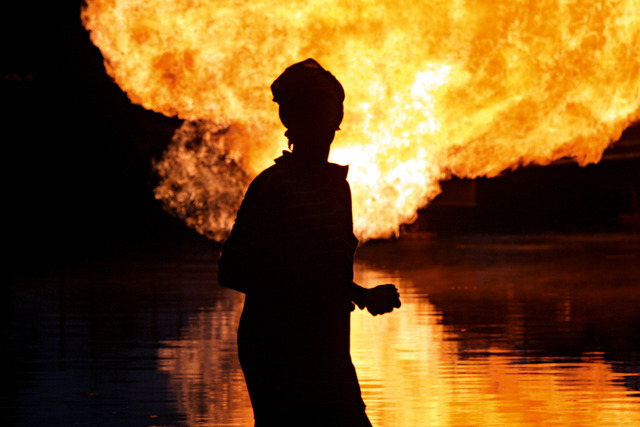 Although the activities of oil companies in the Delta are receiving less attention now than they were at the height of the political crisis in the mid-2000s, life has not improved for the people there. ‘The 2000s were the height of agitation from the people, so it was in the news,’ Osodi says. ‘Now the agitation has died down but the issues remain. The area remains dangerously polluted and heavily militarised.’ 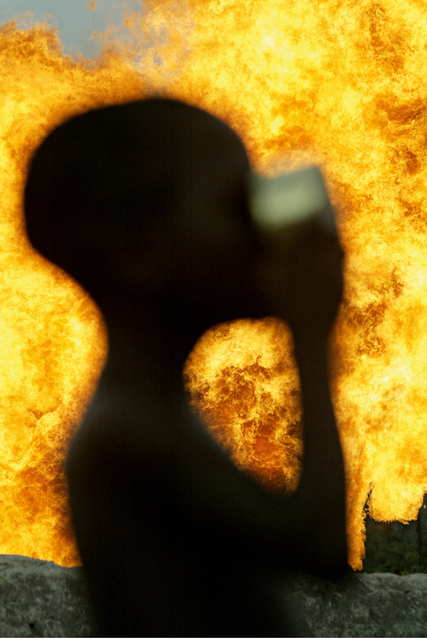 Osodi sees his work as a means of drawing attention to these issues, even while the press has ceased to report on them. ‘I try to photograph the issues in a manner that is appealing to the viewer. I put energy into images that are eye-catching and colourful but which tell the disturbing story.’ One of his photographs showing at Face to Face comes to mind: Ogoni Boy, which shows a young boy in a colourful t-shirt standing in front of a huge cloud of black smoke. ‘I took that photograph early in 2007 of the oil pipeline explosion in Ogoni land. That’s an area where Shell has huge problems with pollution. I’m trying to create awareness in the world that these things exist. I think of myself as a political photographer.’ 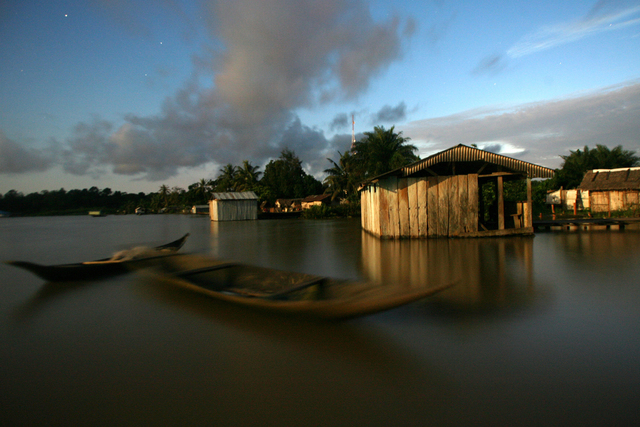 Indeed, Osodi wants to provoke people in the West who benefit from oil extraction in the Niger Delta to reflect on its impact. ‘I just want to make a case for the people of the region and expose the suffering, the hardship, and the negligence,’ he says. ‘It has been so neglected. This is just my own way of creating awareness in the rest of the world.’ 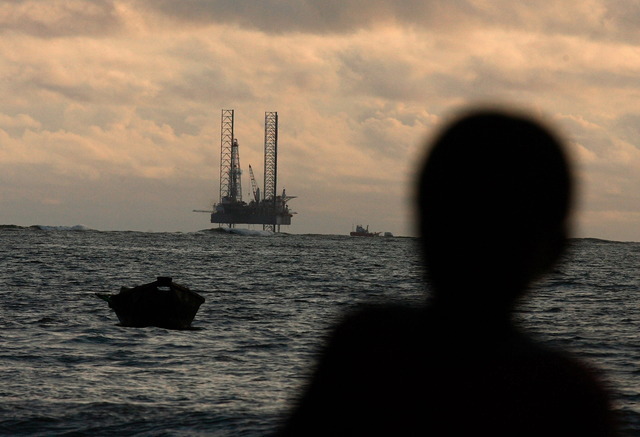 However, Osodi is humble about the potential of his work to create change. ‘I can’t do much,’ he says. ‘I don’t have authority and I’m not in power, but this is the little bit I can contribute from my own little perspective. It’s important that people in oil-consuming nations like the UK at least have an idea of what is going on in the region where the oil is coming from and know that the people are not getting a fair share. I’m not criticising anybody, I’m just trying to create a platform for people to think big about what we need for humanity. A good way to achieve that is through collective art. My images are not gory, they’re not graphic. But they’re images that show a problem that needs attention.’ 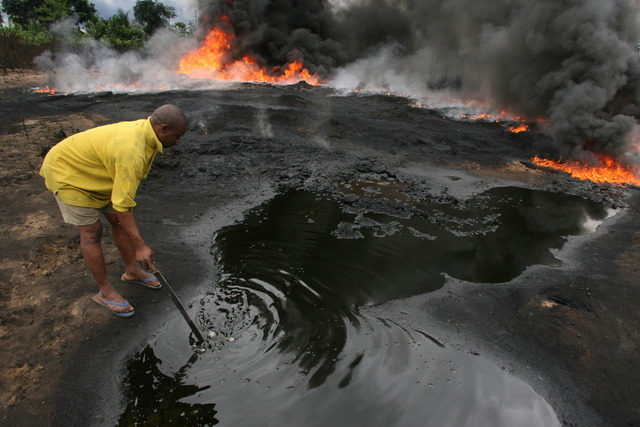 How does he feel, I ask, about these photographs showing at Face to Face, in a tunnel in King’s Cross? ‘It’s always been my dream that my work be available to everybody, old and young, rich and poor, white and brown, human beings. I want people to stand back, enjoy the work, and be inspired to think about what you can do to remedy the situation. I lived in London for eight years and I never imagined that my work would be hanging in that route.’ 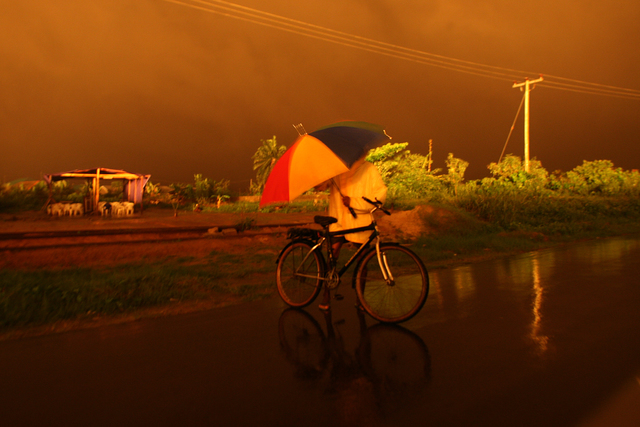 Despite the horrors he has witnessed in the Delta, Osodi sees a future for the people living there, and he believes there are political solutions. ‘The people of the Delta region were not meant to be poor but political neglect has made them poor. These are man-made issues and they could be resolved by the same people that create the problems. The people need to be respected and they need to be given their rights. They need to be recognised for producing one of the most important commodities in the world. My work is to show the reality on the ground.’

Read about how The Fund For Global Human Rights supports grassroots and community-led groups in Nigeria here.