The Power of Seduction in the Work of Mahtab Hussain

Mahtab Hussain’s Mangla Dam (2016) shows a shrine for a holy person with a soft gold domed roof in bright light. A bent nearby tree acts as its friend or foil. The pair stand in water as far as the eye can see and a muddy waterline on the shrine’s pale bricks show where it has previously risen. ‘When the water level rises, it completely takes over that building,’ Hussain said. ‘What’s interesting about the Dam is that the Raising Project is still taking place.’ As the Mangla Dam fills with sediment, he explained, its height has to be raised to conserve more water. As a result, tens of thousands of people living in the vicinity today are being displaced. 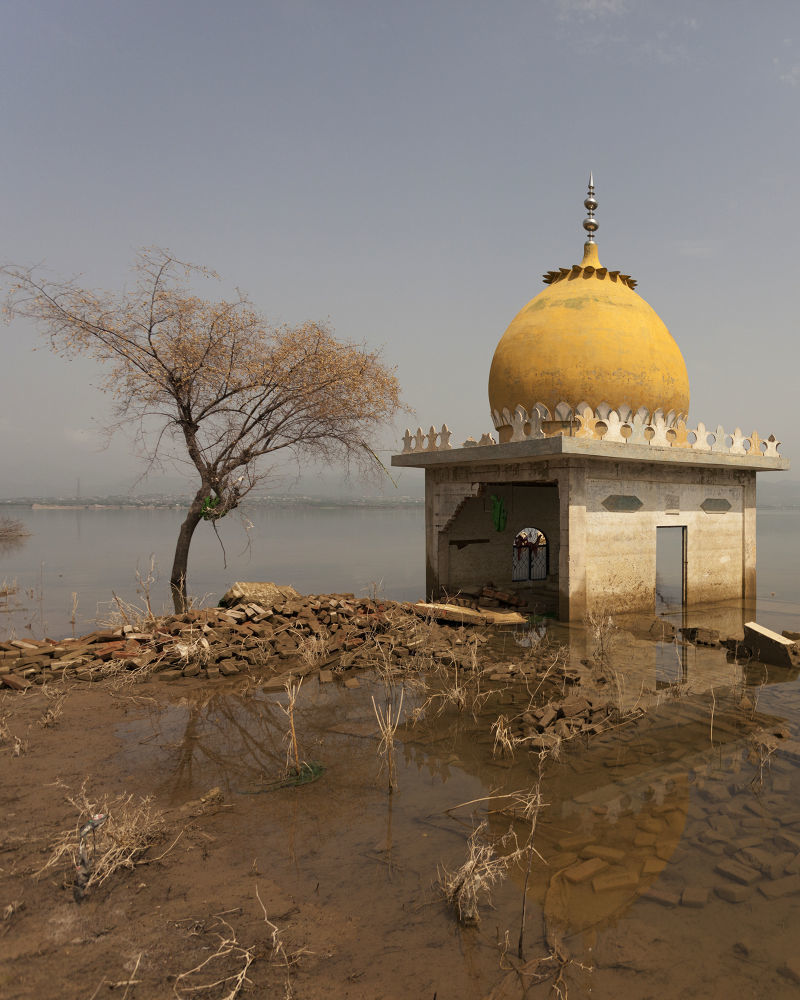 Mahtab Hussain. Mangla Dam (2016). From Going Back Home to Where I Came From.

It’s estimated that 100,000 people were displaced from the Mangla Dam area when it was originally constructed in the early 1960s, and many of them migrated to the UK during this time. Thus, Hussain’s Mangla Dam, for all its romance, has a mournful air. You could see it as a metaphor for the loss of heritage, a culture submerged and potentially erased. The image is from the series Going Back Home to Where I Came From, which explores the idea of returning to the motherland (Hussain is of Pakistani/Kashmiri heritage, born in Glasgow in 1981). The title also serves as a rejoinder to the racist comments the artist endured as a young boy when the family later moved to Birmingham (‘kids were like, go back to where you came from. And I was like, What the fuck does that mean?’) 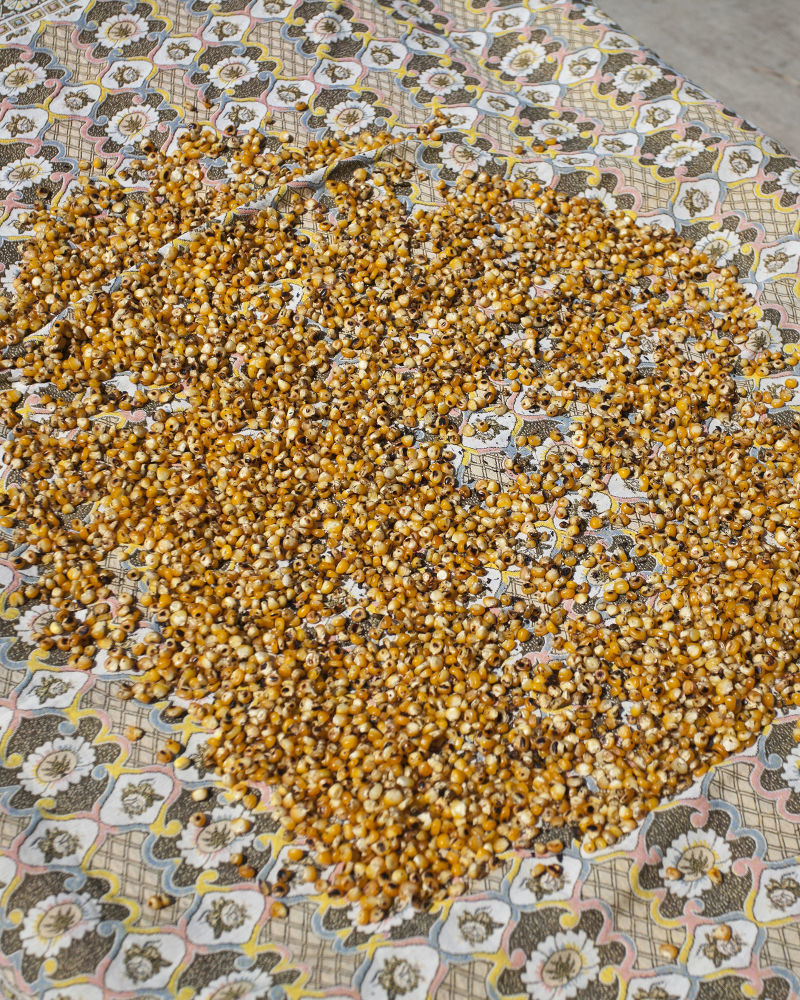 Mahtab Hussain. Corn on manji (2016). From Going Back Home to Where I Came From.

Going Back Home strikes me at various moments as candid and tactile — see Corn on manji (2016) and imagine reaching out for a handful of the kernels and running your hand over the intricate weave of the traditional Pakistani bed, or Boy with grass (2016) and the droplets of water running down his chest, the long grass brushing bare skin. But perhaps I only think the work is like this retrospectively, since Hussain was both forthcoming and evocative when it came to discussing the most intimate snapshots of his past, even painful memories: racial slurs shouted by grown men passing in a car. Graffiti sprayed on Hussain’s family’s front door. ‘There was a lot of physical violence as well,’ Hussain said. ‘My brother was a real fighter. He could take on six guys without any problems. But I was never like that. I was very gentle and very emotive as a young boy.’ 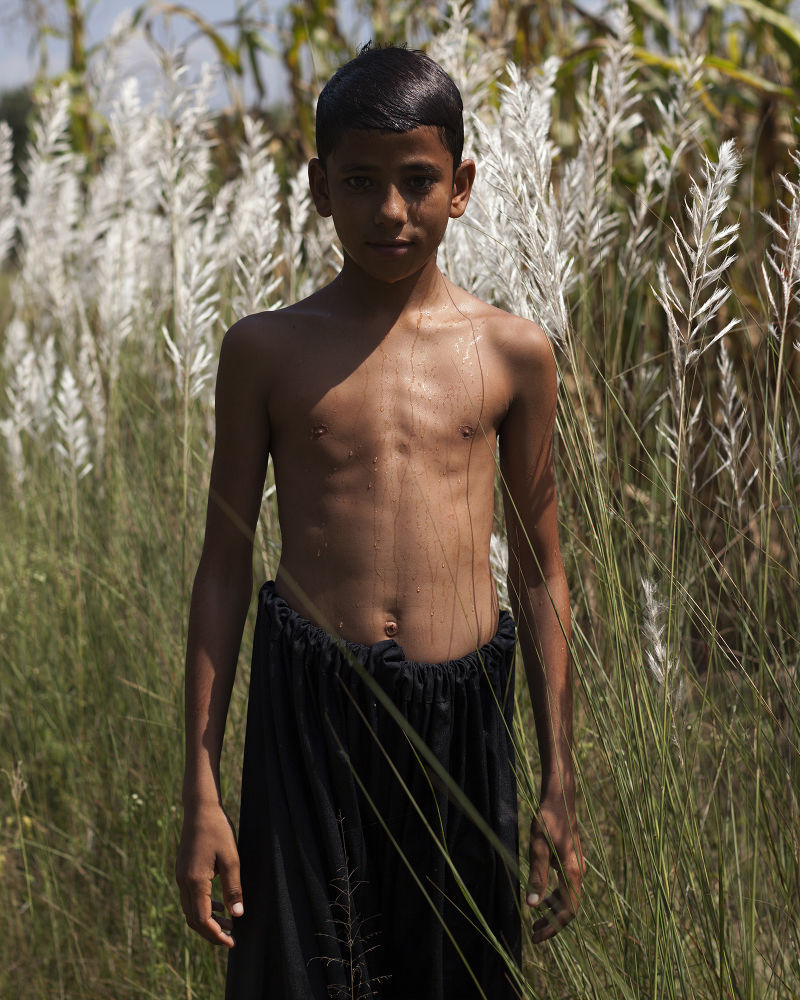 Mahtab Hussain. Boy with grass (2016). From Going Back Home to Where I Came From.

For the young Hussain, then, creative pursuits were always a welcome distraction. He described a ‘little broken Kinder toy’ with which he’d pretend to photograph his siblings in the garden. Being engrossed by the Discovery Channel. Flicking through family albums, wherein the photos are ‘all blurry and the flash is wrong’. A little later, upon discovering competitions and fashion photography, he said, ‘I just fell in love with that pure quality — that beautiful, finished quality that looks just perfect. The light and the shadows — and obviously beautiful people — and I just thought, man, I really want to do this.’

“Who is this person in front of me and why are they depicted on gallery walls or in a beautiful book?” 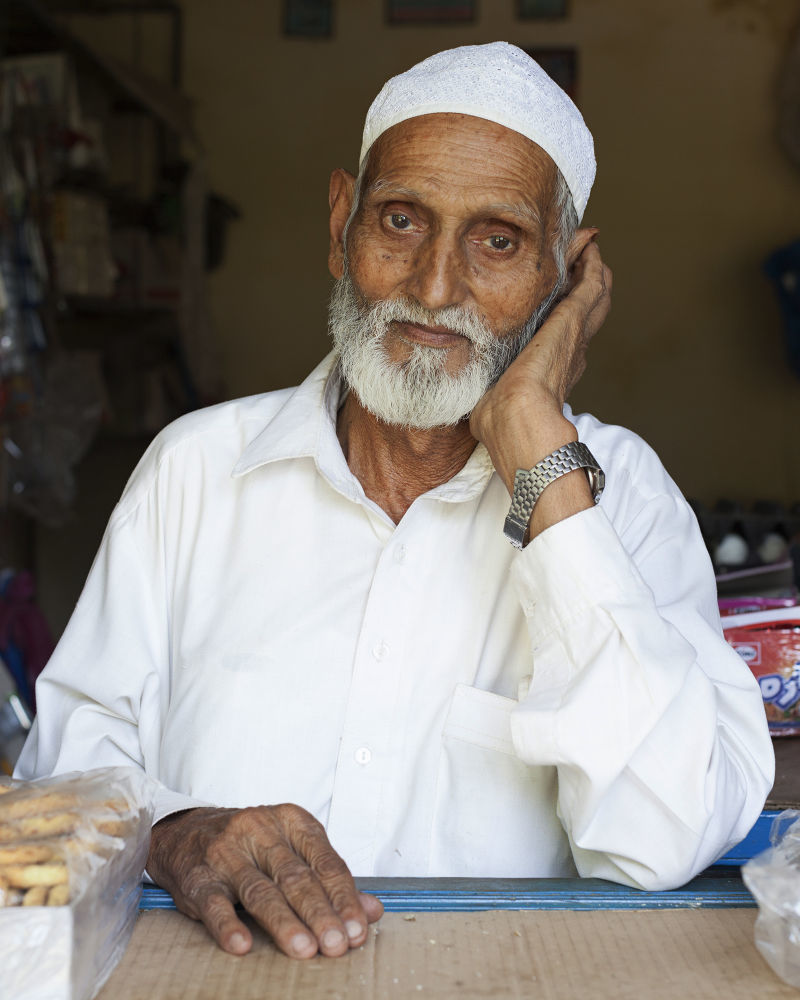 Mahtab Hussain. Shopkeeper near my mother’s farm (2016). From Going Back Home to Where I Came From.

It wasn't the last time during our interview that Hussain mentioned photography in the same breath as falling in love. ‘I absolutely fell in love with the dark room,’ he said, then promptly put me there with sensory detail: ‘That tactile quality of touching the developer and allowing it to stick to your hands […] It’s got this kind of vinegary, stale smell’. He went on to describe the ‘romantic quality’ of ‘being in a very intimate, dark space and seeing your negatives come alive.’ As drawn in as I was, it took me a while to realise just how important romance and seduction is to Hussain’s practice. 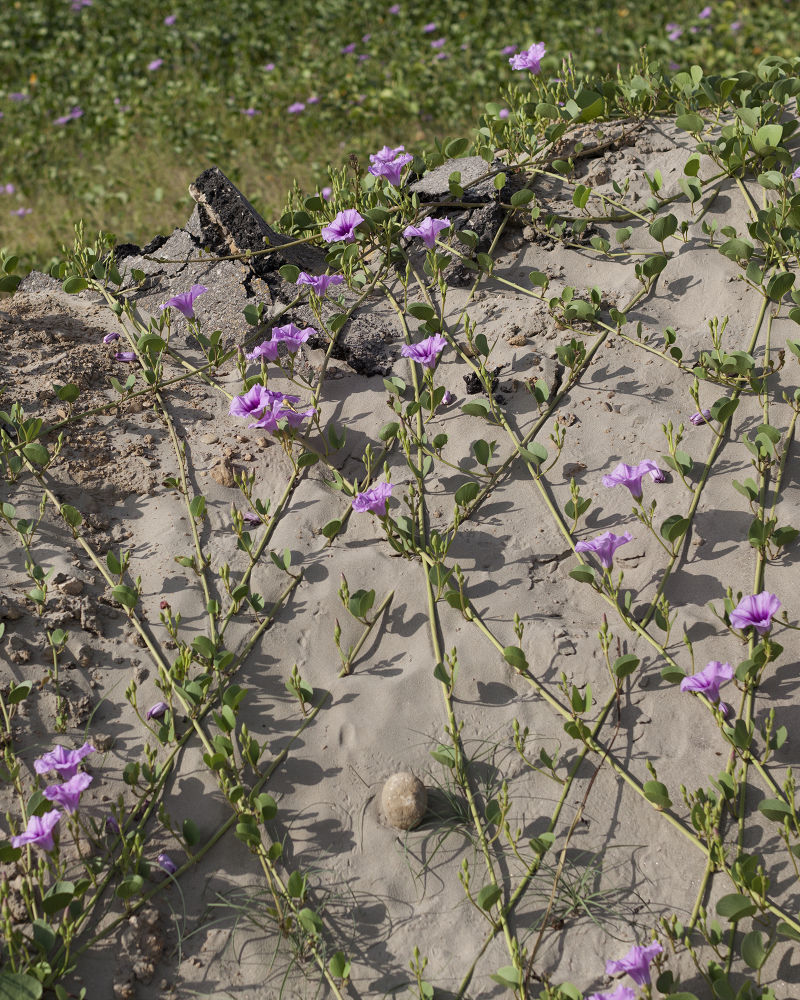 Mahtab Hussain. Climbing plant on broken road (2013). From Going Back Home to Where I Came From

The artist described working at the National Portrait Gallery in his twenties, where he would walk through the empty space hearing the echo of his own footsteps, ‘and I would be met by all these gazes. The power of those gazes made me feel incredibly insignificant as a spectator. But it also made me realise just how powerful it was to have that direct locking of the eyes. I wanted some of that power, because it’s seductive. How do I hold myself like that?’ 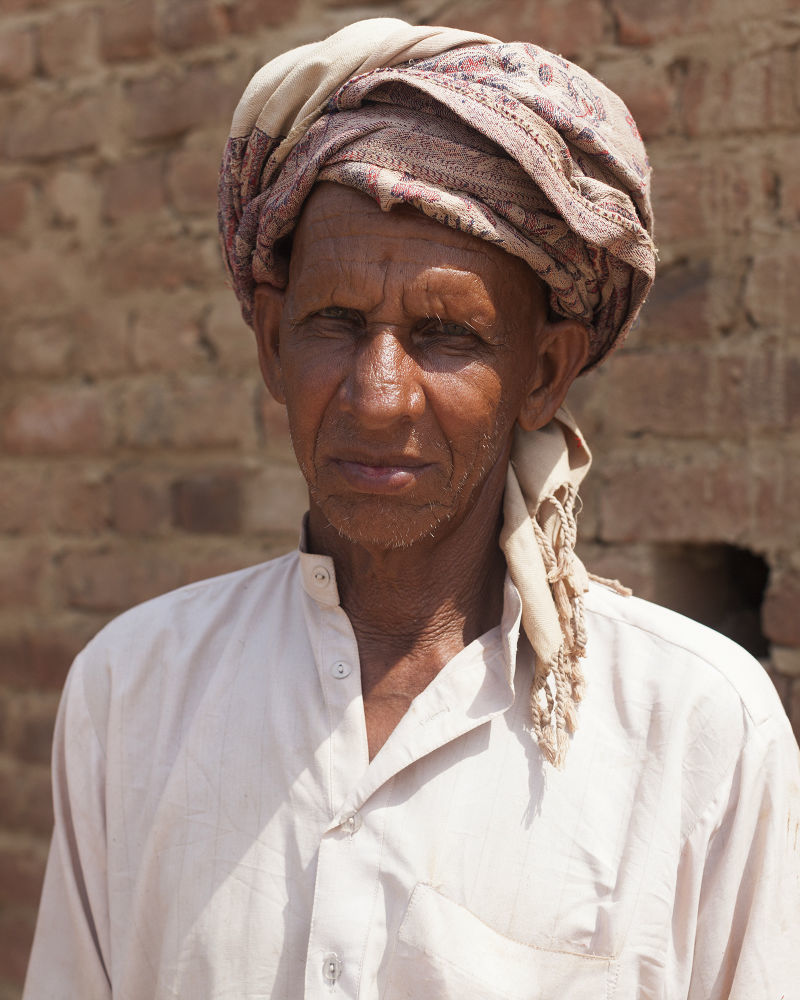 Mahtab Hussain. Brickmaker (2016). From Going Back Home to Where I Came From.

“You play with the same power that played on you.”

There is a Moroni-like swagger to Hussain’s The Surgeon, which showed in Everyday Heroes at the Southbank Centre in 2020. The surgeon is venerated by a delicate gold leaf border. In his hand, like a sceptre held by an ancient king, is a stapler used for keyhole gastrointestinal surgery (think: costly/functional.) Whether at street level looking up or sitting before a laptop, as I am now, the surgeon appears to be look directly at me. ‘The locking of the eyes [with the lens] is really important to my portraiture because it gives an unspoken quality,’ Hussain said. ‘It really makes you reflect as a viewer. Who is this person in front of me and why are they depicted on gallery walls or in a beautiful book? It’s about having that conversation with yourself, as all your biases rise to the surface. 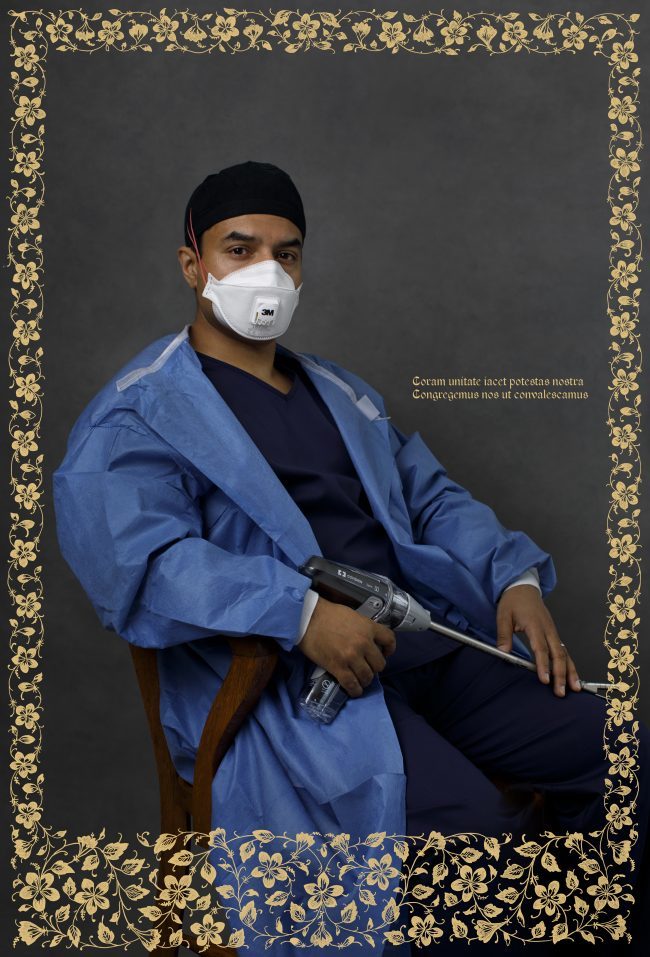 ‘What’s really important for me when I’m finding a sitter is the idea of you having to fall in love with them. So, with You Get Me? [Hussain’s first series, which explores identity among young British-Asian men] and with Going Back Home, every time I connected with someone, there had to be this attraction,’ Hussain said. ‘When you’re attracted to someone, it’s mainly because you want something from them, they’ve got something you don’t. And so, with my work, I always try and empower the sitter.’ Indeed, the surgeon commands his portrait with an almost ineffable combination of posture and facial expression – even behind a face mask. 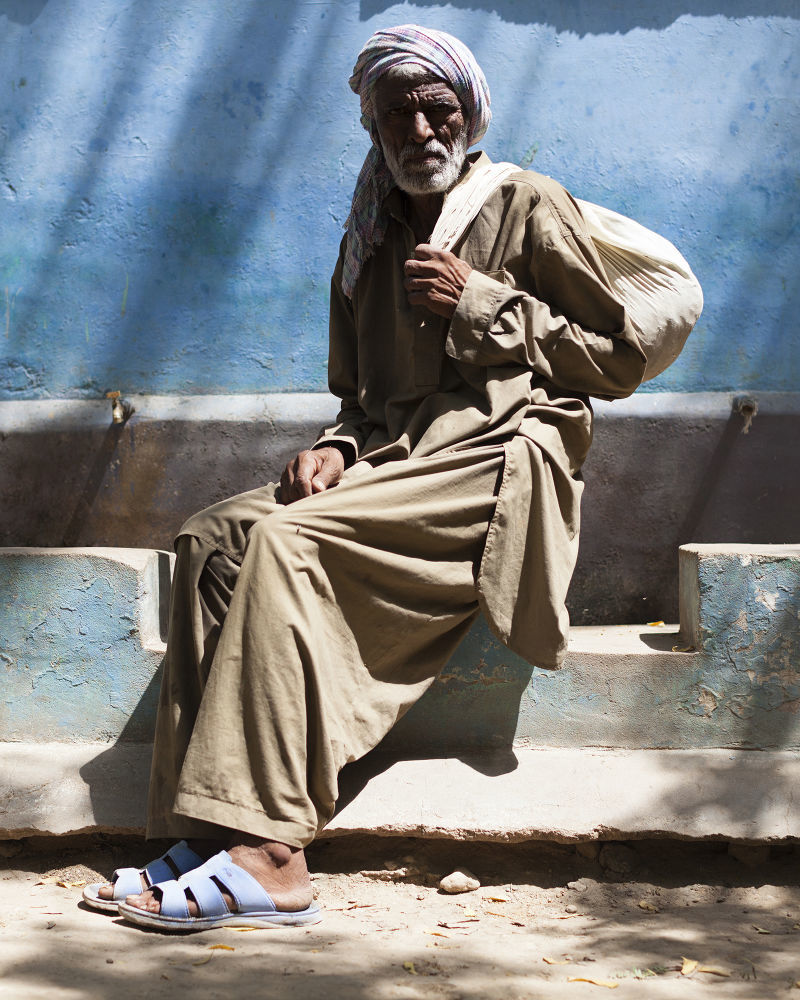 Mahtab Hussain. Man in cemetery (2013). From Going Back Home to Where I Came From.

But what about when his subject is a place? When Hussain described making Going Back Home, the project sounded similarly like an act of love, an attempt to make immediate and vital a community and a landscape that, in turn, had a certain power over him. ‘The heat was amazing — it was a dry heat — and my body just felt amazing. It felt like it belonged there, physically, and I can’t quite describe what that did. But, everything just sat right. The food has this taste that I had never experienced before. And there was this kind of huge weight that was lifted off me, and I really felt I came home.’

Hussain said the ‘experience was amplified’ because he met cousins and aunties for the first time. In Mirpur, he stayed with his extended family in a house that had a courtyard in the middle, through which ‘the birds would fly in and out, tweet and chirp’. ‘The electricity would go off at night,’ he said, ‘and we’d all gather in one room. [My family] loved telling stories about what they did growing up, what my mum and dad did. We went to the village where my mum grew up. We drove for a few hours, and I kept asking them to stop, so I could go out and photograph the landscapes, feeling the breeze and seeing the richness of the trees. It was really paying homage to my mum’s memories. Everything she spoke about. I was living through her experience. Walking through the cornfields that she would have ran through as a little girl, swimming in the river that she told me about. 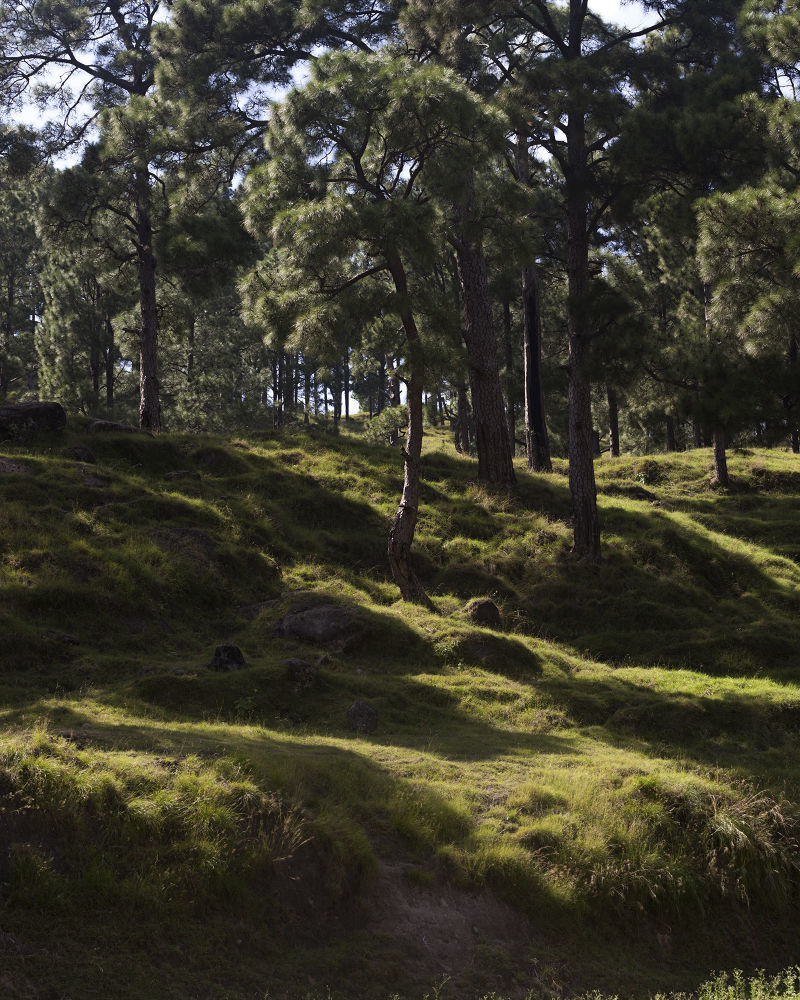 Mahtab Hussain. Forest in Suwana, Kashmir (2016). From Going Back Home to Where I Came From.

‘It was political as well,’ Hussain said. ‘The work was definitely political but with a small “p”. I just wanted to experience my motherland.’ I ask him about that small “p”. ‘When you think about Pakistan,’ he said, ‘as a British-Asian, you think about how it’s positioned within the Western framework. You think about conflict, about violence. You think about people suffering immense poverty, desperate to come to countries like England to exploit the system and whatever else. That’s not the case. It is so rich and diverse and nourishing for the soul.’ 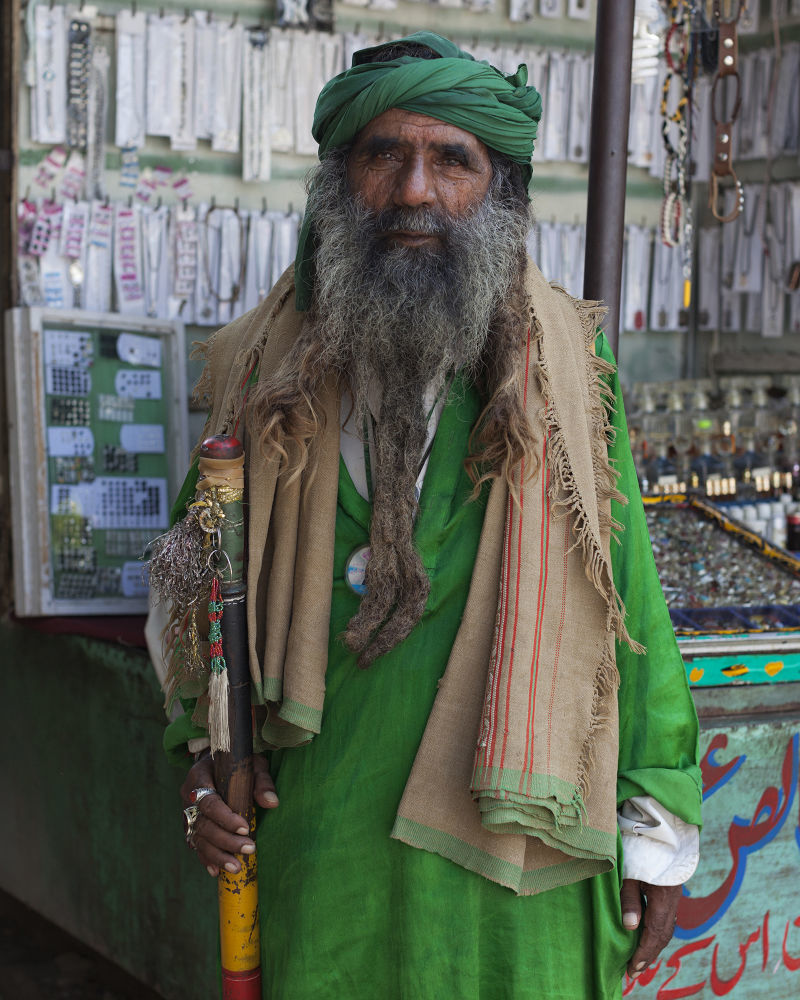 Mahtab Hussain. Holy man (2016). From Going Back Home to Where I Came From.

If his work challenges and shifts our attitudes, does Hussain think photography is activism with a small “a”? ‘I think art is, generally. I think art is activism’, he said. ‘Visual culture is the most powerful medium, right? Advertising is the most powerful medium, because it does change people’s perceptions. So, I use photography, because I know the power of it through popular culture and how that shaped my understanding as a young boy.’

‘Right back to the Discovery Channel,’ I suggested.

‘Exactly. You play with the same power that played on you.’

This, or hereabouts, I sensed, would be a neat place to leave our interview, but I fumbled through one final question. ‘Covid-19 has exposed numerous social inequalities, and-’ – I was rendered somewhat mute by the seeming hugeness of my question – ‘well, what can we do about it?’ 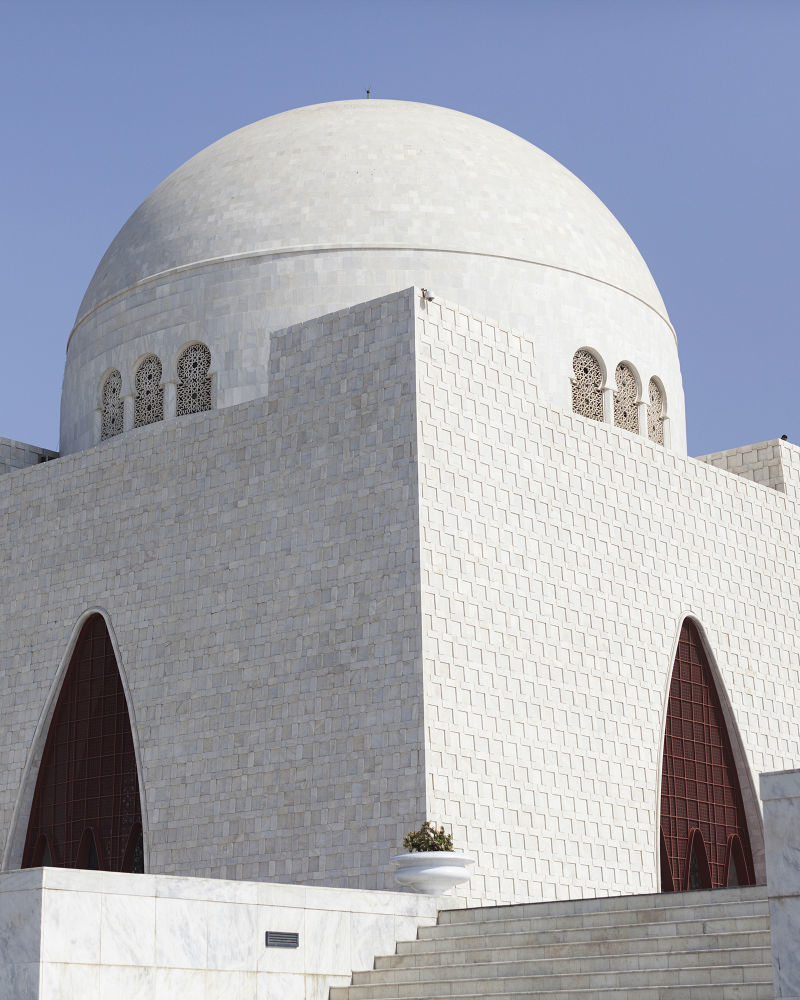 Mahtab Hussain. Jinnah Mausoleum (2013). From Going Back Home to Where I Came From.

‘I mean, it’s really hard,’ Hussain said. ‘When you really think about trauma and indifference and the struggle that my community and people within the Black community – what people who are different – have to deal with. It breaks you down.

‘Yes, you can have these grand dreams of changing society — and I think we will — but you can’t do it in the future. You have to do it being present. And that’s what I’m always trying to do. I’m just trying to be present and to take it one step at a time. And, with each project, trying to just edge it forward gently. And that’s it, right? That’s all I can do. Ultimately, yes, I’m an artist. Yes, I’m an activist. Yes, my life is political. But all I’m really trying to do is tell a story.’