Osman Yousefzada, Being Somewhere Else at Ikon Gallery

Osman Yousefzada is celebrated for his sculptural designs and bold use of colour and print. His designs are worn by musicians and activists including Beyoncé, Lady Gaga, Emma Watson, and actors such as Kirsten Stewart, Emily Blunt and Thandie Newton.

If you move somewhere else, how do you physically inhabit that space? 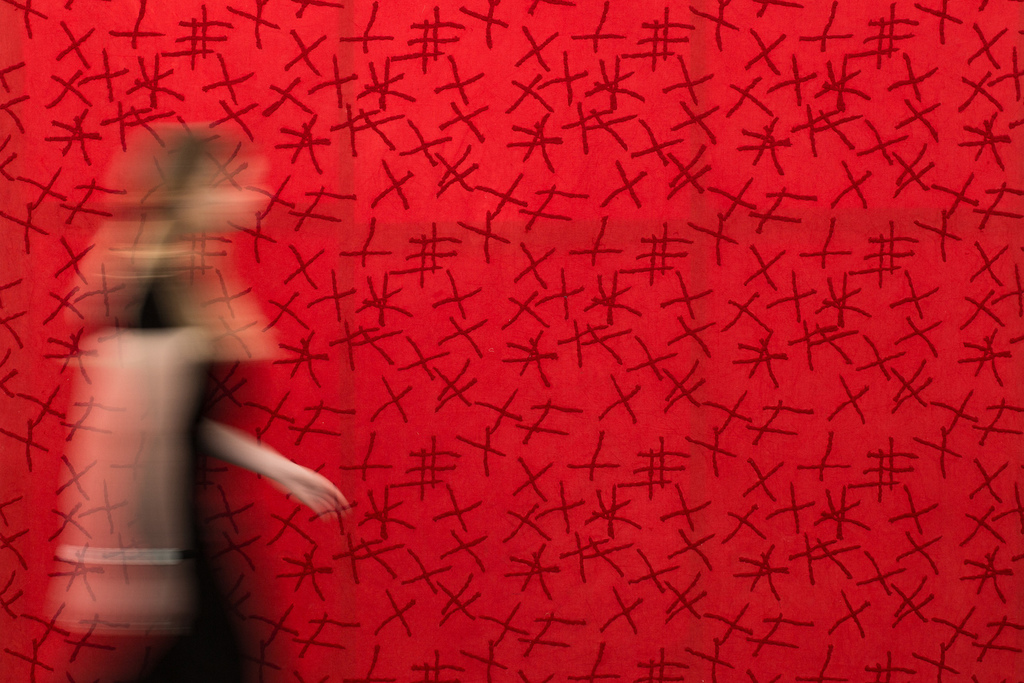 His success comes despite – or perhaps because of – the fact that there has never been anything conventional about Osman’s life and work; when he was initially approached to put on an exhibition at Birmingham’s Ikon Gallery, celebrating ten years of his designs, Osman wasn’t keen to “do [a] conventional fashion exhibition.” As the project developed, the designer composed installations exploring his personal stories of growing up in Birmingham and universal themes of migration for his exhibition ‘Being Somewhere Else’. Being physically, I ask, or simply in your imagination? “That’s the whole question,” Osman tells me. “If you move somewhere else, how do you physically inhabit that space?”

Space, in the form of Yousefzada’s childhood home in Birmingham’s Balsall Heath, became the starting point for his creative process in assembling the exhibition. It was from that house that his Afghani mother ran a dressmaking business and where Osman learnt to cut patterns, to source trims, fabrics and haberdasheries. The culture of the 80s, traditional Muslim values and female domestic space all had to be navigated under that roof. Now that Osman has opened his own townhouse in London’s Percy Street, it’s perhaps inevitable that the boutique has become not just a home to his fashion collections but a cultural space to host readings, talks and events – it also serves as an art gallery and bookshop. 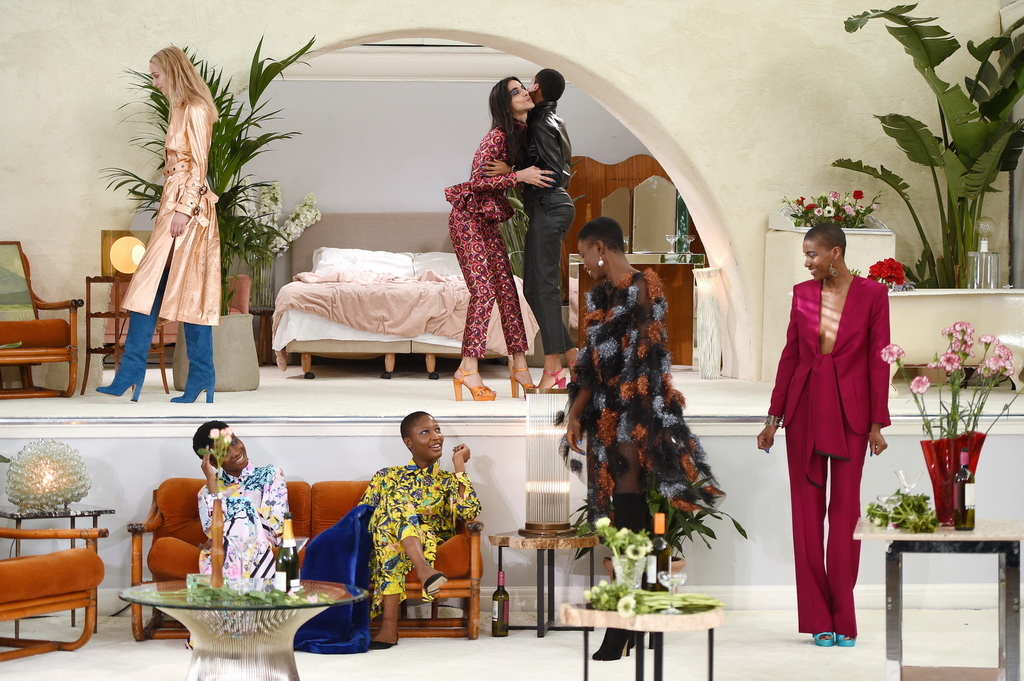 To coincide with his Ikon exhibition, Yousefzada curated a four-day festival (14-17 June) fusing themes of migration, fashion, art and music. From a fashion parade through the center of Birmingham to a night of reggae and disco at ‘Diaspora Disco’, film screenings and talks with Vogue and fashion activist Caryn Franklin, The Migrant Festival was a celebration of Birmingham’s diverse communities. Osman’s role as curator and designer continues with ‘The Collective’, an annual publication which brings together artists, writers and designers from diverse disciplines and backgrounds. 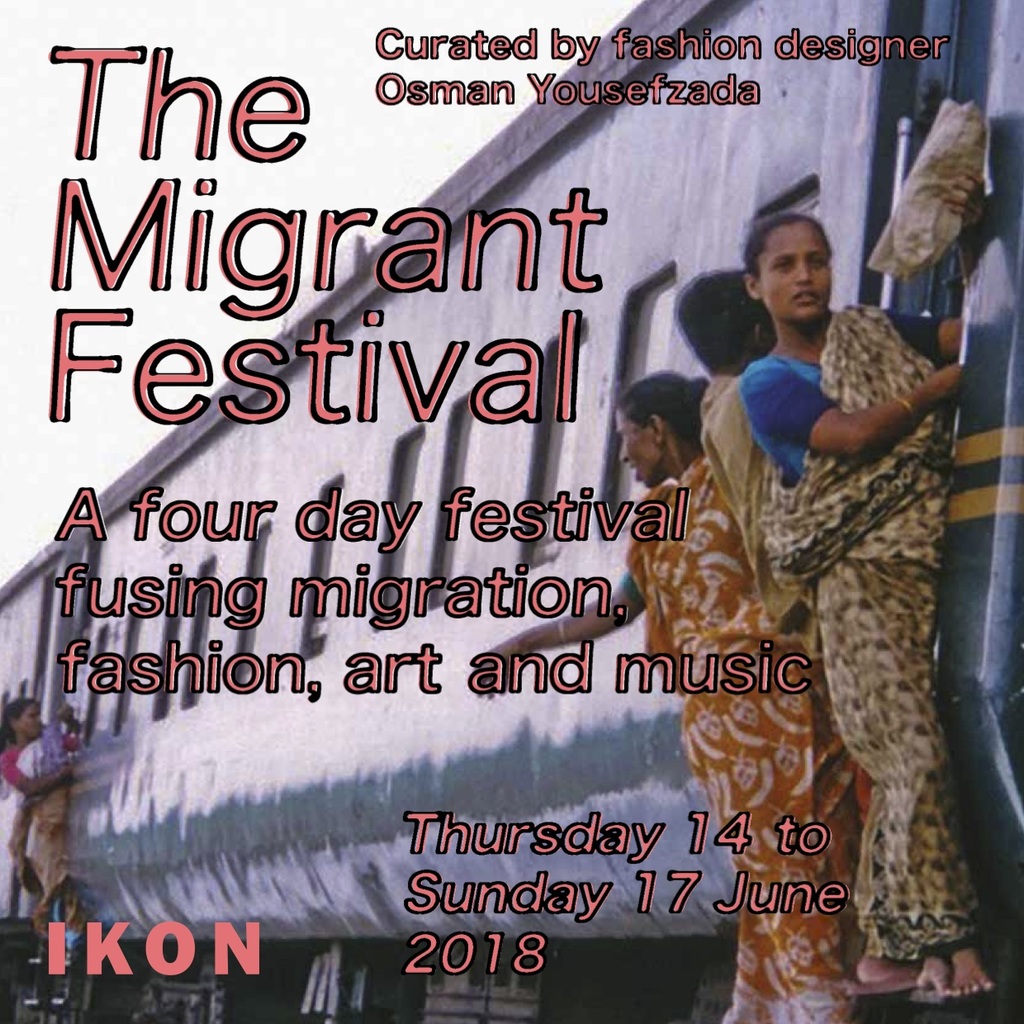 Over the past year, Plinth has been working with Ikon’s Jonathan Watkins and Birmingham artist Gillian Wearing; it feels as if this is an exciting time for creativity in the City – has this been your experience?

I was born here so I grew up in a very multicultural society, whereas my parents grew up in the countryside in the border regions in Pakistan (father) (mother in Afghanistan), my father moved here for a better life and my mum followed. I think there is this whole idea of a community melding together, which is quite an interesting thing really. The struggles of a woman – there’s an extra layer when you put (Afghani/Pashtun) culture on top of that. The struggle of a woman in her space, in a patriarchal society, is at a turning point. There are more and more role models coming through and beginning to get a voice.

Do you feel that traditional domestic spheres, for example cooking or sewing – are now spaces where women can work as entrepreneurs and designers?

There have always been male and female roles and there is still that glass ceiling. It has taken a long time and we should really embrace whatever change we have. We’re lucky to live in a culture where it’s much more democratic and you can still dream… I was completely dumbfounded when I was in Dhaka (Bangladesh) in January. I interviewed this series of women who were garment workers and I asked them to think what their dreams were – the notion that we have of dreams in the West, where you can dream of being anything, is completely the opposite there. There’s a price to dreams, they won’t dream above their station.

Tell me about the show and the spaces you have created.

Most of the show is really about the female space. You still have some male space, as in ‘Cupboard Love’, which is a walk-through installation with a cupboard full of household objects – which can also be seen as objects of domestic violence.

So little has been talked about regarding the female role in migration – especially where we come from in Birmingham, there are such diverse cultures that have arrived here through migration where patriarchal societies are transplanted into a different culture (not that the host country doesn’t have its own issues). It’s a narrative about the female space and the whole internal migration story of never really being able to enjoy what you have. As the first generation you are always the sacrificial one and you have to bear fruit.

It’s a narrative about the female space and the whole internal migration story of never really being able to enjoy what you have. 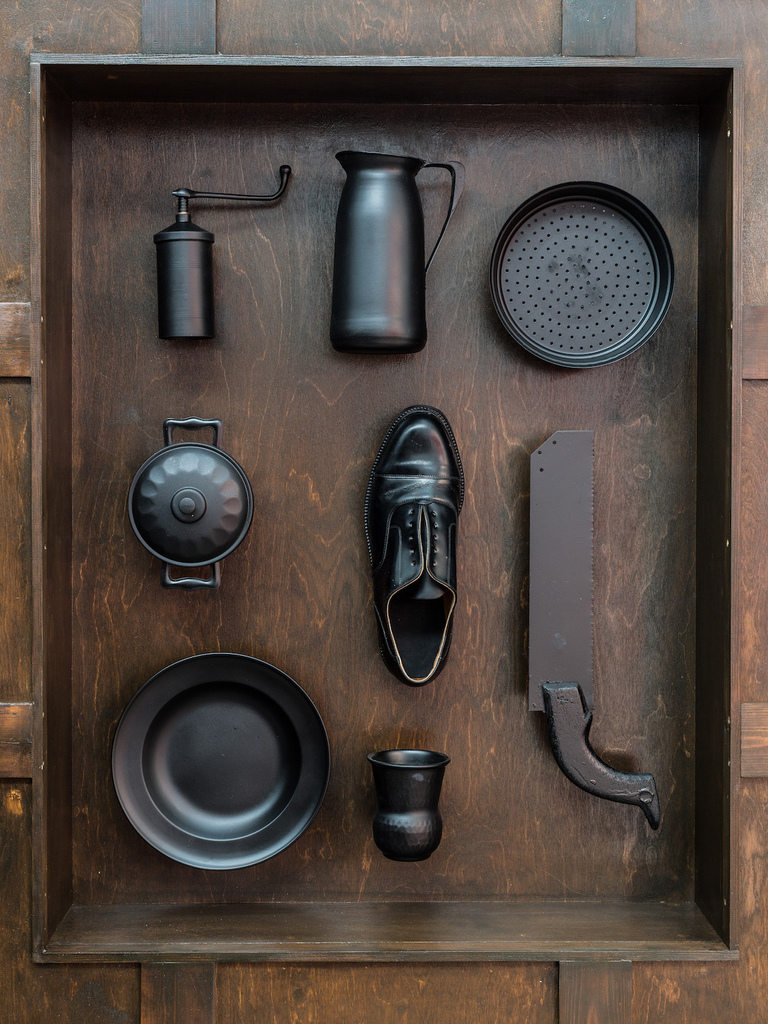 As a refugee, what do you remember and what did you leave behind?

Food is so key; that whole idea of group eating… Those (Eastern, where the extended family and community still prevails) cultures are very much about abundance. Where my parents come from is a very rural area, so it’s all about a sense of hospitality, which is quite ingrained – no one can be in your home without being fed, even when you have very little.

What did you learn from your mother, who was a dressmaker?

All these women in Burqas, from all over the Asian community, would come into our house and unravel themselves and get to sew things. It was super-fascinating and I was really intrigued – there were these women who were covered and strong. The male space wasn’t as colourful, the men didn’t wear colourful clothes, they wore conventional colours. I was always attracted to colourful silks and exotic fabrics… it was a jewel box, but it was quite hidden; a Pandora’s box. I couldn’t really occupy that space much beyond 12 or 13 – and then I found my other role, becoming their trims, fabric and haberdashery buyer from the age of 12.

Where did you grow up?

Growing up in the 80s and 90s it was the most intense place – Balsall Heath was the biggest red-light district area in England, with over 500 women working the streets, there was drink and drugs. Kids would go out and play and then easily get into the gang culture. I had a brother who was fifteen years older than me so he could navigate the area, but my mother always said to us, “Stay in! You have to stay in!” I was happy to stay in if she let me learn, focusing on her work and seeing what she was doing. I was the black sheep and liked crossing over ‘conventional’ roles of what was expected of young boy. 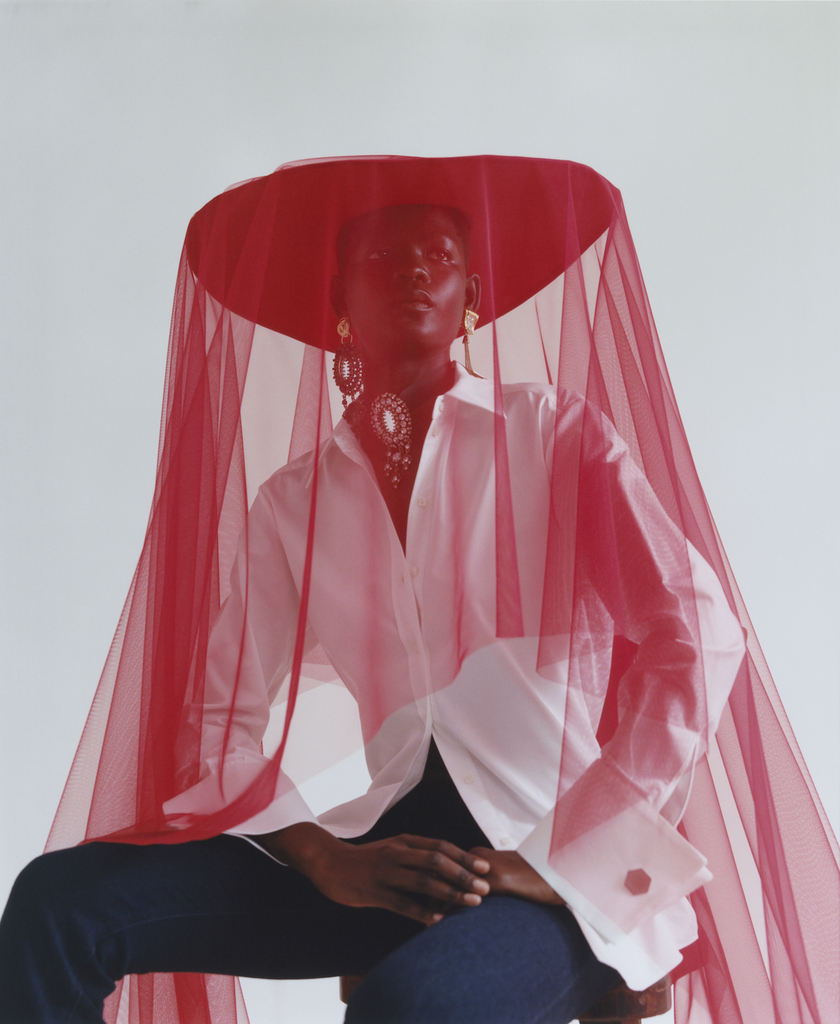 This year celebrates a decade of your eponymous label Osman – can you describe how you started out?

I was working for other people as a designer [before starting ‘Osman’]. London is very much set up to start your own business straight out of art school; it’s a place of dreams in the fashion landscape. There are so very few places in the world that allow you to do this and it’s because there is a really good support system. We have just opened a space this April – it’s a townhouse and gallery just behind Charlotte Street Hotel.

When you started planning the Ikon show, what did you have in mind?

I really didn’t want to do that conventional kind of fashion show. What I wanted to do was look at the other side of fashion, away from the allure and the glamour, taking the lid off it. The underlying strength of a woman, how she faces the world, that is what my clothes are about. It was my story as well and it felt quite personal in that way. I felt I had something to say, coming from quite a unique place. It was the capacity to dream. The price of dreams.

Tell me about the project where you found clothes in charity shops that had been made by women in Bangladesh and then you travelled there to meet them?

There is fashion in there, a conversation about fast fashion. These people [women workers in Bangladesh] are people, that relationship between the maker and the wearer, that was the narrative – and I wanted to get them to imagine who they were making clothes for. And then it really becomes a very female space and I wanted to explore those marks that are left by woman who are not colourful and adventurous.

What is the experience of migrant workers?

I feel like the whole thing is about migration, they migrate from rural areas and villages and they face some of the most horrendous abuses – sexual harassment in hostels, which are filled with bunkbeds, with a hundred people to a room; it’s a bit like factory farming in a way. There is this part of fashion, which is alluring and glamorous, but I always want to know what’s behind everything.

My mum preserves her space [her bedroom is depicted in the exhibition] by wrapping a lot of her possessions in plastic, she doesn’t really seem to enjoy the things she has. She puts everything away – it’s quite embalmed and Egyptian. Being able to enjoy something in the fashion sense – where everything is very immediate – is very alien. You save.

I took a curator around to see my mum, who immediately started asking her “What do you do and how many children do you have?”. I didn’t try to explain, I just tried to translate. 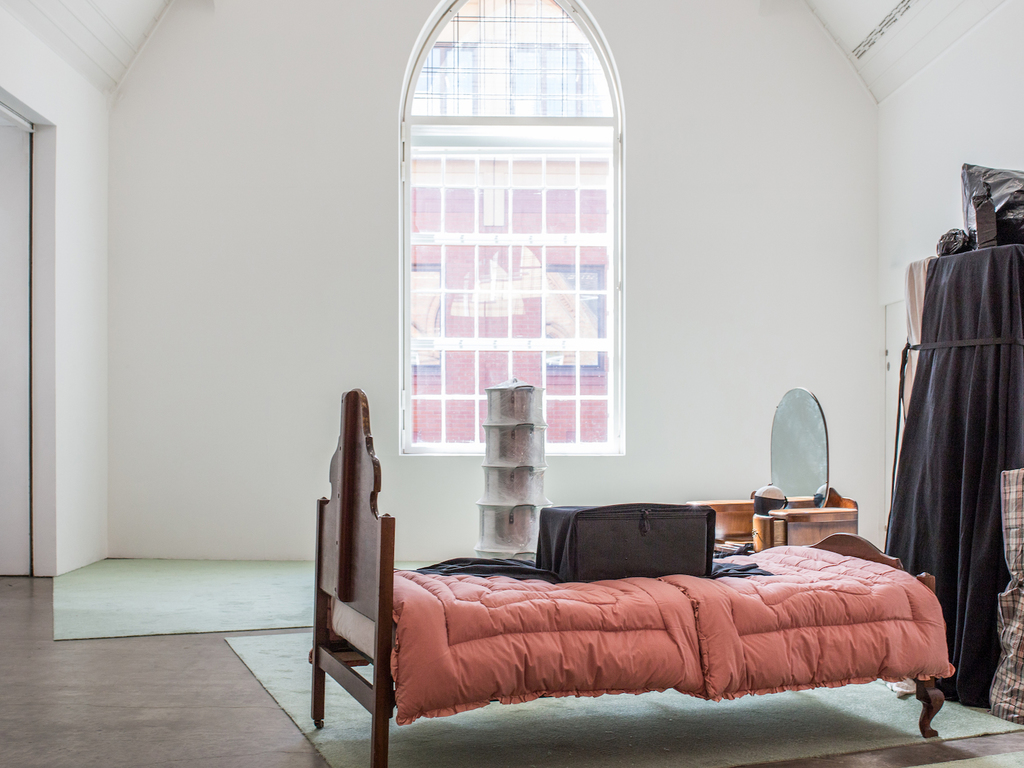 Can you tell us about ‘A Room of Her Own?’ It’s a re-imagination of your mother’s bedroom...

It’s a take on Virginia Woolf’s ‘A Room of One’s Own’ – but it’s not such a rarefied air, it’s universal. Katie Roiphe wrote the catalogue essay about the bedroom I created and about the idea of how you move from one space to another. One generation somehow surpasses the other generation in terms of advancement and different kinds of attitudes, but that is magnified when you are a migrant woman. I took a curator around to see my mum, who immediately started asking her “What do you do and how many children do you have?” I didn’t try to explain, I just tried to translate. She asked the curator what her job was, she replied I am a curator and work in the arts. I was trying to explain what art was and I couldn’t explain it.

Tell me about the title of the show, Being Somewhere Else.

That’s the whole question – if you move somewhere else, do you physically inhabit that space? Some people can navigate that space successfully, but lots of people can’t. You carry things around with you.

The journeys that you have, the aspirations of someone who is born and brought up here – they may not know anything else, they feel grounded, they feel British, they feel English – but when you throw something else in the mix, it becomes much more complicated. There are universal themes of progression, but certain things are much more highlighted and brought to the fore such as work and sacrifice, stuff which is much more of an ethos of the migrant people. We act much more in code than we let on.

Thanks so much Osman and enjoy the festival!

I now need to find a barber to get a short, back and sides ready for the parade through the centre of Birmingham. I have to cast the models and have to look half decent! 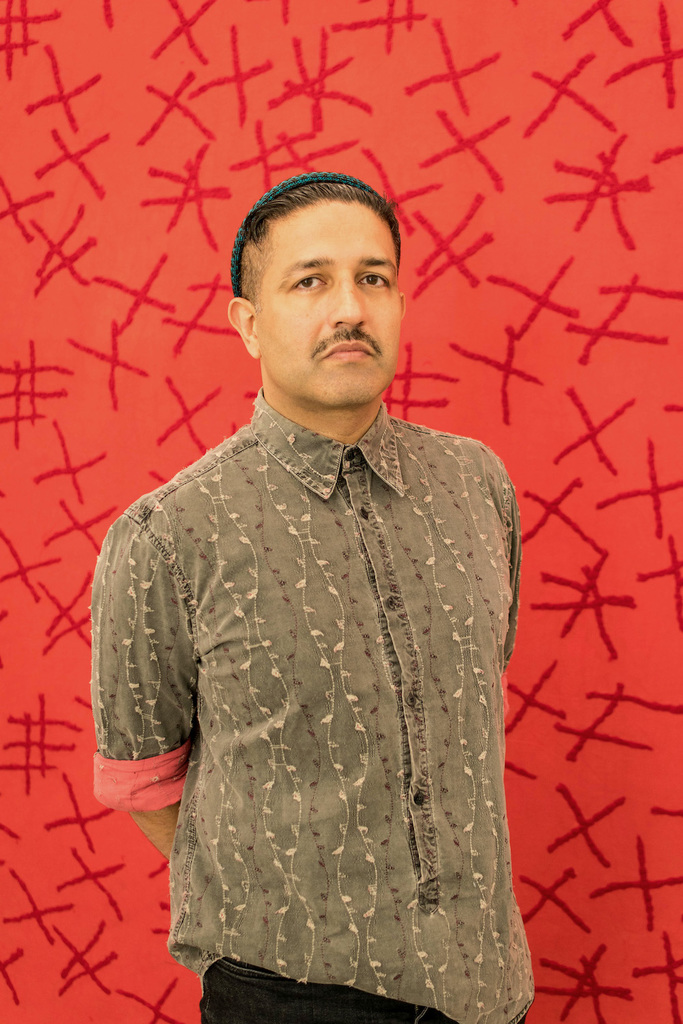