My last visit to the studio of Mit Jai Inn in Thailand was in February 2020, a month before England went into its first national lockdown due to the coronavirus pandemic. There, surrounded by palm trees, the sounds of cicadas, and his vibrant artworks, we could not have felt further removed from the turmoil that the pandemic was starting to unleash across the world. Looking back, it almost feels like a dream, in which travelling more than eight thousand miles to talk to Mit about his life and work was not only feasible but vital in laying the foundations for this exhibition. 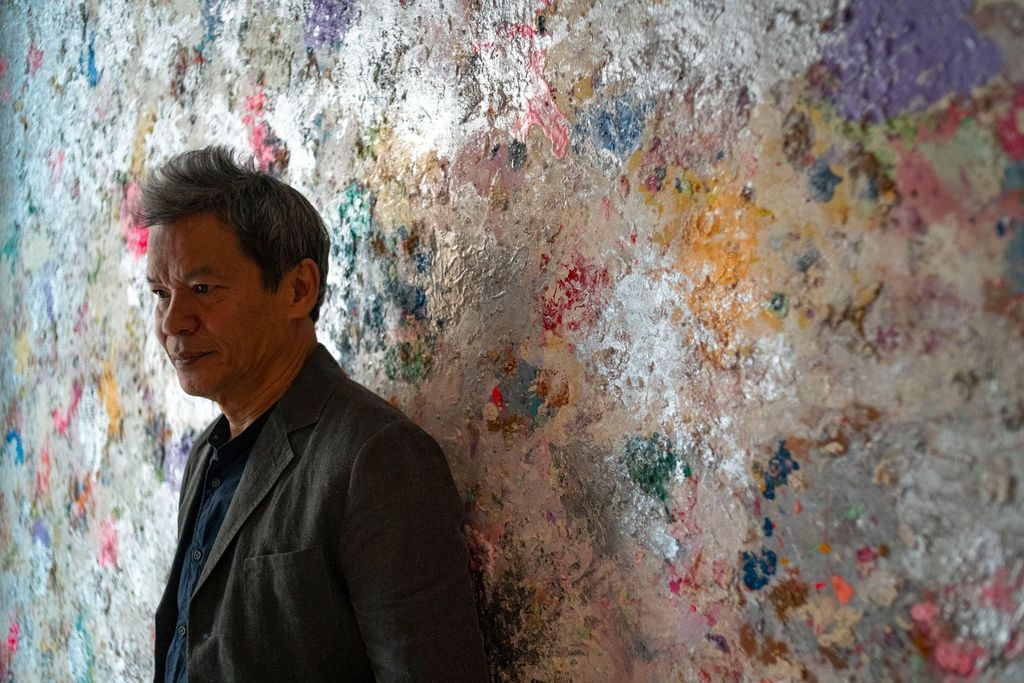 "Standing amidst these and other works by Mit, one easily succumbs to their enchanting effect, their vivid colours and energetic arrangements giving them what he and others describe as ‘healing’ properties"

More than one year and many video calls later, Ikon presents Dreamworld, the artist’s first major solo exhibition in Europe. It arrives in the midst of the ongoing pandemic, like a brightly coloured beacon signalling hope for a future beyond it. In the exhibition, new suspended, rolled, and floor-based canvases playfully respond to the arched architecture of Ikon’s galleries, filling them with a kaleidoscope of material colour. Their flexible forms merge techniques of painting and sculpture, a fusion that Mit has developed over the past thirty-five years in series such as Wall Works (1986– ) and Scrolls (1987– ). Covered in layers of paint mixed with gypsum, linseed oil, and glitter, the tactile works have a potency that feels heightened after months of social distancing. Standing amidst these and other works by Mit, one easily succumbs to their enchanting effect, their vivid colours and energetic arrangements giving them what he and others describe as ‘healing’ properties.[1] 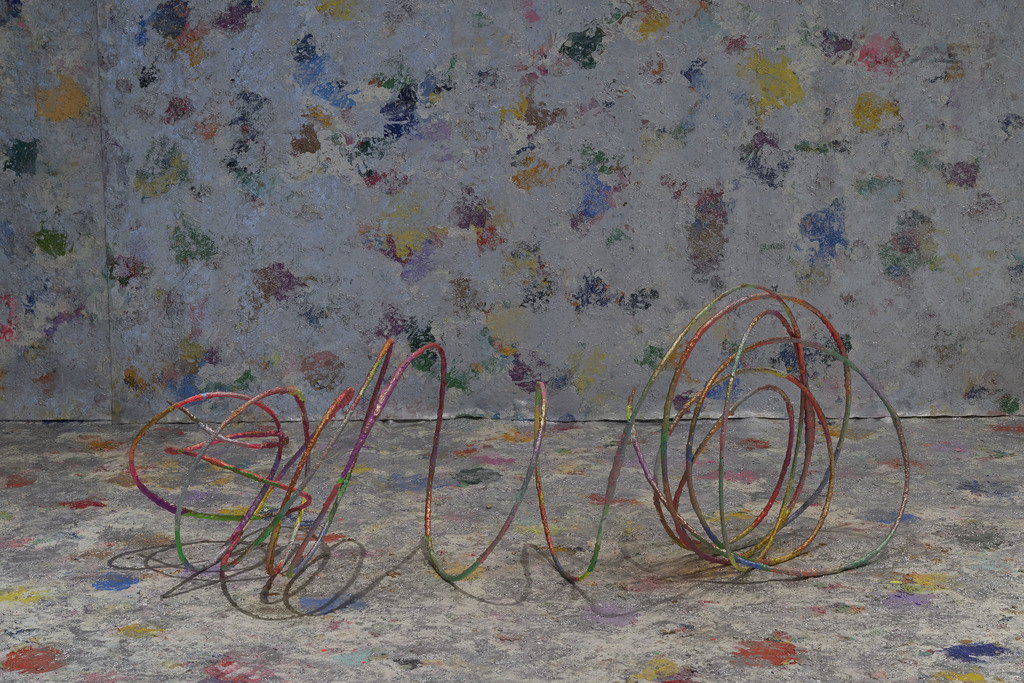 The diverse references of Mit’s art span Asian traditions of scroll and mural painting, the formal and phenomenological aspects of minimalism, colour field painting, abstraction, and postmodernism. Despite his works taking numerous forms, certain characteristics remain remarkably consistent: canvases are always painted on both sides, with motifs centring on geometric shapes, parallel lines, circular patches, and multiple specks of colour. Cuts to the canvas are a common feature and allow air to flow through it, giving his creations a sense of lightness and of movement. These cuts also make his works foldable: an invitation that is often left to viewers, who can decide how to shape them. Such is the premise of Dream Works (1999 –), a series of small, fronded canvases with internal slits that allow them to be curved and looped whether hanging or placed on the ground. In its inception, the series was intended to express the fear and excitement felt by people around the world on the eve of the new millennium. Metaphorically, the various Dream Works embody this emotional duality: the canvases can be rolled to “hibernate” or alternately, opened and expanded. Through the lens of the present, the proposition of the series resonates with the momentous changes spurred by the pandemic that invoke both trepidation and aspirations for a global renewal. It is for this reason that the title of the exhibition refers to this series, as well as Mit’s idea of art as ‘a utopian dream within everyday life’[2]: a concept that has served as a personal bedrock throughout years of political instability in Thailand. 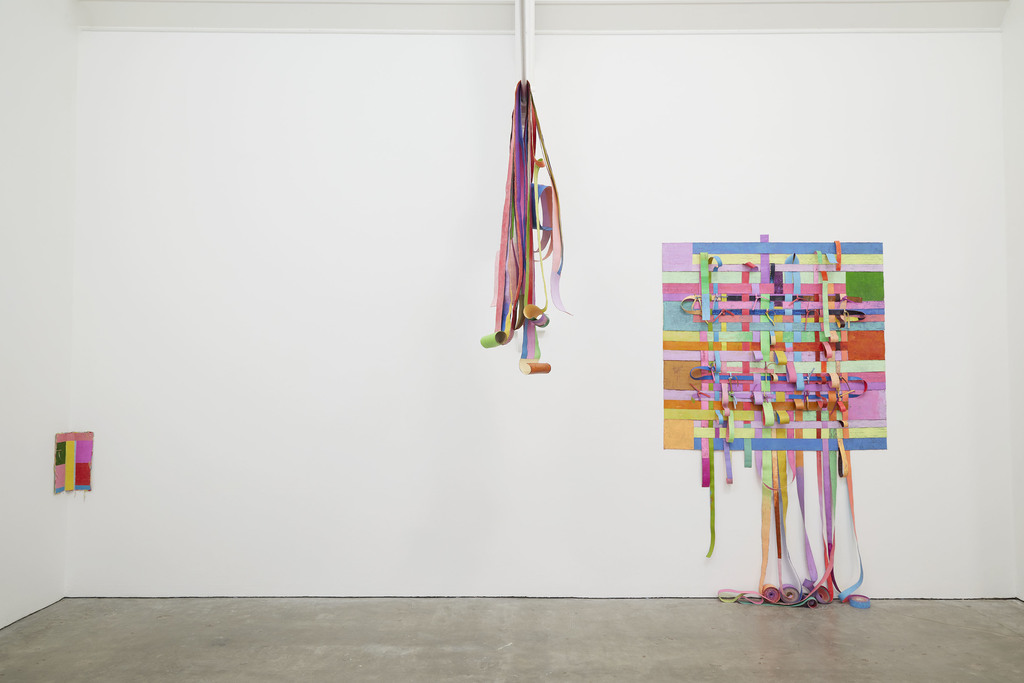 For some, the notion of his art as a social vehicle contrasts with its carefully crafted nature. The neutral white walls of art galleries tend to objectify its vibrant materials, giving his works the impression of aesthetic ends instead of playful means. Protocols of these spaces also make it difficult for viewers to engage with them in the physical ways Mit that would like—touching and walking over their surfaces, for instance—which would reinforce their identity as ‘social objects’.[3] Perhaps this is why his work resonates in everyday and outdoor contexts, where natural elements and social networks freely shape their forms. That he imagines the colours and structure of his work according to the energy he perceives in a given place only increases their site-specificity. Mit never sees his works as permanent objects, hoping instead that they will ‘live’ and change over time—even if that means their destruction.4 Many of his works test these potentials, whether the morphing mounds of paint and seeping liquid of Pools (2016– ) or the ribbons of canvas in Screens (2019), which rustle in the presence of a breeze. 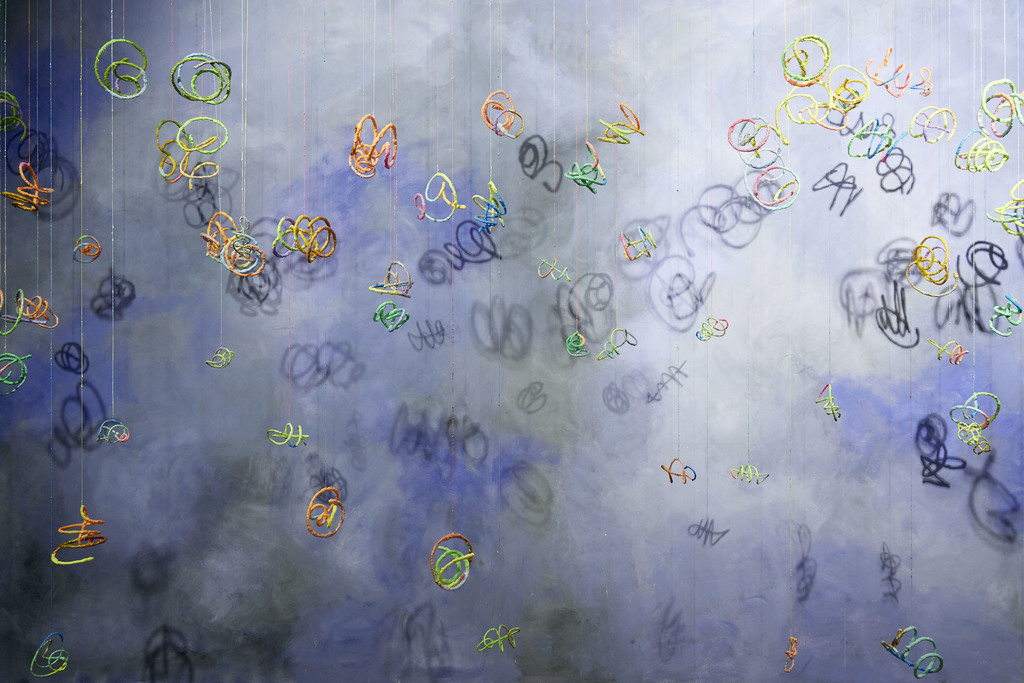 "Mit never sees his works as permanent objects, hoping instead that they will ‘live’ and change over time—even if that means their destruction"

By connecting his work with its environment, Mit aims to circulate positive energy between them, a practice which mirrors the Buddhist concept of energy as a constant flow between living things. At the heart of this idea is balancing positive and negative energy through means of meditation, natural medicine, and the distribution of karma.[5] The mental and physical labour of his works and their colours all form part of what he describes as ‘transfers of fields of energy’ from the earth into his works and their surroundings.[6] For Mit, the essence of art is meditation, where consciousness gives way to pure, reflexive making.

This text is extracted and adapted from a catalogue essay by Melanie Pocock, Ikon curator, for Mit Jai Inn: Dreamworld, published by Ikon and ArtAsiaPacific Foundation. It includes full-colour documentation of Mit Jai Inn’s exhibition at Ikon (15 September — 21 November 2021) and essays by art historian Simon Soon, critic and curator Brian Curtin, and an interview with the artist by Gridthiya Gaweewong, Artistic Director, The Jim Thompson Art Center, Bangkok. Copies are available for purchase here, priced £20.

1 Simon Soon, ‘Infective Paint’, Mit-ologies, Valentine Willie Fine Art Project Room, 2 May 2009, www.mitjai-inn.blogspot.com/2009/05/infective-paint.html.
2 As told to the author, ‘How I Became an Artist: Mit Jai Inn’, Art Basel, March 2021, www.artbasel.com/stories/how-i-became-an-artist-mit-jai-inn?lang=en.
3 Simon Soon, op. cit.
4 Mit Jai Inn, conversation with the author, 16 February 2020.
5 In the religions of Buddhism and Hinduism, karma describes ‘the force produced by a person's actions in one life that influences what happens to them in future lives’. ‘Karma’, Cambridge Dictionary, dictionary.cambridge.org/dictionary/english/karma. 6 Conversation with the author, 17 February 2020.