Above Unit London’s front desk hangs the titular work of Suchitra Mattai’s debut solo exhibition at the gallery, Monster. A mysterious silhouette appears as if to welcome us, emerging in lively paisley from a vintage toile de Juoy backdrop. The colonial textile gives us a steer. Look again at the position of the figure’s open arms and you see they’re in holding-a-shotgun position. Suddenly, that ‘welcome in’ turns to a ‘get off my property’. Mattai has replaced the gun with a home-made broom, traditional to Guyana, placing a piece of her Indo-Caribbean heritage into the frame. 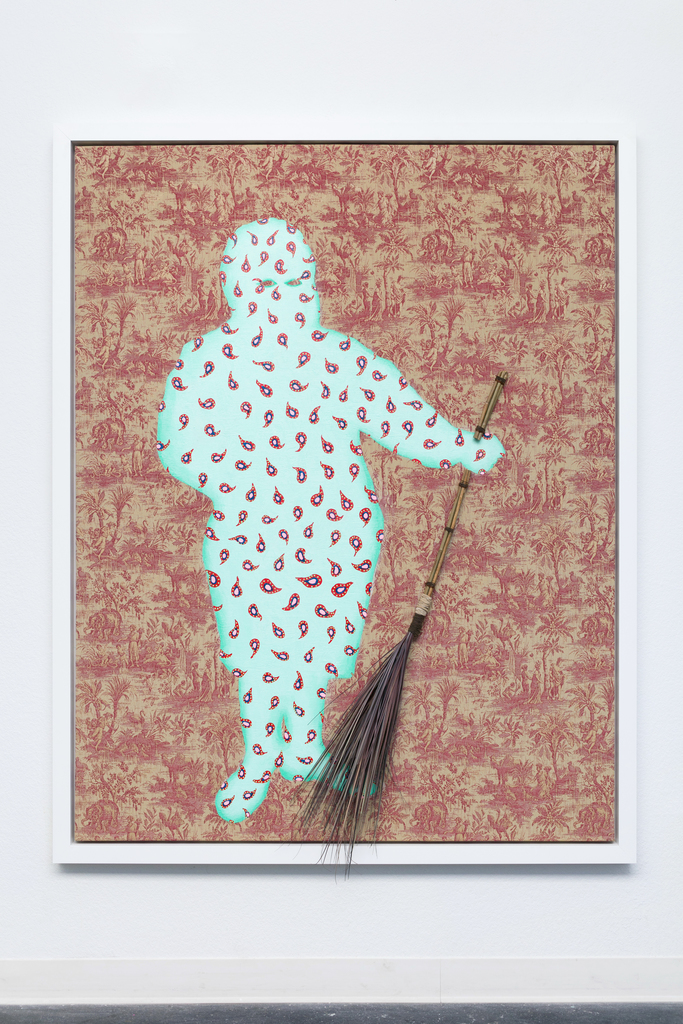 ‘I’m rewriting history’, Mattai says of the way her practice excavates the past to see ‘how it affects present conversations about race and gender.’ Indentured workers most likely produced the textile in monster (colonial India was the largest producer of toile de Juoy in the 17th and 18th centuries, during the height of its popularity), while the broom is an emblem of gendered labour at home.

Clashing with these two textures is the paisley silhouette – the monster – all of which evokes a discordant experience akin to reading Charlotte Perkins Gilman’s The Yellow Wallpaper. Set in a colonial mansion, Perkins Gilman’s Gothic short story pits mental illness against psychological horror, as the narrator begins to see, behind the wallpaper of the nursery where she is locked away on a ‘rest cure’, a malevolent figure who ‘seemed to shake the pattern, just as if she wanted to get out.’

Correspondingly, the body of work collected in Monster explores ‘the parallels of mental illness and immigrants’, Mattai says. In the patterns and found objects she assembles (‘my practice is very intuitive’) she shakes up the synapses, offers us a way into and then out of our own biases. ‘Most of our ideas about monsters come from folktales, myths,’ Mattai says. Her ambition for these works is that they ‘allow us to realise that we’re really constructing these conceptions of the Other, and then ask us to get rid of this distortion.’ 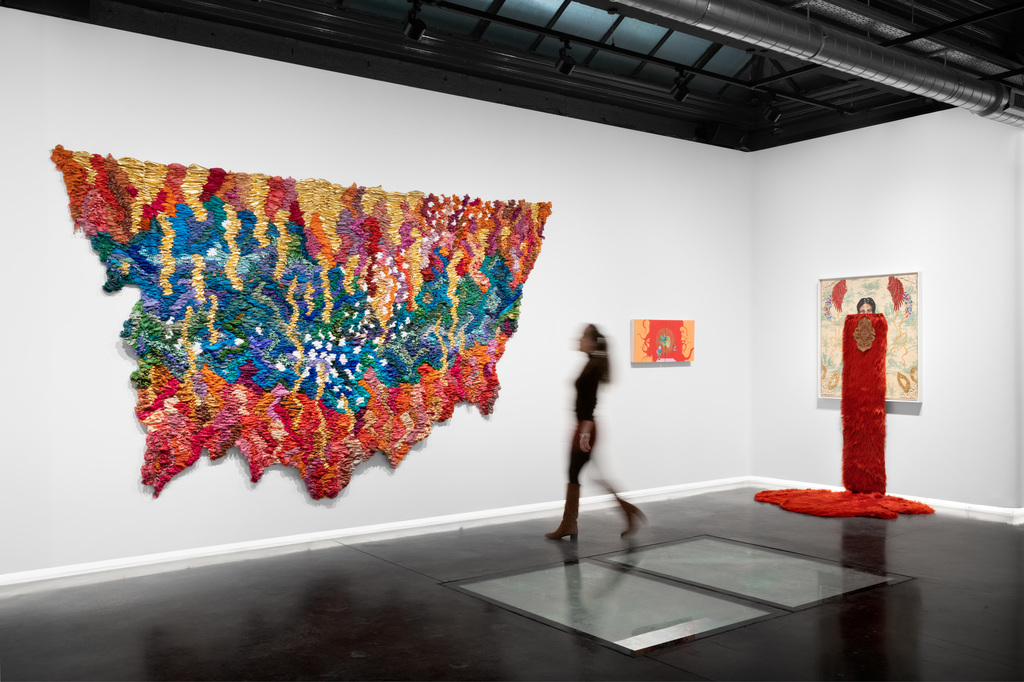 Rather than focusing on a clutch of particular stories, Mattai is interested in the way that myths tend to slide into one another – and what’s more slippery than a snake? ‘Obviously snakes move from culture to culture,’ Mattai says, mentioning Greek mythology's Medusa, the Garden of Eden in Christianity, ‘but in the Indian context, it’s Naga.’ The power and venom of the serpent race make them frightening, and yet they can be beneficial, such as in the story of the nāgarāga who abides on Shiva’s neck churning the Ocean of Milk. Mattai is drawn to this idea of ‘the snake being dangerous, but also having this power to help. It's about choice.’ 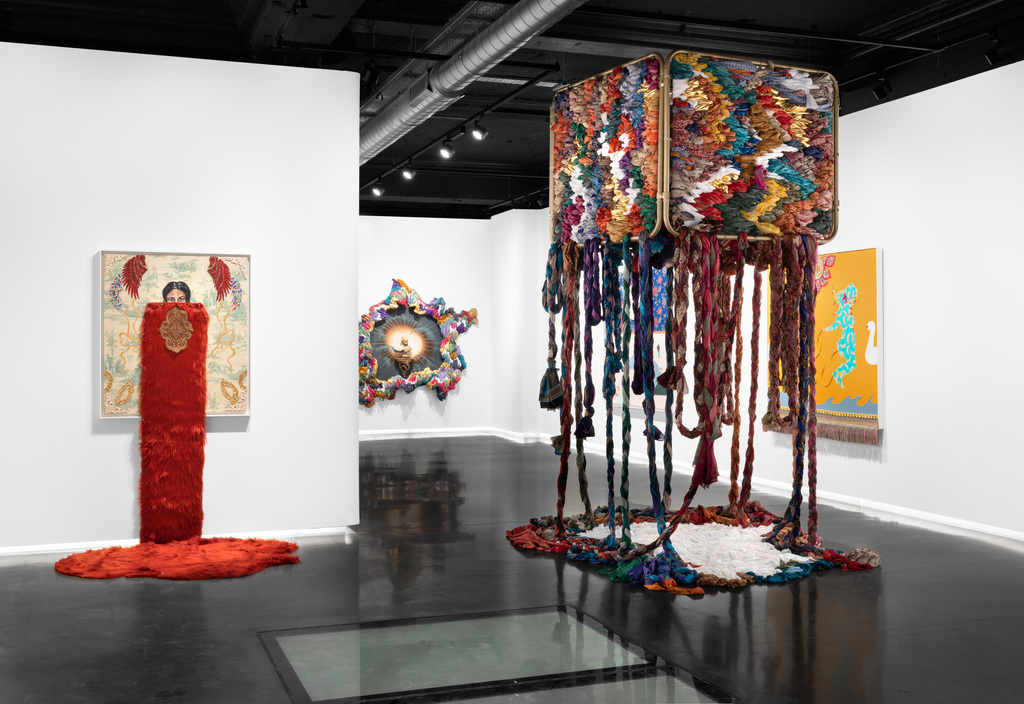 Right, and it’s this blurring of hospitality and hostility, I suggest, which makes guardian the most monstrous work in the exhibition. Mattai seems surprised. ‘guardian is the scariest for you?’ On the one hand, with its innocent title, the welcoming colours of dozens of vintage saris carefully braided together in a rippling abstract pattern, and its golden gates, guardian is one of the most inviting works. On the other, the saris hang down tentacular, and the gates looms overhead, as if at any moment they could drop and trap you. 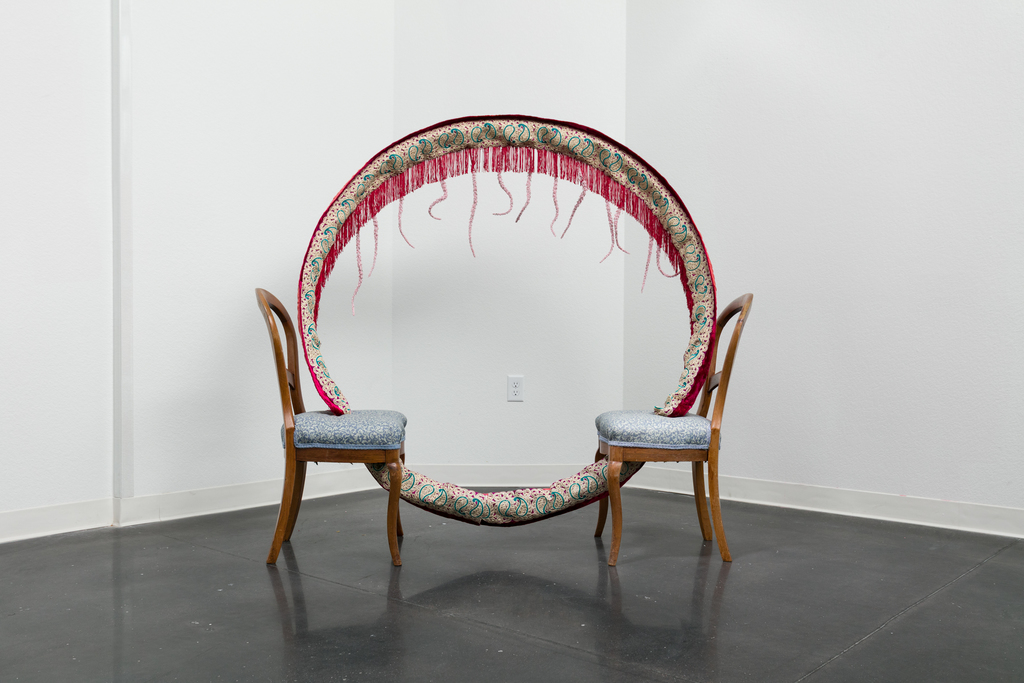 ‘Here, too’, Mattai says, meaning Denver where she now lives. ‘Mexican immigrants are kept in cages. This idea that the gates protect you, but then also contain you.’ There’s a parallel here to the way our prejudices can develop initially as defence mechanisms – ‘like a metaphor for the gates of our mind’ Mattai says. You could look at guardian ‘as a device in the exhibition that offers some solace. But then it also, of course, conjures all those gates and barriers between us.’ 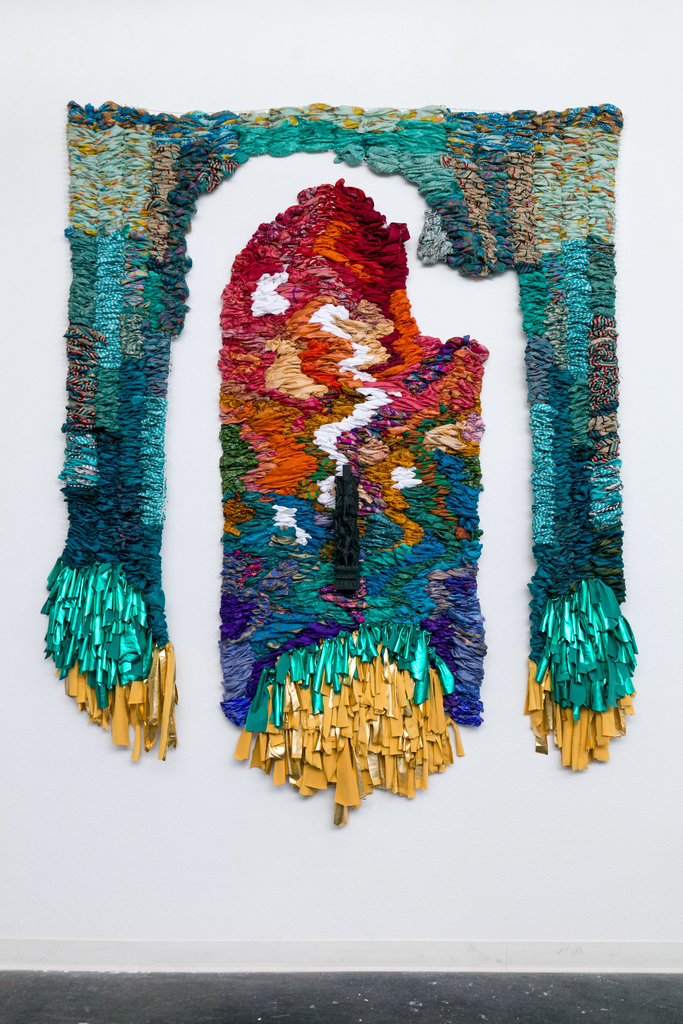 "it's giving voice to women, and to these practices, but also a nod of acceptance that those practices are valuable"

From divisions back to the things that bind us – and tightly braided sari-tapestries recur throughout the exhibition. ‘It took me a while to figure out how I wanted those materials to play out in my practice,’ Mattai says. ‘Each craft-based process has a different meaning for me, a different lexicon. As a girl, my mom would always braid my hair, a lot of Indian women have braids, and then of course when you’re using saris it’s another cultural reference. It’s important to me now to use them, because I feel as though those practices were of the domestic, they weren’t shared. Using those materials and practices comes from a feminist position: it's giving voice to women, and to these practices, but also a nod of acceptance that those practices are valuable.’ 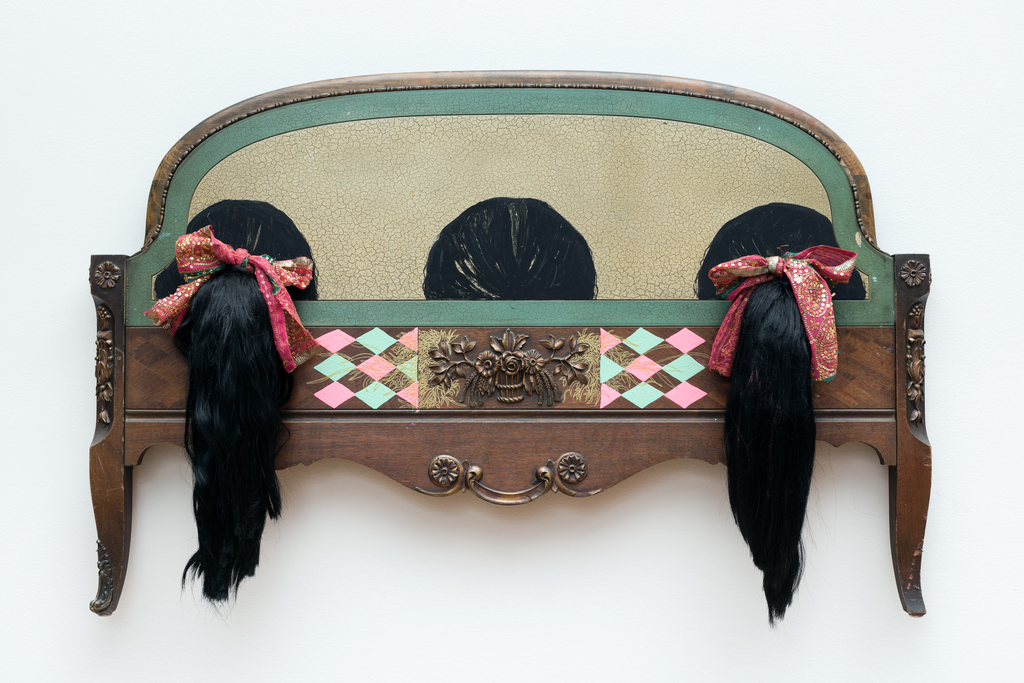 Suchitra Mattai, forward thinking in an age of sadness (2018). Courtesy the artist and Unit London.

"the monstrous body a metaphor for the cultural body"

One sculpture sees two women lose their voices to the domestic; that is, we see matching ponytails tied in pretty bows, as if their faces are sunk into the ornate wood looking away from the viewer. This work is of the creepy twin variety – yet it’s titled ‘forward thinking in an age of sadness’ (2018). How can we be forward thinking? ‘For me,’ Mattai says, ‘it's about finding those moments of positivity in connections to others, and celebrating those, and hoping that those are what allows us to transcend all the calamities around us.’ 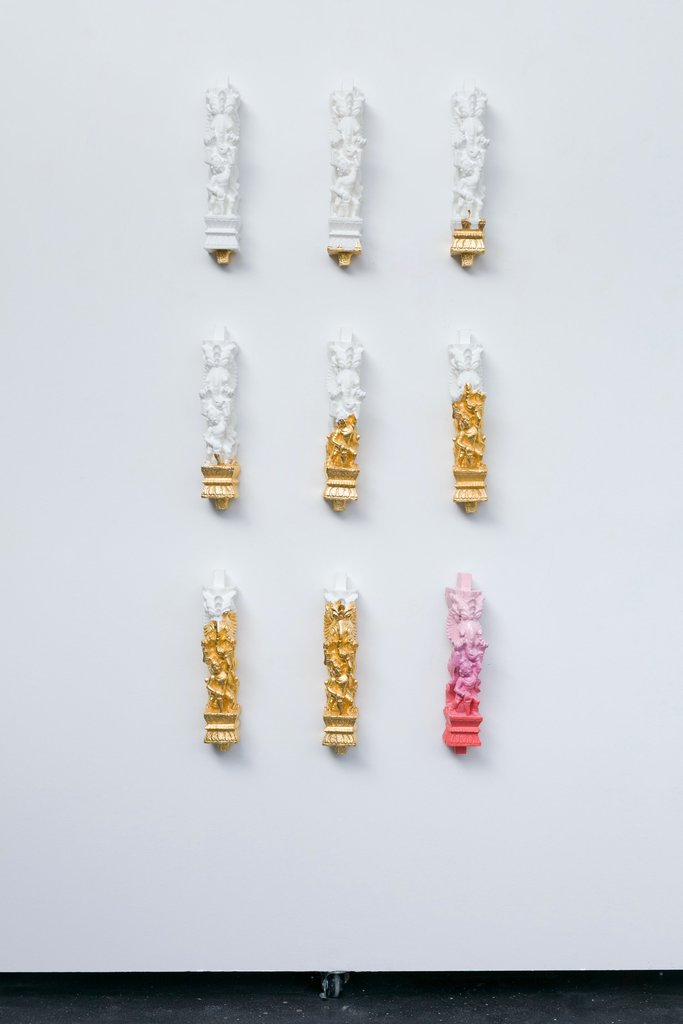 By titling her exhibition Monster, Mattai dangles the question of what the work might say about the culture it was made in. The fil rouge of monster theory, after all, is that the terrifying creatures we create are a symptom of a particular time and place, the monstrous body a metaphor for the cultural body – see: ‘chupacabra hysteria’ being associated with deep economic crisis during the mid-1990s, or Trump likening immigrants to zombies.

For me, despite its dogged focus on inequity, Monster presents an incorrigibly optimistic view of our time and place: from gateways to cages, from unknowns to knowns, these works are always shifting. Sharing this propensity for change ourselves, we gravitate towards them. In the end, despite even our monstrous differences, what binds everyone together is a frighteningly silly (or ridiculously frightening) fact – that all we can ever know for sure is how much remains unknown.