In a way, all artists are clowns. Not in the sense of being comic performers — ‘characterised,’ as International Clown Hall of Fame puts it, ‘by coloured wigs, makeup, outlandish costumes and usually oversized shoes’ — but in the more ancient sense of defying convention, mocking authority, and causing disruption. Of being tricksters; subversive truth tellers. The artist and the clown inhabit two worlds at once: the ‘real world’ of the everyday, and the land of the imagination, which is populated by symbols, archetypes and fantasy. Taken to their illogical conclusions, artistry and clownery resemble magic — rattling reality through a series of tricks. 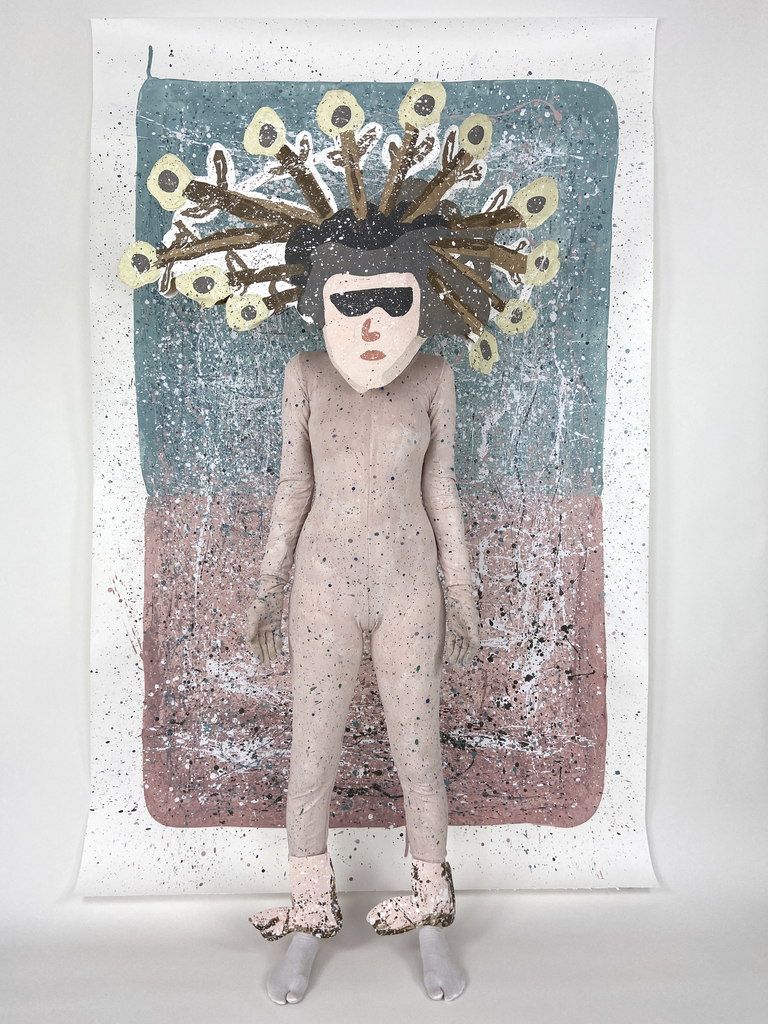 Performance still. Be in Bloom

"Half horse, half woman, all female stallion"

Kate Groobey’s art is the work of clownery par excellence. In her new solo exhibition Female Stallion, everyday moments become extraordinary flights of fantasy. Each of the six vast and textured paintings in Groobey’s series spin around conversations and comments between the artist and her wife, the writer and poet Jina Khayyer. In each, Khayyer becomes an archetype or clown of sorts – features smoothed into cartoonish blankness, represented by rouged lips, dark eyes that sometimes become sunglasses, and a jaunty brown hat. This Khayyer cipher sits on the back of a blue horse. Later, she perches in the horse’s mouth. She stands encircled by a rainbow. Flowers bloom from her head. With an outsized, aardvark-like tongue, she licks ice cream. And, all the while, a video loops on one of the gallery walls, featuring Groobey dressed as her character in painted costumes and giant heads. Half horse, half woman, all female stallion, Groobey literally horses around: performing in staccato movements as Khayyer’s voice loops through the soundtrack; inviting the viewer into her rainbow, instructing us to bloom. So, there are tricks and symbols, and it just so happens, there are also outlandish costumes, wigs, big boots, and a hefty dose of subversive, spirited humour. 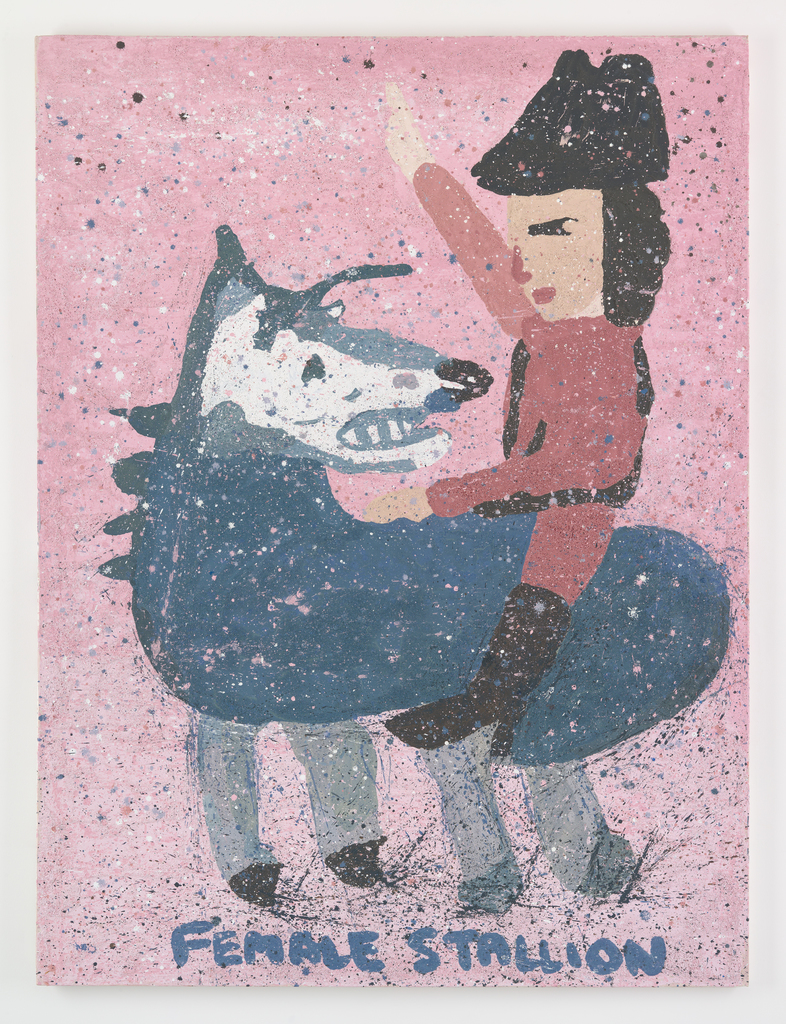 ‘At the base of it,’ Groobey says, ‘is the idea of painting coming alive.’ Certainly, in her video performances it seems as if her oily protagonist has stepped straight off the canvas. And, as a trickster tease, at one end of the gallery space a mannequin in a horse-suit and head stands with a tiny Khayyer cipher in its mouth. Having just seen Groobey in this guise on screen, swishing and flicking the long horse tail in a repetitive burlesque, it really feels like the doll could spring into action at any second. Recently, Groobey realised that her interest in fantastical, animated paintings ‘perhaps established itself in childhood, from Roald Dahl’s The Witches, where there was a painting with a little girl trapped in it, who was moving around.’ Later, just before studying at the RCA, Groobey read the Harry Potter books, ‘and again, there were these paintings that move. I think that idea really sunk into my mind.’ 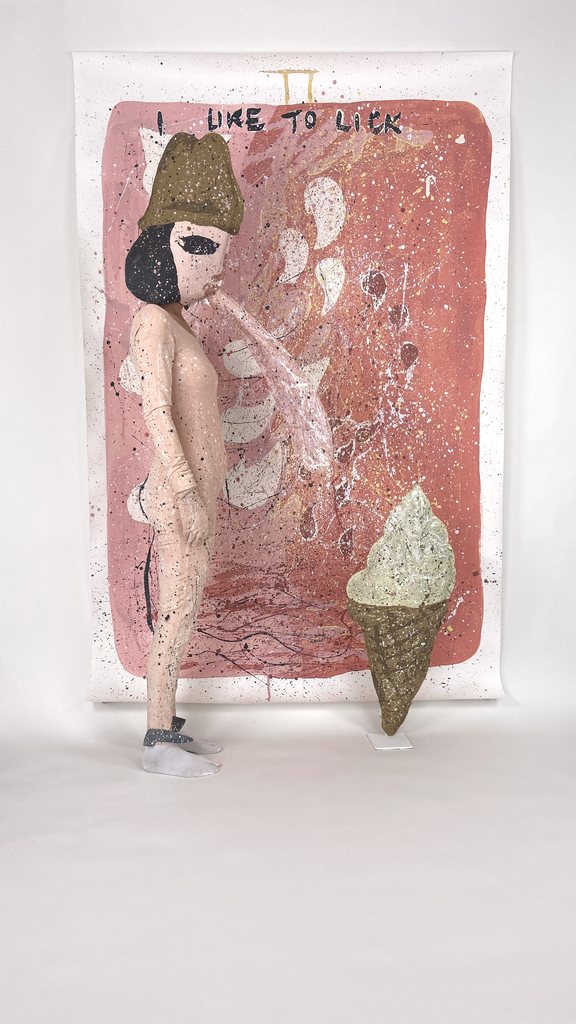 "swishing and flicking the long horse tail in a repetitive burlesque"

Of the many pleasurable aspects of Groobey’s work, a crucial one is her ability to absorb her surroundings and experiences, trotting them out anew in her paintings and performances. Nothing, it seems, is off limits. In 2018, Groobey won the Daiwa Foundation Art Prize – the first woman to do so in the history of the award. ‘Part of that prize,’ Groobey explains, ‘is to travel to Japan to do an exhibition there.’ In Japan, the Foundation ‘helped facilitate you with whatever you want to do,’ Groobey says, and ‘one of the things I wanted to do, along with Sumo’ was experience Japanese Nō theatre firsthand. Often based on tales from traditional literature with supernatural beings transformed into human form, Nō incorporates masks, costumes and props in a dance-based performance, where emotions are primarily conveyed by stylized gestures. ‘I was so struck by it in such a surprising way,’ Groobey says of her encounter with the classical Japanese dance-drama: ‘It almost sent you into a trance.’ Reading about it afterwards, Groobey says she learned ‘the idea behind it was really to remove the barriers between the performer, the character, and the audience. So you become one with this character.’ She was fascinated by this notion, and the trance-like state it induced in her. ‘It almost shifts your subject position,’ Groobey says, ‘to be completely engulfed in the universe, and the inner universe of this character.’ 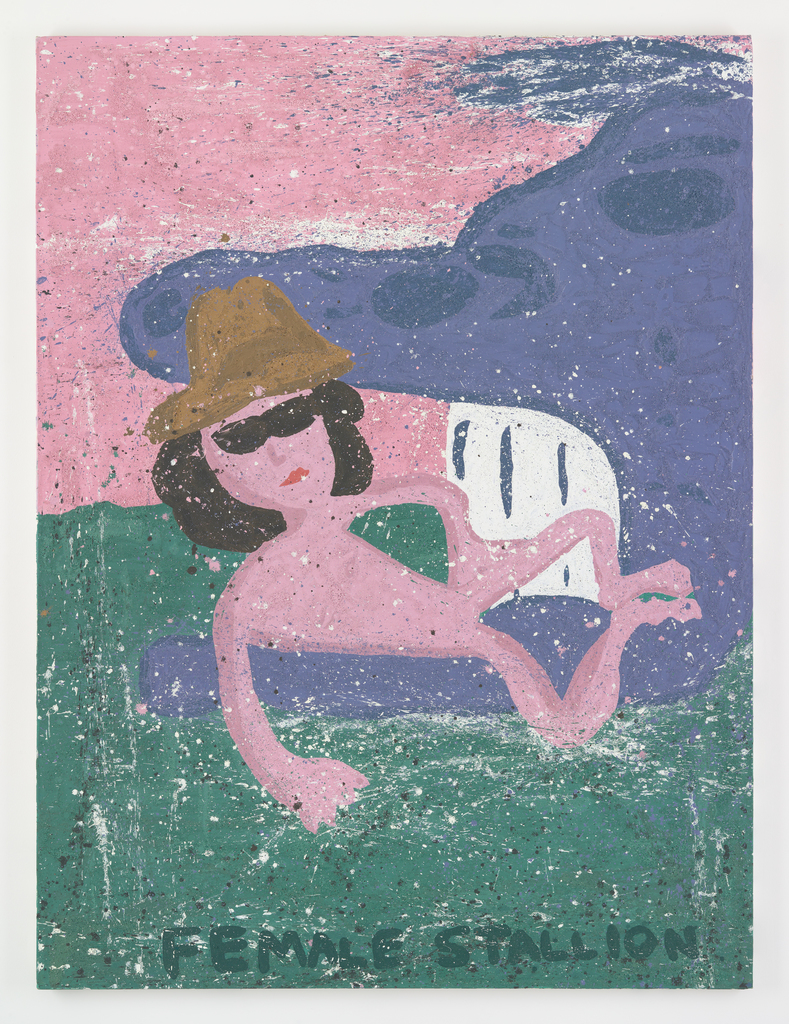 Watching Groobey’s masked, stylized moves on screen, and sensing the slippage — in both the performances and the paintings – between her and Khayyer’s universe, that of the audience, and the imaginary realm in which they all become one, it is clear the influence Nō had on Female Stallion. Yet, the video series in particular was also inspired by more contemporary performance styles. ‘I got a new iPhone,’ Groobey says frankly. ‘When I got this new one,’ she continues, ‘I started playing around on it and Boomeranging my footage of myself.’ As with Nō, Groobey found herself ‘captivated by how that kind of drew me in, almost hypnotically. Just one movement repeated.’ She decided to try and incorporate the technique into her video work, describing the end result as ‘almost like a series of Boomerangs inserted into or built into the footage of me performing.’ Or, like a Nō performer with an Instagram; a millennial mime artist. Much more than a visual trick, the essential element is empathy. ‘I just think,’ Groobey says, ‘in the current times we're in, the idea of being able to shift your subject position and be open to other people is so important.’

Female Stallion looks like a zany, campy fairytale, but, as in a Roald Dahl story, there is a darkness underneath the bright surface. Groobey hints at this when describing how the painting Get into my Rainbow came to be. Having been enveloped by a mystical rainbow when visiting Yosemite National Park with Khayyer in 2017 – one made circular by sunlight shining through an all-encompassing mist-spray – Groobey relates how the image came back to her suddenly years later, while performing in Poland. ‘The rainbow really came into my mind in that moment because, understanding the political situation where the government is anti-LGBT in laws and against that community, it felt very uncomfortable going there to perform,’ Groobey says, ‘and that rainbow, that protective rainbow came into my mind.’ Now, in both the oil painting and its corresponding performance, the rainbow rings the central character like a flotation device — a life-saving swimming accessory that symbolises queer pleasure and safety. 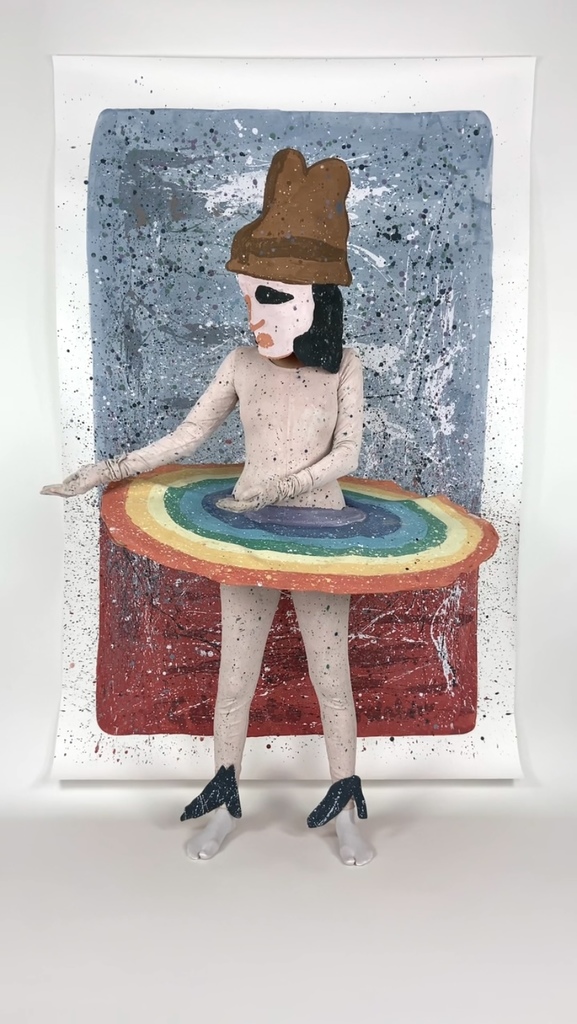 When asked if her work is political, Groobey is emphatic: ‘it is. Yes. Definitely.’ Like empathy, pleasure is also essential to this. Indeed, Groobey suggests that Female Stallion should be understood as a companion piece, of sorts, to her earlier series Pure Pleasure, which was displayed at Ikon in 2018. After the show, ‘I had so many messages from completely random women on Instagram, just saying how wonderful it made them feel, how it made them feel so good,’ Groobey says, with clear happiness in her voice. ‘It was very special,’ she affirms of the experience, ‘and it really touched me.’ Groobey wanted to carry this forward. ‘When I was thinking what I wanted for this show,’ she says, ‘I really wanted to offer a space, a female space and queer space, for people to enter into.’ The whole show then, is perhaps encapsulated by the rainbow ring, and Groobey and Khayyer’s joint invitation to ‘get into’ it – to be joyfully engulfed. 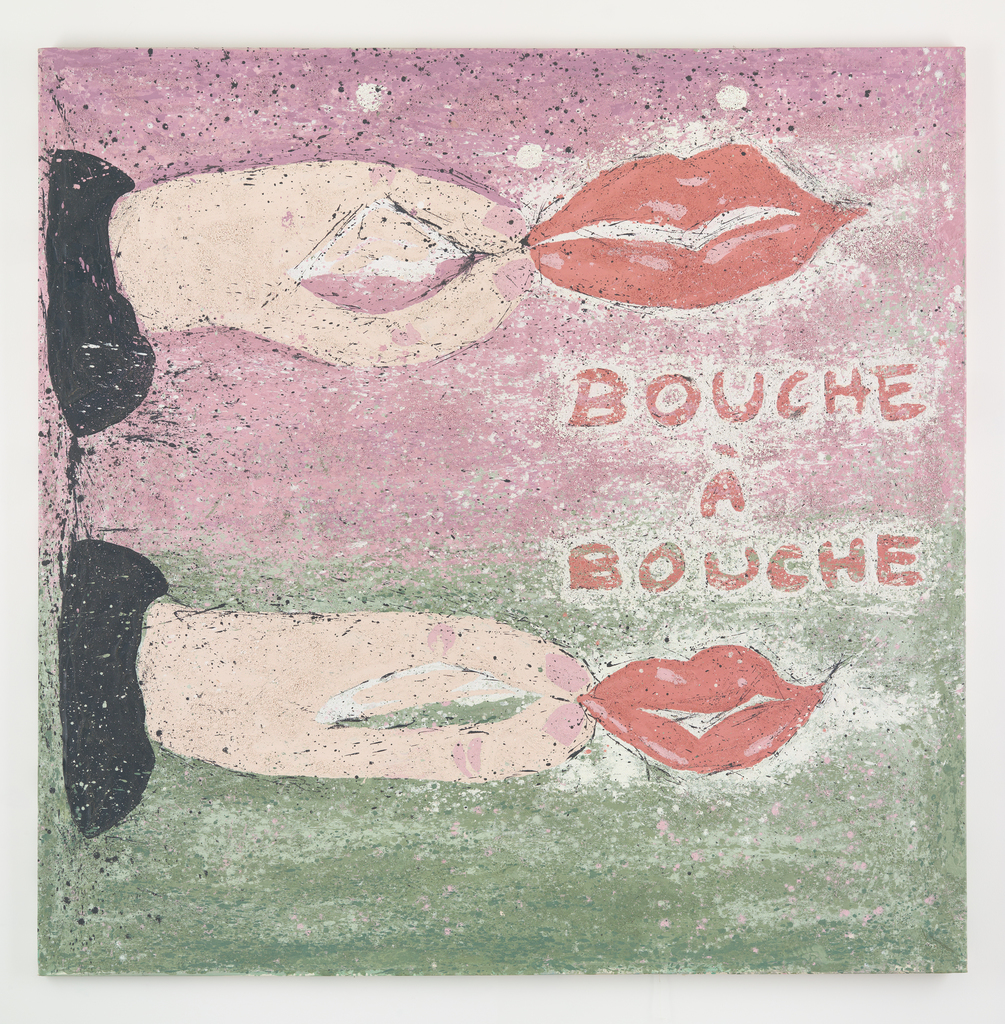 "Boomeranging footage of myself"

‘Really,’ Groobey says reflectively, ‘this has been a bit of a breakthrough show for me.’ She made the series over the pandemic period, during which she and Khayyer moved to the rural south of France. At the same time, of course, ‘normal’ life was put on hold. As Groobey puts it, ‘all the shows were cancelled, all my shows were cancelled.’ Yet, in this stripped back state, she found ‘clarity of thought.’ ‘It's easier to think in the countryside,’ Groobey explains, ‘there isn't so much distraction. Not so much noise.’ In this period of relative quiet, Groobey discovered that ‘things came together that had been unresolved for years.’ Admitting to having been ‘quite blocked in the beginning,’ she ‘was able to step back a bit more.’ Part of this was purely practical – ‘in the countryside I had more space, so I was literally able to step back’ — but there was an emotional and intellectual aspect too. ‘I really did take everything apart and think again,’ Groobey says. The ability to step back, paradoxically meant she was ‘able to take the next step.’ She likens this experience to ‘a record player,’ highlighting how ‘it catches, and then it really starts again,’ but this burst of energy also sounds a bit like a painting coming alive. Indeed, Groobey’s whole creative process seems like a magic trick – sparking into being from Khayyer’s comments and innuendos and transforming into line drawings, then watercolours, then big oils. ‘Finally it gets almost like a snowball,’ Groobey says, ‘gaining traction and momentum, and then it kind of explodes off the canvas.’ Ready to dance, disrupt, and beckon towards pleasure.