In This Time and Space at London’s Ronchini Gallery sees New York-based Jacob Hashimoto layer hundreds of small bamboo and paper kite elements into geometric patterns. Recalling microscopic cells as readily as motherboard circuits, the collages toggle between painting and sculpture, density and lightness, with the easy changeability of clouds. 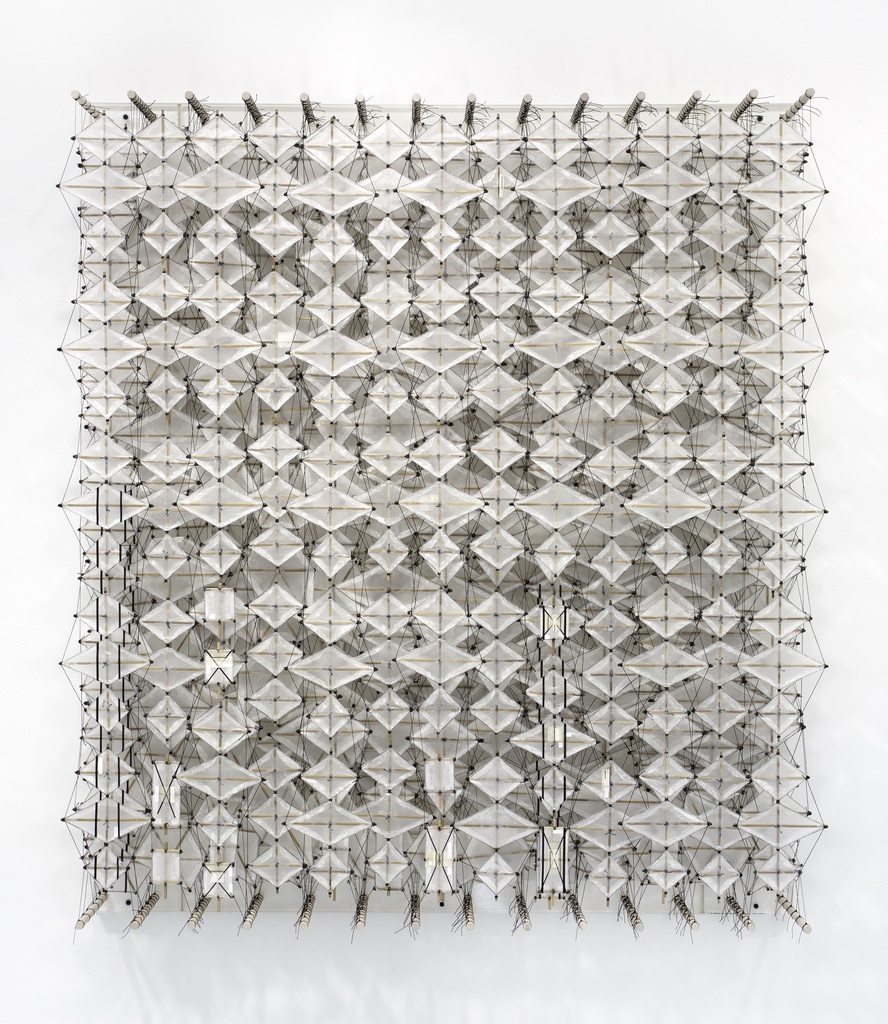 Could you talk a bit about the role of ‘kites’ in your work?

Most of the work over the last 20 years has been built out of hundreds and sometimes thousands of kite-like components - I say ‘kite-like’, because they are much more robust and sturdier than a flyable kite would be, but are built on the same geometries. Basically, these components are strung together in chains to make painting-like compositions or are strung individually to create undulating canopies of suspended elements, whole skies of suspended kites. The kite is the lowest common denominator of the work. 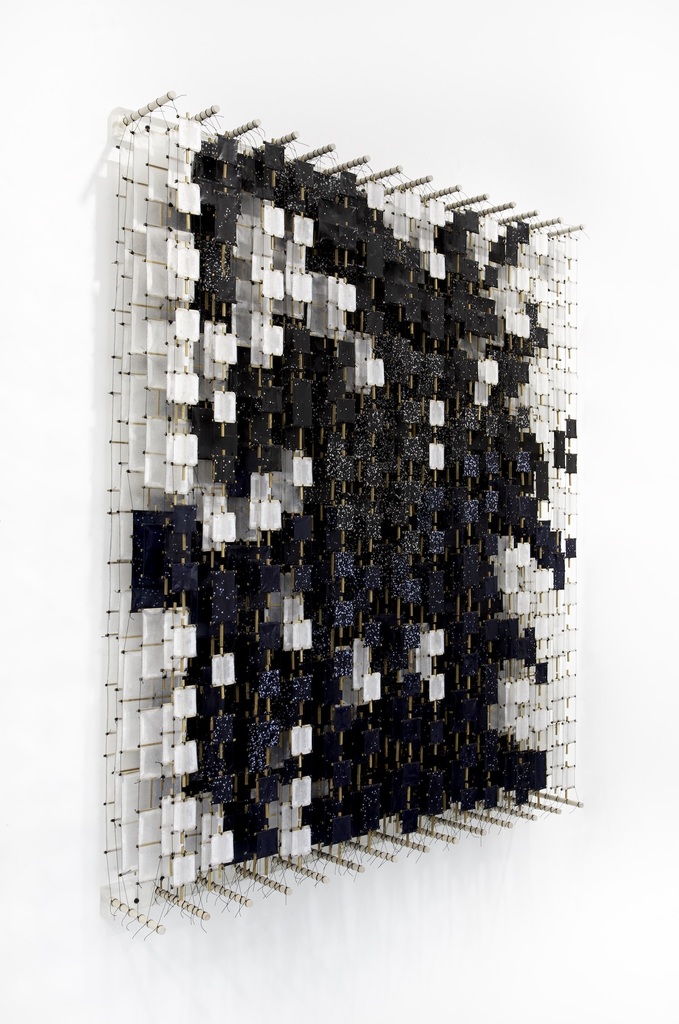 I first started using the kites when I was an undergraduate at the School of the Art Institute of Chicago. I was building them to fly in Grant Park and as I collected more and more of them, it was kind of organic to start using them in my work. I had been working in painting and printmaking for a number of years and was looking for a way to move the work off of the wall and into a more sculptural space. Having a pile of kites around just proved a useful resource at the time and using them opened the language of my work to huge possibilities. 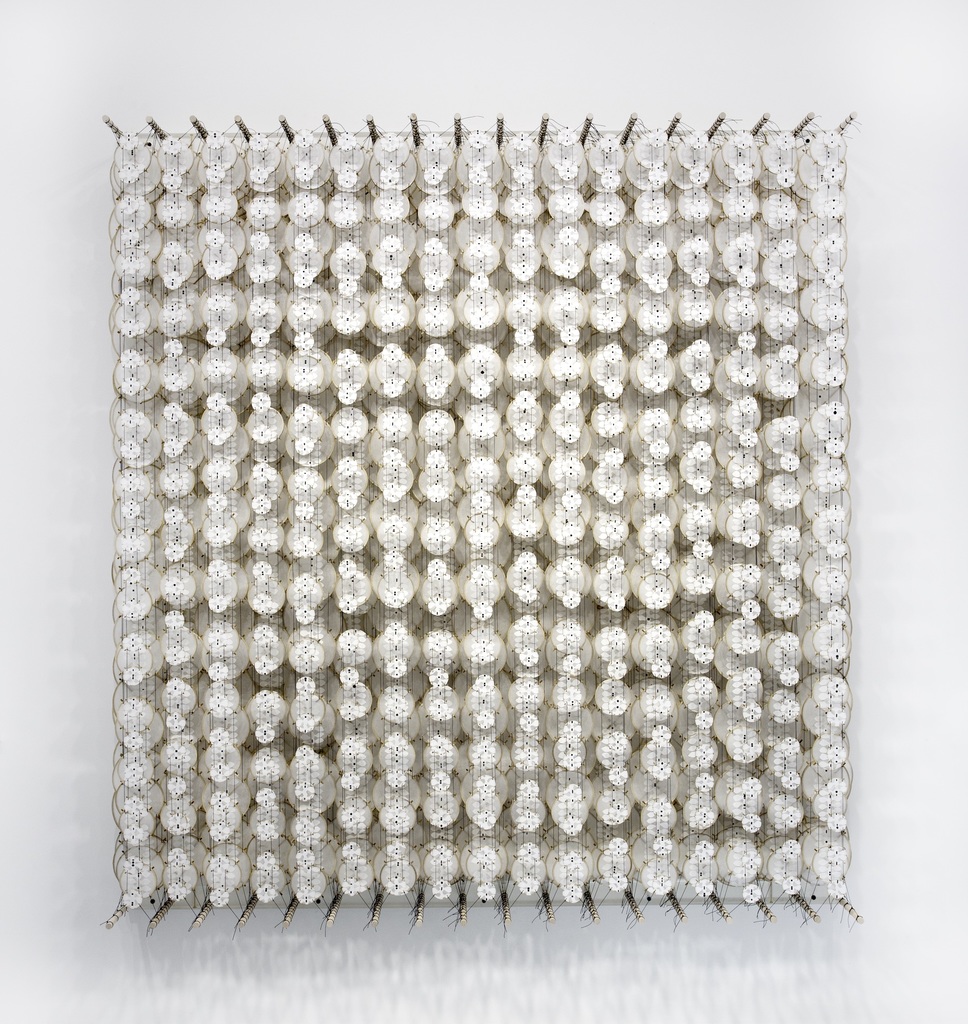 Jacob Hashimoto. In this time and place, 2021. Courtesy the artist and Ronchini Gallery

These kites have been an important part of your work for the past twenty years, and typically each work can contain hundreds (if not thousands?) of them arranged in geometric palimpsests - is there something about the repetition itself that you find interesting? Could you make them in your sleep?! 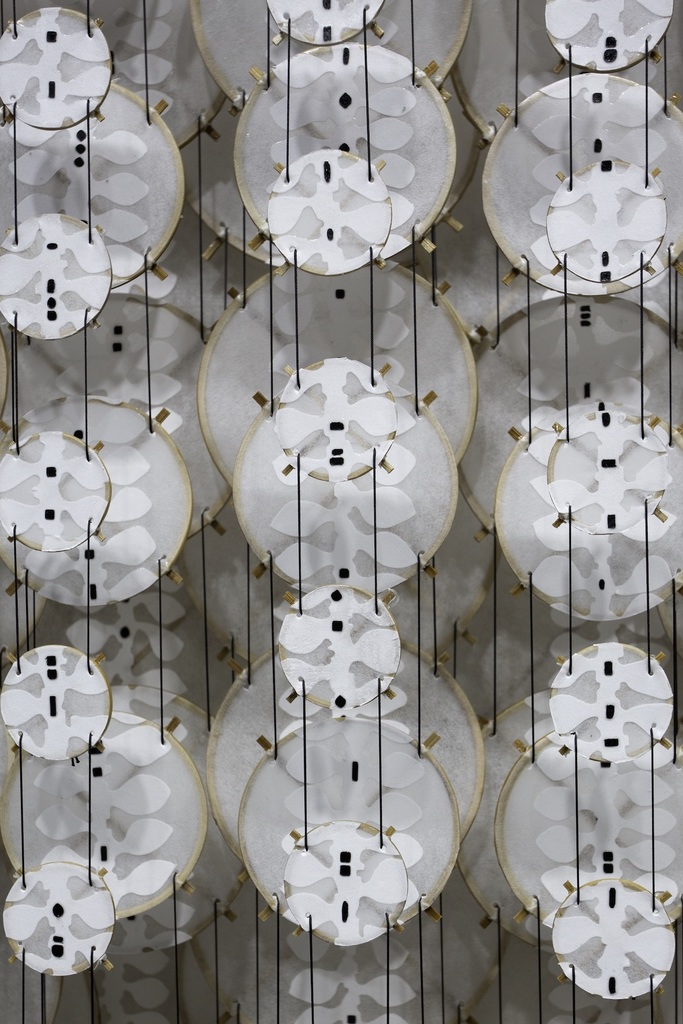 Jacob Hashimoto. In this time and place, 2021 (detail). Courtesy the artist and Ronchini Gallery

There are a lot of kites. I probably can’t make them in my sleep, but over the years my staff and I have become quite good at building the kite modules for the artworks. The repetition in the work is interesting to a certain extent, but I’m thinking of each kite as a method of mark making more than anything else – so just as a painter is sometimes in harmony and sometimes in conflict with the process of marking the canvas with paint, I struggle some days with the process of deploying these objects and, at other moments, the process is very fluid and meditative. 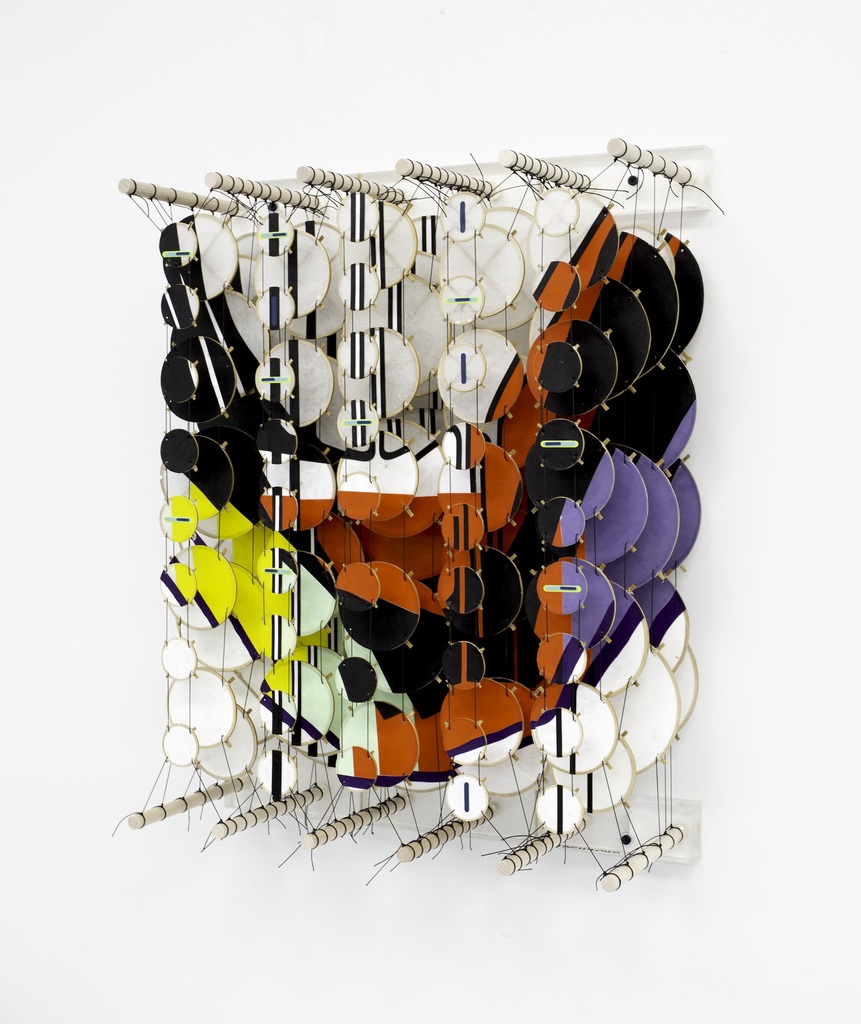 Could you talk about the relationship between the two- and three-dimensional in your works? 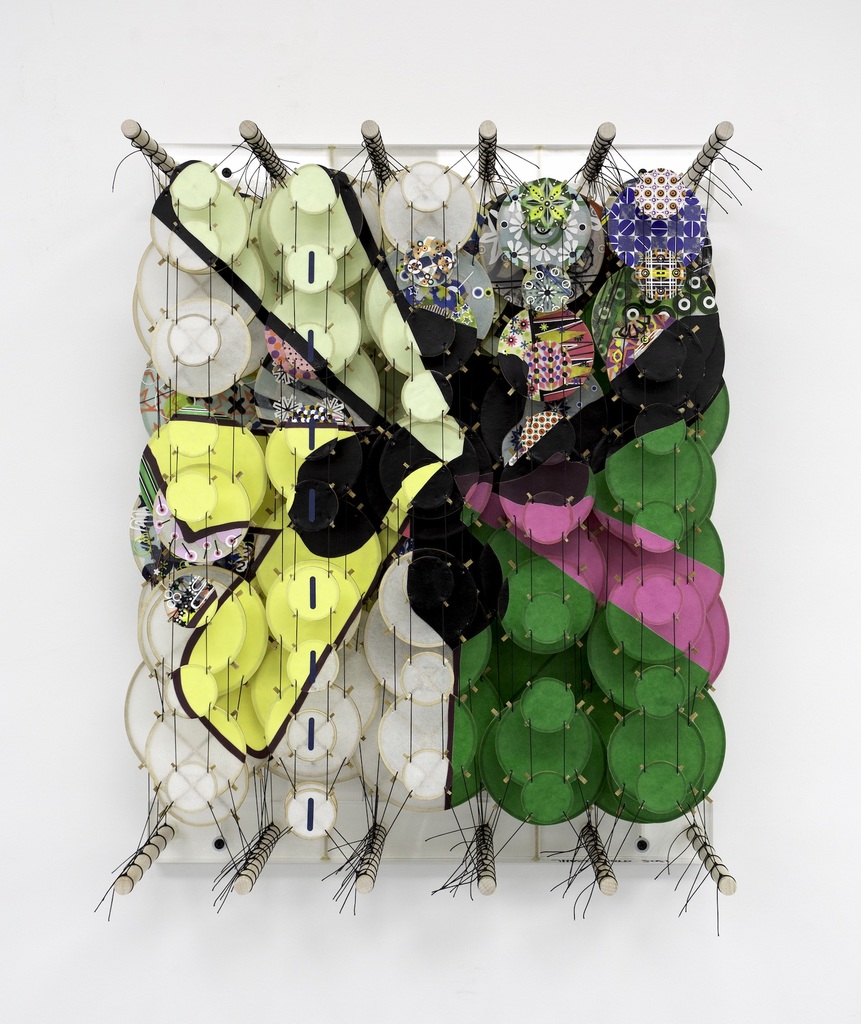 As I mentioned earlier, my background is in painting and printmaking. The work that I make using the kites definitely has its foundation in that language, but (as I’m working with objects) it’s also sculpture. With the wall works, I think that you can clearly see the relationship between object and image – the graphic image of the overall composition is defined by thousands of layered kite-objects making a lofted tapestry of sorts where one can see through the layers of the kites into the depths of the work. These compositions often use landscape devices to create a sense of space and narrative. 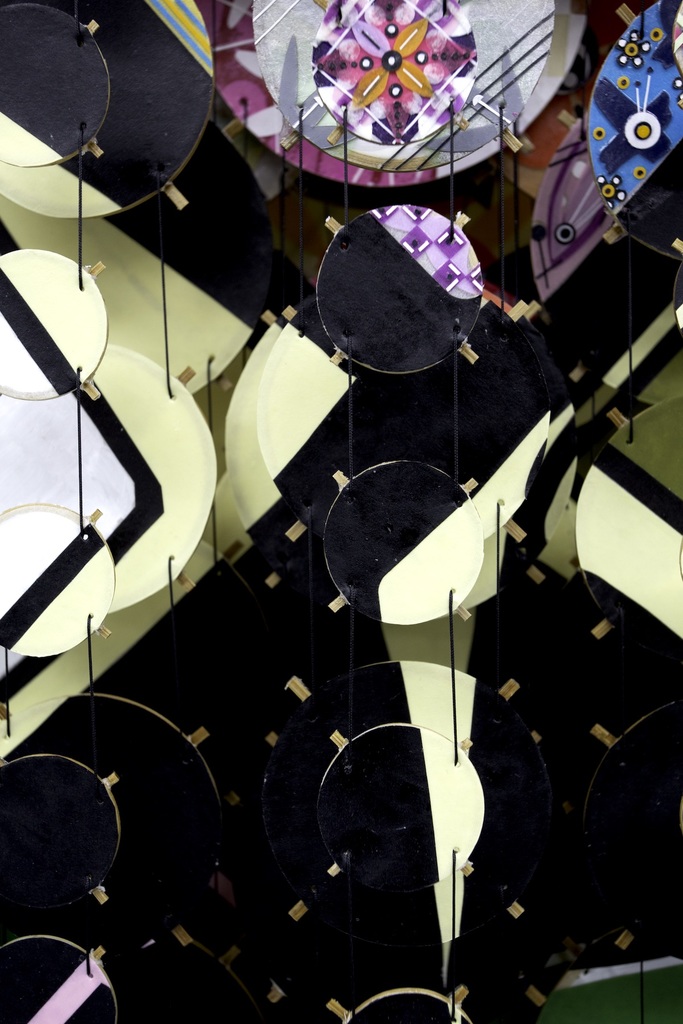 Also, I think the landscape spaces are interesting illusionistic foils to the sculptural reality of all of these actual objects - the room-scale works by contrast are less about traditional painting or illustration or video game spaces and more concerned with creating architectural or stage-like spaces through which the visitor can travel. Often these pieces rise from the floor to the ceiling of a space, towering over the viewer like rolling clouds or endless chandeliers.

Could you talk about the inspirations - micro, macro, Mine-cro(!) - behind the exhibition In This Time and Space? The title might suggest you were thinking about the pandemic?

Micro, Macro, Mine-Cro? That’d be a nice title. Some of this is probably illustrated in one of the first pieces that I ever made out of kites. It was called “An Infinite Expanse of Sky” – I built this piece out of 10,000 small rectangular kites which had clouds printed on them. They hung in this giant canopy above the viewer that created an arching wave of sky, a sky built of kites. In this particular piece the micro, cloud-kites, were used to build the macro, sky, and the whole thing was built on the x,y,z coordinate system which clearly very mine-cro. Generally speaking, the work is interested in creating small, little individual compositions - mini collage paintings with their own language and intention that are aggregated into larger, more gestural graphic compositions. The ranges of both, conceptually speaking, are pretty diverse and have changed surprisingly substantially over the lifespan of the work. What remains is this chaotic unresolved fractal landscape.

In what time and space was the work of the same name made?