Elmgreen, Dragset and The Whitechapel Pool

There are 530 swimming pools in London, 196 of them public. If you live in the capital, you’re well provisioned to pop round the proverbial corner and take a good look at one – if you felt so inclined. Many of us have intense childhood memories of swimming lessons, in or outside school; the tang of chlorine, goggle welts around your eyes, swallowing water and being kicked in the head by fellow visitors. Sensorially speaking, an average public pool covers most bases, then: the smell and taste of chemicals, the curious feeling of moving through water, a cacophony of squeals and chatter bouncing off tiles and the visual impact of blue water full of bobbing bodies. Our associations with pools are strong, and definitive – so when is a pool not a pool? When it’s empty? How about when it’s in a gallery, and ideas about ‘looking’ take on new implications entirely?

At Whitechapel, there’s a pool masquerading as a pool – abandoned. 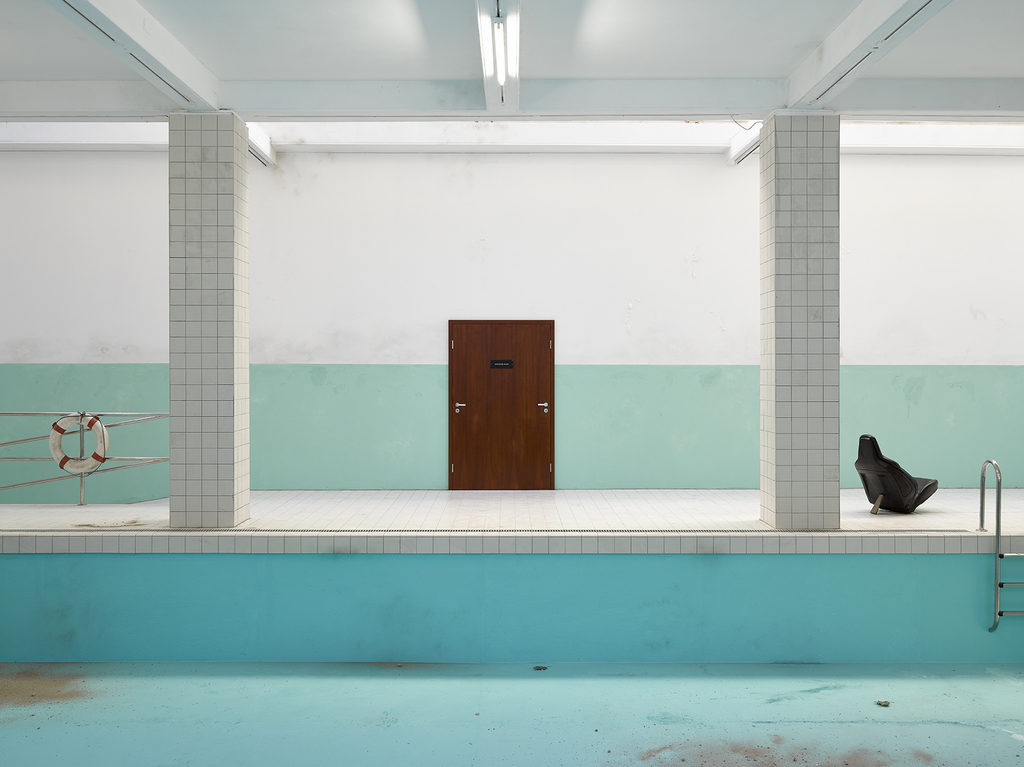 At Whitechapel, there’s a pool masquerading as a pool – abandoned. Cracked tiles, a small pile of leaves and a changing room door all tell a story we don’t know we’re reading about what this space is. On the wall is a text in the spirit of expository labels we’re used to seeing in rooms like this one (an expectation which has just been confounded by walking into a gallery and finding something more like a leisure centre) explaining a work of art and listing its materials and/or creation story. It’s also reminiscent of the plaques which pop up in shared spaces, detailing the history of a building and its sponsors; this one is headed ‘Public Notice’, and footed with corporate logos. Tower Hamlets, CL Architects and Desert Flower Art Hotel and Resort Corporation have all contributed to the pool’s story, we infer. Its ‘Short History’ is probably 400 words long, and takes us from an ostensible opening in 1901, through its heyday in the 70s and David Hockney’s supposed depiction of it in his most famous works, to its abandonment in 1987 before being sold under Boris Johnson’s tenure as Mayor in 2016. Now, it’s been acquired for development by GenTri Investment. Has it?

Artist duo Michael Elmgreen and Ingar Dragset are behind the ruse, as they are responsible for the exhibition continuing upstairs. Characteristically imbued with black humour and inquisitive profundity, This Is How We Bite Our Tongue runs until January 13th and represents their first major appearance in London since Powerless Structures sat on Trafalgar Square’s Fourth Plinth in 2012. Below, we discuss found objects, narrative threads – and disrupting curatorial nonsense with laughter. 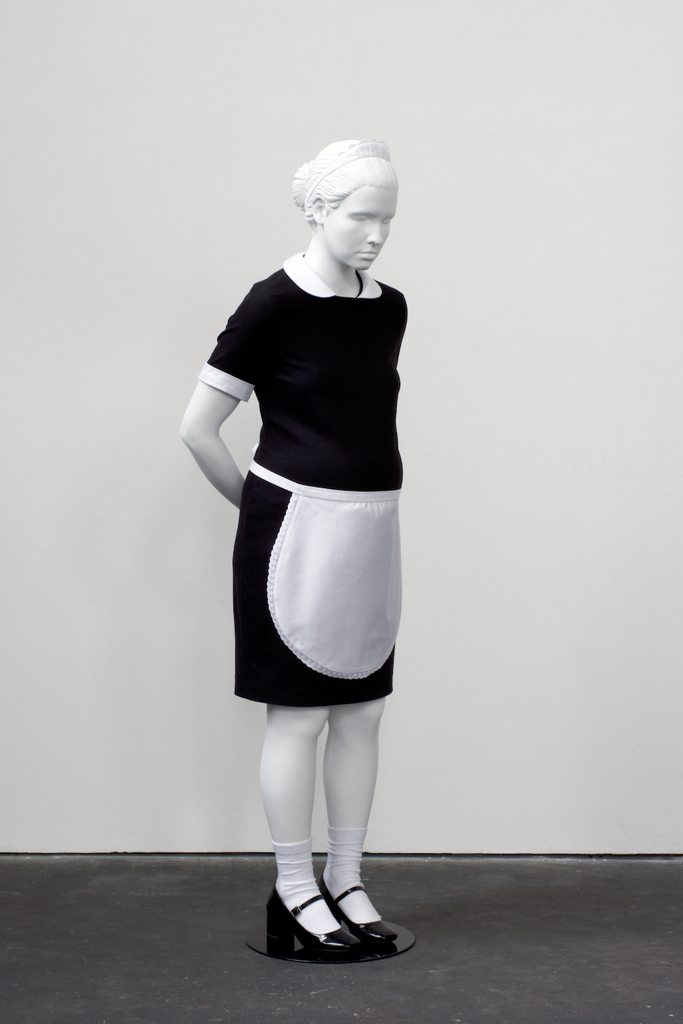 I’d love to know how the idea of the found object moves through your work, and how you understand its significance in a tableau like the one you’ve set up in the downstairs gallery around The Whitechapel Pool.

We often incorporate found objects or parts of readymades in our work as either a small component within a large-scale installation or as a part of a single sculptural work. For example, when staging a domestic interior like the one we did at the V&A in 2013, we used objects and artefacts from the museum’s collection in order to tell a story. To create the home of Norman Swann, our fictional protagonist, we also searched for pre-existing interior objects, like sofas, lamps, and rugs that conveyed a bygone era in order to comment on its disappearance and related cultural shifts. Found objects like books or the contents of a nightstand drawer became bearers of an individual’s history and at the same time created links for the audience to connect with. Other times we end up fabricating an object ourselves that appears as if it were a readymade. This can be seen in our recent series of diving board sculptures, which resemble the image one might have in one’s head of a diving board, rather than any particular existing model. We strip it down to its essential physical qualities.

In The Whitechapel Pool, elements like the stainless steel ladder leading into the pool and the lone fluorescent bulb that has fallen down are readymades that contribute to the abandoned ambiance of the installation, whereas the freestanding car seat only looks like a real car seat but gains a new significance through having been cast in a new material, bronze. Many of the tiles in the installation have been hand-painted so that they look old and scruffy and cracked.

To what extent do ‘origin' stories around the objects in the installation tell themselves, and how do those narratives interact with the more prescriptive ones? For instance, Pregnant White Maid, or Too Heavy versus the wall notice of Whitechapel Pool, explaining that the pool was built in 1901, through social reform, refurbished in the ‘50s and so on?

We don’t set out to attach definitive or absolute narratives to the objects in this or any installation; on the contrary, we welcome the audience to make their own connections and interpretations. The Pregnant White Maid is an ambiguous figure: she could be bearing hope for the future, or there might be some anxiety accompanying her situation. It’s unclear how we should feel about her pregnancy. The story of Too Heavy is also not easily pinned down: in the context of the pool, it could signify the end of social play and recreation, but it could also symbolize a kind of physical or psychological weight. It’s up to visitors to put things together in terms of what the sculptures mean to them or how that meaning shifts according to the different constellations in which they appear. Too Heavy is there mainly to disrupt the linear logic of things. With the “short history” wall text of The Whitechapel Pool, however, we’ve employed text to build up a more clearly structured, chronologically organized narrative. Normally you would find a curatorial description of the works displayed on such a sign board but we opted for telling our fictional history of the pool instead. To include this kind of text creates a conceptual frame for the exhibition that grounds it in the local London context and the current cultural and political situation we’re commenting on in the show.

Humour lets us set new terms for considering various topics, and it serves as a visual language for communicating feelings of indignation, dismay, or frustration. It’s our sort of anger management. 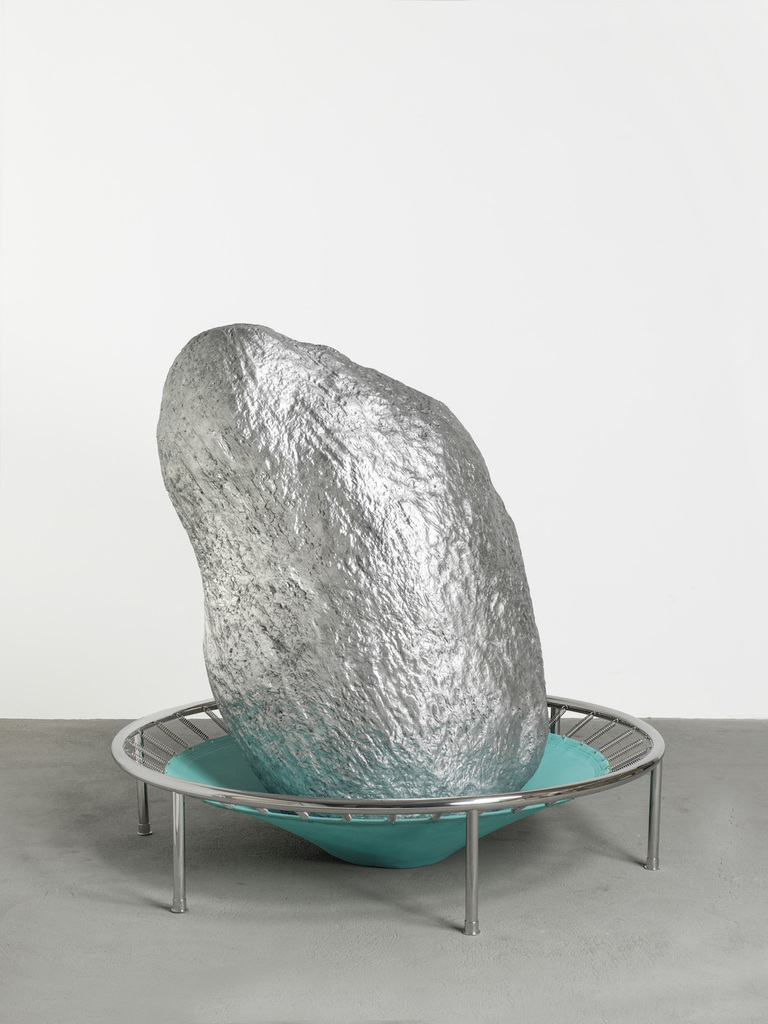 On the one hand, the strong narrative drive — either through a plaque near the pool, or told visually as with a baby beneath an ATM machine, two pairs of empty trousers — is funny. It lets the viewer feel that they’re getting a sort of joke, or putting together pieces of a puzzle. On the other hand, the themes are frequently more heavy-hitting than comical (gentrification, poverty and so on). To what extent does humour work in your practice as a vehicle for disrupting a kind of poe-faced, critical gaze? How does it work beyond that?

Humour for us works as a bridge or entry point into serious topics that are not usually considered from that perspective. By using absurdity, we seek our own terms on which we can address these serious subject matters. It can certainly be a disruptive force, and it can serve as a tool for debating or subverting certain systems or conventions. We also use absurdity to displace or alter certain designs, or to re-imagine seemingly inflexible structures. All of these strategies can open up new perspectives and help allow people to reconsider the familiar. Humour lets us set new terms for considering various topics, and it serves as a visual language for communicating feelings of indignation, dismay, or frustration. It’s our sort of anger management.

This isn’t the first time you’ve made or placed art in an unexpected setting, or made a space 'for art’ (a gallery) into a different kind of place. Here, it’s a disused/soon-to-be-redeveloped swimming pool, but you’ve created art in/art from luxury clothing stores, waiting rooms, nightclubs in the past. What’s interesting about playing with settings, on those terms, for you? What happens when you do?

Some of our transformations of institutional spaces have included an abandoned night club, a prison cell, an airport, an art fair, a hospital room, and various domestic settings. We’re interested in the potential of architecture to morph into something else, and find it fascinating to consider which modifications are – or are not – necessary to produce a new identity of a space. By playing with the existing architectural features, by tweaking them or adding new elements, it impacts the environment in which the art objects are presented, which allows for different readings of the works. It also allows the audience to look at recognizable spaces with a changed perspective. Instead of criticizing the so-called white cube format we rather simply change it into something else. 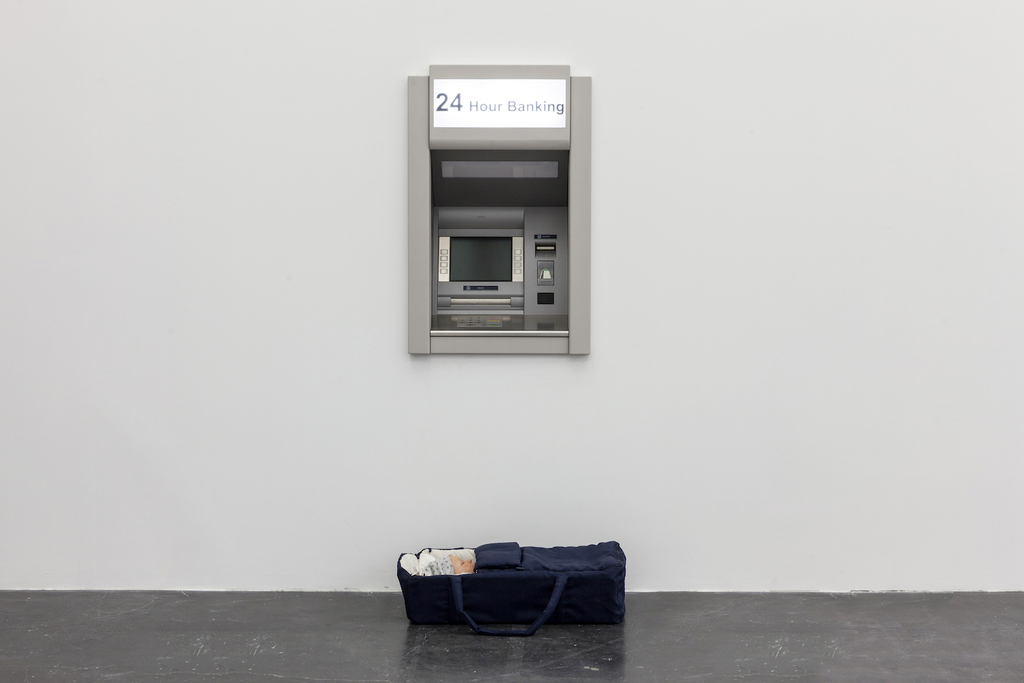 The Whitechapel Pool looks to be thinking about public/private spaces (community vs restricted clientele, free vs prohibitively expensive) but swimming pools are weird enough on that score themselves, what with everyone walking around nearly naked in front of strangers. Spaces like changing rooms and objects like urinals remind us that we’re all animals, who have to figure themselves in relation to much wider questions about money, society and so on than just their bodies. Are you thinking about that micro/macro equation in the ground floor installation? What can we do as individuals to counter issues like gentrification which can feel so overwhelming?

One can see the influence of global financial markets on local communities, for example. Or the impact of austerity policies on shared municipal spaces. These forces impact our lives in such complex ways. Staging the abandoned pool atmosphere is our way of searching for a new language to discuss these issues. And as individuals, engaging in dialogue can be one of the most productive ways to enact change. Our series of works entitled Powerless Structures all speak about the potential for changing existing structures. In the end it’s all up to us, as human beings, citizens, members of our different communities to make these changes. 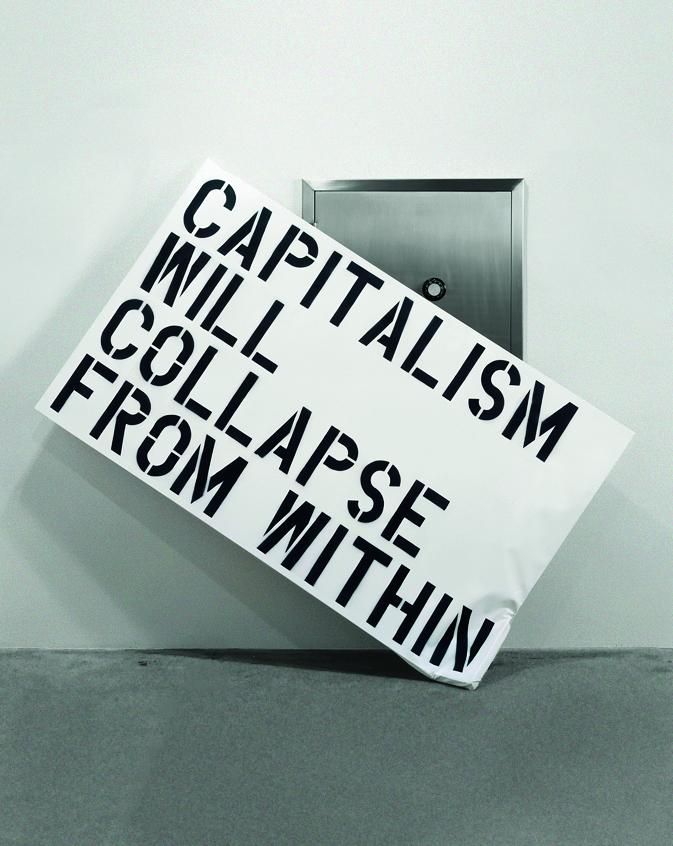