Andra Ursuţa’s Joy Revision does not take its name from the world’s foremost Joy Divison tribute band, but it is about how love can tear us apart. ‘Somebody told me that there was there was a law firm, specialising in divorce, and it was called Joy Division. I thought that was really good,’ she says, laughing. Here, rather than divorce, the exhibition revises art’s role in mortality, loss, and grief – themes the artist approaches with dark, dry humour. 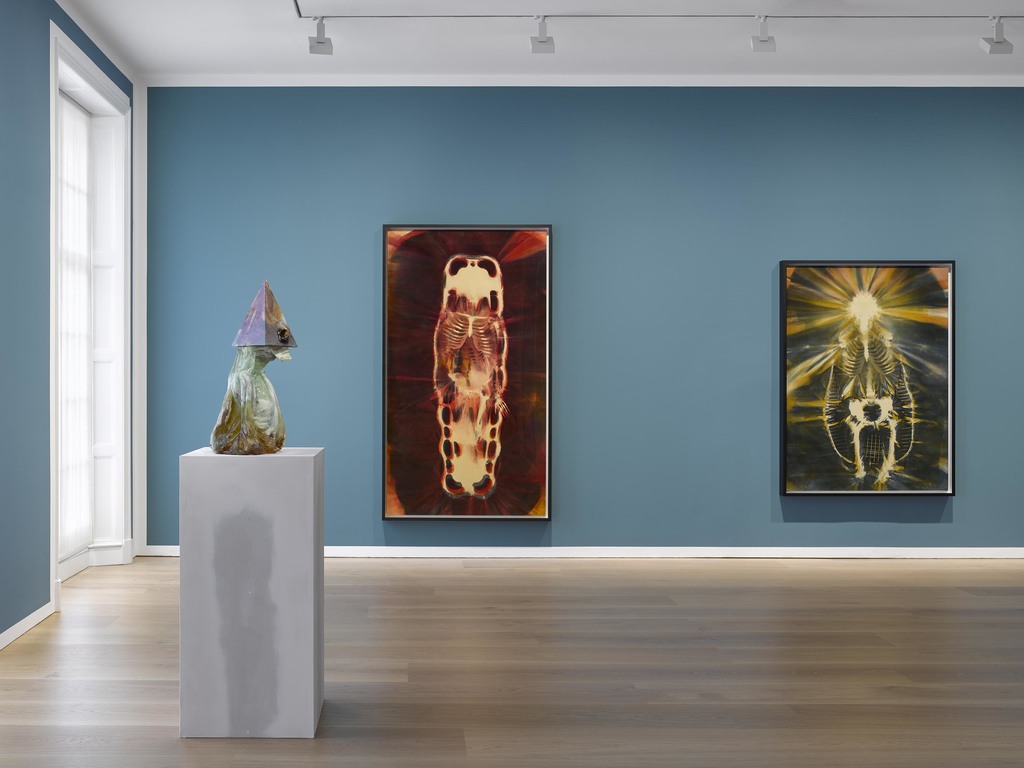 "You need levity somewhere, and you need to be able to make fun of the most horrible situation; otherwise, it will destroy you."

‘If you make a show about bereavement – which is what this is, essentially – you have to package these themes in a way that it doesn't just feel completely overwhelming, because it's such a hard thing to even comprehend and to deal with’, Ursuţa says. ‘You need levity somewhere, and you need to be able to make fun of the most horrible situation; otherwise, it will destroy you.’ 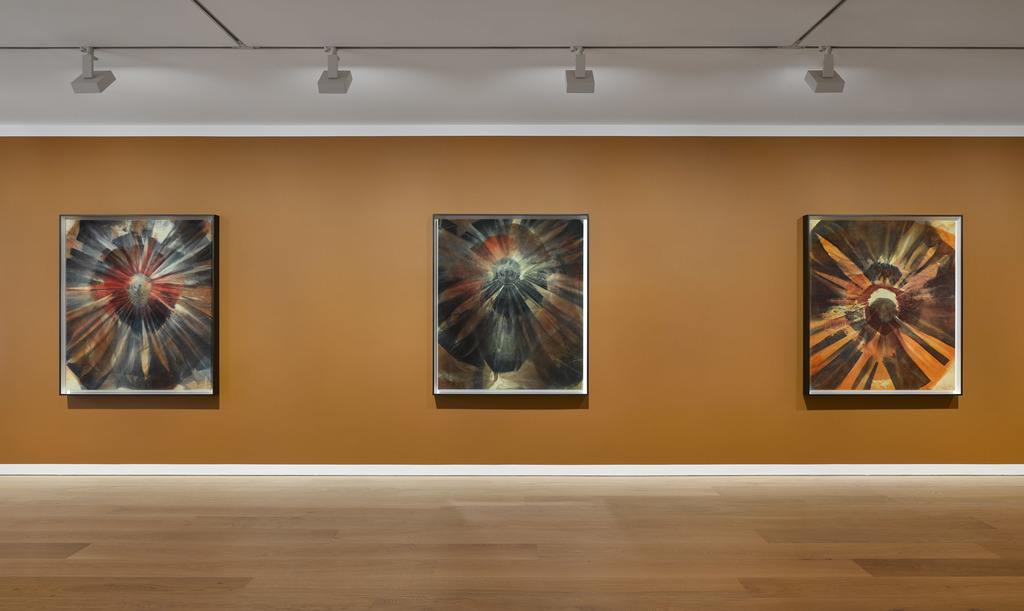 Even for an artist whose practice often involves casting her old clothes, her rubbish, and her own body in lead crystal, this is extraordinarily personal work. ‘My partner passed away at the end of 2020, completely unexpectedly. And when that happens, your brain just goes crazy.’ Enacting mind-altering states, the colours of Ursuţa’s photograms by turns evoke sixties psychedelia, sunflare and the dawn of William Blake’s Dance of Albion (c. 1794) – revelatory, ecstatic shades that clang against the solemn image of a skeleton in a spiny wicker chair. 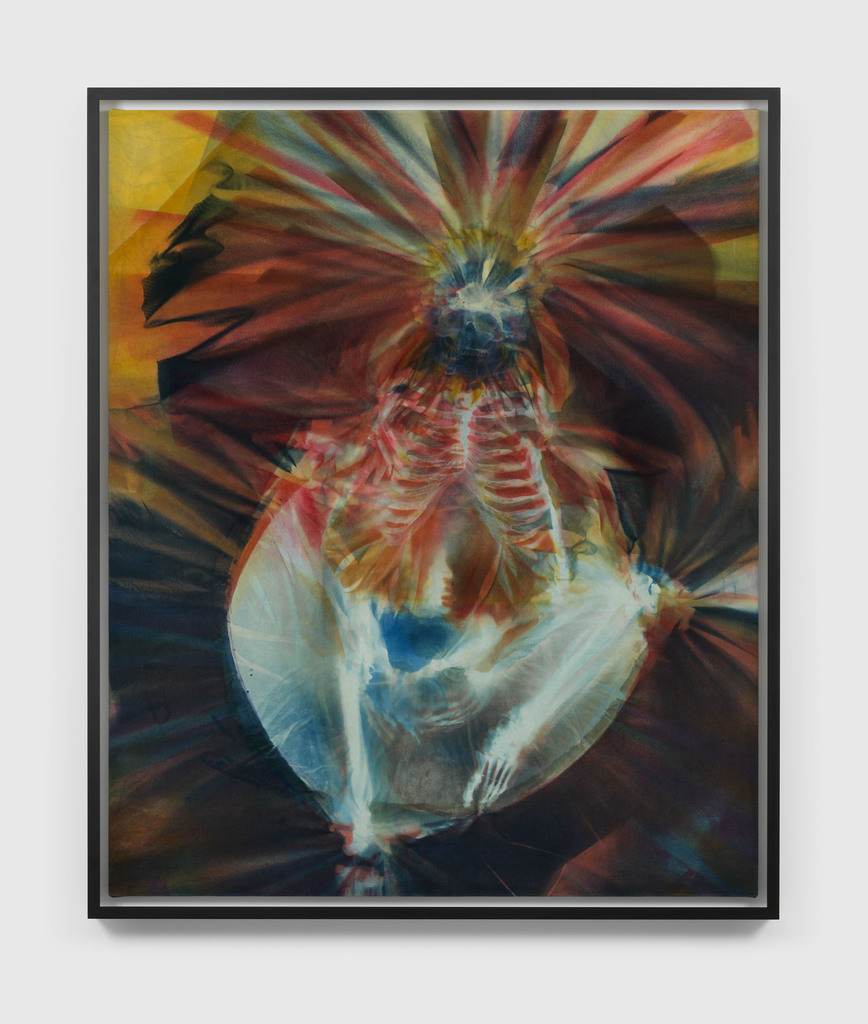 Created with photoreactive dye on plush velvet, rays of light around the skull conjure ritual headdresses, religious haloes or visionary third eyes – an effect that was created ‘purely by accident’ according to the artist. These beams of light are an impression caused by the folds of the fabric draped over the skeleton’s head, as the assemblage was captured by light from below; concealed in its makeshift cocoon, there is no way of knowing for sure how the eventuating image would turn out. 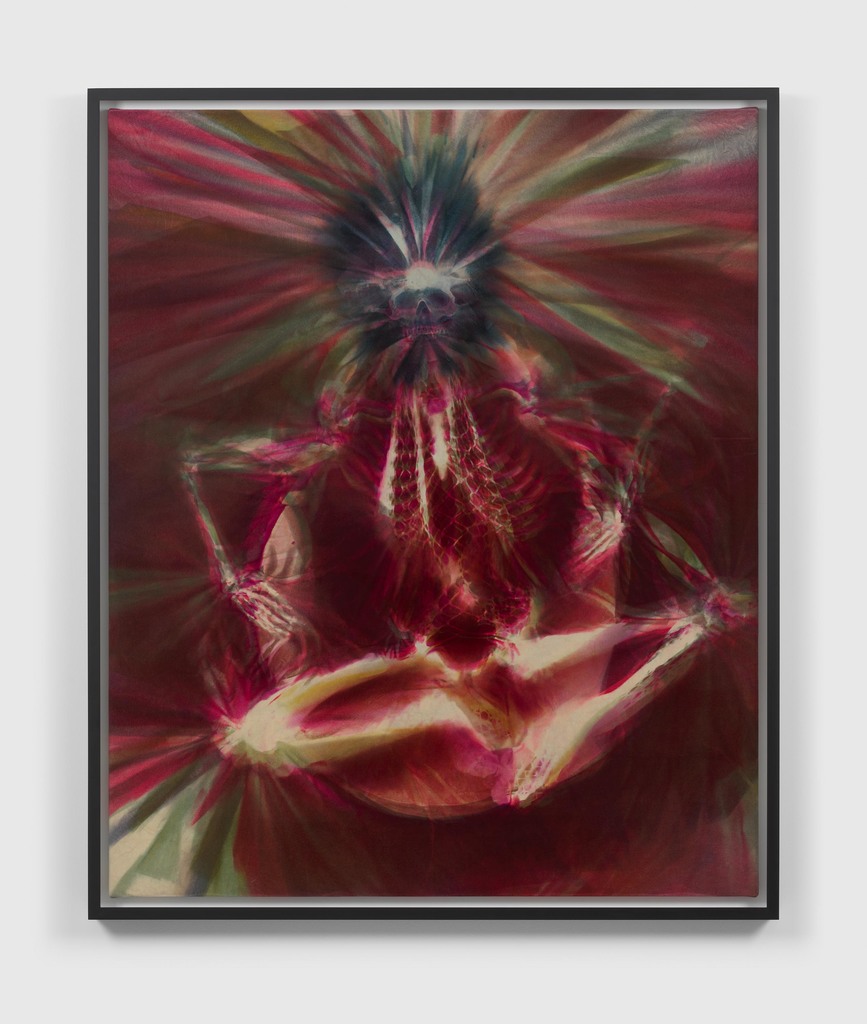 "Even when the other person is gone, your brain keeps firing away"

You could think of these veiled skeletal works as 2D sculptures, and they are in conversation with their 3D counterpart: Grande Odalisque (2022) sees the suggestion of a figure cloaked and cast in glass, reminiscent of Victorian mourning dress. This group of works puts the artist in mind of the Shroud of Turin ‘or this idea of Veronica's veil from the New Testament, where she wipes the face of Christ, and then the face is magically imprinted on the veil. This idea of the spontaneous image is very interesting to me.’ 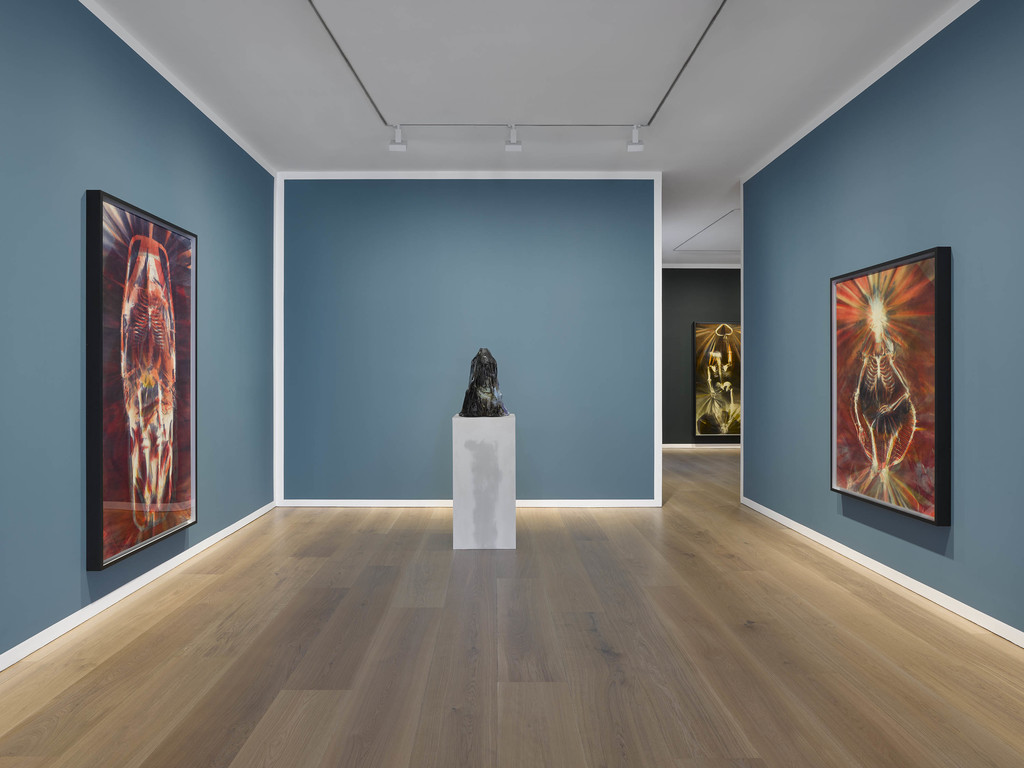 Adopting superannuated techniques, such as lost-wax casting and early photographic methods, alongside contemporary technologies like digital modelling, allows for spontaneity and chance to become an integral part of Andra Ursuţa’s practice. ‘There's always this tension between what is handmade and what has been made without the human touch’, she says. ‘I want to create the conditions in which something that I did not intend can happen, can surprise me or give me an insight – which, in a way, is a metaphor for looking for ghosts, because you’re looking for the foreign.’ Hung next to one another, the photograms appear as if excerpted from an infinite stream of experiments – or ‘Revisions’ – highlighting Ursuţa’s process as well as the final product. 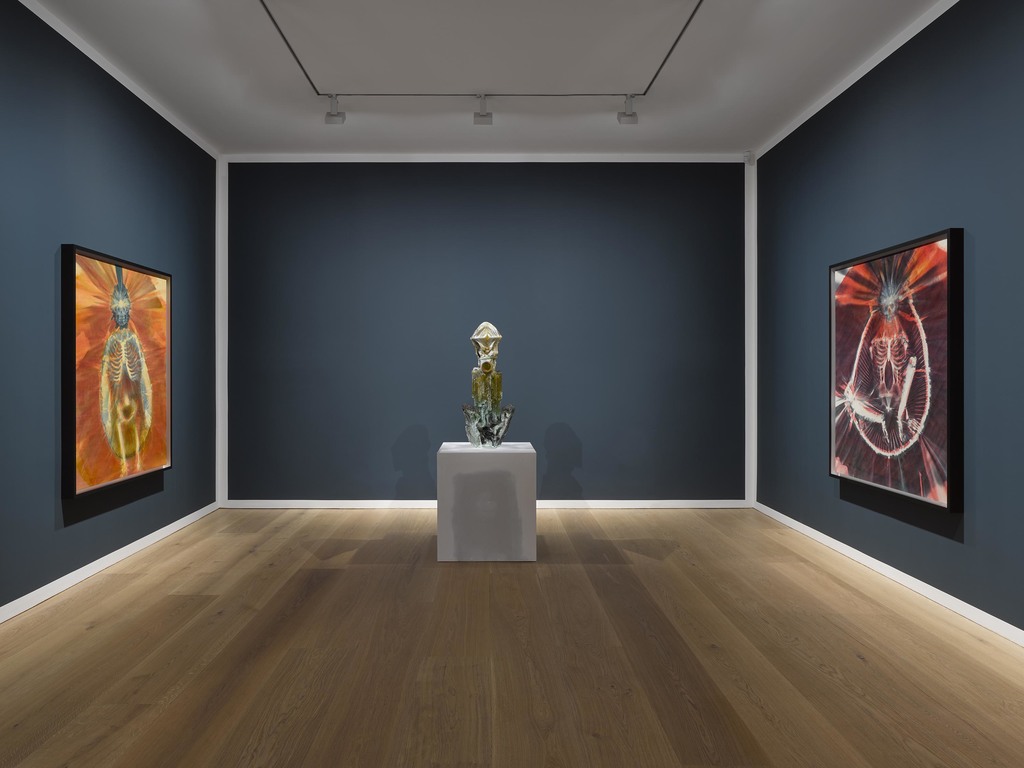 How does one find a visual language to capture the invisible, the unthinkable? Ursuţa talks about grief as if it were another kind of exposure. ‘Even when the other person is gone, your brain keeps firing away. And I think that that's what the ghost is – it's these circuits still being activated in your brain, and your brain, desperately and stupidly, trying to come up with explanations of why this doesn't feel exactly the same way. 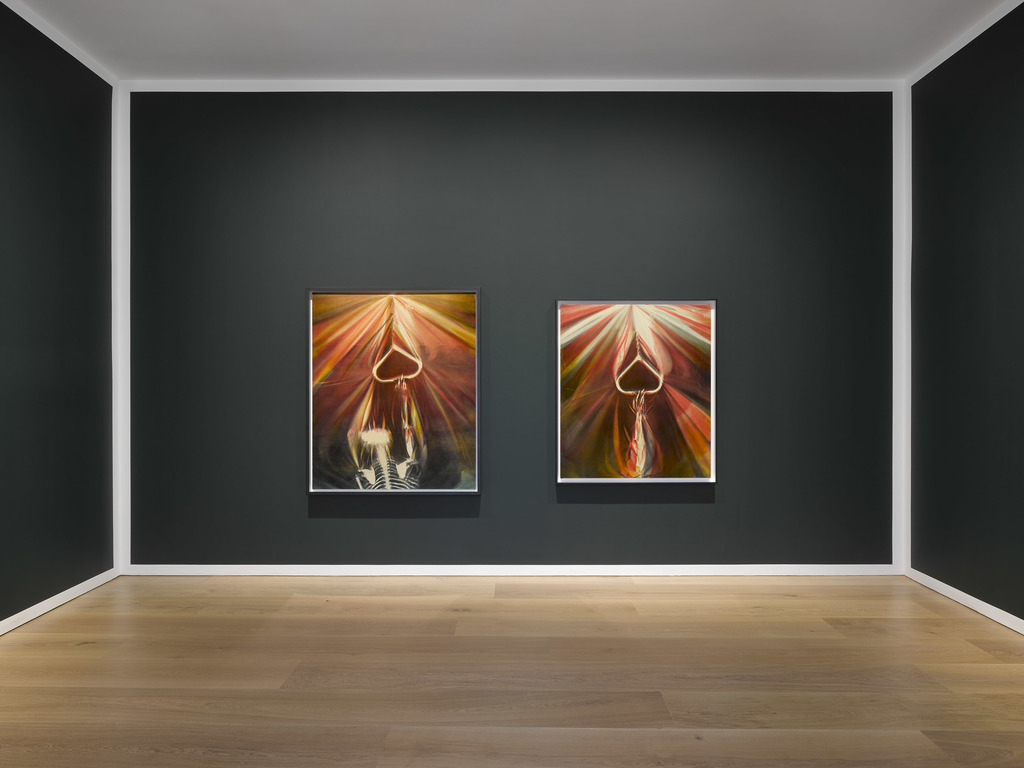 "For thousands of years, art was exactly this, it was a tool to address ideas that were too big to comprehend; to address loss, unspeakable loss and so on"

‘When I was making these works, maybe part of this openness I was looking for was also because I was hoping that one of them would really feel like a sign’, she says. ‘Of course, these are things that you can never have confirmation of, but you also can never have complete confirmation that it's not true. It's like you're just trapped in this search, which is exhausting and very painful. So I wanted to deal with that in some way. And I turned it into an aesthetic problem and a conceptual problem.’ 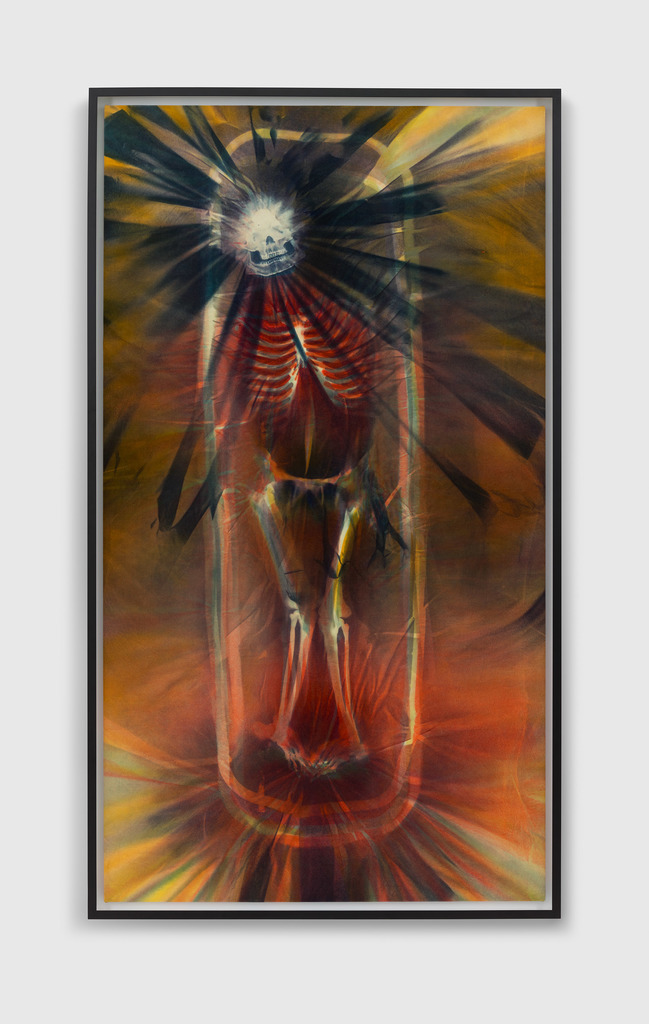 The aesthetics that Joy Revision most readily references are those of 1860s spirit photography, whose primary goal was to capture images of ghosts. The Spiritualist movement grew as many photographers experimented with effects such as stereoscopic images and double exposure. As old as photography itself, spirit photography presents an ongoing conversation between superstition and empiricism: many groups on Facebook today are dedicated to sharing photos of ‘Orbs’, for instance, and even as the ghostly light sources are explained as flash reflecting off natural camera artefacts such as dust, the question then becomes: Ah, but who put the dust there? Even the world’s biggest sceptic would have to concede that photography is a tradition in which art, science and spirituality collide. 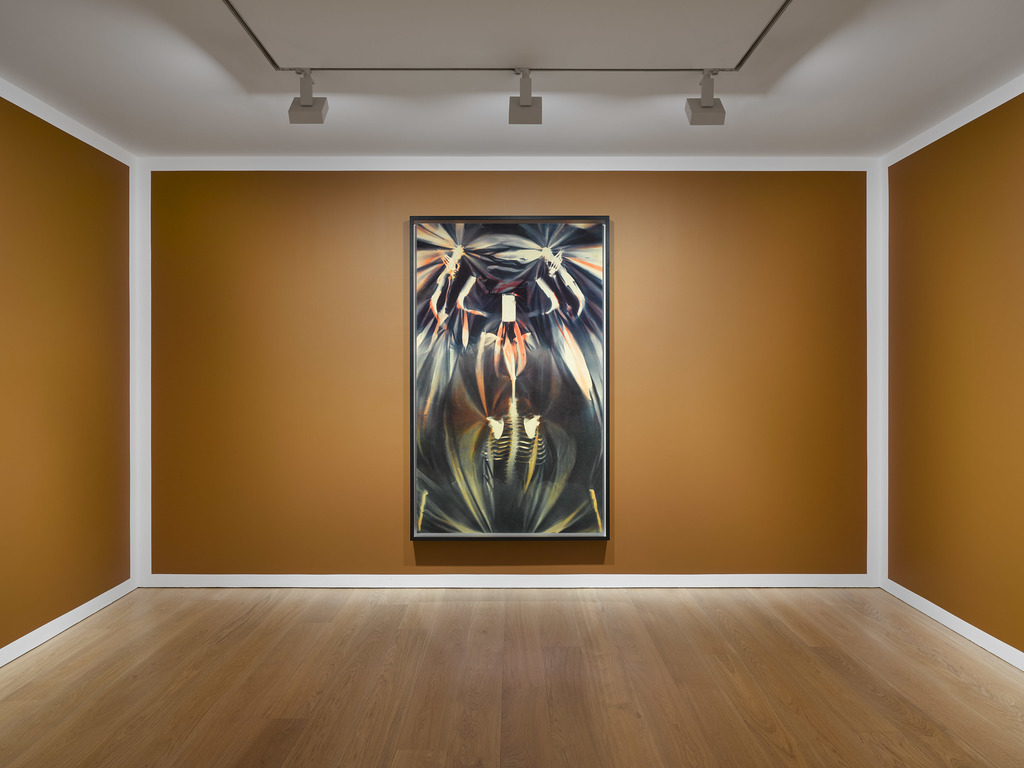 "it's the closest to a 'spiritual' show I've ever done"

Yet you could also argue Ursuţa’s aesthetic and conceptual problem is older still, as old as shadows. ‘For thousands of years,’ she says, ‘art was exactly this, it was a tool to address ideas that were too big to comprehend; to address loss, unspeakable loss and so on’. The artist’s oeuvre is full of tools, from the Canopic Jerrycan (2021) to climbing walls (Alps, 2016); multiple works of clothes made of coins; the grim ribcage, public bins of Divorce Dump (2019), shown at the Venice Biennale the same year; something called an Orthodoctrinator (2014), which looks like something whose usage you don’t want to know. But Ursuţa is right, none of these works point to art as a tool in its own right, ‘as something that can help us’. Even so, she does not want to restrict its interpretation. ‘It's still contemporary art. I'm not making religious art here.’ 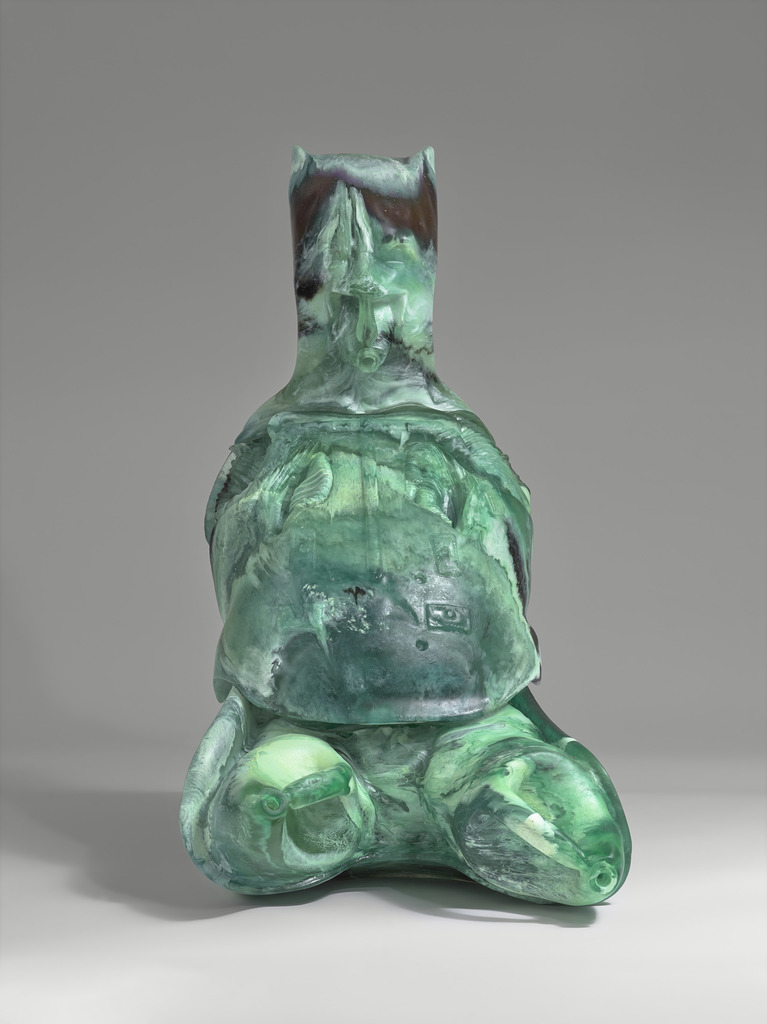 Nonetheless, grotesque as the stations of the cross, each panel tells the same unshakeable story. Joy Revision flickers with religiosity and the sculptures could have been salvaged from ancient ruins. The impish Misintegration sees a Batman with water bottles for thighs sitting on a plinth like a marble torso from a Roman temple. The lead crystal at the base of Habit Hole is the colour of oxidised bronze on a long dry fountain. Other busts have pyramid heads. Indeed, for all its angular irreverence, there’s a lingering sense of something velvety soft and reverent here. ‘I suppose it's the closest to a “spiritual” show I've ever done, or maybe the only spiritual show. And if you had told me three years ago that this is what I would be doing now I would have laughed. 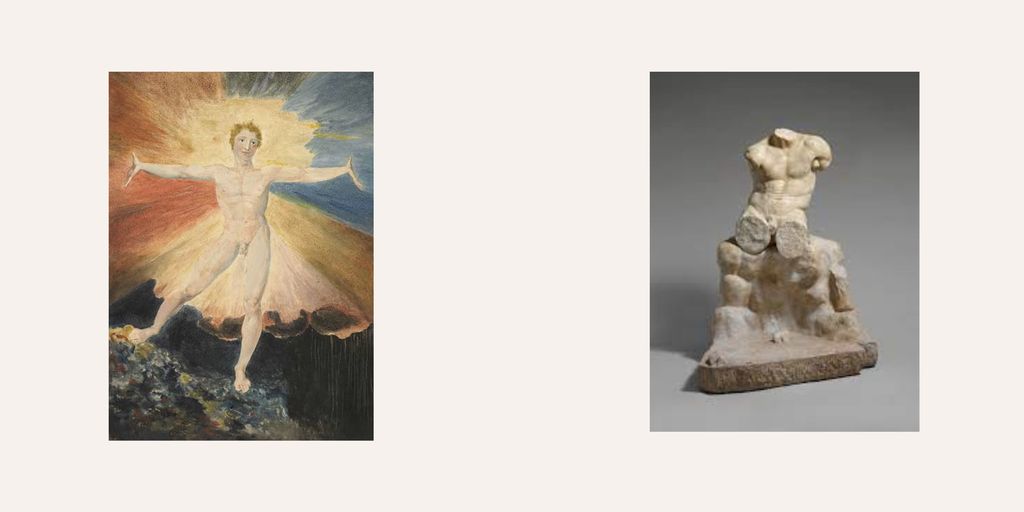 "Sometimes you really have to deal with the idea that you feel the most uncomfortable with."

‘As artists, I think we should try to create something that resembles permanence. And that's what I want to do. That's why I made this show. If that somehow leads to some sort of spiritual realisation, okay,’ she says. ‘Ideally, next I would do a very gross and hilarious show that has nothing to do with religion. It's just- you have to be open. Sometimes you really have to deal with the idea that you feel the most uncomfortable with.’

Yes, being open to randomness and the discomfort that it brings is a way of reaffirming life, in all its dark, glorious perversity, its flashes of pain or conclusiveness, its brilliance. ‘I felt like I really exposed myself in a way that I wasn't comfortable doing’, the artist says. ‘But it also felt like there was no other way.’