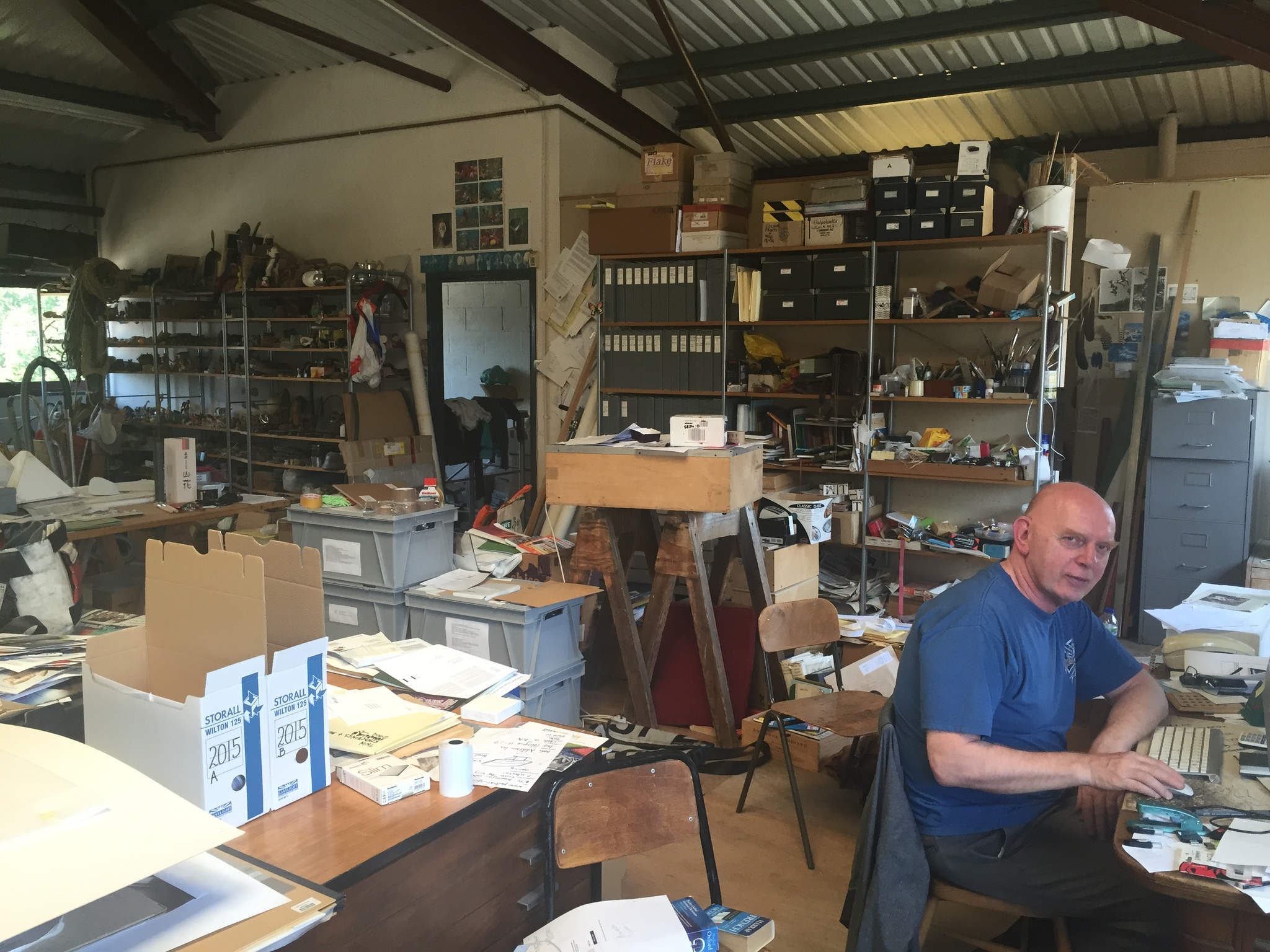 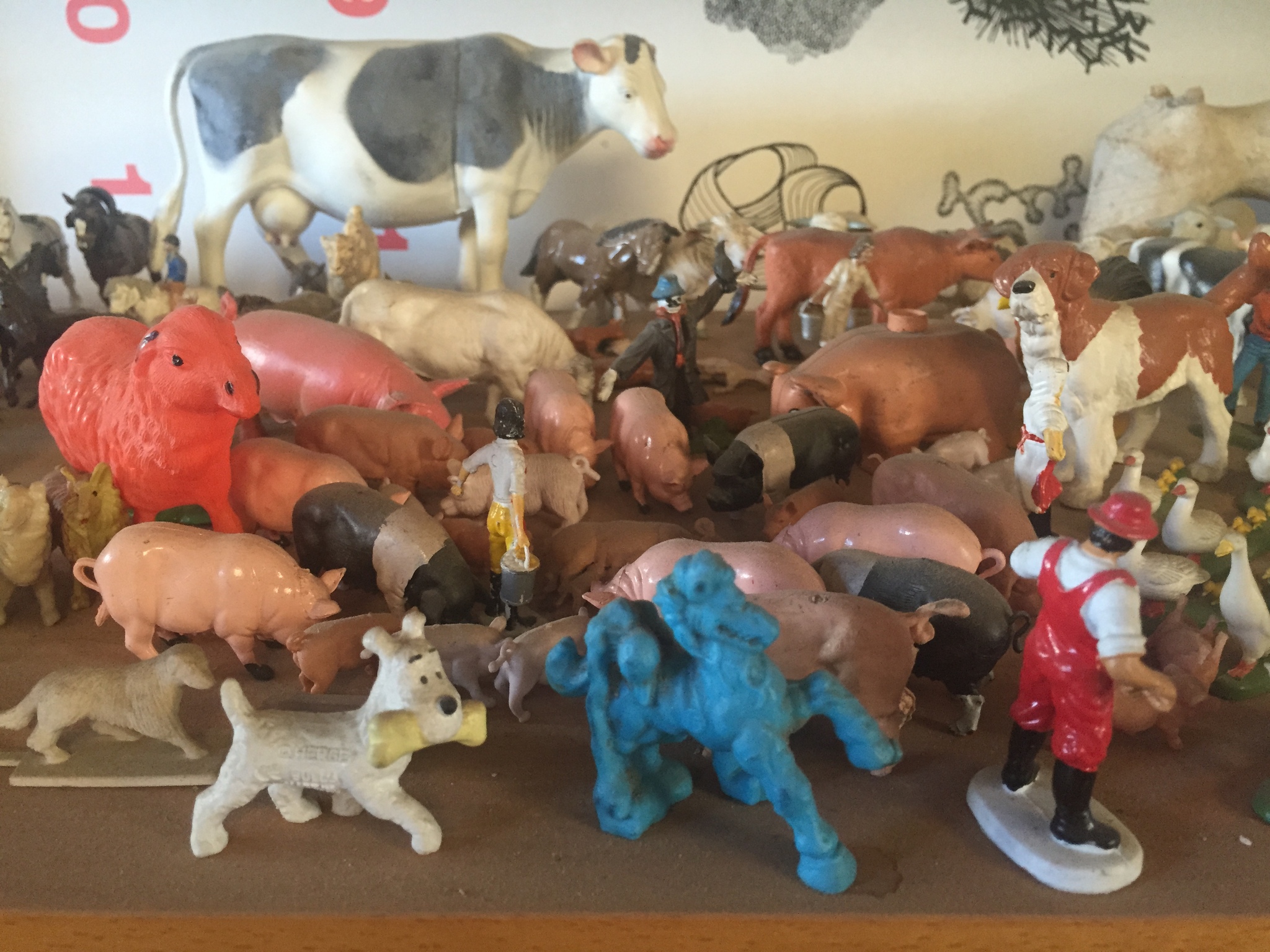 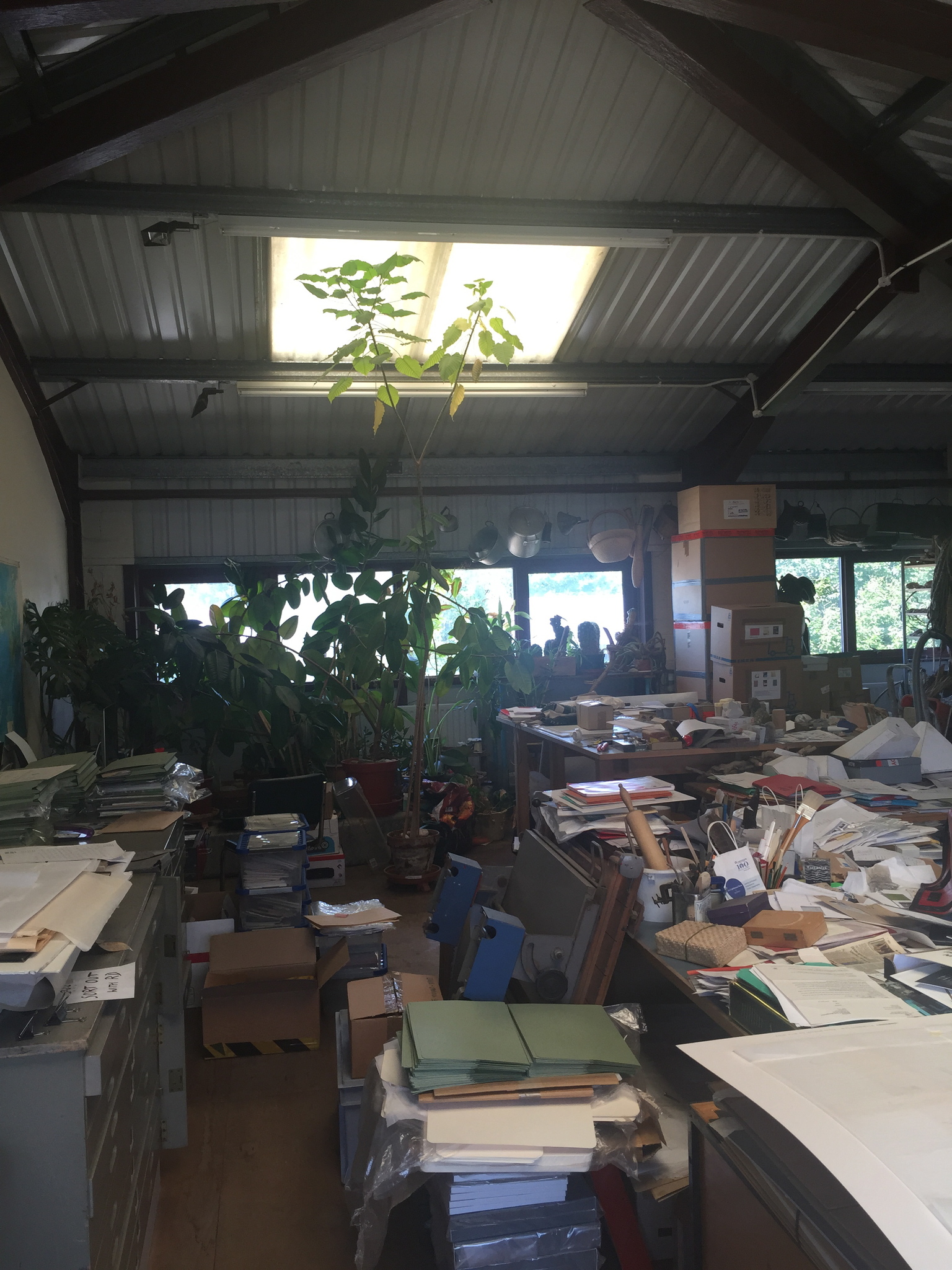 One corner of the studio holds a collection of plants that he has grown from seed.

Plinth writer and curator Chloe Grimshaw caught up with British sculptor Richard Deacon during a rare moment back in the UK, following his recent trips to India, China and Switzerland to work on new shows and exhibitions.

Walking to his Herne Hill studio reveals a panoramic view of the new skyscrapers that have emerged in the City of London, from the Gherkin to the Cheesegrater. Having lived and worked in South London for over forty years, Deacon shares his views on how London and the art scene has changed during this time.

London in the last fifteen years is not unlike Paris at the turn of the century in the 1900s or New York in the Fifties. The ambition and the opportunities that have appeared here are really, really incredible and I think it's fantastic to have been around for it. 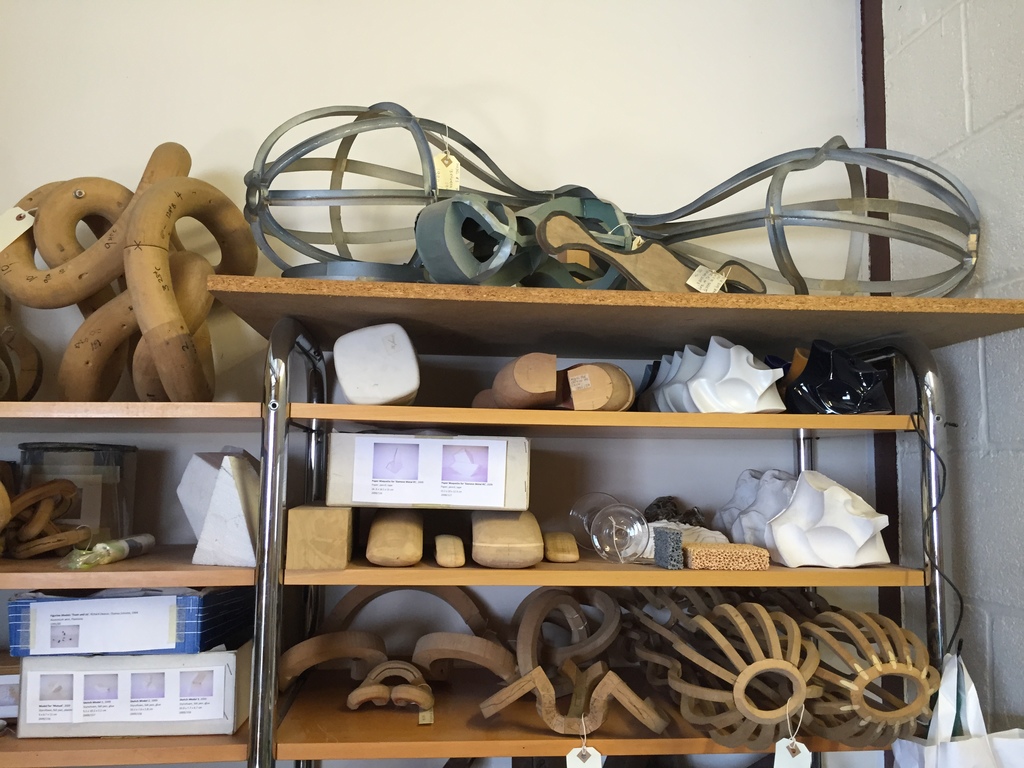 Models for some of Richard Deacon's monumental sculptures.

What was the art scene like in London when you were starting out in the 1970s?

In the Seventies, the gallery scene in London was kind of dead, it was all happening outside galleries. There’s a very good Acme film about the first 10 years of Acme which gives you a feeling of what London was like in the 70s, with buildings patched together with corrugated iron and desolate streets, but it was artists initially that got things going, rather than gallery initiatives.

How does it compare to the current gallery scene in London and New York?

I’m in the process of preparing a talk for China about it, called ‘London Calling’ because I think the last fifteen years here in London have been just amazing. London in the last fifteen years is not unlike Paris at the turn of the century in the 1900s, or New York in the Fifties. The ambition and the opportunities that have appeared here are really, really incredible and I think it's fantastic to have been around for it. 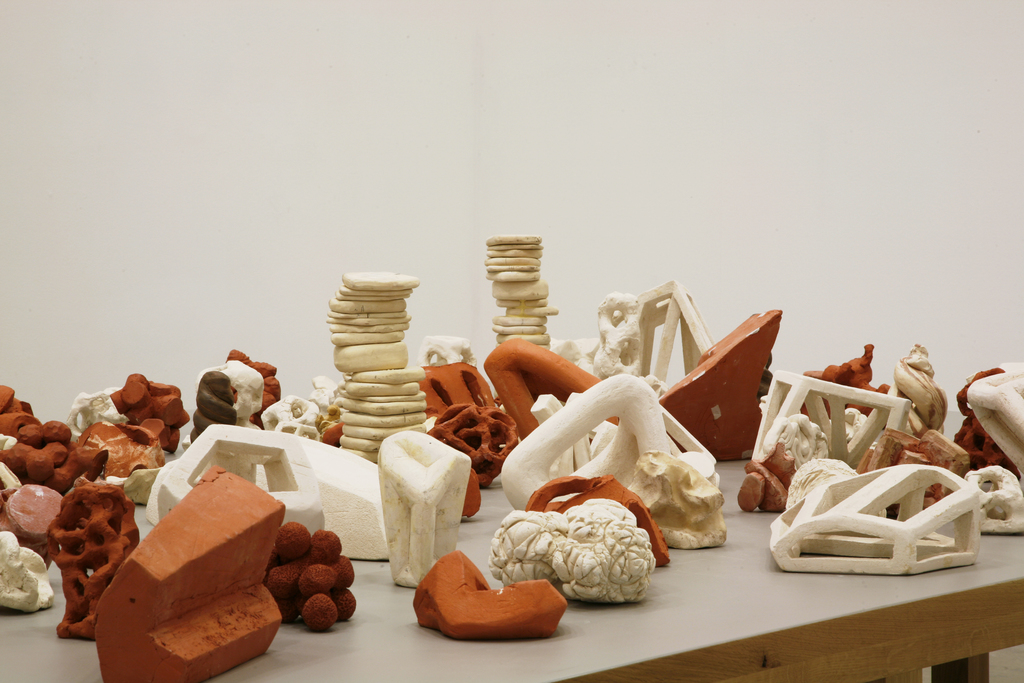 Can you outline a typical day in the studio?

Because I travel quite a lot, it’s hard to have a typical day. I try to get here for 6 o-‘clock. Then I can have 2 or 3 hours working here at the computer or at the table over there. I wouldn’t really start physically making stuff until later in the day. In a way I wish I had an office that was separate from the studio because there is a compulsion to come here and deal with all of the emails and to get that out the way before you can start working. When you’re travelling a lot, that backlog of activities tends to build up a lot.

Can you describe your new edition ‘Icon’?

Matthew Perry, who works on the wooden sculptures with me, was trying to work out some quite complicated structures and twisting a smaller piece of wood, which began a whole lot of other things. We’d done a couple of tests and then Matthew came back with those shorter and longer samples with a 180 degree twist along a length of wood, left-handed and right-handed.

I thought when he gave them to me that they were such great objects that it would be good to do something with them in themselves. When Jonathan Watkins (Director of Ikon Gallery) and Paul Franklyn (Curator of Plinth) contacted me about the edition, it felt like I had something already. These twisted wooden pieces are stored in my studio, so I’ve been looking at them very often as I pass by them. 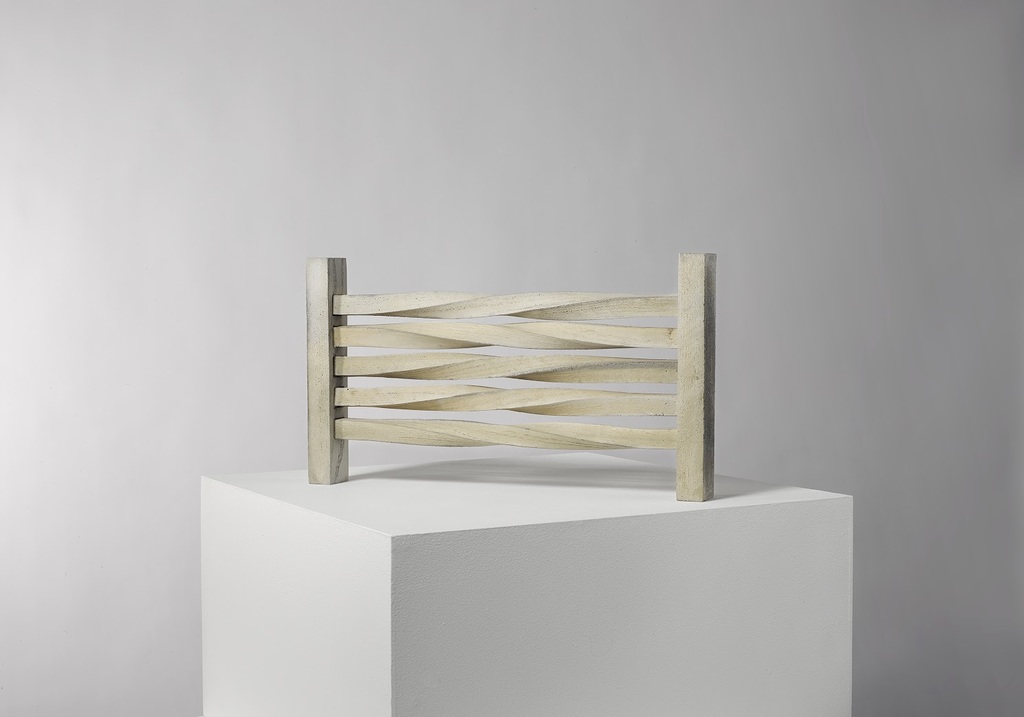 The first idea for ‘Icon’ was as a 3D scan but we quickly realised it wasn’t going to work out. Kit Grover, who produced the edition, suggested making it in cast concrete, on the basis of a sample that he had in his office. He made the test and it introduced another language, for example in the way that concrete is used on the South Bank, that brutalist use of shuttering, which is something I’d always liked, so that became a sort of subtext.

How important is it for you to be seen as a fabricator?

I think you can overdo it and I quite like the way that overdoing it undermines the structure and stops it being too literal, although there’s definitely decisions about where you put your rivets in and they do form a decorative element within the structure. 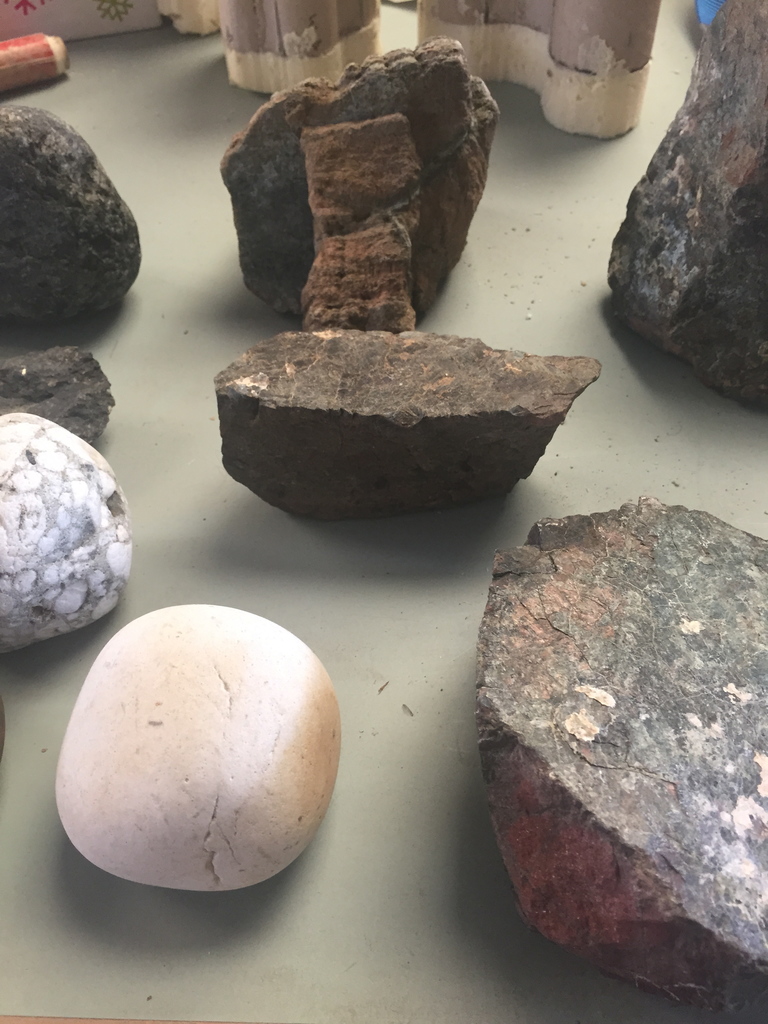 Part of Richard Deacon's collection of minerals, stones and rocks.

I think this is motivated as much by curiosity as anything else, although there are things on these shelves I’ve had since I was four or five years old! A lot of them are found, some are bought and they’re not necessarily easy to distinguish between. There’s a bit of memory, a bit of autism and a few samples of work.

Within the studio are a huge collection of objects, from ancient rocks to Play Mobil figures – when did you start collecting and how has this influenced your work?

I think this is motivated as much by curiosity as anything else, although there are things on these shelves I’ve had since I was four or five years old! A lot of them are found, some are bought and they’re not necessarily easy to distinguish between. There’s a bit of memory, a bit of autism and a few samples of work.

I’ve always been impressed by architects offices which have material libraries and some things in my collection are bits of inspiration, or sources for ideas about how you might begin to put things together. On the shelves, there’s obviously a division between domestic and wild and also marine and land-based, with minerals on the right and organic stuff on the left and on the far right it’s much more ethnographic, with heavier ones on the bottom.

It’s not systematic; although I did used to collect stamps when I was a boy. The problem with collections’ is that once you start, you eventually want to finish them off; you want to get them collected. I feel for collectors because they really can’t control their world. I think the reason for collecting is having a bit of the world that you can control.

When your children were born, this seemed to revive your interest in toys and collecting – can you describe this process?

When my children were small, I got rather upset by the poverty of a lot of current toys like Play Mobil horses and elephants and how non-specific they were. I travel quite a lot and used to go to toyshops all over the world and I began accumulating plastic toys to bring back for them. When they grew out of them, I reappropriated the collection and continued adding to it. Those are also my mother’s zoo animals in there somewhere. It was a bit do with wanting to have things that were specific.

When you travel, do you have a specific goal in mind – perhaps caves carved into the rockface in India, or carved Buddhas in Sri Lanka – or do you just find things to collect on the way to a new show opening or exhibition?

This studio table is where I experiment with materials and I’m starting to accumulate quite a lot of stone, which is an indicator of my developing interest. I went to the Himalayas and I came back with a suitcase full of rocks that was incredibly heavy, it was a ridiculous thing.

I do tend to come back with things and also with seeds. Some of the plants over there are grown from seeds that I’ve brought back. This big tall one was a seed that came back with me and then you take on a responsibility for it. There’s a whole big packet of things that I was going to throw away and then I decided that I’d give them a go – I don’t know what this plant is going to be but it’s really quite exciting.

'Icon', by Richard Deacon, is available to pre-order now, for purchase from 11th of February 2016.

Richard Deacon will be in conversation with Dr. Gilda Williams at the Plinth Gallery on the 3rd of March. Book tickets here.