Leave the tube at Bond Street, and the air is already crackling. When they said that the streets of London were paved with gold, they were talking about Mayfair; people who look like computer simulations walk the immaculate pavements, lined with boutiques offering to meet the impossibly specific requirements of a Borough-which-has-everything (does anyone really live here?), the windows offering snatches of handbags, Agas, salon treatments… How much? Whatever you’re imagining, double it and add a zero for good measure.

I walk to Davies Street, past a hundred exquisite shop displays, mannequins each wearing more than my year’s salary, to see a different girl in a window. I say ‘different’, but in many ways she is just the same. 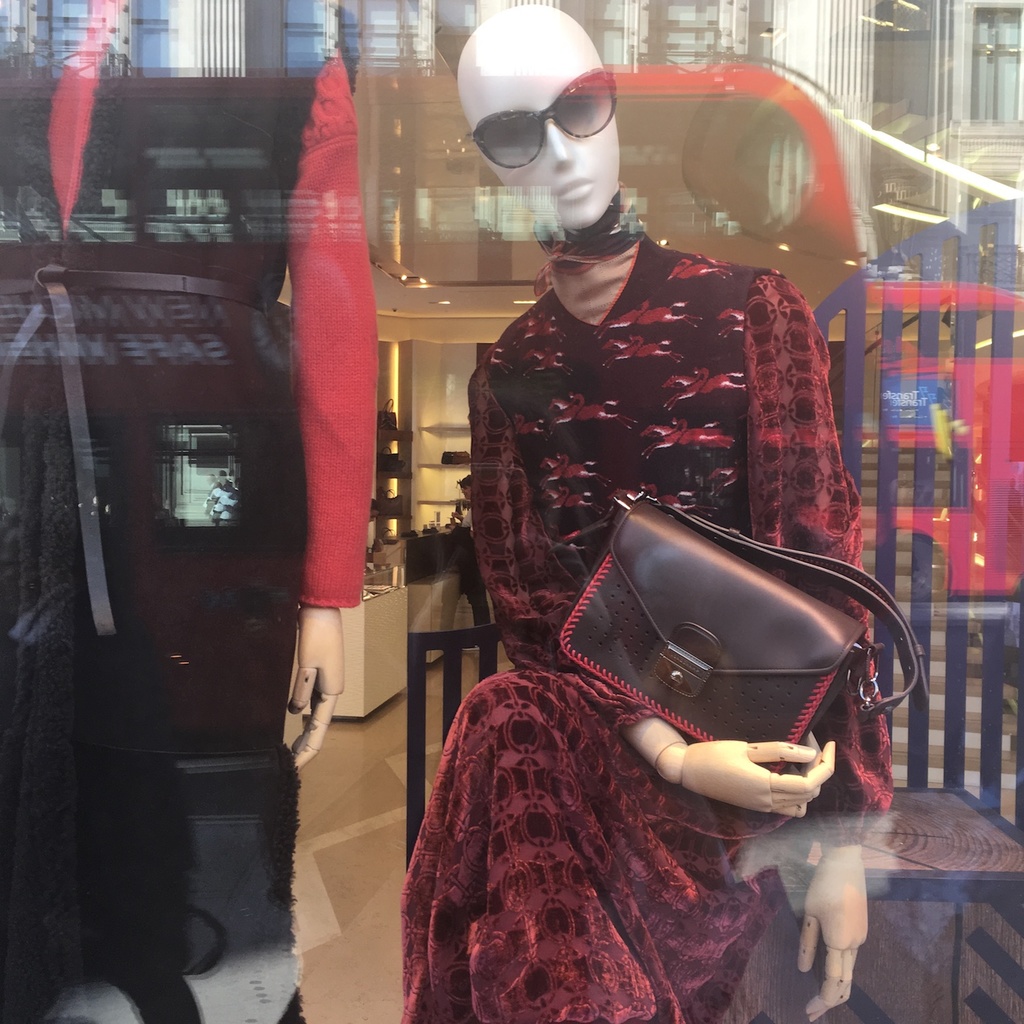 Anyway, the masochist in me is fascinated by this part of the city – call it reverse snobbery, plus a kind of intoxication. However pleased I might be with my outfit, or my hair (Rich Hair is a phenomenon, have you noticed? I don’t have it) when I leave the house in the morning, my rare excursions into the area never fail to function like a floodlight on a crime-scene in which I am both the crime and criminal. Mayfair is the enormous fluorescent light bulb above the elevator mirror of life, and it makes me bolshie – like a race you know you’ll never win might prompt you to saunter around the track rather than puff to keep up. I saunter around Mayfair, revelling in the feeling of being grubby and in the wrong shoes. I walk to Davies Street, past a hundred exquisite shop displays, mannequins each wearing more than my year’s salary, to see a different girl in a window. I say ‘different’, but in many ways she is just the same. 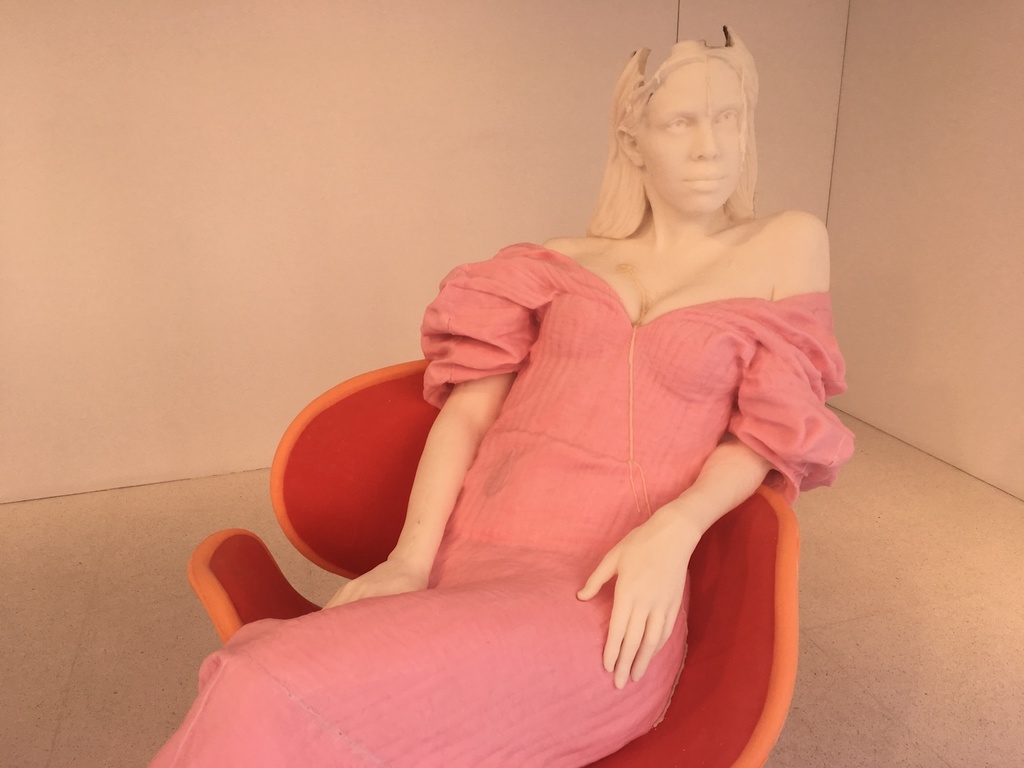 This is Dasha, by Urs Fischer. Bigger-than-life-size and cast in paraffin wax, this effigy of an infamous art world patron – and ‘personal friend of the artist’ – is on fire. Because it’s a candle! Don’t call the fire brigade. Apart from the fact she’s alight, she looks very at home in the gallery’s window, and in her wider surroundings. If she were walking, it would be a saunter – but because she’d be where she belongs, rather than defiantly out of place. She’s leaning right back into her wax chair, wax arm idling on wax arm rest, wax legs in wax heels crossed beneath her wax pink evening gown. She’s practically lying down, and if she could see you, she’d be looking you square in the eye.

The real Dasha Zhukova is a billionaire. International art-world darling (just don’t mention the chair incident), magazine editor, founder of Moscow's Garage gallery and recently divorced from Roman Abramovic, it was Zhukova who suggested herself as the subject for Fischer’s latest project. She’s not the first art world heavy-weight to be made in wax by the artist, but – maybe crucially – she is the first woman. Dasha’s context is important, but the work’s robust on its own terms and without needing to know who funded what, or married whom. Accidentally or otherwise, Dasha and Dasha both look a lot like the mannequins in the windows I passed to visit her. Those 3D coathangers are designed to look like anyone and no one at once: the shopper must be able to imagine herself in whatever the mannequin’s wearing, but also feel bad enough about her own body to want to fix it with whatever’s wrapped around the plastic one. Within London and across most of the world, a western ideal of beauty holds strong as the triple threat: White. Thin. Young. Dasha! She’s beautiful. It’s not her fault. 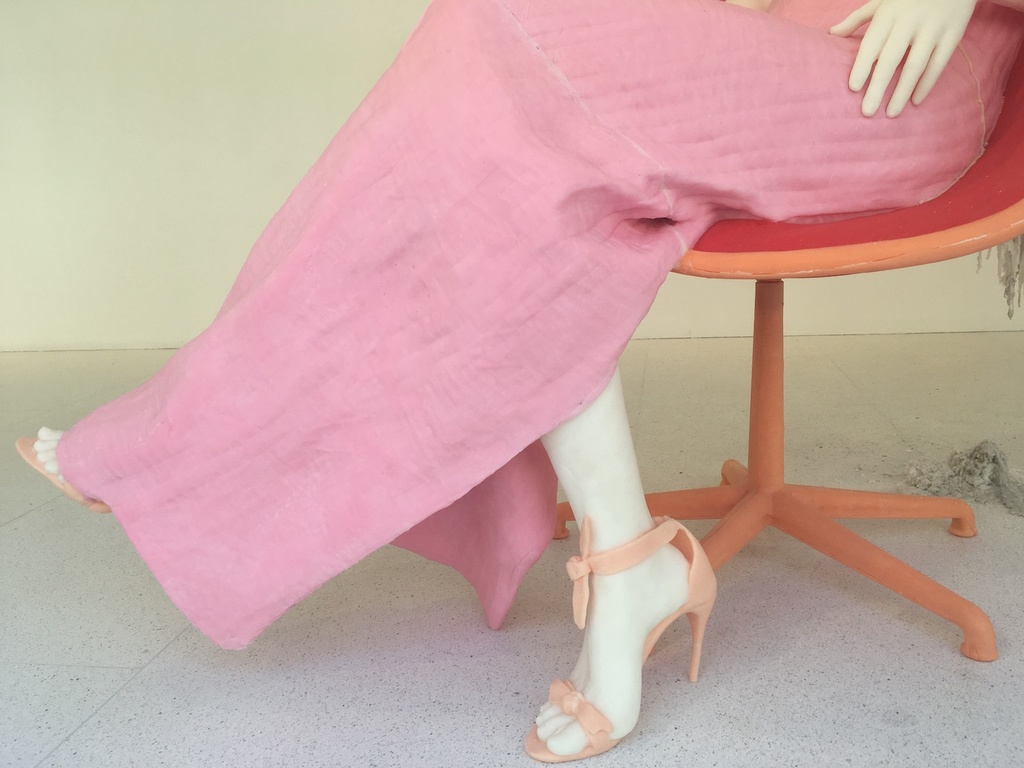 It was brave of Zhukova to volunteer herself as the subject of the sculpture, and to submit to having her image burn before our eyes. The Dasha candle has been burning (10am till 6pm, midnight during Frieze) since September 12th and will continue to do so until November 3rd, and brings to minds plenty of associations besides mannequins. It feels like iconoclasm, and idolatry at the same time. In everyday life – on posters, on television, online – we make image after image like this, representations of women without representing any one of them (often not even the one on which the image is based in the first place). Recent developments have seen brands opting for entirely CGI models, doing away with the bother of real bodies all together. So, while on the one hand, Fischer’s sculpture in Gagosian’s Davies Street window represents someone very specific, it’s hard to escape the wider context in which it, and figures like it, are displayed. Dasha is Zhukova, but she’s also an icon amongst millions in our unofficial shrine to female beauty. Even billionaires burn on that altar.

Dasha is Zhukova, but she’s also an icon amongst millions in our unofficial shrine to female beauty. Even billionaires burn on that altar. 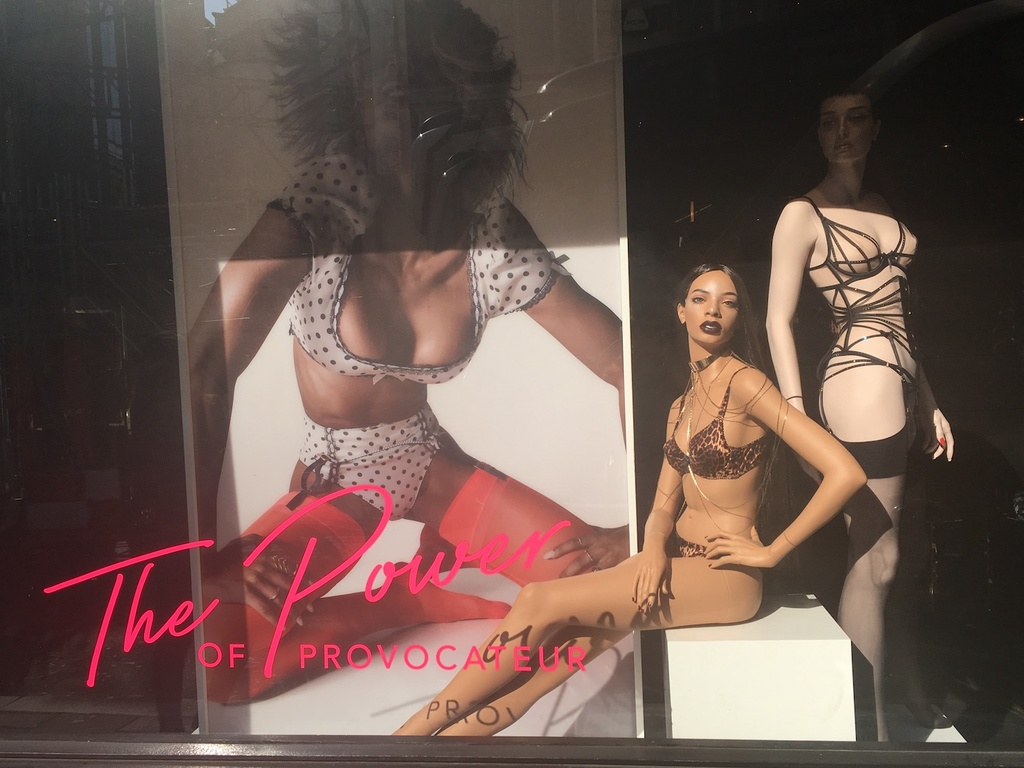 Recent studies have suggested what many have long suspected – that our brains are practically hardwired for religion, and religious behaviour. We can’t help erecting idols, ideological or physical, to ideas which bewitch us. Capitalism, honoured devotedly in Mayfair. Beauty, worshipped in our twin obsessions a) women and b) art (objects, amiright?). The former only stokes the fires of the latter – money pours in as female consumers react to their objectification with desperate measures undertaken to emulate The Woman: the definite article rather than the indefinite. What would She wear? What would She buy? Likewise, our fixation with the original – and a pretty direct hangover from religion – sees works of art treated like relics, galleries like sacred spaces. We’re squeamish about art as a category of thing-ness and, although destroying pieces of it seems to be the theme of the week, there remains something radical about its dismemberment – especially at such a glacial pace, in which Dasha’s disintergration can span an entire exhibition slot; in which her disintergration is the exhibition.

So, look; remember the conversation at this piece’s opening about strutting around in delicious disregard of what’s expected of you. Dasha might be at home in W1, but that’s precisely why it’s such fun to see her effigy melt on one of its side streets. The perfect storm of art/(female) beauty/capitalism emerges as a holy trinity for here and now, and Fischer’s daring you to watch that world burn. Hoisted on its own petard, Mayfair watches itself incarnate and collapsing in the window of 17-19 Davies Street. It would be improper to intercede. 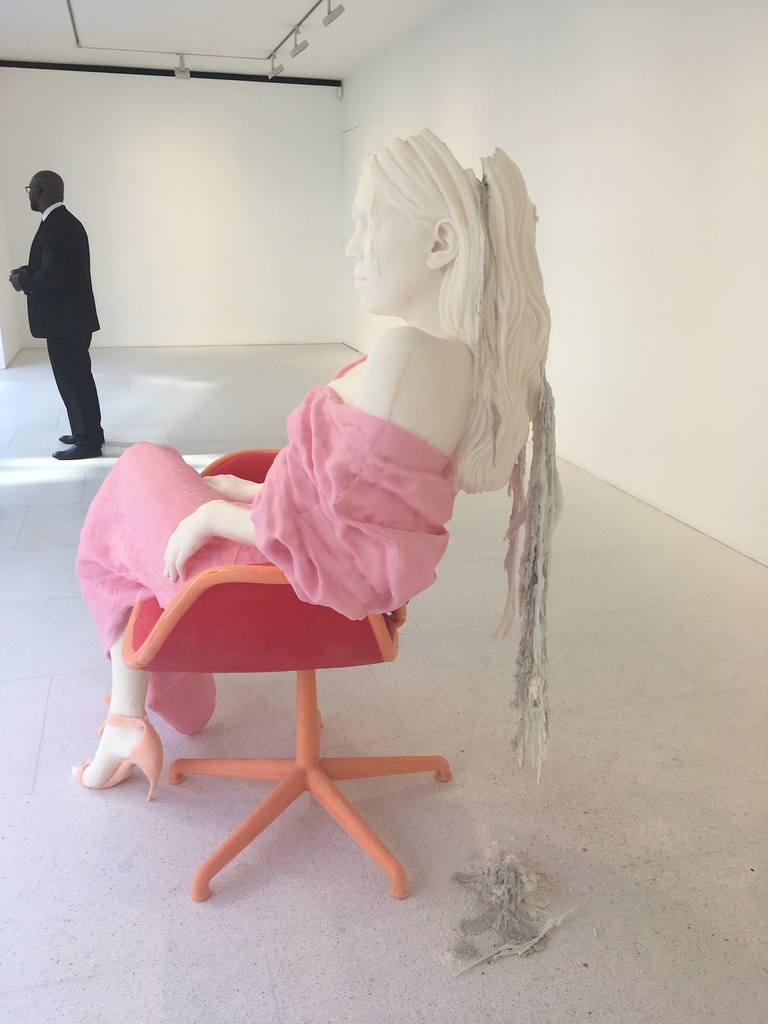