Kyle Weeks is a young Namibian photographer whose work challenges perceptions about African identity by capturing a burgeoning youth culture that is stylish, creative, and optimistic. His photographs have appeared in Dazed and Confused, i-D, and Time, and his wide-ranging work includes shoots in the Congo with Belgian-born musicians Petite Noir and Baloji, numerous fashion shoots, including one for Vogue and another in Accra, Ghana with stylist Ibrahim Kamara, and two series on the Himba people of Northern Namibia. The first won him a Magnum Photography Award. We caught up with Kyle to discuss the second, OvaHimba Youth Self-Portraits, included in Face to Face. 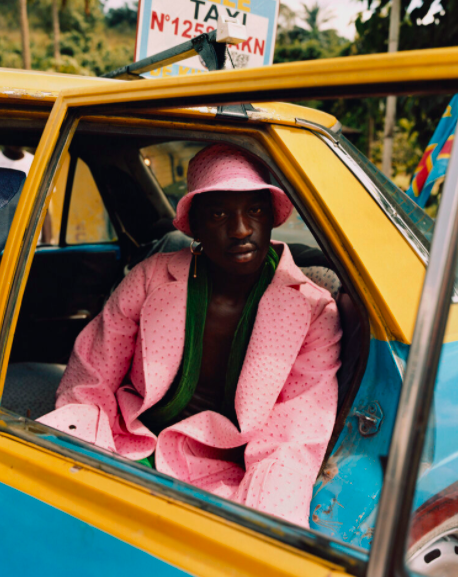 Halfway through my interview with the photographer Kyle Weeks, he pauses to dig through his notes and find something he wants to read to me. It’s a quote from the American curator Thelma Golden: ‘There is no question that representation is central to power. The real struggle is over the power to control images.’ The words would make a fitting epigraph to Weeks’ OvaHimba Youth Self-Portraits, a series of photographs that explore the power dynamics of representation and the legacy of ethnographic photography in Africa.

“The real struggle is over the power to control images” 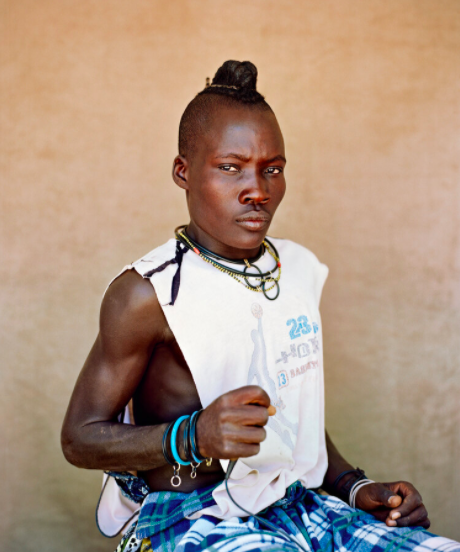 Although Weeks’ work is critical of photography’s historical use as a means of subjection and misrepresentation, it is cheerful about the possibilities of the medium today, as well as about life on the African continent. Characterised by bold poses and bright colours, Weeks’ portraits celebrate the vibrant youth cultures of Africa. Born and raised in Namibia, Weeks now lives in the Netherlands. In normal times, he travels to his home continent frequently to take photographs – his current project documents the youth culture of Ghana – but travel restrictions due to the coronavirus mean that he has been locked down in Amsterdam. We spoke over Zoom and I asked Weeks to explain the ideas and the process behind the OvaHimba Youth Self-Portraits. 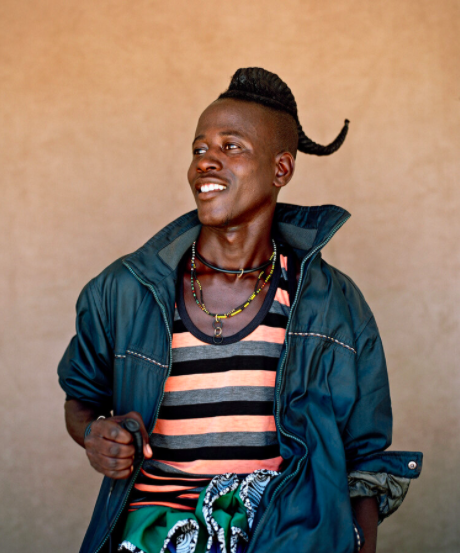 The OvaHimba are semi-nomadic pastoralists who live in the Kunene region of Northern Namibia, around seven hours drive from the country’s capital Windhoek, where Weeks grew up. They herd cattle and observe centuries-old tribal customs. As a result, Weeks explains, ‘the Namibian government praises this culture as an unchanging, last bastion of traditional Namibia. But it’s superficial praise to generate tourism.’ The Himba people’s usefulness in generating revenue has not dissuaded the Namibian government to ditch its plans for a hydroelectric power plant on the Kunene River, plans which include a dam that would flood land of great ancestral importance to the Himba people. 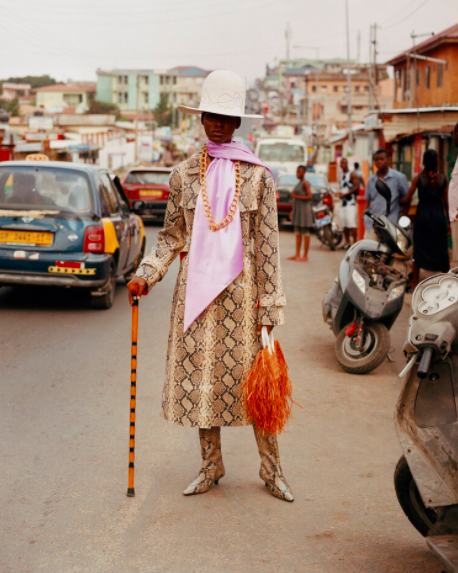 Google ‘OvaHimba’ and you will find copious photographs, taken by tourists, of bare-breasted women and children covered in red ochre, a mixture of animal fat and clay, and engaged in traditional customs: cooking over open fires or dancing. But missing from these images, Weeks observed, were photographs of the men, specifically the younger men. In Himba culture, he says, men most clearly embody a shift towards modernity. ‘The people who travel from half way across the world don’t want to photograph them because of this. These people are out there searching for visual markers of difference to themselves and their own culture.’ Weeks links this phenomenon to a long history of ethnographic photography in Africa, where White photographers travelled to Africa to ‘study’ native people. ‘Those images served as a visual reaffirmation of difference,’ he says, ‘and that trajectory is continuing to this day.’

“I wanted to put the power back in their hands and allow them to represent themselves as they wanted to be seen by the outside world.” 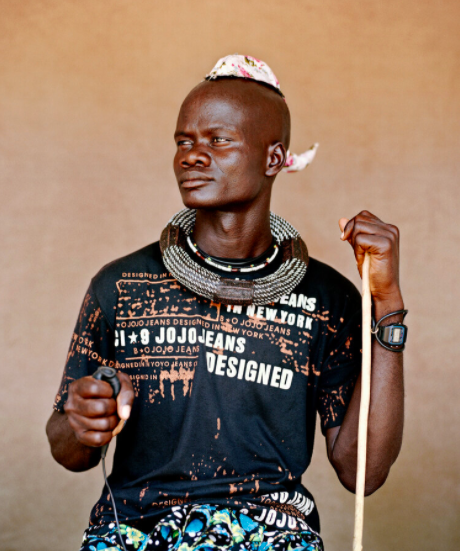 Weeks studied photography in South Africa, where he saw a clear lineage of photojournalism dating back to apartheid. ‘There’s an aesthetic,’ he says: ‘black and white photographs by predominantly White, male image-makers, who go out into groups of people far removed from their own and document difficult living conditions, socio-political issues, and other aspects of these peripheral communities.’ He says he found himself veering in that direction until he delved deeper into the history of representation in Africa and the ethics of photojournalism. ‘You need to look at what you’re doing,’ he thought, ‘are you contributing to any positive narrative? Or are you just telling the same story over and over through a different set of eyes? 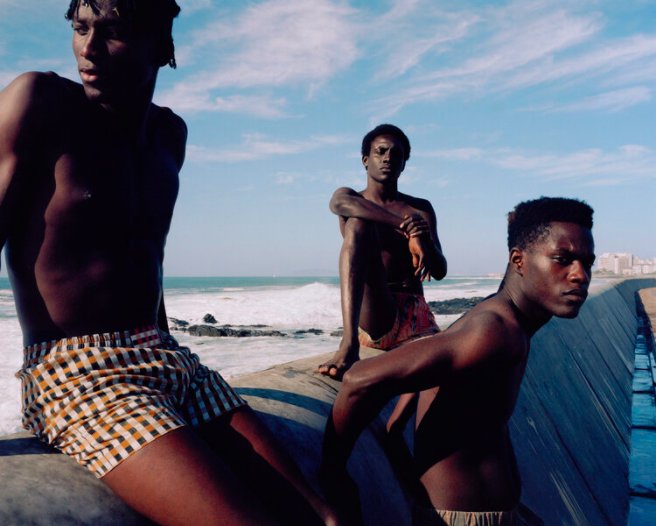 ‘None of the images I had seen of the OvaHimba,’ Weeks says, and in this, he includes his own initial photographs, ‘contributed to any sense of their contemporary cultural identity. These images are pinning the OvaHimba down into perpetual tradition. None of these images is contributing to a representation of them as modern human beings like you and I.’ 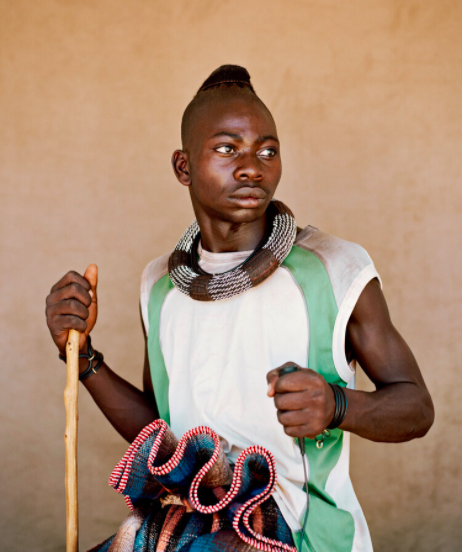 So he returned to Northern Namibia to begin making a series of ‘self-portraits’ that aimed to redistribute the power of representation. ‘The relationship between the photographer and the subject became of paramount importance,’ Weeks says. ‘That’s where the idea of a self-portrait project was born for me. Quite simply, I wanted to put the power back in their hands and allow them to represent themselves as they wanted to be seen by the outside world.’ He would aim to exert as little influence over the resulting images as possible. 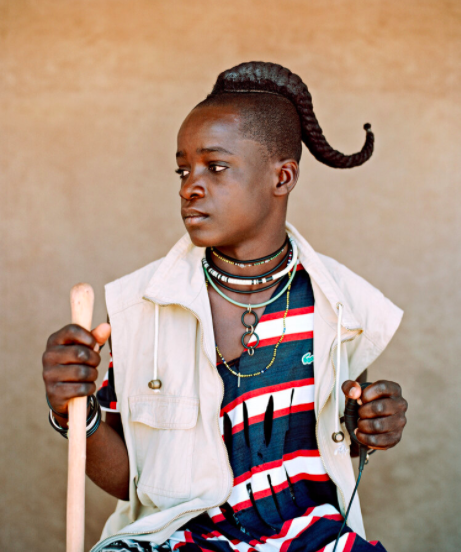 “a photograph always excludes as much as it captures.”

Weeks, travelling with an interpreter, sought out young men roughly his age and asked them to participate in a photoshoot. Most photographs of the Himba are taken without consent or preparation, but Weeks gave them a day of preparation so that they could appear as they wished to be seen. He set up a makeshift studio to decontextualise the images, to shift the focus away from an affirmation of difference and towards finding common humanity. 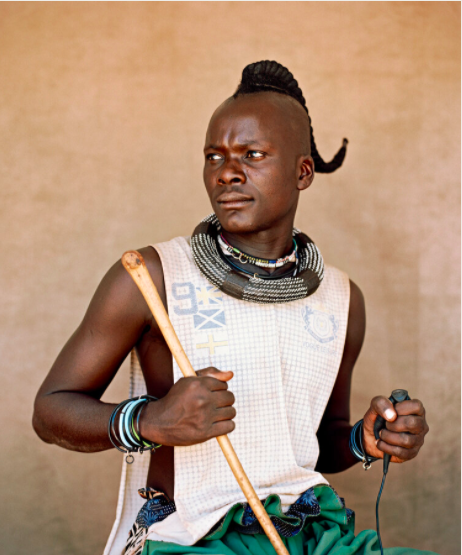 Most importantly, the Himba men were given control of the shutter release and were allowed to ‘self-style’ themselves. The presence of the release cable in the sitters’ hands in the resulting images is a powerful reminder that in photography, a complex and historically conditioned power dynamic is always at play. Weeks’ photographs do not do away with this dynamic – he is aware of his complex position as a White African, of European descent, both insider and outsider – but they do remind us never to forget that a photograph always excludes as much as it captures. 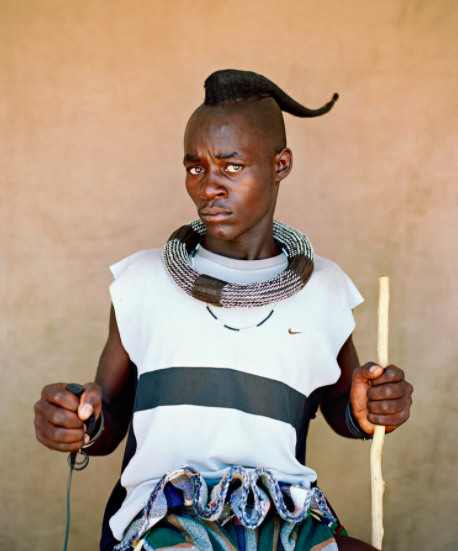 The photographs present a picture of the OvaHimba men as proud of who they are, both traditional and modern. They carry machetes and staffs; they wear headphones and football jerseys. 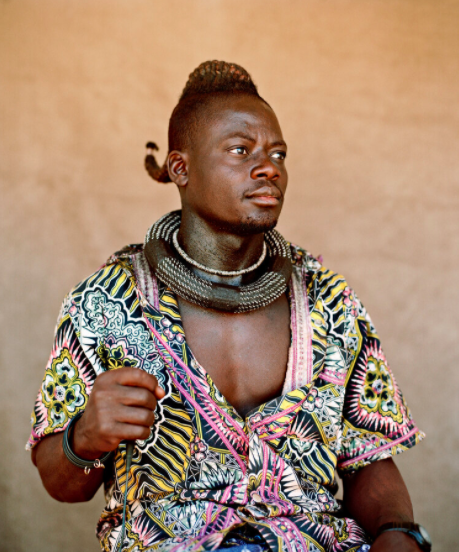 Is his work a kind of activism, then? I ask. ‘I’m not quick to label my practise as activism per se,’ he says. ‘But these are strong beliefs of mine. This is the Africa I grew up in and when I saw how different the reality and its representations are, I felt I had to take it upon myself to push a different narrative. In my work, I’m trying to create counter-narratives and to highlight the individuality, the creativity, and the positivity within the African continent.’ Indeed, Weeks’ stirring photographs of young OvaHimba men point the way towards a new, consensual and collaborative method of portraiture, one that tells the story of photography’s colonial history and of Africa’s bright future.

Find out how The Fund For Global Human Rights equips indigenous and rural communities with critical resources to defend their land and natural resources against exploitation here.

Kyle Weeks has kindly made a limited edition print available. Proceeds from sales of the work will directly support the work of the Fund, helping to equip locally-rooted activists and organisations with the right resources to affect change in their communities around the world.