Be Your Own Icon

You’re born naked, and the rest is drag. So says RuPaul Andre Charles, repackaging Judith Butler’s Gender Trouble into fewer characters than a tweet. Having graced our screens for more than ten years now, his magnum opus (and the best television in the history of the world?), RuPaul’s Drag Race, is back for an 11th season on Netflix. Devotees, rejoice; new comers, buckle up.

Drag Race has its own rhythms, way of speaking, value system and hierarchy, each drawn from a moment in queer culture. 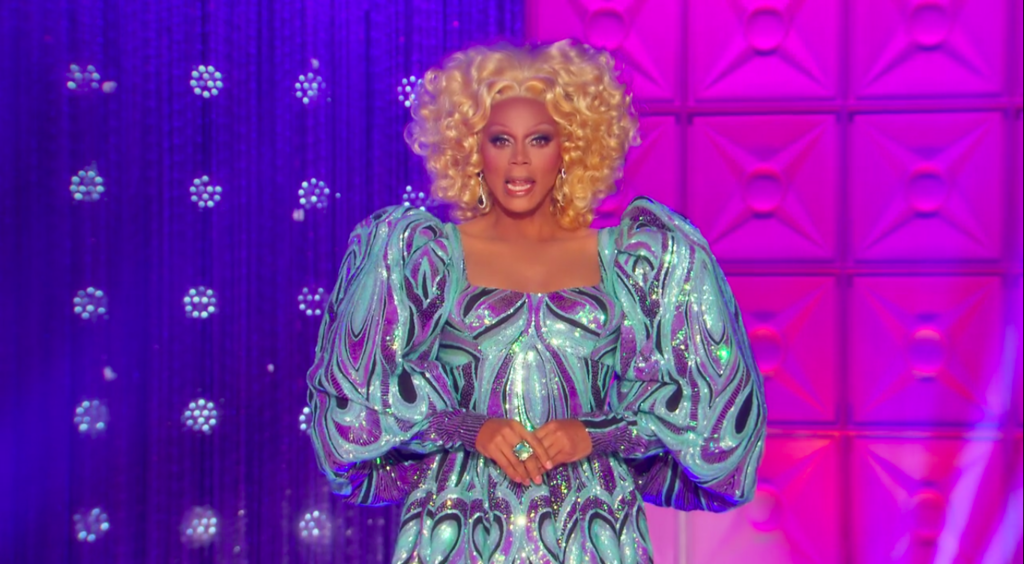 Drag Race sees a hand-selected cohort of drag performers battle to be crowned the season’s top queen. The group is whittled down one by one, divided into Tops and Bottoms (ha!) each week according to their success in challenges which range from performance to runway, singing and dancing to comedy and makeovers. The criteria for success are more nuanced and profound than can be neatly expressed in a paragraph here, but they’re also what make the show so unbearably interesting. RuPaul himself (herself, judging in full regalia) apportions wins and losses according to four qualities displayed to lesser or greater degrees by the participants. You might notice an acronym in the categories of Charisma, Uniqueness, Nerve and Talent, one of many in-jokes compounded by gleeful repetition in episode after episode, season after season. Drag Race has its own rhythms, way of speaking, value system and hierarchy, each drawn from a moment in queer culture and now – having acquired critical mass – influencing wider society in turn. 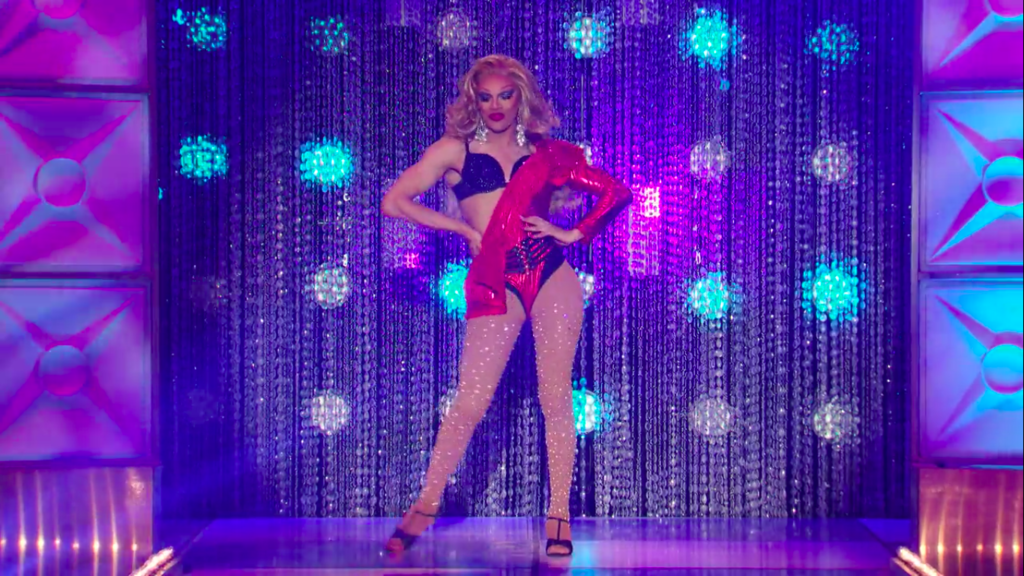 Way back when, with season 1 in the distant past of 2009, the show was riffing very directly on the format of America’s Next Top Model. While its origin show has faded from our collective consciousness, embryonic Drag Race cast Ru as a kind of queer (and much more compelling) Tyra Banks; her girls, featured like Banks’ contestants in the work room and in challenges, had plenty of time to rip each other to shreds or sabotage ‘looks’ in the making between competing for the judges’ approval. Likewise, and more so in Drag Race than ANTM, the girls opened up on camera about their lives; they offered practical and emotional support to one another; they spoke candidly about their experiences in contemporary America. In its infancy, Drag Race was playing with a format with which its audience was familiar; since then, its anarchic parody has reached such dizzying heights that episodes airing now are almost completely self-referential.

Drag is the friendliest of parodies, a tribute to and cartoon of femininity which lives and dies with references to stand against. 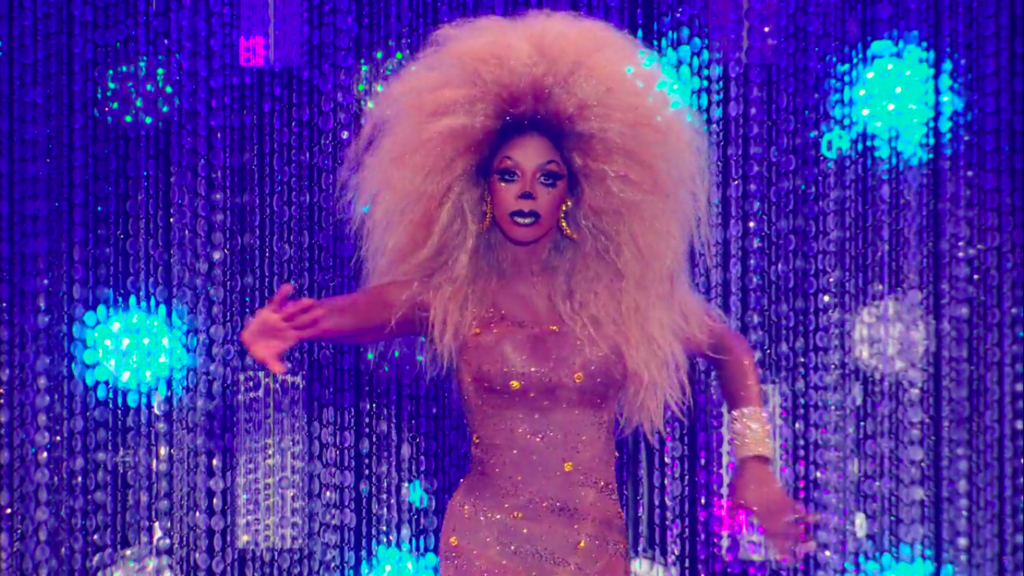 Drag Race is made out of the weave and weft of drag culture as it intersects with mainstream America – gay icons in Britney, Cher and Mae West collide head on with much more community-specific references now available to a whole generation of kids, queer or otherwise. It’s because of RuPaul, for instance, that I know about Paris Is Burning and its inimitable (much imitated) traditions of vogueing, reading, houses and balls; I know about Little Edie of Grey Gardens; I know more than I did about the othering experienced by gay men in the US today, and I’ve learnt about how to keep a wig in place while performing a series of backflips. I’ve learnt that, whilst a particular drag performance is likely to involve impersonating a specific character – even one invented for its own sake – that drag itself can be a kind of extended homage. Drag is the friendliest of parodies, a tribute to and cartoon of femininity which lives and dies with references to stand against. Good drag, I think, brings the arbitrary nature of gender nonsense to the fore by committing its tropes to caricature. It shows you what you knew so deeply that you didn’t know you knew it; hinging on the hyper-familiar and its subversion, radical wrangling seems to me one of drag’s founding principles. Find common ground, and move from there. 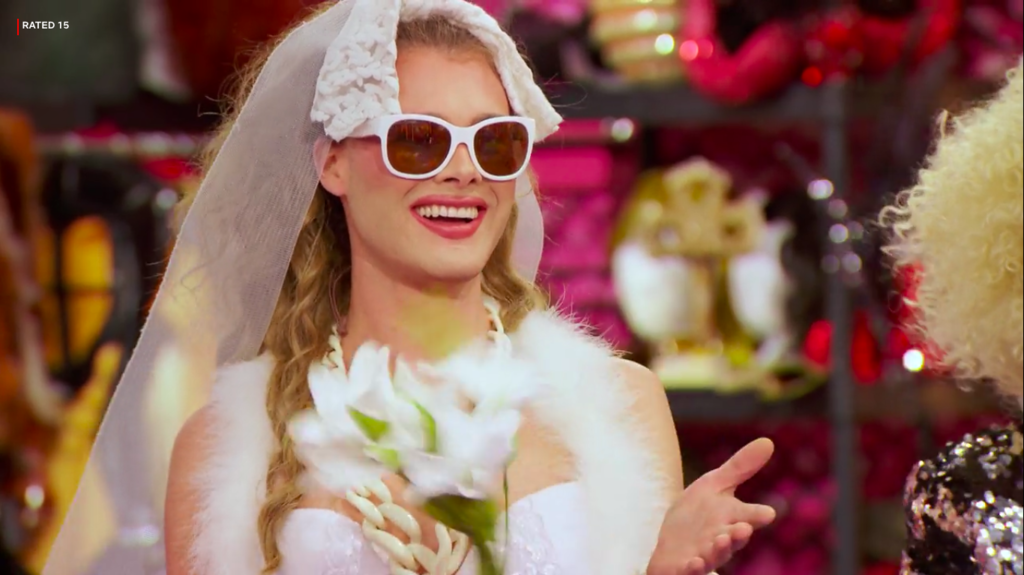 Snatch Game (the only challenge repeated faithfully each season) sees the girls impersonate celebrities on a faux game show panel, and the politics of their choices – zeitgeisty, inappropriate or divinely inspired – provide as much entertainment as the event itself. Imitation might be the sincerest form of flattery, and plenty of queens have forged careers on the strength of their tribute acts; mirroring, though, encompasses the performer’s daring an audience to point to its differences from the ‘original’ as much as its similarities. Chad Michael’s Cher, or Courtney Act’s Britney, take pop icons as springboards and run with them, delivering performances far exceeding the sum of their parts. Even (especially) the show’s regular climax – Lip Sync For Your Life, which sees an episode’s weakest competitors battle with a performing drag queen’s bread and butter as their weapon – takes as its starting point the work of another artist, performed with love. While there’s plenty of surface rivalry, RuPaul’s Drag Race (and drag more widely) relies on a kind of solo collaboration; maybe Judy Garland sang it first, but Ben De La Crème made it something new and old at once.

Its vocabulary (what’s the tea, throwing shade, face beating, etc etc), appropriated by the show in solidarity from the basement halls of Brooklyn clubs, has landed in the mouths of people across the world. 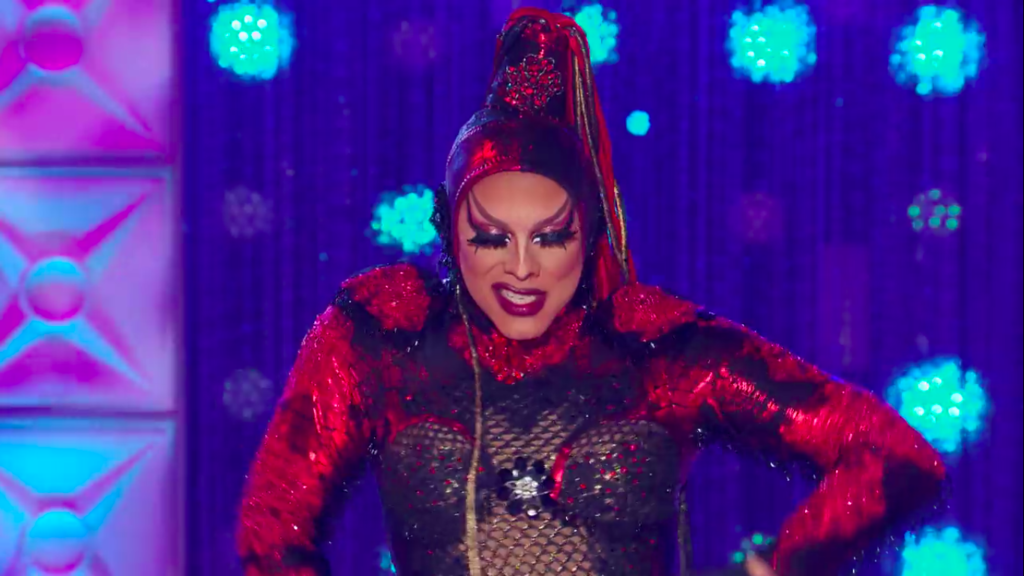 Something beautiful has happened, now. Suddenly, Drag Race – once an impossibly niche concept show for a tiny, exiled minority of American society – has gone mainstream. Its vocabulary (what’s the tea, throwing shade, face beating, etc etc), appropriated by the show in solidarity from the basement halls of Brooklyn clubs, has landed in the mouths of people across the world. Amazingly, if unfairly, many of its users won’t know where it originated. Likewise, the recent frenzy of contouring and Instagram make up – frequently attributed to Kim Kardashian et al – comes from drag culture. It’s stage make up filtered through female impersonation, developed to whittle jaws thinner, noses finer; brows, higher. I’m sure, though, that it wouldn’t cross the mind of teen influencers, walking their followers through the #perfectcontour, to whom they owe their craft. On the one hand, this drift of drag culture from its roots is a classic example of the travesty imposed upon minority cultures as they are subsumed by the dominant monolith. On the other, it’s a gleeful and glorious testament to RuPaul’s phenomenal drive and vision, and the impact of his empire on the world. Finally – and who could have foreseen it? – Drag Race is big enough to influence itself. 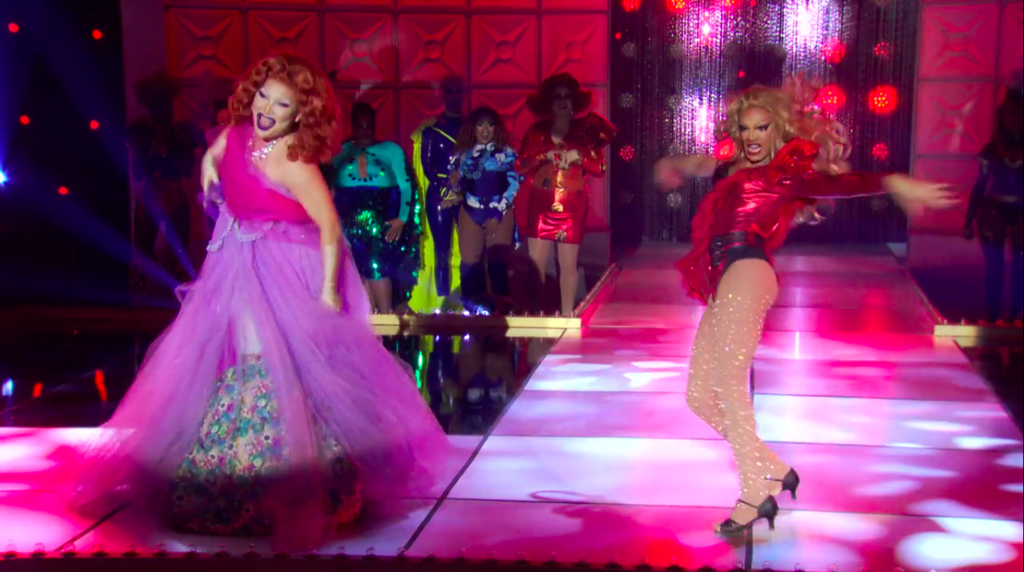 This season’s first episode saw the new queens ‘inherit’ wardrobes from stars past and do homage to them on the show’s final runway. While the tradition of Drag Mothers and Daughters – where an established performer mentors a young ingenue as they take to the stage themselves – is nothing new, this latest cast is overwhelmingly populated by tutees of former contestants. Others are stars in their own right, Youtubers or Instagrammers bringing drag culture to a new generation and much wider audience than could have been imagined ten years ago. Apart from anything else, it proves the reach of Ru’s project; drag is a career prospect steady enough to keep an old queen in business and protegees. It’s sufficiently interesting to the world at large for personalities to succeed in the ruthless business of online celebrity. The show itself is, on the one hand, almost unrecognisable from its first incarnation; on the other, it’s been astonishingly steadfast in its founding convictions. Still, it hinges on the ineffable desirability of good character (C.U.N.T, remember?), courage and star quality. Still, it leans in to rather than away from the work of other artists, towards solidarity and collaboration rather than catty infighting (though there’s plenty of that too). Drag Race has always understood the inestimable power of an icon to get a bullied child, or an outsider, through tough times; now, though, it’s making its own.