How was your day? What are you up to at the moment? How are you feeling? A million and one questions like these pepper our everyday discourse. They prompt the creation of little narratives, episodes of a life anchored in time and reeled off chronologically: beginning, middle. End. But what’s a story with no one to hear it? What happens when one part of your history eclipses the whole?

This rejection of linearity puts the actors in control – their stories will unfold when they decide to disclose them. 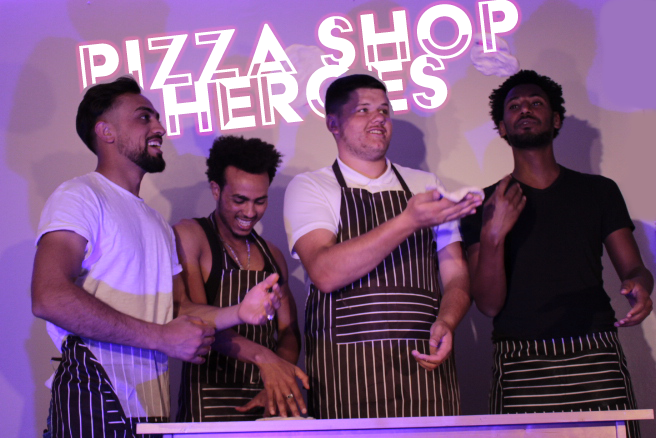 Phosphoros Theatre is fighting back. For actors Tewodros, Syed, Emirjon and Goitom, their very existences depended on such a story: that of where they came from, and why they left it. Leaving behind Eritrea, Afghanistan and Albania, travelling to the UK – these sole threads in the tapestry of four entire lives eclipse the whole. They have been repeated like mantras to the Home Office; to social workers; to volunteers in refugee camps, all in the hope that one of these parties would listen. In doing so, identity – constructed from building blocks of family life, childhood, history in a particular place – dissolves. Who are you, without those markers?

Identity, direction, purpose all emanate from the performers, standing on stage behind the wooden counter of a pizza shop. These were four boys who arrived separately in the UK, unaccompanied asylum-seeking children. Now, they’re here to make sure the stories they tried so hard to communicate on that journey are heard at last. In 45 minutes, we are taken through a pastiche of their four lives; past, present and future journeys are stitched together by comedy and human warmth before our eyes. In the play’s most comedic moments – and there are many – laughter’s invisible bonds bring the audience closer to the charismatic men on stage and to an understanding of their experiences.

At times, we see ourselves at a remove: parcelled through a newcomer’s gaze. Stereotypes of UK life are written on pizza boxes to be wittily unpacked – “don’t give up your seat for people on public transport, they will think you are rude” – and the tables turn. Who’s the alien? Well, who’s asking? Shouting as loudly as a protester’s placard, the four presences on stage feel subversive – revolutionary, even – as the play’s temporality flicks back and forth. Early life (innocence), journey of horrors (shattered), into the UK pizza shop (life, now), conversations about children yet to arrive (life, soon?). This rejection of linearity puts the actors in control – their stories will unfold when they decide to disclose them.

The Refugee Crisis did not begin in 2015, or end in October 2016 when the Calais Jungle Camp was demolished. 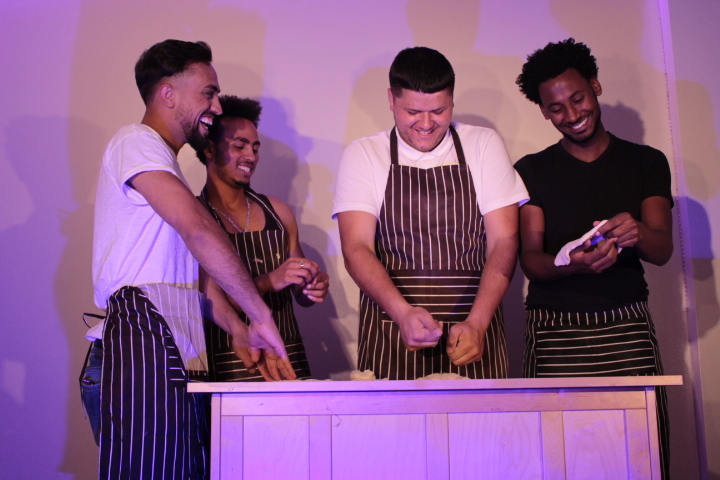 The play’s setting in a pizza shop is sharply chosen. The boys flick flour, answer phones – but they are breadwinners, making dough. Some send the money back to their families. Pizza offers plenty of opportunities to draw equivalences – after all, the Italian staple is a variation on a theme. East Africa has injera bread, Albania has burek, Afghanistan cooks fluffy naan inside a tandoor oven. Cultural differences are valorised as they are placed on an equal footing with their European equivalents. Eid or Christmas? Dari or English? What’s the difference? As Teddy puts it: “I am half Ethiopian, half Eritrean and now, half English.” Nationalities co-exist inside the pizza shop. The cast, integrated and empowered, own this space – a clear rebuttal of the law that refuses asylum seekers the right to work in the UK, and a compelling one.

The play is as historically comprehensive as it is socially detailed. With a few well-placed pizza boxes, Teddy and Syed become Ethiopian Emperor Haile Selassie and the Italian colonial forces. It’s a tongue-in-cheek re-enactment of Italy’s attempt to claim territory overseas, when borders of African nations were drawn by ignorant colonials like so many lines in the sand. The dress-up is funny, but wields a serious message: after all, it’s not enough to look only at the here-and-now of the refugee crisis without considering its origins. Later, a huge vat of olive oil is upended on stage and used as chair and symbol both. Olive oil, the lifeblood of Mediterranean cuisine, is widely used from Syria to Spain, Iraq to Italy. We are reminded that the stories of the four boys on stage represent those of countless others, a history of migration across the Mediterranean spanning more than thirty years. The Refugee Crisis did not begin in 2015, or end in October 2016 when the Calais Jungle Camp was demolished. There are still over 2000 refugees struggling to survive in Calais alone.

Ultimately, though, the success of Pizza Shop Heroes lies in its determination and resolute optimism. The play finishes with paths decided upon – electrical engineer (Syed), actor (Teddy), electrician (Emirjon), musician (Goitom) – and the audience is champing at the bit to see their aspirations realised. If the cast’s astounding personal histories are anything to go by, I have no doubt that they will succeed. The members of Phosphoros Theatre have told their stories at last, to have them absorbed in 3D technicolour and with all the nuance of a human being – not a form to be filled, or an application denied. Pizza Shop Heroes is a declaration of strength, willpower and the whole-hearted embrace of life, engineered by people who have climbed mammoth obstacles to perform it. It’s inspiring, humbling and deeply moving. “I am in charge of my story and people are listening” says Syed. “This is our resistance.” Finally, the curtain has lifted.

Phosphoros Theatre are at The Bunker, 2nd and 3rd December. Book and find out more here.