When five strangers tapered Tom’s moth-eaten ZZ Top beard, bought him a memory foam mattress, and convinced him to stop wearing jorts, I cried. I’m trying to figure out why this was so. On paper, Queer Eye is junk food – a sensationalised, personalised, homogenised, inconsequential, irreverent makeover show, capitalising on stereotypes of queerness. So why do I love it so much? Why have at least half the episodes made me cry? Queer Eye clearly isn’t junk food, or mere Human Interest programming – so how to explain it?

He sees his third ex-wife Abby every now and then; they’re still friends. He says he’s unlucky in love because he’s butt-ugly. 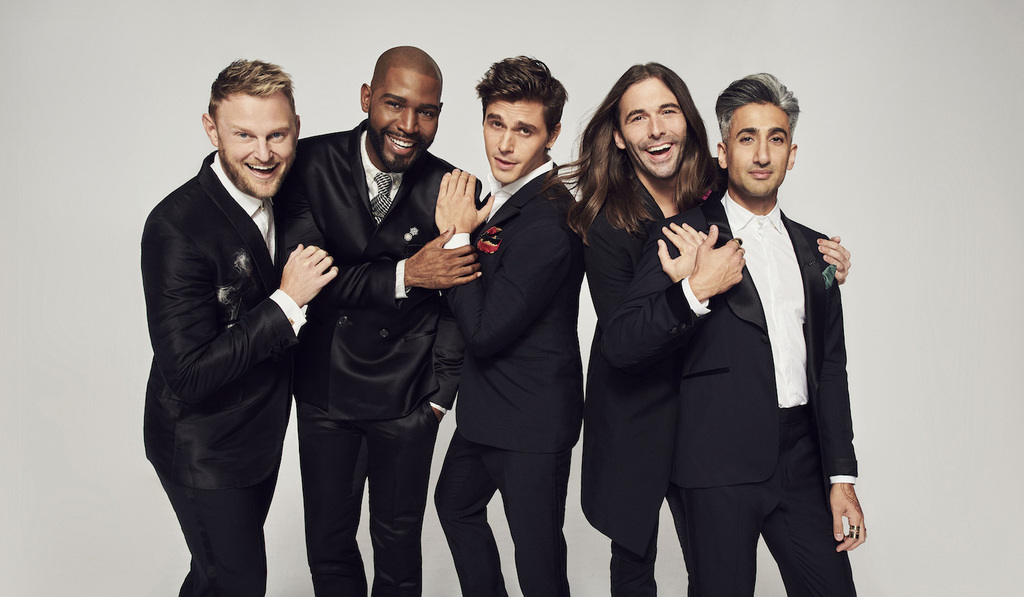 I have to confess straight away that I’m finding this hard to write. Because even though I’ve always thought my masculinity quite robust, and have a great support network around me, somewhere – deep down in the chasmic place that evidently shows like Queer Eye are able to reach – there’s a voice: Boys don’t cry. We’re all, men and women, hemmed in by norms and rules that we cobble together from those imposed on us in a desire to fit in. Perhaps, then, what I find so profoundly moving about the Queer Eye formula is in its granting a little wiggle room amidst the layers of constraint. And if that gets me, I can understand how important it must be for a man like Tom; his episode seems the most perfect encapsulation of whatever it is that opens the waterworks behind my eyes.

Our first shot of Dallas, Georgia, features a skunk carrying something dead in its mouth across a backroad. Tom’s in a Tex Mex restaurant ordering a Jumbo Redneck Margarita – as if the waitress has to ask; after all, he’s just a dumb old country boy from Kentucky. A creature of habit. Smoke a cigarette. Watch the television through the open door onto his porch – his favourite thing to do. Tom’s lonely. He sees his third ex-wife Abby every now and then; they’re still friends. He says he’s unlucky in love because he’s butt-ugly. His cap is pulled down, covering his face. The eyes behind his rectangular glasses are baby blue, his cheeks dry and flushed beetroot red from lupus. 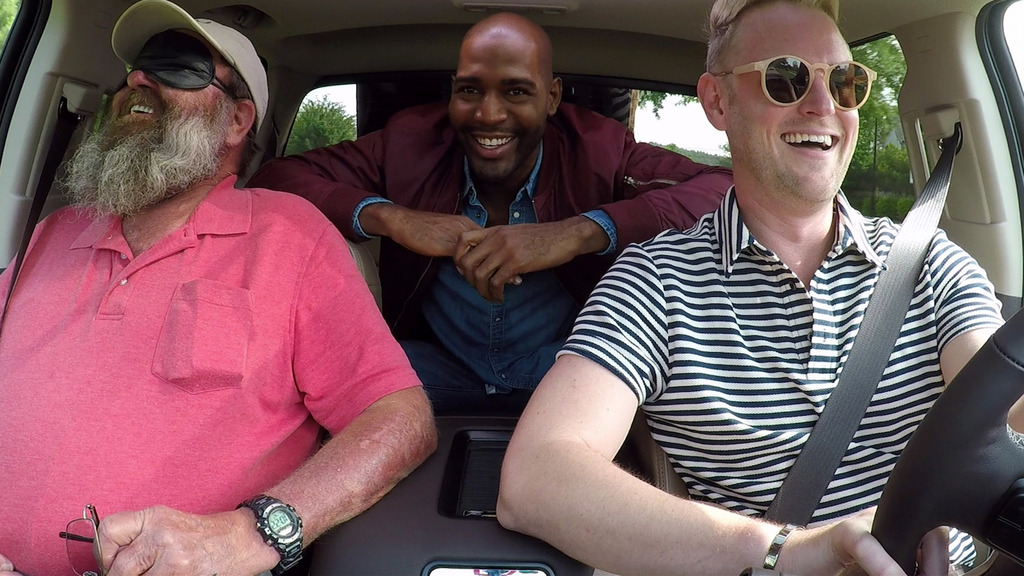 The Fab Five always enter as a fabulous tornado, throwing whatever version of masculinity they’re facing into sharp relief. When they appear this time, for example, Tom’s blowing his nose at one of the regular meetings of the ROMEOs, or Retired Old Men Eating Out (they have breakfast and look at each other’s old cars.) All that’s happening ostensibly are enthusiastic greetings and hugs, but what’s staged is ideological: middle-American ‘Straight’ meets East coast ‘Queer’.

Tom’s basement apartment looks a bit like his beard. The tornado whirls through it. Bobby is chasing Jonathan with kitchen tongs he found in Tom’s bedroom. There are dirty dish rags by the bed. Antoni dares to smell the stains on Tom’s favourite recliner, bought for him by an ex-wife. Tom is huskily chuckling all the while. In the bathroom, Bobby grabs the shower head, ‘Is that a douche?’ ‘It’s a shower head,’ Tom says. Jonathan covers his ears. ‘Don’t scare her. We just got here.’ Tan is dismantling Tom’s wardrobe, strewing clothes onto the floor. He finds a quilt that Jonathan promptly wraps round his head. Tom’s impressed. ‘There you go, brother,’ he says. ‘I mean, sister.’

The show’s beats are so clear, so on the nose that you could accuse it of being emotionally manipulative, and so as a cynical and rational viewer, why does it produce such a strong reaction? To give you an example, Karamo and Bobby blindfold Tom and take him to the dump. They ask him to say goodbye to his Easy Chair, as it’s thrown on the rubbish pile. It’s a metaphor, right? 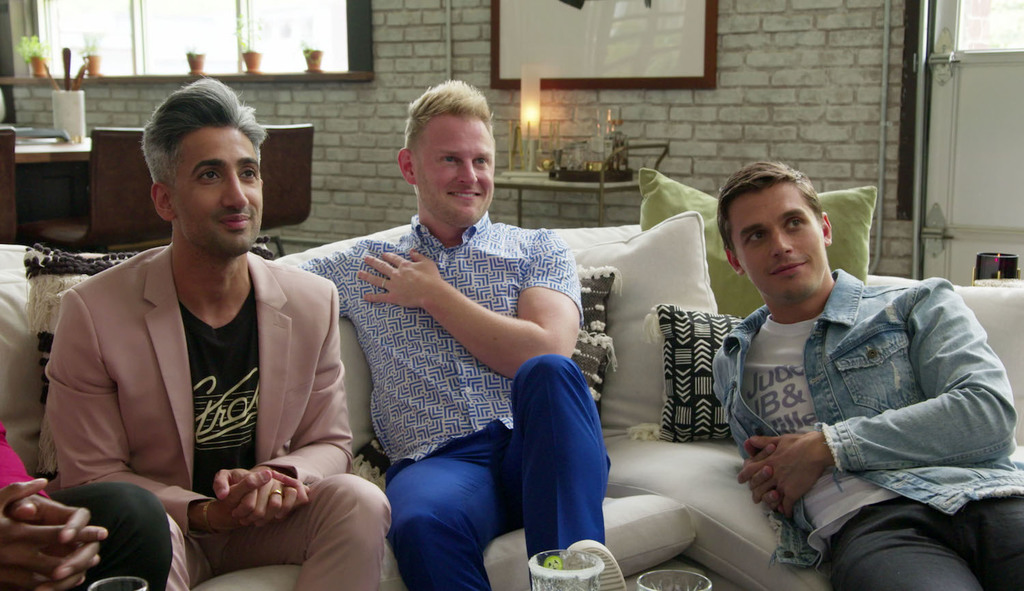 But this strong Reality TV grammar allows for tone shifts. In the car, on the way to buy Tom a new mattress, the subject of marriage comes up. ‘Which one of you is the wife?’ Tom asks. This naïve question is met with gentleness and patience, rather than totally justifiable raised hackles: they actually talk about it! ‘I had that before,’ Jonathan says. ‘It’s like, “Who wears the pants?” I think whatever role you are – whether it’s like moon or sun – moon being more feminine energy, sun being more masculine – I think there’s gorgeous strength to be had in both.’ Tom, you feel, is genuinely taking it all on board. But Jonathan is TV gold – because besides being charismatic and funny, he tempers Big Issues like this with his own authentic brand of irony, bringing a mass audience with him.

In the hairdressers, Jonathan quips, ‘It’s really hard for me to work with all this luxurious Beyoncé hair in my face.’

‘You look so cute,’ Tom says, and you can see him smiling into the mirror, trying it on for size. Has he ever said that to a man before? Has he said that ever?

The part of the show when the chance of a lachrymal event becomes a strong possibility for me is when the full makeover is revealed and it’s time to say goodbye. Tom’s episode has a particularly good pay-off because he’s so grateful and taken aback. ‘Oh my god! Oh damn, I can’t believe.’ And in his Kentucky drawl ‘damn’ has two syllables. There are market lights in his garden, and a seating area to have people over. Inside, there’s a picture of his pride-of-joy 1937 Plymouth hanging. Two brown leather chairs. ‘They’re recliners,’ Bobby says.

Tom’s physical transformation is symptomatic of a deeper one. You see a man with crossed arms come out of his shell, and it touches a nerve – because, if we’re honest, we could all do with some help being more open and receptive to change. That is often the hardest work of all.

‘I’ve had a great time guys,’ Tom says, sitting on the picnic table. 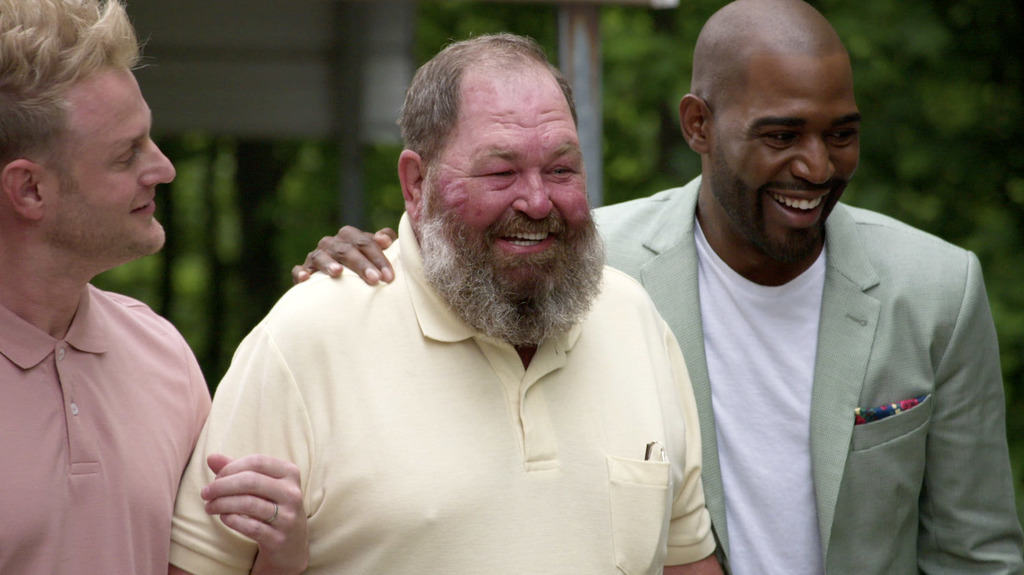 And the kind of crying I do is not bawling, it’s more like tearing up. It’s the kind of crying that makes me think I would like to cry more often, and over more important things. I’m crying for the first time in a long time (at least, since I last watched an episode), watching another person break the seal on a much deeper well.