Fagot Koroviev, Minister for Security of Botrovia, is teaching us to see the truth. Twelve easels encircle a model – Mr Robinson – whose platform sits upon a panopticon motif emblazoned on the gallery floor. And now, as we each take our places before a blank page, it’s down to us to extract Robinson’s essence by translating him into charcoal lines and shading.

He is one of only six who will hear Moore’s message, each singing for their supper by offering their skin for inking.

Mr Robinson is ready. Koroviev explains, as he cranks a lever to bring the Tactic δ:ASPM1b Enlightenment Hood down upon Robinson’s head, that this is not a question of scene setting – Mr Robinson will have the honour of receiving a personal communiqué from Botrovia’s charismatic leader, A L Moore, while we undertake our drawing exercises. He has earnt this privilege by showing his commitment to the regime: Mr Robinson had a panopticon insignia tattooed onto his leg by Fagot himself only this afternoon, cementing his devotion to its message and marking him ready to hear from its mastermind. He is one of only six who will hear Moore’s message, each singing for their supper by offering their skin for inking.

Ear buds are fixed in. The hood goes down. Zips up. Meanwhile, the Botrovian Revolutionary Guard keeps watch. Gatekeepers and ritual makers, they sweep around the room, in and out of closed doors behind which we cannot know their movements. Intermittently, one of their number approaches a student of Koroviev with a jug and a tumbler. They’re administering truth serum (vodka, customary in Botrovia) by a selection process whose logic hovers just beyond our grasp. Each dose is offered without hesitation, and leant significance and validity by the same. We’re only students, after all – we don’t understand what happens in Botrovia, but we’re eager to learn.

It does put Fagot’s students on the backfoot, and the power dynamic is unmistakable. That’s essential. Koroviev circles our circle, correcting work with orange chalk and passionate advice as he goes. Our first task is to unlock a capacity we’re assured is lying ready – to see Mr Robinson as he truly is, rather than how he appears. Koroviev orates a story about A L Moore and a man with huge hands who plucked something from his body which shouldn’t have been there – a model for our exercise in extraction. Charcoal to paper: ‘Faster, faster! This should hurt.’ Faster, faster. This does hurt. Our model is still as stone – entranced, presumably, by revelations occurring between him and A L Moore in the universe of his hood. After four minutes, the trauma of truth relents and it’s time to represent objects in relation to each other. Exercise 2.

As the penultimate task unfolds, the third lens on our devout model and his hood, I’m subjected to my 4th dose of truth serum.

Having concentrated so intensely on Robinson’s essence, it’s a relief to zoom out and consider his environment. There’s a lamp; two bricks connected with cement between them; patterned throws, and shadows, and a room full of people. Look at people looking. We spend ten minutes representing parts of the whole, variously encouraged and chastised as Koroviev paces and draws over portions of papers. All the while, the Botrovian Revolutionary Guard are moving through the space – still dolling out truth serum, and now marking certain students with coloured tape. Singled out, but for what purpose? Some are taken from the room. For the rest of us, drawing continues until it doesn’t. The pause between second and third exercises sees Koroviev urge us to build on our new understanding of depth vs surface, essence vs reality and object relations vs singularity to represent Mr Robinson as a series of blocks. As the penultimate task unfolds, the third lens on our devout model and his hood, I’m subjected to my 4th dose of truth serum. Koroviev assured us all, at the beginning of the class, that it would help. It does.

Now comes the final test. We are to draw Mr Robinson as he would appear if we were looking at him from the other side of our circle – to combine what we can see with what we can imagine. The former is hard to ignore, and I find visual cues seeping inevitably into the image I’m trying to project – because I need them, and because it’s as hard to adopt new viewpoints literally as it is metaphorically. A line for a shoulder. A block in the foreground rather than behind. That’s as far as I get: bad student. As Koroviev hangs choice drawings from the class on its walls, the soft power of creativity is inverted. This is tangible, like the tattoo on Mr Robinson. He removes the Tactic δ:ASPM1b Enlightenment Hood: hanging from the ceiling on its concertina crank, four tiny screens are visible at the end of its tunnel. I can make myself out, just about – glancing up, I see a camera in each corner of the room. Mr Robinson’s been watching us, while we believed him blind.

Drawing class is over. I ask Robinson what happened in the hood: ‘Ah, he spoke about all kinds of things. About his father, and he sang as well.’ A L Moore sang? ‘Yeah. It was sort of confessional. It was about how pleased he was that I’d committed to the regime.’ On a loop? ‘Oh, no. No, it lasted as long as the class. I could see you all on the little screens while he spoke.’ Can I hear the song? ‘Well, have you got the tattoo?’ No. ‘No.’ There are forms to fill in, more truth serum to aid in completing questionnaires called things like PUBLIC HEALTH BOTROVIA: ENHANCED SURVEILLANCE CONFIDENTIAL FOLLOW UP OF LABORATORY CONFIRMED BORTROVIA PERTISSIS ARTIFEX (BPA) (WHOOPING COUGH ARTISTIQUE), and PROPAGANDA-RELATED INTERRO/SURVEILLANCE. The questions are baffling, exhaustive, riddled with acronyms and initialisms for systems and services I don’t recognise. The Botrovian Revolutionary Guard supervises. 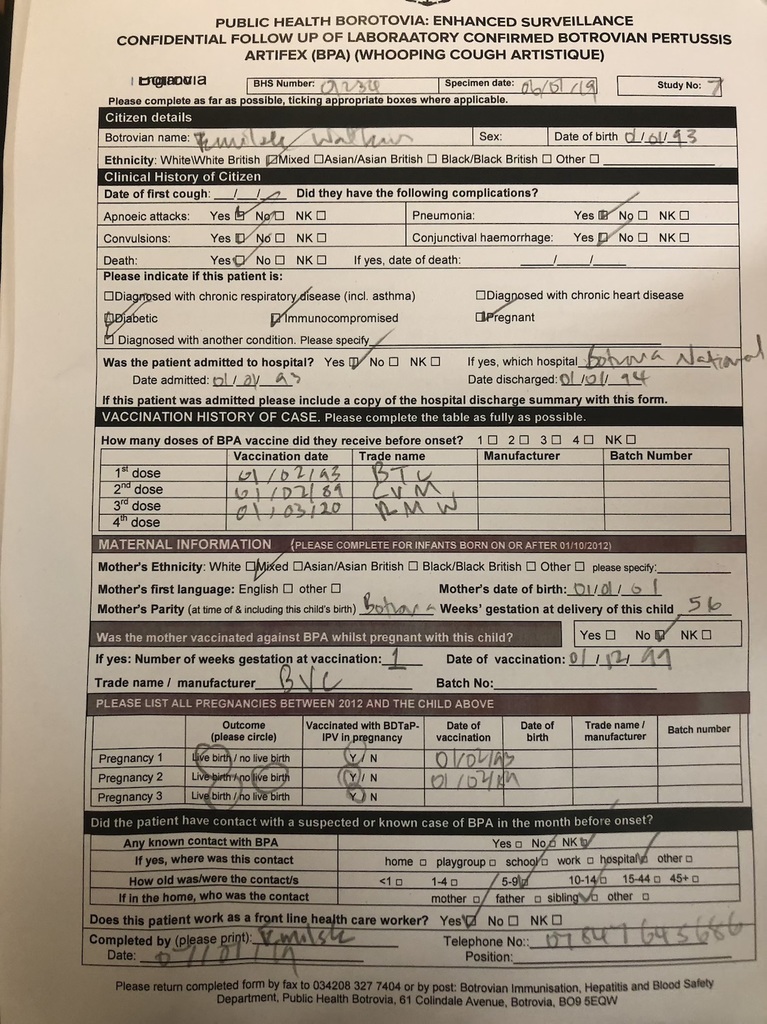 Now I’m part of state records: what is a country but a collection of people and papers? What is a drawing but a metaphor? The Reverse Panopticon offers every signifier of a regime, a belief system, power. It doesn’t matter what’s behind the curtain – here, and more often than we’d care to admit, we’re looking at the curtain itself. Koroviev’s inversions of systems we take for granted (who sees who? What’s an audience, and who should address them?) makes a compelling call to re-examine those beyond gallery walls. On another note, congratulations to Boris Johnson: King of Curtains.

Fagot Koroviev is the alter ego of artist Ric Bower, who developed The Reverse Panopticon with Kelly Schacht and Nastio Mosquito (A L Moore). The Botrovian Revolutionary Guard are played by Cardiff’s Iranian and Afghan refugee and asylum seeker community, whose performances invert the bureaucratic processes to which they are subjected in applying for safe residency in the UK under the Home Office’s infamous ‘hostile environment’ policies. The Reverse Panopticon is at Arcade Campfa, Cardiff, until August 24th.