'Faces to meet the faces that you meet'

A partridge is of course a medium-sized non-migratory bird that builds its nest on the forest floor, as if mindful of a fall from lofty heights. Which is exactly the kind of boring and pedantic morsel of information you’d expect would be close at hand for Alan Partridge, a man who dreams of the lofty heights of fame and admiration, but who, like his namesake, is destined to spend his days navigating a far smaller and more mundane existence close to ground.

The subject of Alan’s show ‘Midmorning Matters’ comes up. ‘Do you know it?’ Alan asks. ‘I’ve watched the odd episode,’ Jenny says, ‘I have to say, I love what I saw.’ Alan: ‘Well, it’s a radio show.’ 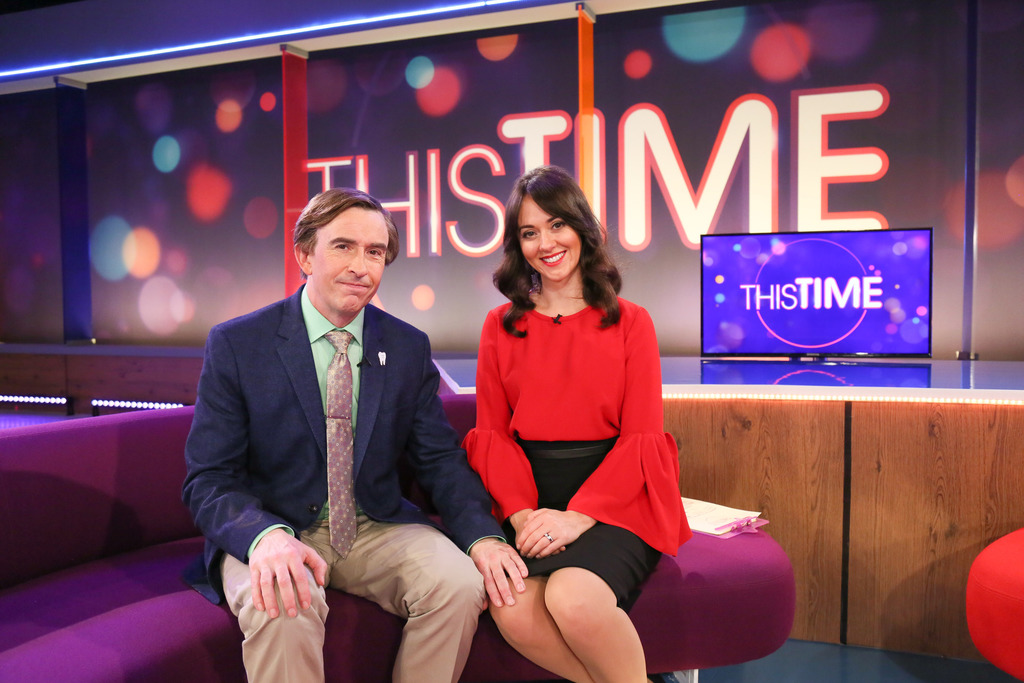 We open out-of-focus on Alan’s mouth as he tries to generate moisture by running his tongue over his teeth. Every bit the manchild asking in that nasal tone ‘Can I have some water, please?’ those returning to Partridge will know that Alan has fought (and lost) internal battles lesser than a dry mouth, whilst newcomers, I feel, need no better introduction to a man expecting star treatment while being ignored — and all with awkwardness as painfully pleasurable as a knife scratching a plate. Come into focus and open out to the purple sofa of This Time, a BBC current affairs program à la The One Show. As the make-up artist applies the finishing touches to co-host Jenny’s cheeks, the subject of Alan’s show ‘Midmorning Matters’ comes up. ‘Do you know it?’ Alan asks. ‘I’ve watched the odd episode,’ Jenny says, ‘I have to say, I love what I saw.’ Alan: ‘Well, it’s a radio show.’

It’s a simple joke, but it captures how, like Jenny and even off-screen, we’re always performing. As T.S. Eliot’s Prufrock notes, you’re constantly preparing ‘faces to meet the faces that you meet’. (Neat then to open with faces being prepared — Jenny’s make-up, and Alan moving his mouth through a series of grotesqueries to assuage its dryness.) The format of ‘This Time with Alan Partridge’ allows for tension to develop between the way he acts live on air vs. how he acts when the cameras aren’t rolling, and surely part of what makes Alan Partridge such a brilliant character is that there’s little to no difference between the two. In his desperate desire for admiration, life has become an endless broadcast, in which postures are stiffly composed and the most trivial of subjects have their soundbytes (‘I don’t like big feet. It reminds me of gammon,’ is an old favourite, but god, there are so many.)

We are drawn into an absurdist world with an unabating and unapologetic logic, and that world happens to be the inside of Alan’s head. Of course leopard seals are an opportunity to talk about U-boats. Alan, one; the world, nil. 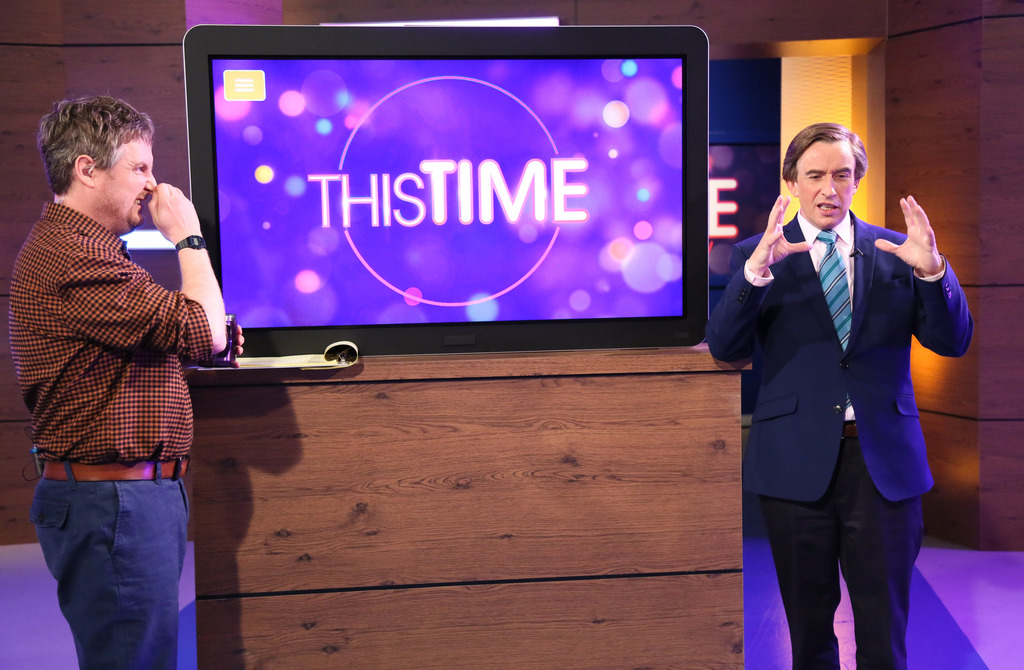 Perhaps because he’s such a parody of himself, he’s also immensely fun to parody. I’ve noticed that when my friends do Partridgeoid impressions, the first thing they do is purse their lips in some way; it’s body language that in a different context would suggest someone holding himself back from saying something he shouldn’t, and I think part of the pleasure of impersonating Partridge is to have that feeling that you ought not to be saying something as the same time you’re saying it. Or if that’s a slight over-extension on my part, at least it goes some way in describing what it feels like to watch the show: it’s the pleasure-horror of someone saying what-they-ought-not-to-say in almost every conceivable circumstance. Even Jenny’s simple introduction after the title sequence informing us that ‘We are in the safe, capable, smooth hands of Mr. Alan Partridge’ is the spark for logorrhoea: ‘Thank you, and very thank you for noticing the hands. I recently changed creams, so good to see they’re getting results, and that they’re not quite so, quite so… cracked.’

There’s such a huge variety of ways in which Alan puts his foot in it, but a family-friendly segment on leopard seal pups showcases a few: feigning intelligence (‘Hydrurga leptonyx, to use the Latin term. Yep, been doing a bit of reading, so’); pedant (‘Top speed of twenty knots — a german U-boat commander would kill for velocity like that, awesome); pernacious to the end ([interrupting] ’Well the allies trained them to deliver mines strapped to their backs to scuttle enemy craft in harbour, boom, successful’). All ultimately stem from an all-consuming inferiority complex (small name; big ego) with points won and lost in ultimately pointless daily power struggles. 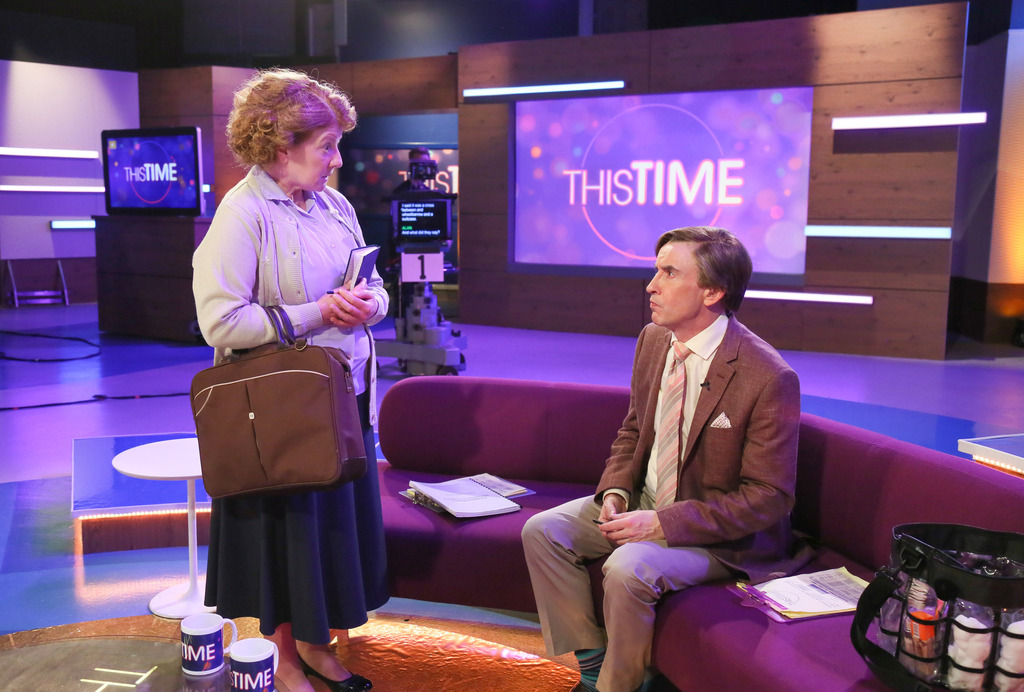 The bit about strapping mines to seals recalls an item from The Day Today — Armando Ianucci and Chris Morris’ mock news program, on which Alan Partridge made his television debut in 1994 — a report that the IRA were releasing explosive-packed terrorist dogs in London. Partridge, a sports correspondent with little knowledge about what he was reporting on, happened to be one of the saner elements on The Day Today, a parallel world in which lines like ‘Headmaster suspended for using big-faced child as satellite dish’ were delivered with deadpan gravity. The Day Today staged an absurdist world that relentlessly barrelled forward on a garden-path visual and verbal grammar. Twenty-five years on, and Alan Partridge is still on our screens, making critical blunders on-air. Although he’s a more naturalised, more complex character than his first incarnation, I believe his lasting appeal has much to do with the spirit of comedy like The Day Today: through nuance and carefully considered idiosyncrasy — the grammar of Alan Partridge, if you will (if the mouth featured heavily at the start of this piece, hands could have generated an equal critique, the overly determined confidence of steepling his fingertips being a key gesture) — we are drawn into an absurdist world with an unabating and unapologetic logic, and that world happens to be the inside of Alan’s head. Of course leopard seals are an opportunity to talk about U-boats. Alan, one; the world, nil. 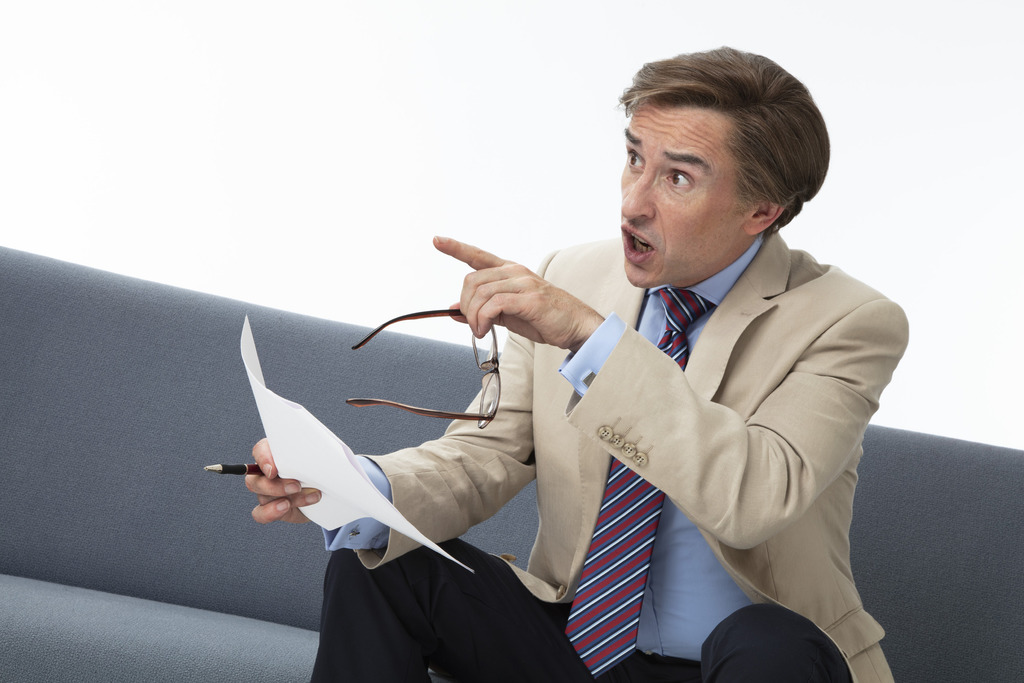 Despite being so old-fashioned, out-of-date, and wide of the mark, Alan Partridge will never go out of fashion. In any case, This Time is a fantastic means by which to bring him into the Twitter-era. Lifestyle shows and day-time-television formats have been often preferred by this strand of British comedy, because in their inanity — see Alan’s segment on washing your hands — they mirror how inane our daily struggles and how meagre our fleeting thoughts can be. Those moments where we would like to correct somebody that it’s Sammi not Simon, but about which, for one reason or another, we bite our tongues. For Alan, that mental landscape added to the world of small-fry broadcasting are his battle grounds, and to his mind (see the Peasant’s Revolt segment in episode two when he’s violently vanquishing hordes of extras) he’s slaying it. So often, the image of ourselves we think we’re performing falls disastrously short of the one the world sees. We might feel like we’re bigger than a large pheasant when we’re actually more approximate in size to a small quail. For most of us living the medium-sized existence, let’s take life’s small victories where we can; Alan Partridge is here to show us how to wash our hands of the ones we can’t.