All at sea with Lubaina Himid

Hear me out — my experience of the Tate’s Lubaina Himid exhibition mirrors the one I had with Bojack Horseman. I came for the anthropomorphic 2D characters. Stayed for the slow-burn horror. The beady-eyed bird woman, who I first saw fluttering on a flag outside the Turbine Hall, appears in Himid’s painting Le Rodeur: The Exchange (2016) resting a tender hand on the shoulder of a distraught man sitting slumped on a bench in front of her. Meanwhile, a woman in a Scandi-chic, rose-coloured coat offers him a scrap of cheque fabric. 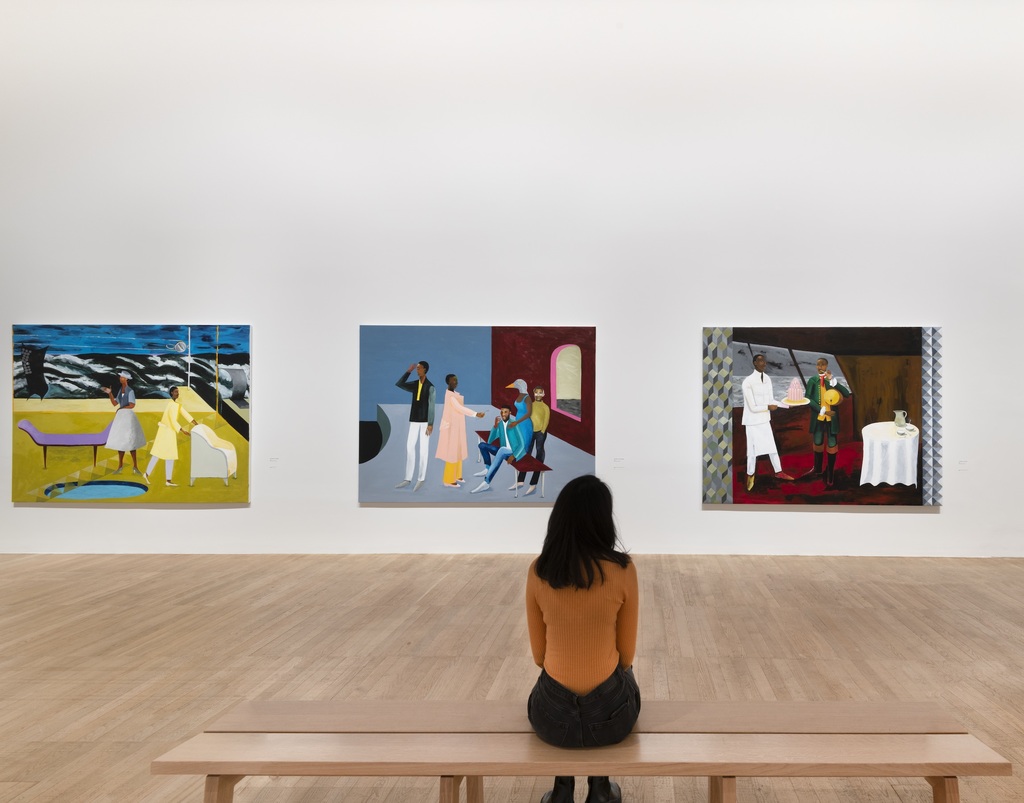 ‘For a long time, the stock answer was that there aren’t any black artists, black people don’t make pictures’, Himid said in Nairne in the late 80s.

How does the scene manage to move beyond the whimsy of these well-dressed women and the three men in their winkle pickers? The distressed man’s hand anxiously raised towards his face. That grey sea glimpsed through the window; that grey-green sea that pounds migrainishly throughout the exhibition. Always in the background. Asking nagging questions of us. 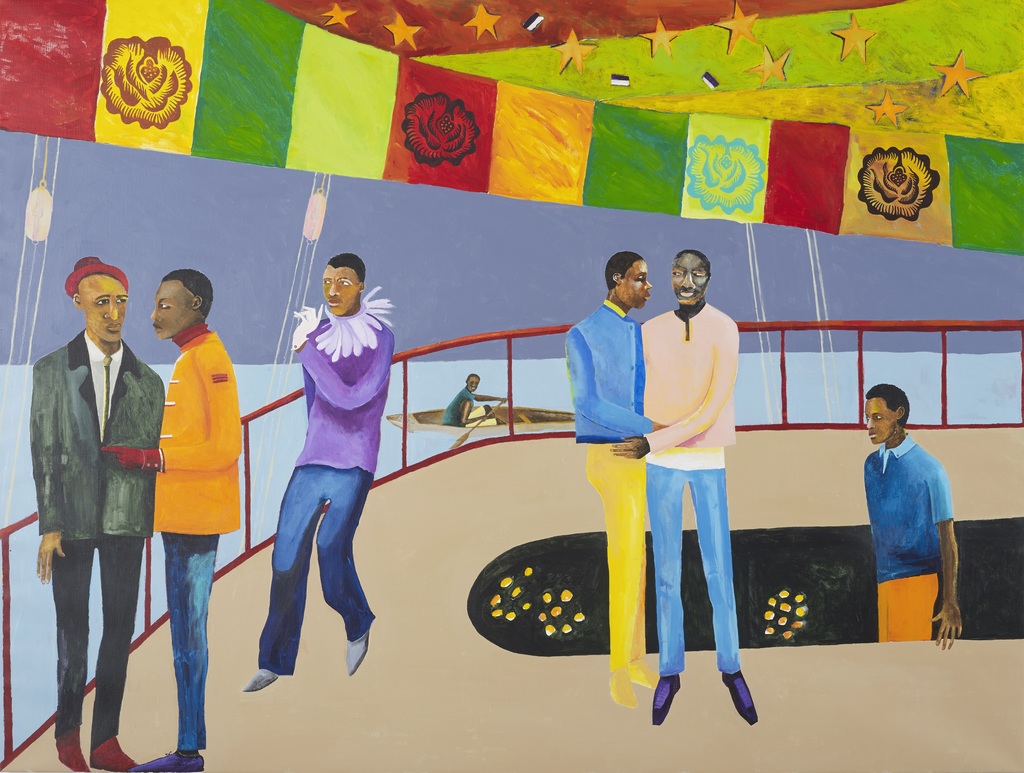 In the early 1980s, Himid was instrumental in bringing a radical generation of young Black and Asian women artists to the British art scene. She curated a string of exhibitions including Five Black Women at the Africa Centre (1983), Black Women Time Now at Battersea Arts Centre (1983-4) and The Thin Black Line at the Institute for Contemporary Arts in (1985), where she was offered a peripheral 20 x 2 metre corridor within which to stage her coup; still, even if not nearly enough, ground had been won. ‘For a long time, the stock answer was that there aren’t any black artists, black people don’t make pictures’, Himid said in Nairne in the late 80s. ‘A lot of us have managed to disprove that, but you know, fancy having got to 1986 and having to prove that you exist’. Fancy getting to 2017, thirty years later, and becoming only the first black woman to win the Turner Prize, a victory that must have seemed ‘bittersweet’. 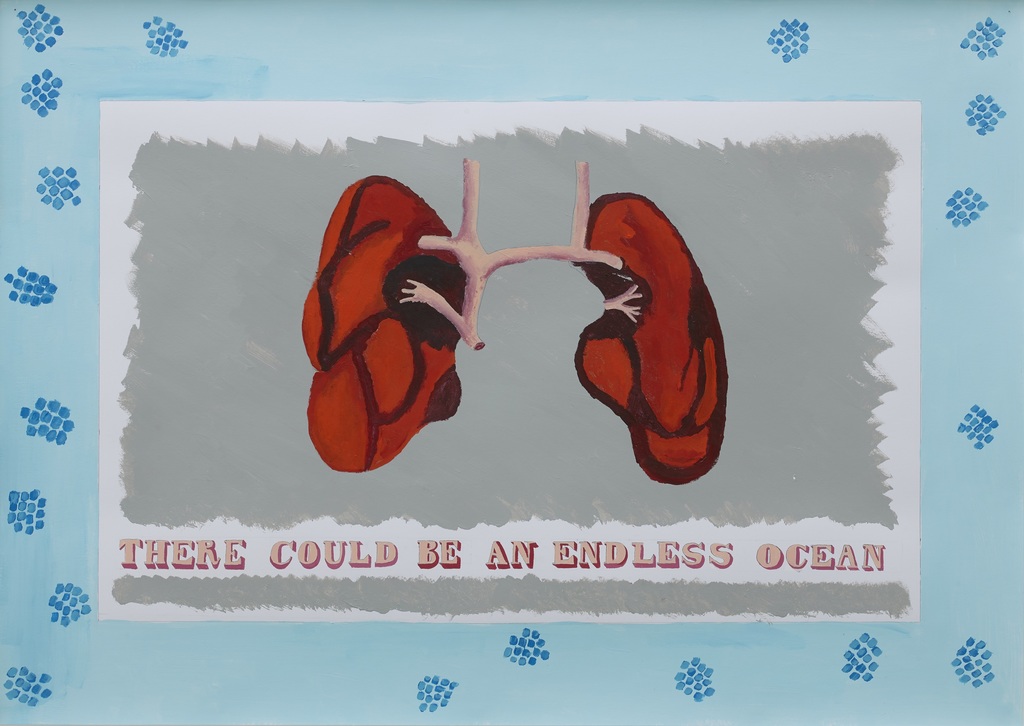 Having forged a path for herself and for other non-white female artists for decades, is it any wonder that Himid returns time and again to the image of women strategising? Between the Two My Heart is Balanced (1991) sees two women tearing up a stack of maps and dropping them in the ocean: ripping up the old ways and coming up with new, fairer methods, the painting is a riposte to a work of the same title by James Tissot and a riff on the French artist’s Portsmouth Dockyard (c. 1877), which shows a Highland soldier torn between two prospective lovers. 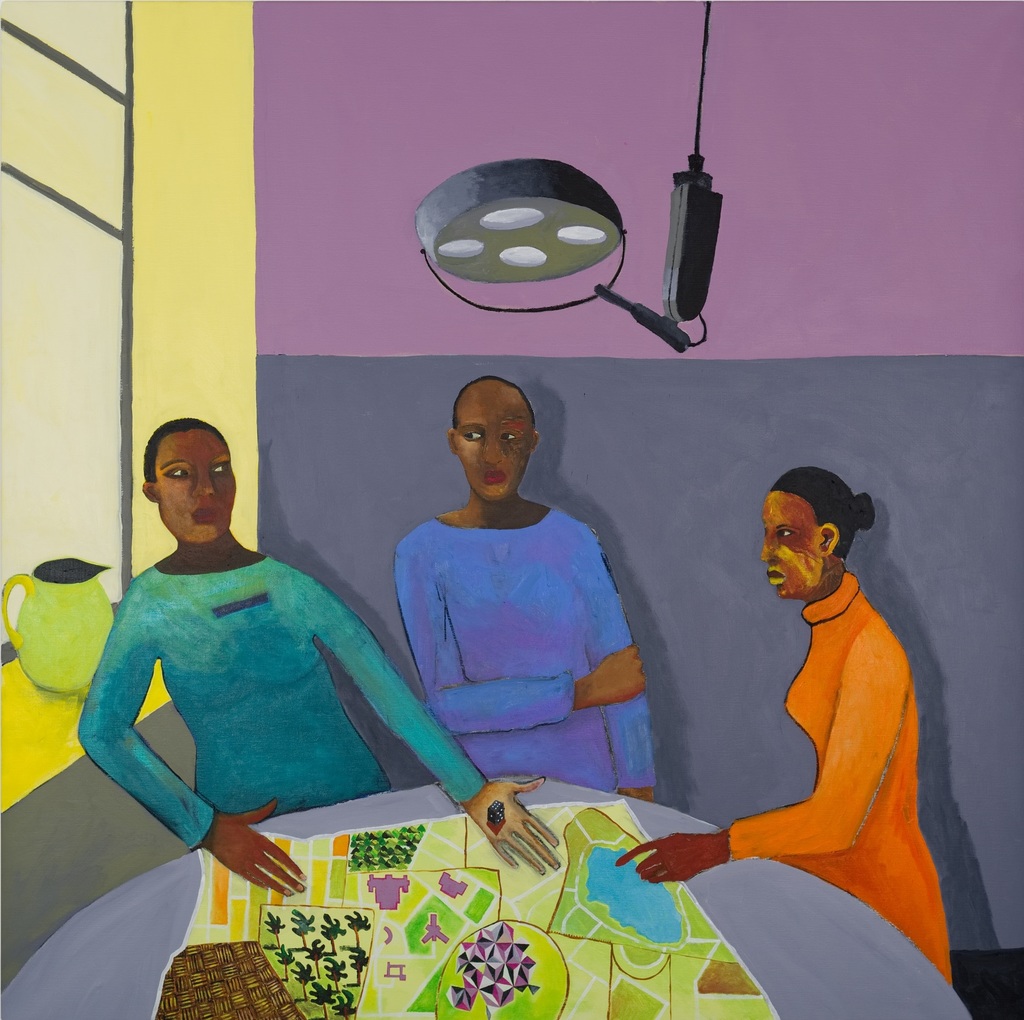 Meanwhile, The Operating Table (2019) shows three women in debate over a map: the one in green on the left wants to forge ahead with a roll of a dice; her foil in a clashing orange jumper clearly has other ideas, while the third woman between them hedges her bets. 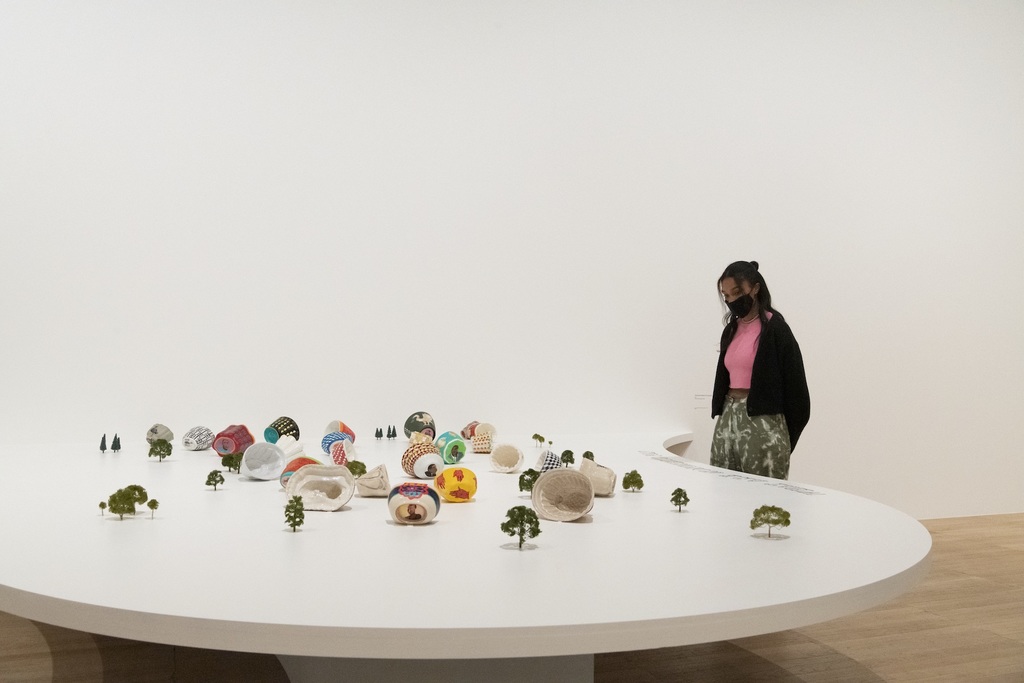 This painting is a companion piece for Three Architects (2019), which presents another trio working towards a common goal from opposing viewpoints in a vividly coloured studio. These two works in turn triangulate with Six Tailors (2019), and all ask the question of whether our clothes and buildings – the things and spaces we inhabit – can really be said to fit us?

At Tate Modern, Three Architects is sited opposite Jelly Mould Pavilions for Liverpool (2010), which stages a fictional architectural competition to design monuments for the city. Repurposing Victorian jelly moulds to interrogate how cities and monuments are moulded – those sweet treats becoming popular off the back of Caribbean sugar plantations and the transatlantic slave trade (Liverpool controlled over 60 per cent of the British and over 40 per cent of the entire European slave trade by 1795). 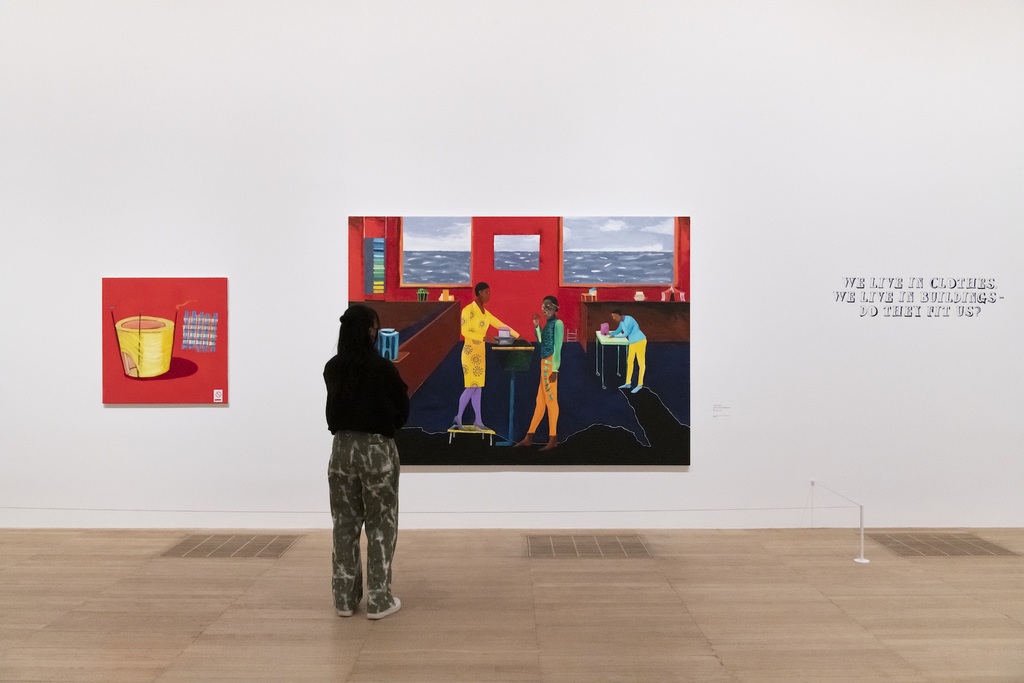 Meaning ‘The Prowler’ in English, Le Rôdeur was a 200-ton cargo vessel that left Le Havre on 24 January 1819 bound for West Africa. During its ten-month return voyage (from what is now Nigeria), a mysterious eye affliction rendered almost everyone on board blind and 39 African slaves were thrown overboard. 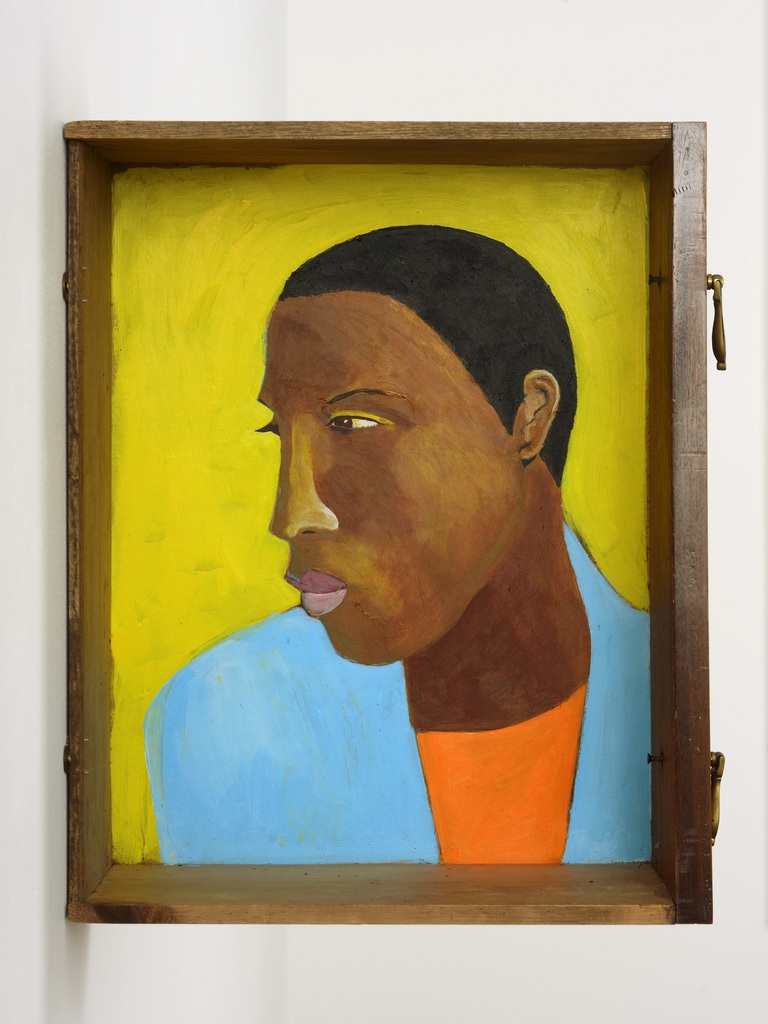 The sea, then, becomes a coded pattern, an historical site of terror on the one hand, as well as a passage to possible refuge. Himid explored this tension in a series of late 90s paintings; consisting of empty rooms, scattered chairs, fabrics and fierce waves, the works are the product of the artist’s residency in one of the life guard huts on the beach in front of Tate St. Ives. ‘The experience of intensely watching as the sun, the sea and the sand shifts, churns, appears and vanishes while I mix new purples, blues, greens, yellows and pinks,’ she said. ‘Trying to catch this break-neck movement on paper seemed like living a life and dying in the same day - day after day.’

While Himid describes a kind of artistic freedom (‘Everything shifted; the safe ideas became more dangerous and the risky strategy became the blueprint.’) many of the works have a bleaker outlook, abandoned office blocks battered by wind and ocean. The backs of chairs, with their vertical lines, resemble the bars of prison cells.

The smell of salt in the air and the sound of distant waves brings us back to Le Rodeur, the tableau of a featherheaded woman consoling the man on the bench. Meaning ‘The Prowler’ in English, Le Rôdeur was a 200-ton cargo vessel that left Le Havre on 24 January 1819 bound for West Africa. During its ten-month return voyage (from what is now Nigeria), a mysterious eye affliction rendered almost everyone on board blind and 39 African slaves were thrown overboard. There is something of Greek myth or fairy tale in this story of sudden, widespread blindness – and to Himid’s ‘flat’ aesthetic – but sadly it is all too true. 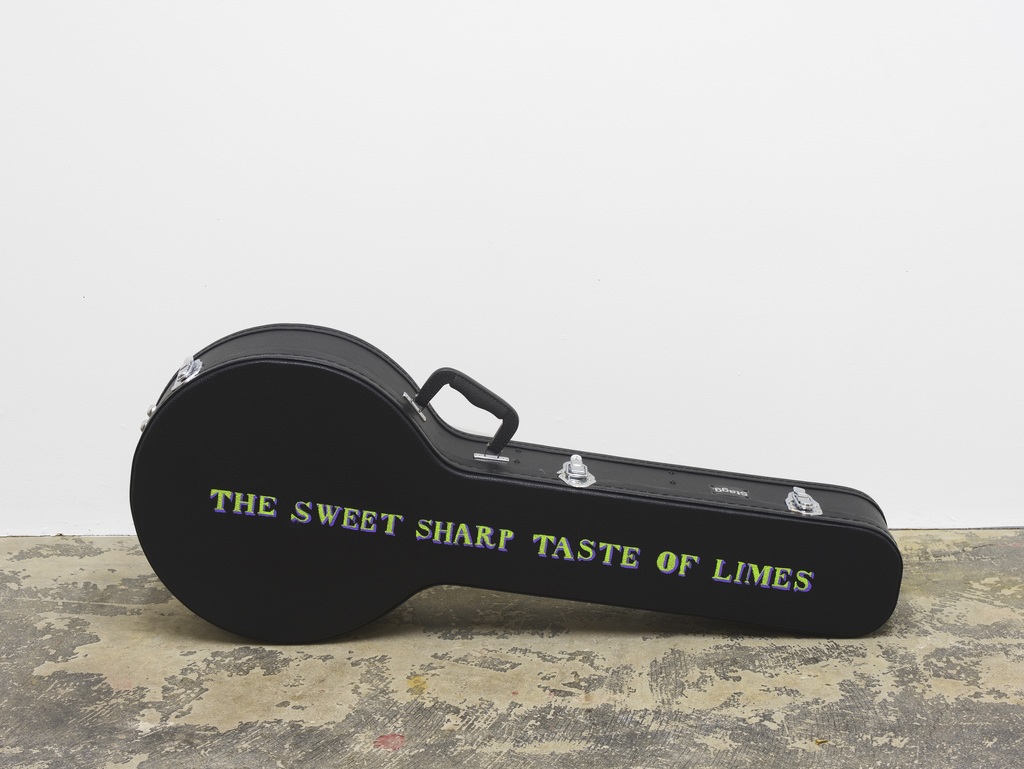 This history is hinted at in The Pulley (2017), another from the series. We could be on a stage set or in a dream; inside bleeds into outside, the sea raging all the while. The Pulley of the title suggests a power shift. A swathe of fabric hanging from the rope system is decorated with cowrie shells, a currency that contrasts with the modernist chairs being rearranged on the yellow deck-cum-furniture-showroom. The two female figures here are turned away from one another, yet something mysterious seems to bind them together. For me, it has to do with their feet. The toe of one woman seems like it almost touches the heel of the other; as if involved in a dance, the pairs of feet are painted with all the lightness, care and precision of a ballerina.

Just because something is out of sight doesn’t mean it is out of mind, this painting seems to argue, and yet on another glance, it argues the opposite: there is wisdom in admitting that we all have our blind spots. Ever arguing that there are different routes to the same answer, staging new debates and exchanges, and unafraid to conclude that certain things simply make their own poetic sense, Lubaina Himid challenges the rigidity of the structures we inhabit, so that we might make them a better fit.