“The Suburbanisation of Life is Not the Only Solution”

In October 2020, Alejandro Cartagena’s illuminating Carpoolers series travelled down a satisfying new road: ordinary commuters spotted from an overpass in Monterrey, Mexico were viewed by ordinary people in an underground tunnel in King’s Cross, London – also very likely commuting – as part of a group show of social documentary photography called Face to Face. 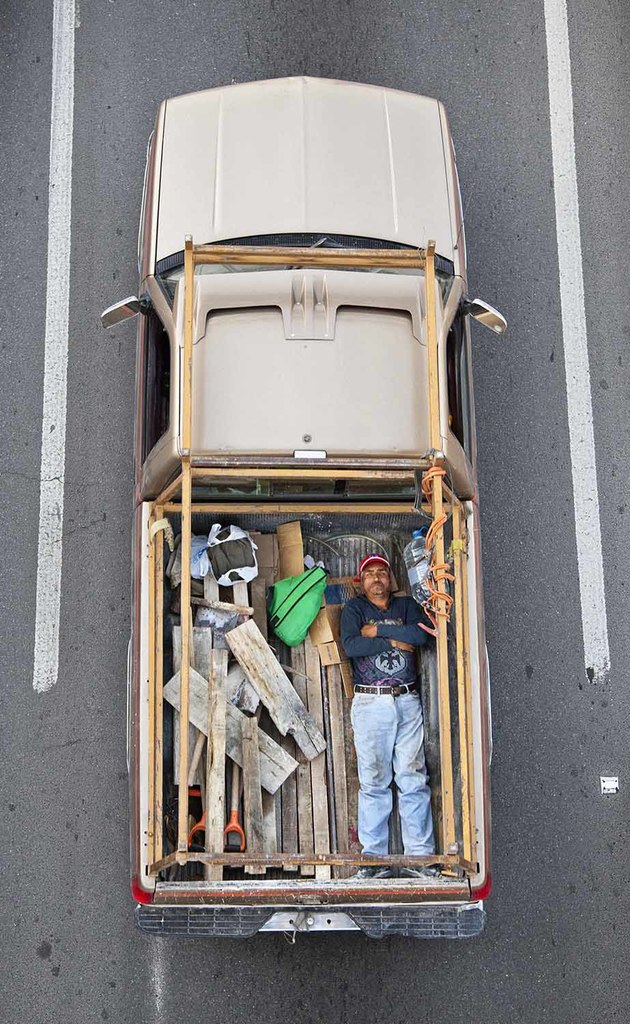 For Cartagena, who is one of four artists shortlisted for the 2021 Deutsche Börse prize, that was an interesting dynamic. ‘If one person takes a little time out of their life,' he said, 'and thinks, “Wait a minute, I’m always” — sorry — “bitching about the thirty minutes it takes to get to work,” and then they see how these people have to go to work, risking their life every day in an unsafe way. Maybe something will spark to make their life better, you know?’ I do. 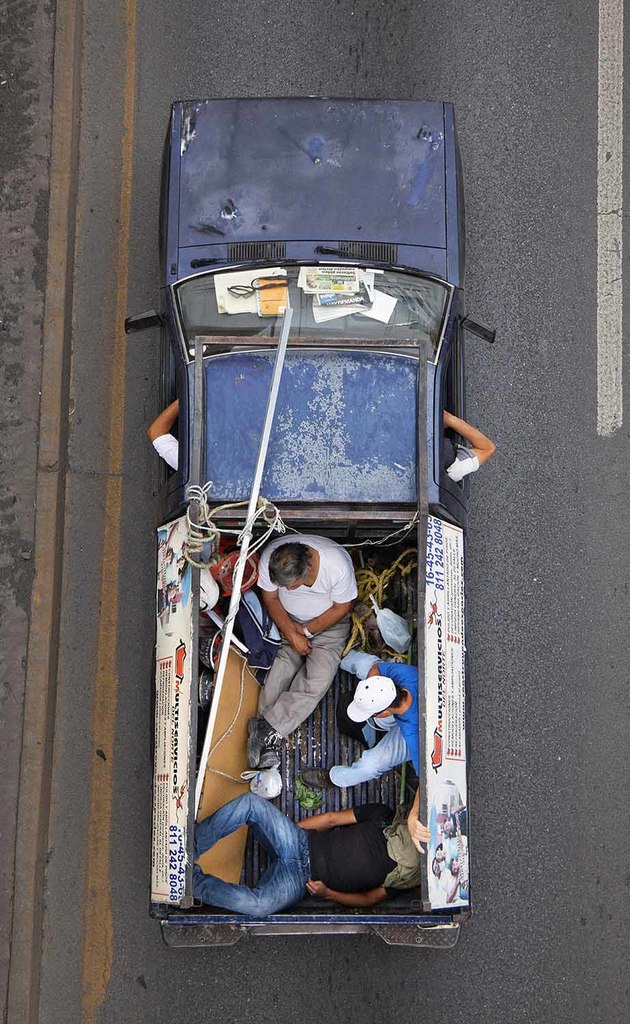 “The way we shape our cities, and the way they in turn shape us, feels ever-present in Cartagena’s practice.”

Between 2011 and 2012, from a vantage point on a motorway overpass in Mexico, Cartagena trained his camera down at pickup trucks carrying a very specific kind of cargo: men on their commute to work, lying down next to wheelbarrows, ladders and tools. Occasionally, throughout this series Carpoolers, we see a cheeky grin, as one of these men notices himself being snapped — it’s the simple pleasure of being seen. A conspiratorial glance. And it’s hard not to find these smiles infectious. 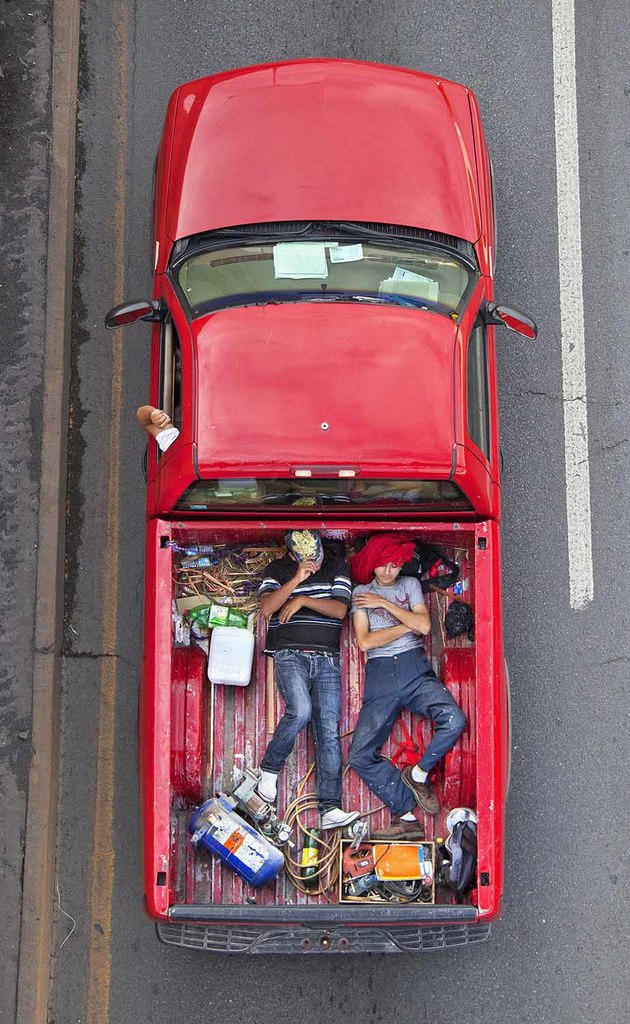 The way we shape our cities, and the way they in turn shape us, feels ever-present in Cartagena’s practice. Based in Monterrey, the photographer frequently examines social, urban and environmental issues; his series Carpoolers continued his fervent exploration of unchecked suburban expansion in Mexico and earned him recognition at the Sony World Photography Awards. Regularly published in the likes of The New York Times, Le Monde, and the New Yorker, Cartagena’s photography is held by cultural institutions across the world. 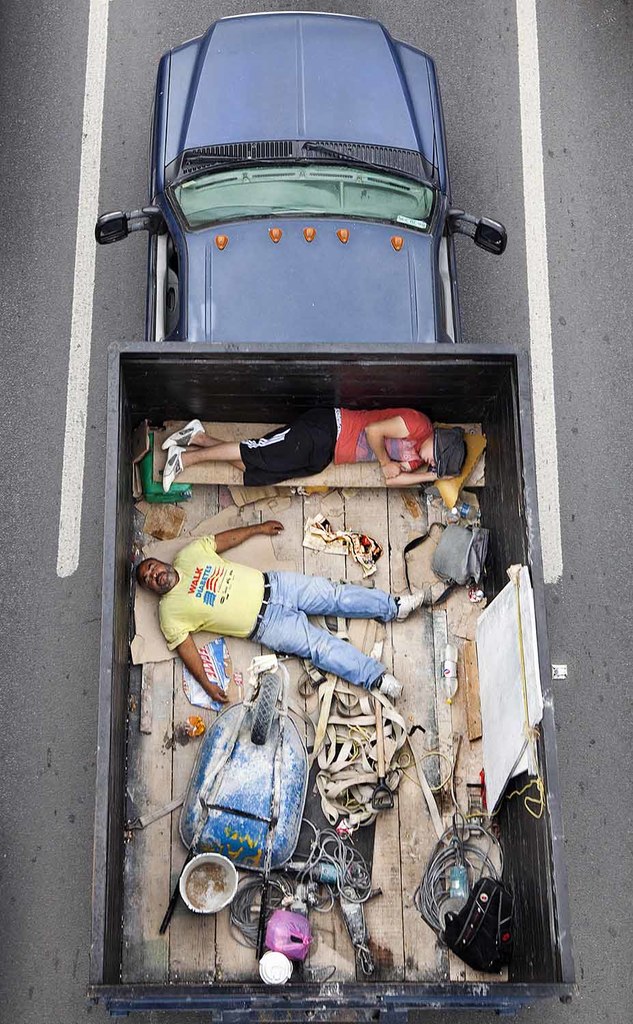 Cartagena explained that he was ‘scared’ to embark on Carpoolers at first, ‘because, stylistically, it was a big departure from what I was photographing before.’ The luxury of time and large format cameras both go out the window when you’re spotting a vehicle on one side of a footbridge and rushing to the other side to catch it before it speeds off — not to mention when you’re in Monterrey, Mexico, at the height of a drug war, and police are constantly asking what you’re doing out taking photographs in the middle of potential crossfire. A lightweight digital camera, impeccable timing, and nerve were what Cartagena required for his carefully calibrated game of Pooh sticks.

‘There’s humour in the images,’ Cartagena agreed. But he went on, ‘There’s also dread. It’s like, what would happen if these people crashed?’ Beyond comedy and fear and the elegant simplicity of the series, there is its form: ‘It’s on the fringe. It’s a portrait, it’s a landscape, it’s street photography, it’s many things at the same time. And I think that makes for an appealing work that opens up many, many, many conversations.’ I couldn’t agree more. Sometimes a simple image can lull you into difficult discussions. Time to have some.

“it’s a very personal take on what the Mexican dream could be.” 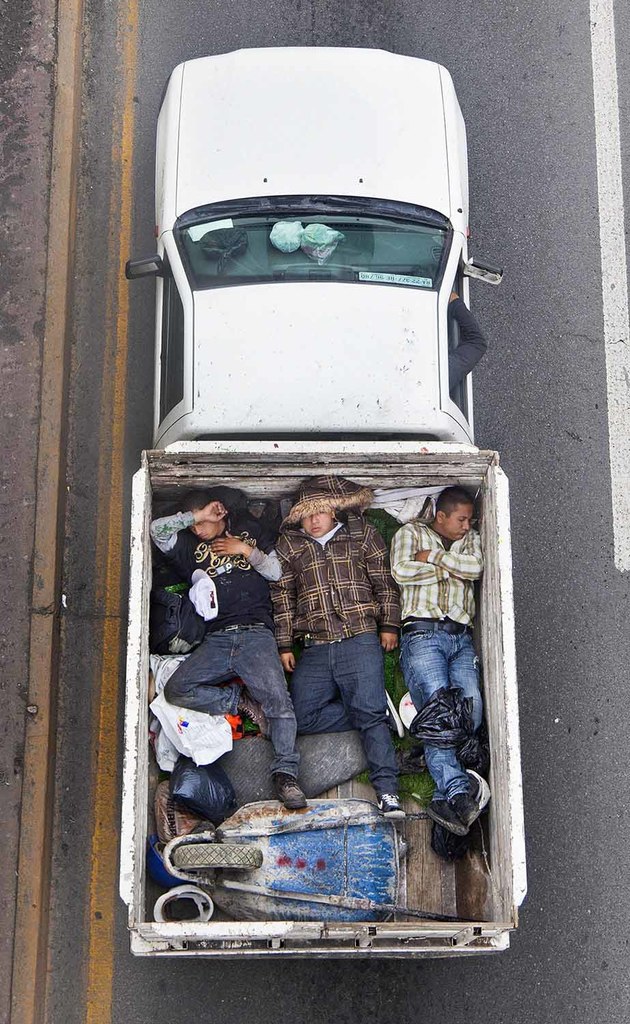 Previously, Cartagena had been shooting dried-up riverbeds, cranes and empty streets in the hastily built foothills around Monterrey, where the photographer has lived since the 1990s. In the series Suburbia Mexicana (2005-10) (completed the year before work on Carpoolers began in earnest) rows of colourful houses appear almost collaged next to picturesque mountains — and, as far as Cartagena is concerned, they might as well have been cut out of one place and stuck down in another. To him, the suburbs are ‘funky copy pastes of what our northern neighbours [i.e. American city planners since at least the 1940s] have done’.

In other words, the fragmented composition in Cartagena’s suburbia is less stylistic than a direct reflection of fragmented (and misguided) urban planning; rapid urbanisation in pursuit of immediate financial gain; and a disregard for sustainability. In many cases, these suburban developments exist without the necessary infrastructure for a reasonable quality of life. While his style and method might have necessarily shifted for Carpoolers, his theme remains consistent: ‘it’s a very personal take on what the Mexican dream could be. 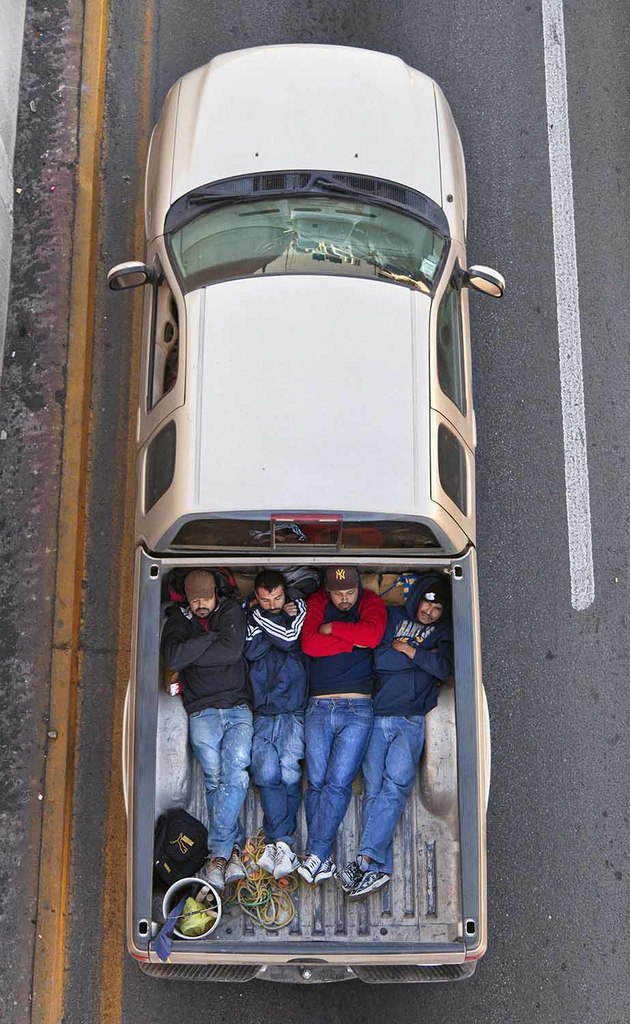 ‘When you impose an idea [such as] homeownership,’ Cartagena said, ‘in a country where the basic needs of human safety are not taken care of, it just creates complete chaos.’ For instance, one of the issues that Carpoolers touches upon is ‘the amount of time people spend driving to get to work, because they decided to buy a house two hours [away]. It’s inhumane,’ he added. I can imagine how immiserating it would be, but ‘inhumane’? I might need some more convincing.

The photographer has a knack for persuasive soundbites — ‘The suburbanisation of life is not the only solution’, ‘You can’t copy-paste culture’ — but he’s even better at telling stories. He described a woman he met on the outskirts of Mexico City when he was documenting suburban communities there. She gets up at four, takes a van to a bus that takes her to the highway, gets off and on to a bigger bus, before taking the Metro to a department store that pays her ‘basically nothing.’ 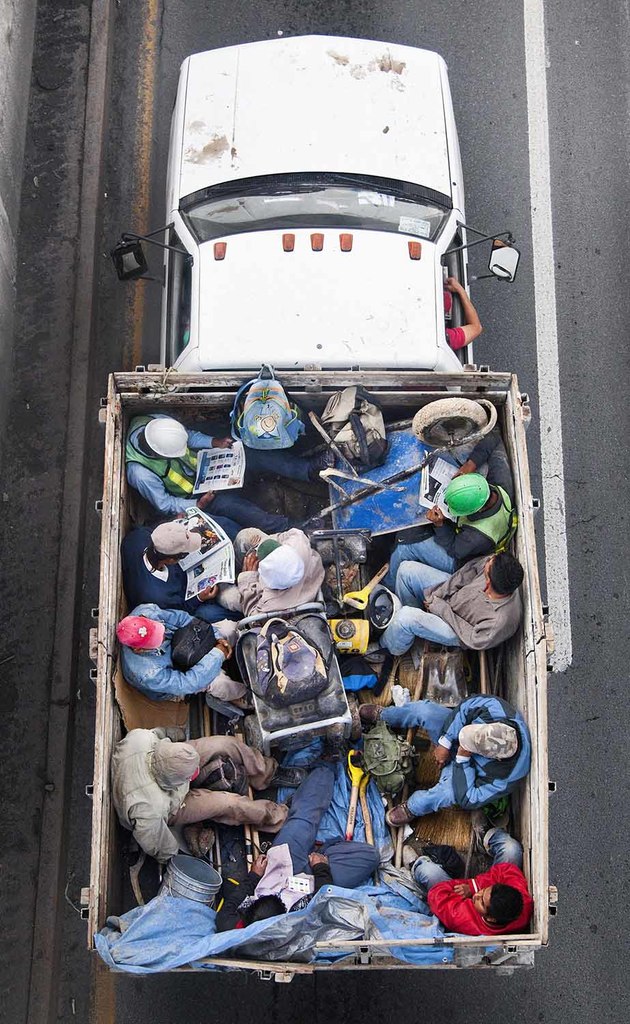 Now, zoom out a little, Cartagena explained, and you see a privatised and quite probably ‘mafia’-run public transportation system, where profit, not living standards, are of primary interest; it’s left up to ‘pirate buses’ to connect some areas of the suburbs to the metro area. Zoom out further still (and one of Carpoolers’ most compelling aspects is how its framing nudges you towards an overarching, bird’s eye view) and you might see suburban developers selling ‘pirated houses’, which ‘look exactly the same as the official ones’. Only, since they are not officially registered, no-one is checking whether services are being neglected, meaning no water system, no gas, or electricity, in some cases. Cartagena described one community he visited who got together to solve electricity and water issues on their own, and one suspects they are not alone.

When Cartagena was working on Carpoolers, ‘It was the height of the drug war […] It was the moment when beheaded people were being hanged from bridges.’ The war reached its peak when the narcos burned a casino, murdering more than fifty civilians trapped inside. Yet, Cartagena kept his gaze trained on his carpoolers, and not on these atrocities. ‘I was photographing the daily life of men — men who were deciding to hold down a job [rather] than going into the drug war. For me, that was so important to photograph, not the drug war, but daily life. In the middle of all this turmoil there is still a dream, there is still hope, there’s still this massive resilience to keep life going.’ 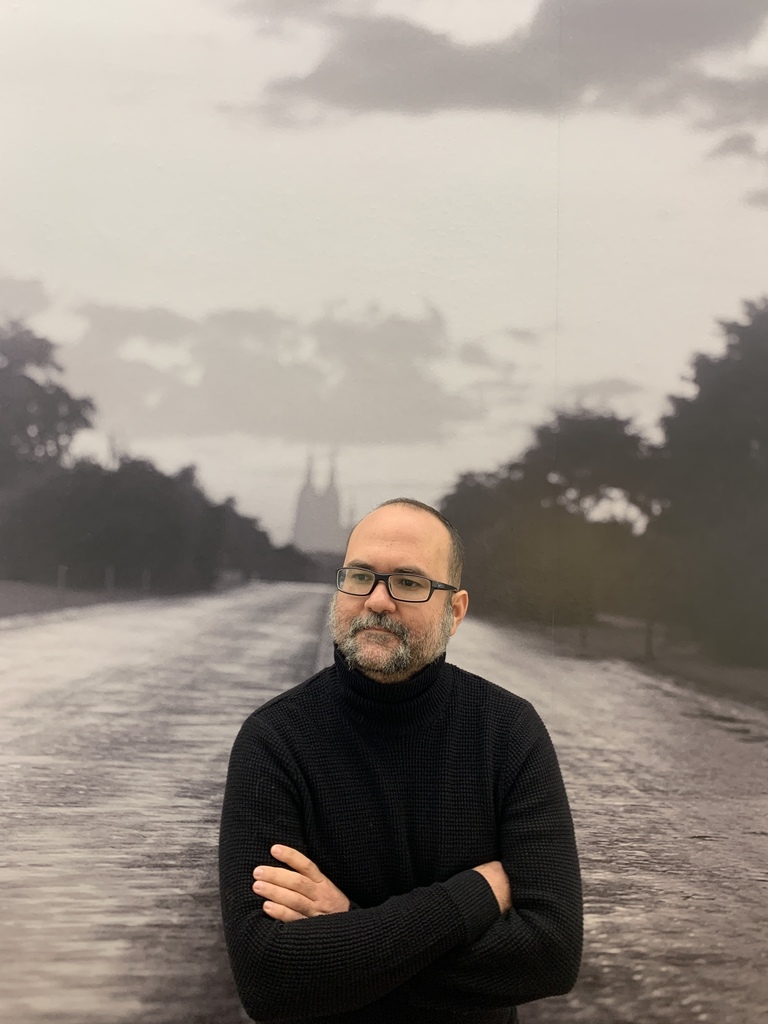 The photographer drew a parallel with the Covid-19 pandemic. ‘I mean, that’s what we’re all striving towards now, trying to keep a little level of normalness, if we can call it that.’ We sure can. He described the ‘sensation of uncertainty’ that the pandemic has brought with it, a feeling that reminds him of the drug war. At that time, his parents had to close their business because of the violence. He and his wife imposed a curfew on themselves — no going out after 6pm. Meanwhile, newspapers published conflicting stories about who was involved. Uncertainty, precariousness. But amidst it all, everyday resilience.

If Cartagena’s work can make violence — of any kind — visible, then does that make him an activist? I asked him. ‘Okay,’ he said. ‘So I think I have responsibility with my work’ – that is, a responsibility to be honest and sincere — and ‘to know what I’m talking about.’ He would distinguish himself from political activists, ‘because I am not good at that.’ Rather, he feels his strengths lie in ‘understanding what’s happening, what’s happening to my city, to my co-citizens, and my commitment is to be as knowledgeable as possible’.

“there is still hope, there’s still this massive resilience to keep life going.”

Nonetheless, Cartagena’s project What We Fight For (2010-20) — which documented the conflict involved in public spaces that were being privatised, or vice versa, private places made public — saw him attending meetings and ‘seeing firsthand what it meant to actually organise a civilian to fight against state plans’. He showed me a newspaper that he published as part of this project that includes photos and, on the back page, a wall of words.

‘I created this lexicon of conflict’, Cartagena explained. He gathered the most common words and phrases that are used when people are fighting for space and printed them in alphabetical order. It’s a way of empowering people with the language they might need to fight for a better way of life, I suggested. ‘Exactly,’ Cartagena said. And if the old idiom makers are right, and a picture paints a thousand words, then Carpoolers — and Cartagena’s photography more generally — imbues us with entire visual vernaculars for advancing and developing an urbanisation with sustainability and social inclusivity at its heart.

Face to Face was an exhibition curated by Ekow Eshun in collaboration with the Fund for Global Human Rights. You can learn more about the organisation's work with grassroots activists in Mexico here.

Alejandro Cartagena has kindly made two limited edition prints available. Proceeds from sales of the work will directly support the work of the Fund, helping to equip locally-rooted activists and organisations with the right resources to affect change in their communities around the world.