When queues of design aficionados and rock-and-roll-royalty assembled at the door of a North London sixties maisonette last weekend, we wanted to know what all the fuss was about. Curated by its owner, Dr. Peter Kapos of Systems Studio, the family-home-cum-exhibition-space reflects his passion for design brands Braun and Vitsœ. Fifteen years of fairly obsessive collecting has seen him amass a hoard spanning everything from 1950s Braun shavers to 1970s watches, from rare Vitsœ shelving to Artemide lighting. It’s the kind of collection to make German design students weep – and certainly, there has been some tearful reminiscing in his (exquisitely cool) kitchen since the doors opened and the aficionados poured in.

It’s the kind of collection to make German design students weep – and certainly, there has been some tearful reminiscing in his (exquisitely cool) kitchen since the doors opened and the aficionados poured in. 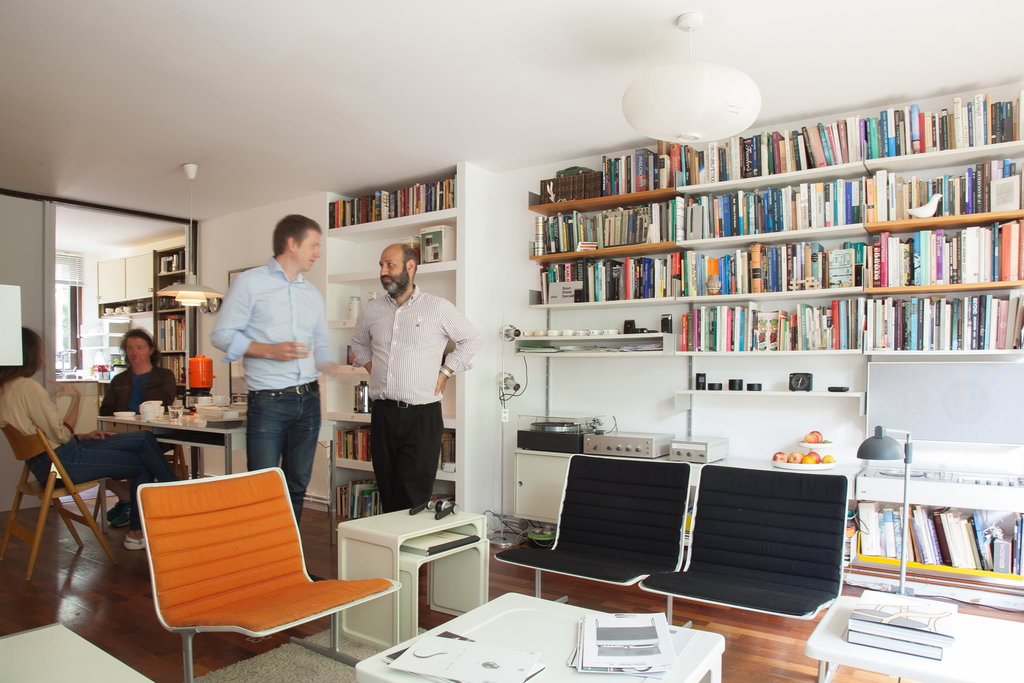 The focus of the maisonette’s open-plan living area is a group of 60s chairs in bright primary colours which overlook a terrace filled with greenery; meanwhile, wall-to-wall Vitsœ shelving is stacked with novels, design tomes and rare examples of Dieter Rams’ early designs for Braun. Drinking coffee poured from a steaming stove-top affair (Braun, of course) around Kapos’ Vitsœ desk, which serves as a dining table, I catch my reflection in a mirrored stainless-steel toaster on the wall opposite. It is, I realise, precisely the model famously depicted by artist Richard Hamilton in his work ‘Toaster’, 1967. An ardent admirer of Rams’, Hamilton turned both the object and its accompanying ad-copy into a print, today in Tate’s collection. The only change to the object was to substitute the red Braun logo for the artist’s own name.

Kapos reflects on a tension within the Braun Design studio during the 50s and 60s, when the objective was to create ‘rational’ objects – toasters, food mixers and coffee machines – which were, at the same time as fulfilling a utilitarian function, highly desirable. “So you get this odd combination of a kind of fetishism around particular objects, the desirability of objects, which is not rational – and then at the same time, a desire to rationalise.”

If Jeff Koons put a Hoover in an art gallery and Richard Hamilton turned a toaster into a limited edition – when do domestic appliances become installations? And when do household objects become art? 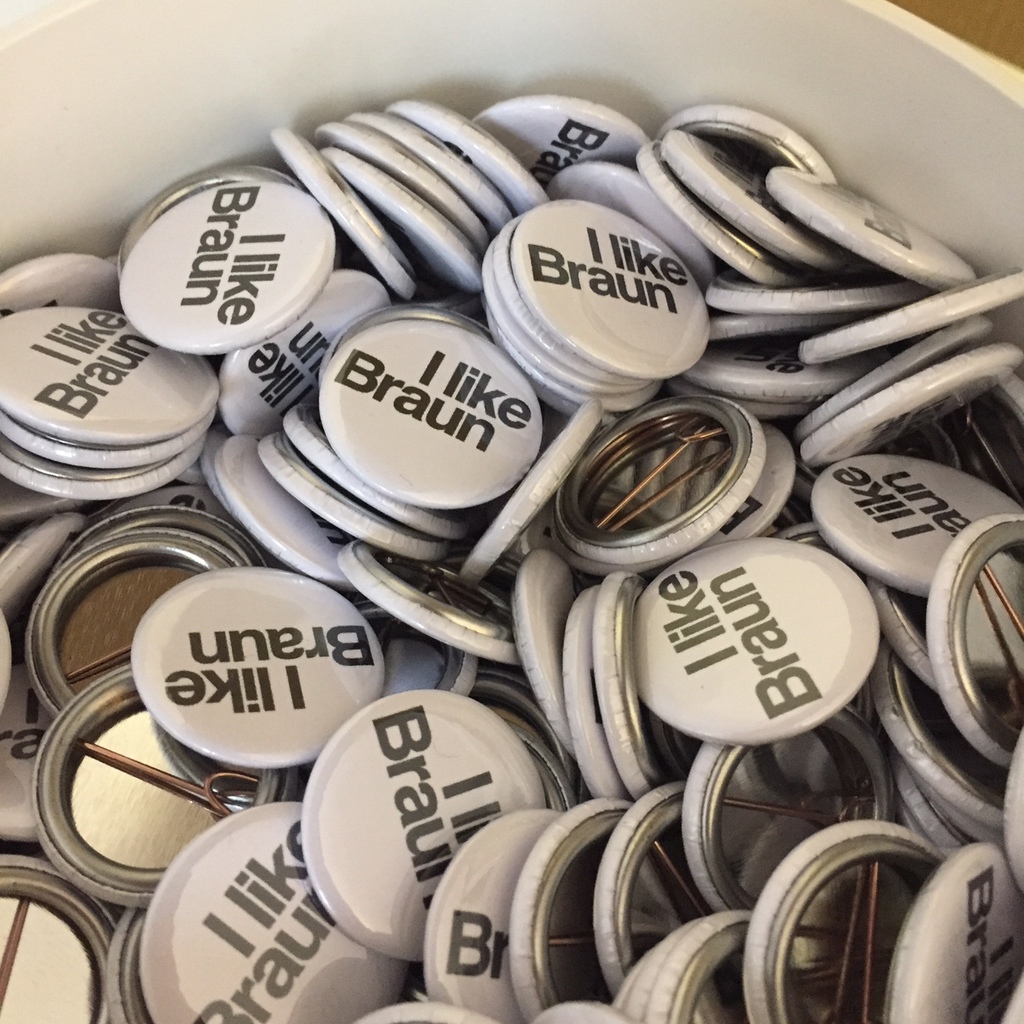 Before ‘Toaster’ came Hamilton’s celebrated 1956 collage – ‘Just what is it that makes today’s homes so different, so appealing?’. It features a Hoover, a television and a sound-system; the work’s question is in the title. Amidst an array of Braun products, stereo systems and gadgets, the answer would seem to lie within a brutalist concrete block in North London, more than 60 years later…

If Jeff Koons put a Hoover in an art gallery and Richard Hamilton turned a toaster into a limited edition – when do domestic appliances become installations? And when do household objects become art?

When Braun began in the 50s, it was part of a German Functionalist design programme which was about honesty, straight-forwardness, clarity, self-evidence; really it was a response to the war. They were re-building and they wanted to do everything again completely new and to do it ‘correctly’. They had this very strict, very rational approach to the design which was developed at the Ulm school – Ulm supplied the plan for the Braun 60s programme – and it developed into the consumerism of the 1960s. The oddness of Braun in the 60s was partly that they were able to realise that plan, but only under the constraints of a developing consumer capitalism.

How do you think these designs relate to contemporary designs for Apple, in terms of simple, functional design?

It is formative of Apple, which is very dependent on 60s Braun design. But whilst it’s true that Apple have helped themselves, I think originality is a value which is slightly overrated.

Are there ever really any new ideas?

I don’t think that really matters – it’s more important what you do with the ideas, how they are developed. Dieter Rams gets glorified in a way, which overshadows the more interesting aspects of [Braun’s] project. Braun and Vitsœ belong to a tradition of thinking about environments; not just thinking about producing enjoyable domestic environments, but also thinking about design socially – yet, focusing on individuals is, in some ways, anti-social. 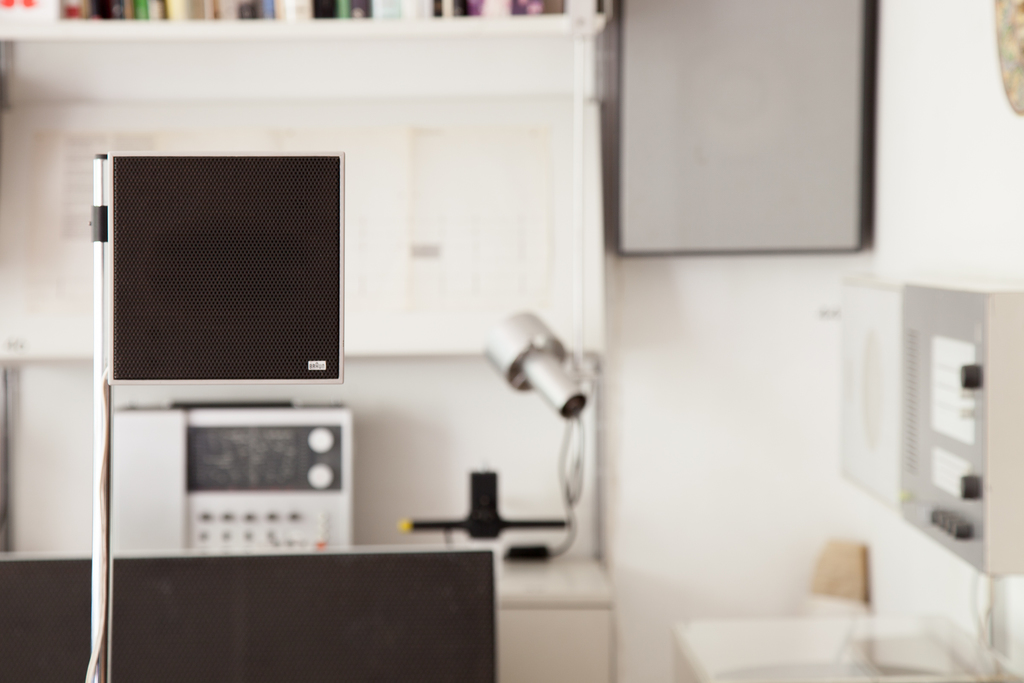 How do you feel about collective-design versus individual?

It’s partly a marketing issue – the story’s easier when it’s an individual’s vision than if it’s a group project, because that’s harder to explain. It also reflects something more general which has to do with our social attitudes, which are geared towards individualism. On the other hand, the design itself, if we stop to examine it, might be more socially oriented. That was the purpose of Braun Design from the start. It was intended to transmit principles of clarity, order and straightforwardness. Interestingly the brand is beginning to rediscover those principles in the design of its recent products.

The toaster looks like a Richard Hamilton print – was Braun all about making objects that are really desirable?

This 1960s Braun cookbook is really interesting. It’s a recipe book and it’s also a way of marketing the devices. It’s targeted at women – you’ve got the convenience and easy-clean of your Braun devices, but now go and cook all these things. It’s a massive work burden and establishes an expectation which is far from liberating. 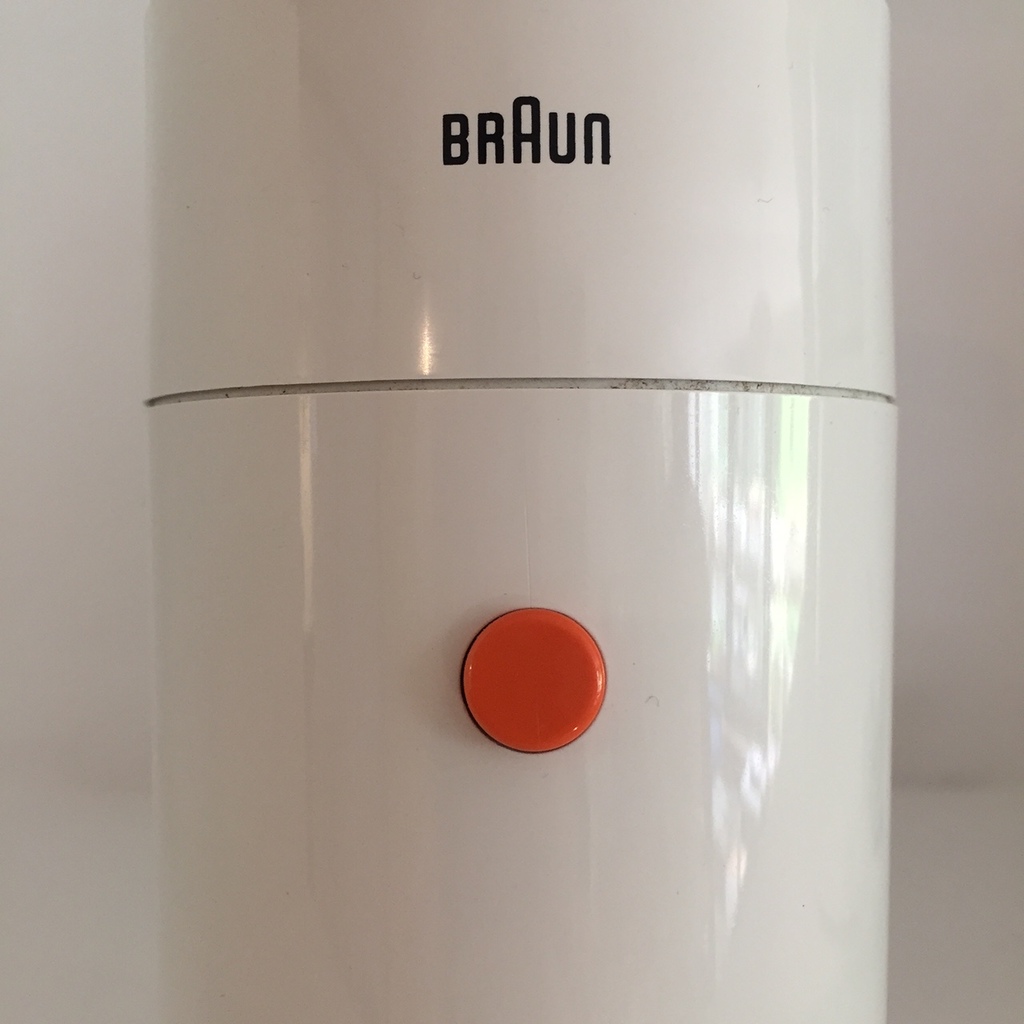 Tell me about the exhibition.

This is semi-naturalistic presentation – we’ve overlaid numbering (for the exhibition) onto the shelving and flooring. There is a kind of a domestic situation but on top of that is a layer of museological display. There’s an element of contrivance – but also a suggestion that an consistent environment like this might be possible (not with two small children, however).

How did you start your collection?

I’ve been collecting for 15 years. I started collecting Braun clocks and slowly realised that there was more to it, but clocks were my way in. I’m currently wearing a 70s Braun watch.

Can you describe the Braun colour scheme?

Braun tended to be off-white or light grey – generally a very neutral colour with a pop. Maybe a palette of greys with a little bit of sage green dropped in, but that’s often because that’s the power switch. It’s a kind of hierarchy thing, to indicate a significant function. It’s not decorative. ‘Switches are orange.’

Braun tended to be off-white or light grey – generally a very neutral colour with a pop. 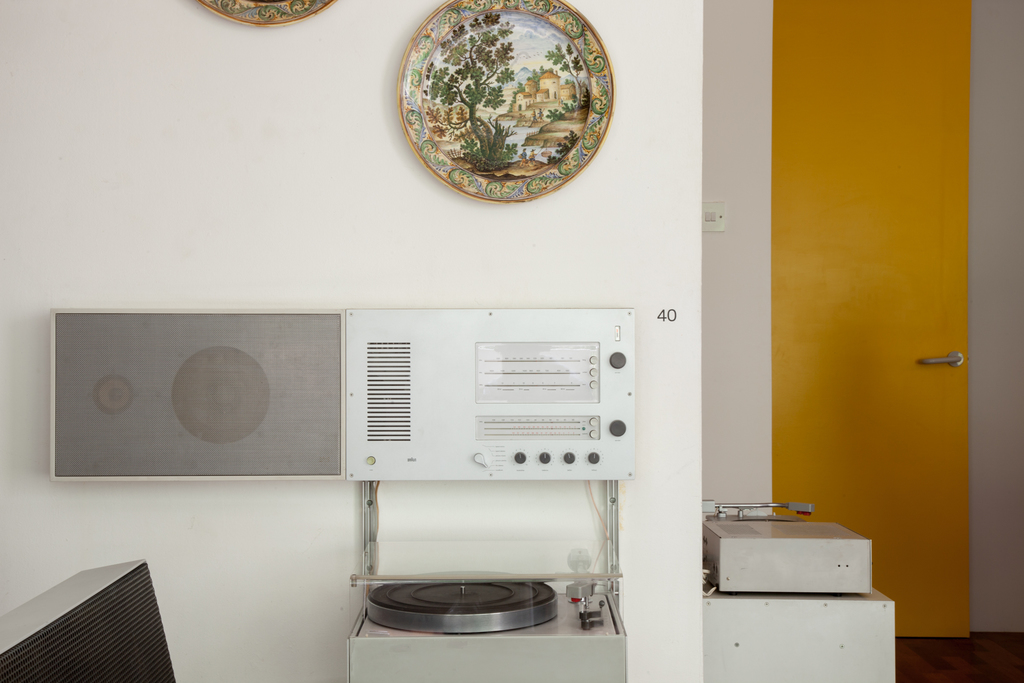 How did you design your kitchen?

The kitchen is a very early Dieter Rams design from a flat in Berlin, which we bought online and had couriered over. It’s the Vitsœ 570 system: originally it formed a large block of living room shelving. It was converted it into a kitchen with extraordinary care by Selce Studio, a pair of young industrial designers. Our kitchen utensils are stored on a Vitsœ 610 hallstand system, with hooks for hangers and for hanging umbrellas. Shelves of the 606 system, drilled and powdercoated, provide dish drainage.

How do you view the relationship between Braun and Vitsœ?

The idea of all of the design from this period, from kitchen equipment to furniture and audio, is that it all coheres into a single system. Braun in particular is often thought about in terms of a few iconic designs, frequently of Dieter Rams’. This exhibition is about drawing attention more towards the idea of whole environments, rather than featuring star objects. A lot of the designs quite literally integrate – such as the Vitsœ shelving and the Braun stereo, which fit nicely together. But other pieces, like the Braun speaker and record-player, were designed to aesthetically and physically integrate [with the Vitsœ shelving]. There’s quite a lot of overlap between audio and furniture. As a whole, all of the objects – from kitchen equipment to seating, storage and audio – lock together to create a coherent environment. The utopian aspect of this is that it suggests a world that is harmonious, rational and industrially created. 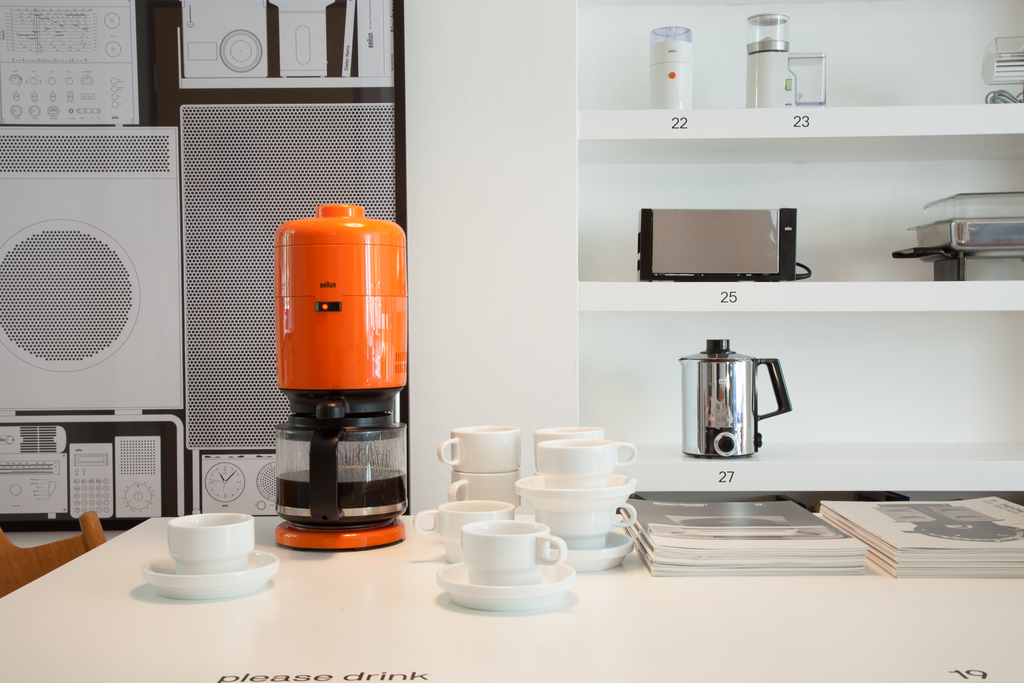 Talk me through some of the classic Braun designs.

This is a cabinet of transistor radios from the 60s. They are all fairly cheap and it doesn’t really look very hippy-ish – but it was all about freedom, getting out into the countryside and escaping the city… These designs lasted until the mid-60s when it got overtaken by status, which is all about the living room. At the time this kind of thing [gesturing to a modular wall-mounted hi fi system] would have looked completely insane – so industrial, like setting up IT equipment in your living room. Everything else was very conservative and nostalgic and veneered; even the modernist stuff looked like Scandinavian modernist furniture, rather than equipment.

*The exhibition is situated within Highgate Newtown Stage 1, a modernist housing development skirting Highgate Cemetery, designed by Peter Tábori for Camden Council and completed in 1978. The building is formed as a dramatic series of balconied terraces divided by cast concrete fins. Living areas are open plan, partitioned with story-height sliding doors. Highgate Newtown Stage 1 belongs to a set of five important high density low-rise schemes built by Camden in the 1970s. The building is an example of systems construction, and in many ways suggests a similar approach to architecture as that taken by Braun and Vitsœ to industrial design.

The exhibition was curated by Peter’s vintage Braun resource, Das Programm, designed and produced by Systems Studio, and kindly supported by Vitsœ and Braun.*