2018 marks 100 years since the first women in the UK secured the right to vote after the tireless campaign led by Suffragist Millicent Fawcett. To mark the centenary, Plinth, Deputy Mayor Justine Simons and artist Gillian Wearing are working together to celebrate London’s most influential women – past and present – with sketch, in the venue’s newly christened Millicent Fawcett Room. Now the location of the destination restaurant and gallery, 9 Conduit Street is also the address where the Suffragist leader delivered her first speech in 1869, aged only 22, to crowds gathered below a window outside.

Suffragists and -gettes had a long history of embroidering the signatures they couldn’t apply to an electoral roll to pieces of fabric via the traditionally female medium of needlework. 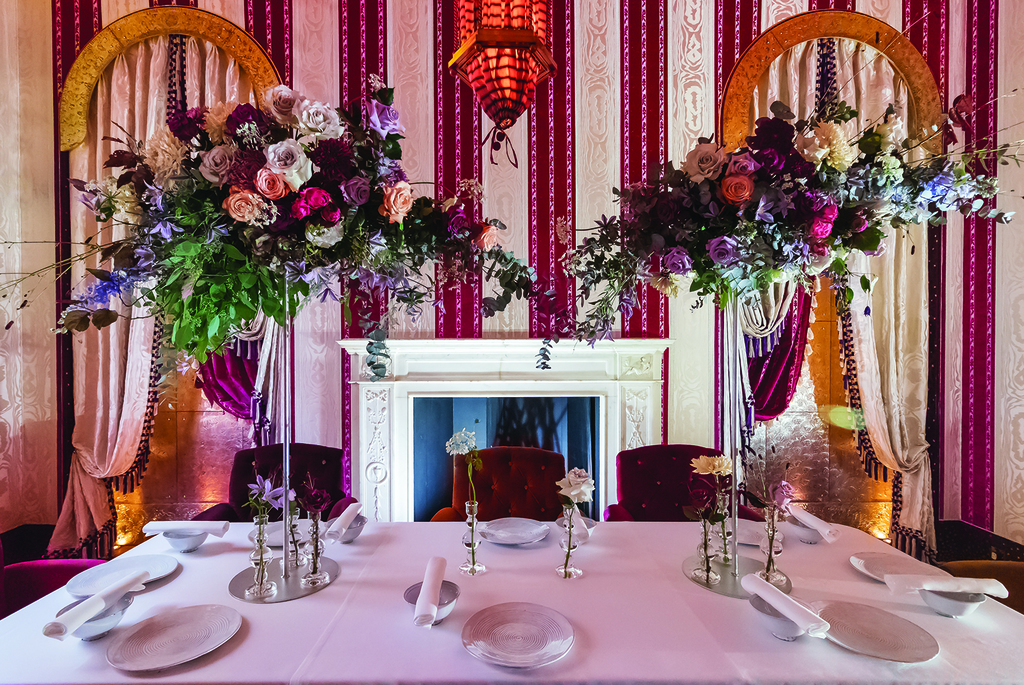 Fawcett went on to devote her lifetime to the cause of women’s suffrage and equality, and, in April 2018, a statue of her by Wearing was unveiled in London’s Parliament Square. Commissioned in response to a campaign by Caroline Criado Perez, which saw nearly 85,000 signatures applied to an online petition, Millicent Fawcett is the first statue of or by a woman to stand in the historic London plaza. The sculpture sees the Suffragist leader brandishing a placard proclaiming ‘Courage calls to courage everywhere’, and standing on a plinth emblazoned with the images of leading suffragist and suffragette campaigners.

It is from this cohort of dedicated men and women, working a century ago, that the inspiration for Wearing’s latest limited edition was drawn. Mayor of London’s Culture & Creative Industries Team and Plinth have worked with the artist to produce an edition of 1,000 embroidered handkerchiefs, each featuring signatures from 50 of these historic figures alongside those of Caroline Criado Perez and Gillian Wearing herself. Suffragists and -gettes had a long history of embroidering the signatures they couldn’t apply to an electoral roll to pieces of fabric – table cloths, banners and handkerchiefs like this one – via the traditionally female medium of needlework. The edition aspires to honour that tradition of craft, and amplify the names of activists often forgotten whilst celebrating recent triumphs in the battle for gender equality. 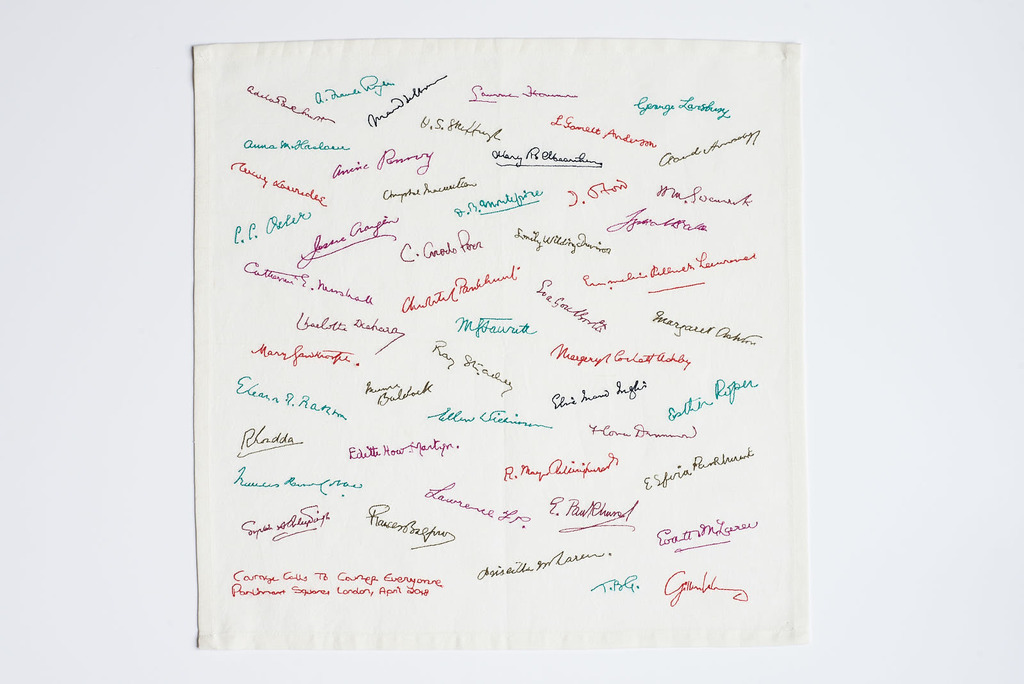 Plinth is also proud to publish Wearing’s latest collaboration with designer Bella Freud, following the release of a capsule collection alongside the Parliament Square unveiling in April. Freud has designed a tea set – tea pot, cup and saucer, sugar bowl and milk jug – featuring the slogans SUFFRAGETTE CITY, WOMEN and WHAT DO WOMEN WANT (a quote from the designer’s great-grandfather, Sigmund Freud) in Bella’s trademark graphic lettering. The graffiti-style fonts contrast charmingly with the words’ light pink colour upon delicate, gold-rimmed china. 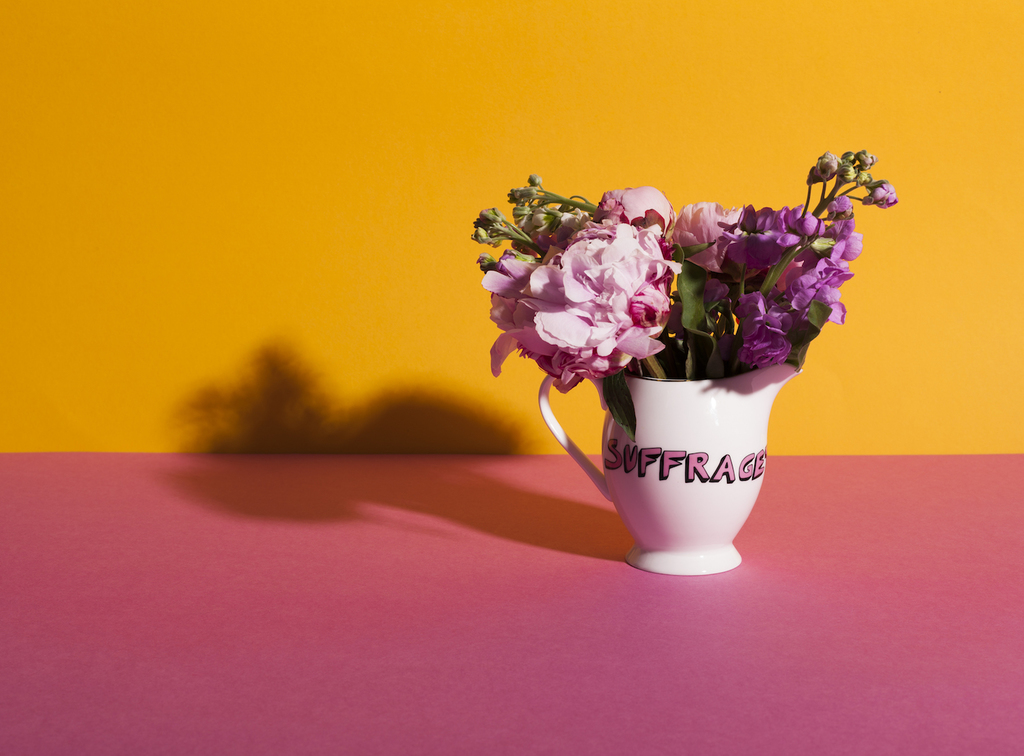 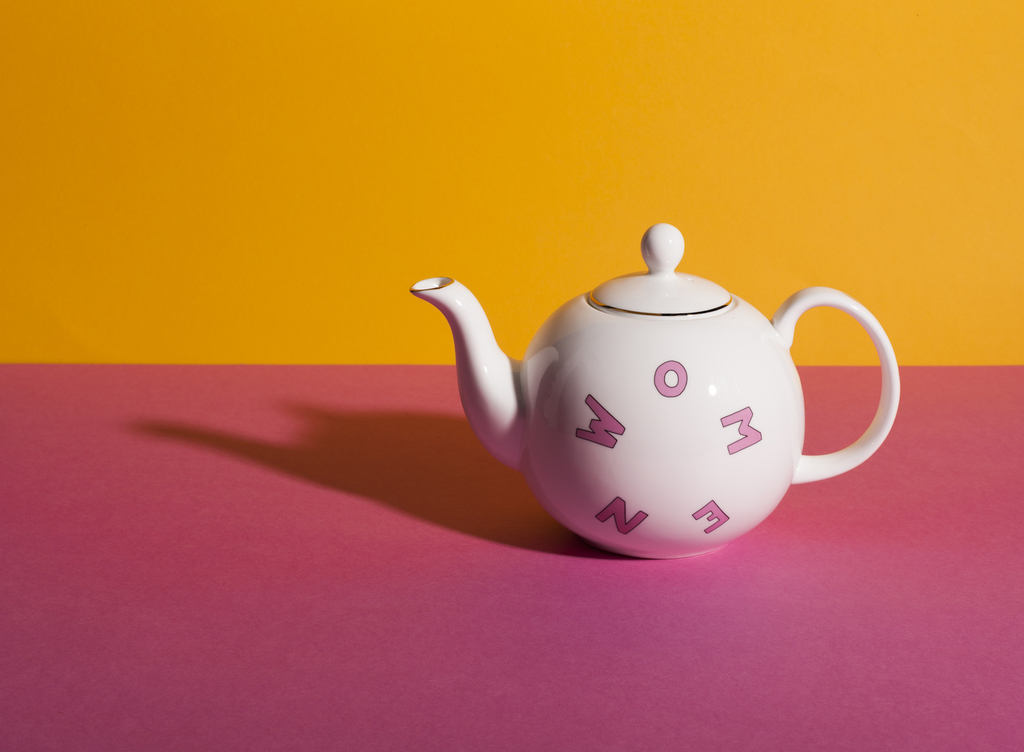 Although released in 2018, the tea set and Gillian Wearing’s editioned handkerchief are inspired by Millicent’s Fawcett’s message from 100 years ago. The projects celebrate the progress made by women since 1918, whilst foregrounding the ongoing fight for women’s rights. Part of the proceeds from sales will be donated to the Fawcett Society, who still campaign for gender equality to this day since their founding more than 150 years ago. 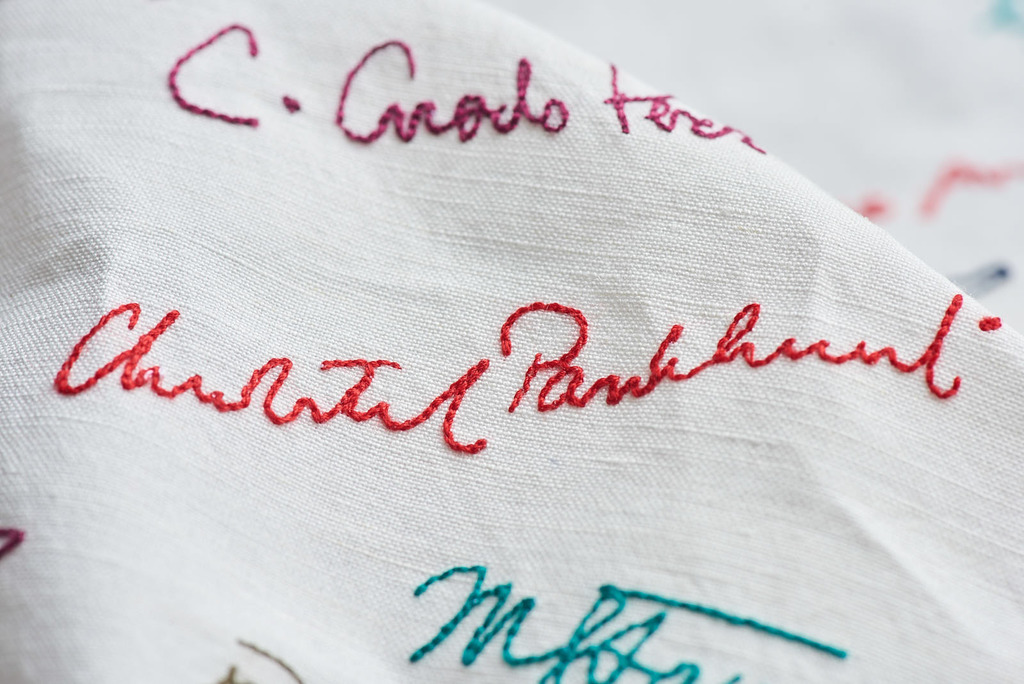