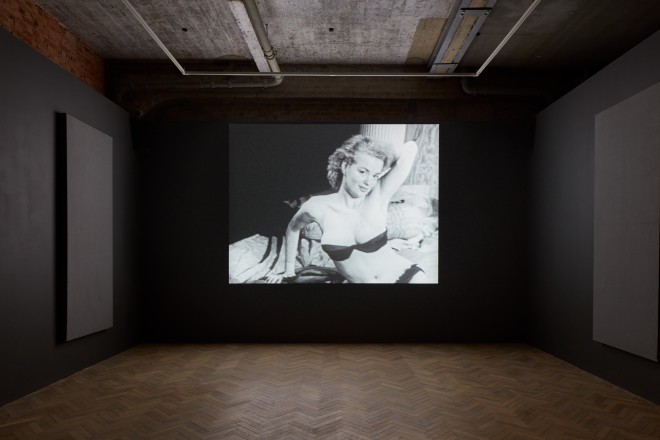 Feeling my way in the blacked-out room at Thomas Dane’s No. 11 space, I grope forwards to a seat, sit, and tune into the video projection unfolding in front of me. BRUCE CONNER, it says. A. MOVIE. BY. BRUCE CONNER. End of part Four. We’re in a submarine. Cut to a pin-up model, half way through removing her tights. Explosion. ‘All one needs to make a movie is a girl and a gun’, after all.

All one needs to make a movie is a girl and a gun. 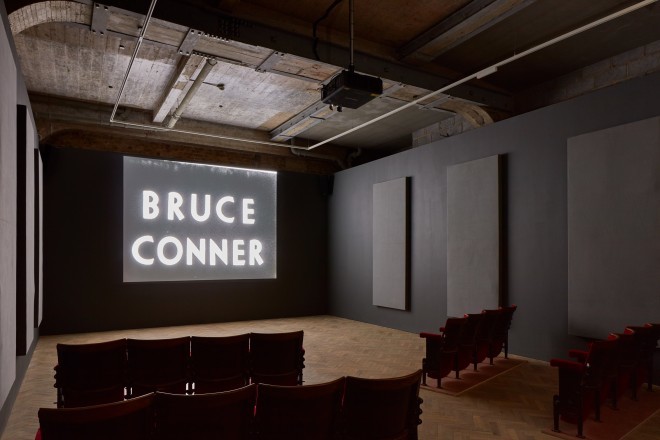 A MOVIE takes its cues from clichés of the silver screen, and what they reveal about their compilers and consumers. Made in 1958, it’s the first ever ‘assemblage’ film, finding its philosophical grounding in the movement towards the ready-made, which was gaining ground amongst Conner’s contemporaries. While Warhol, for example, focuses on silence and stasis, Conner’s A MOVIE is composed of clips dug out of flea markets, scavenged from camera shops, and hinges on energy, movement and narrative (of a sort) rather than stillness. Drawing as it does on the history of the ready-made, generally executed by repurposing objects – think of DuChamp’s urinal – A MOVIE foregrounds the physicality of the ephemeral. ‘Film’, as an art form, is not something we can touch; celluloid, the material which allows us to experience it, is. As the virtual becomes tangible, so the tangible – the ‘real world’ depicted in the footage – seems less connected to anything recognisable, physical. Explosions wash over us, hung on no logic or underlying plot than the ones they conjure out of our own associations. Of course, each clip was once part of a whole, imbued with significance lent by the magic of context and structure. We have as little to go on as the artist did, and so the dilemma becomes about who’s line you’re hooked on, highlighting the lines we bite every day without thinking. Is watching a carefully constructed collage of footage composed by a visual artist much different to consuming the latest action film in a cinema with a box of pop-corn? It’s amazing how it doesn’t feel that way, and it’s not supposed to.

Entertain us, we beg. We don’t mind much whether it’s the circus or suffering. 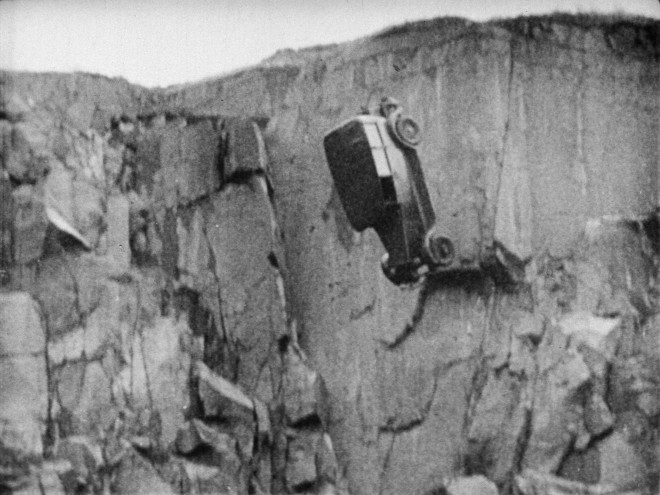 Conner spent his artistic career, and his personal life, decidedly outside the mainstream. America’s Hollywood culture and its tropes are ripe for satire, but A MOVIE is smarter than that. A filmmaker elects what to make his subject; by appropriating the work of others, Conner sends us up by revealing what really titillates. This is what you like. This was made for you. Much of ‘this’ is war; some of it is sex, some of it anguish. The West’s flagrant colonialism makes frequent appearances; the unsavoury angles and implicit voyeurism of bad documentary disrupt the fiction I’ve been trained to recognise in other clips. Malaria victims shiver in Africa in one shot, and then Indian villagers flock around the carcass of an elephant in the next. Interspersed with the scenes of calamity, framed to inspire awe as well as horrify, are montages of acrobats tiptoeing along high wires and tumbling through the air. We know how to watch A MOVIE, because we know how to watch a movie. There’s no narrative through-line, but was that ever the point? Entertain us, we beg. We don’t mind much whether it’s the circus or suffering. 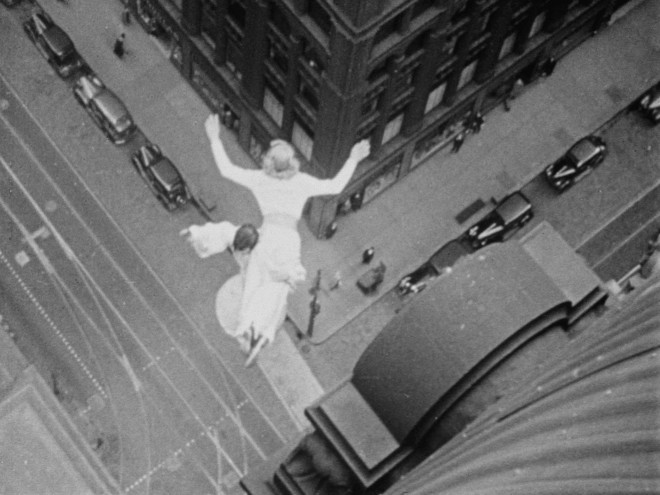 Down the road, at No. 3, the circus and suffering come together with Paul Pfeiffer. This installation, like Conner’s, uses the ready-made and the medium of film. In Pfieffer’s case, though, the magic comes from what he has erased, rather than what he has composed. Popular culture and its spectacles are again central to the work; Pfeiffer uses footage of sporting events, rather than cinema, to skewer the contemporary sensibility. In Fragment of a Crucifixion (after Francis Bacon), 1999, a basketball star storms the court, hands flexed and open by his sides as he walks back and forth in triumph, cheering. He walks back, and forth. Back, and forth, forever. The video projection is looped, cutting at points where a move is almost believable rather than a jolt; watching the young man repeat this pinnacle of pride again and again quickly becomes sinister. He reminds me of a pacing polar bear gone mad in a zoo, and of a peculiar kind of nightmare. Think of Dante’s Inferno, where the gluttons are forced to eat ad infinitum, past the point of their stomachs exploding and mortal expiration. Even the best moment of your life would lose its sparkle if it happened every day, let alone perpetually. ‘Best’ ceases to mean anything, without the peaks and troughs of normal existence to moderate it.

There’s more; although the subject of the video is recognisably a basketball player (I’ve never watched a game in my life, but even I know the shorts and vest silhouette) all the trappings that would suggest are absent. Pfeiffer has removed the other players, the referee – even the ball. All that remains are the player and the adoring crowd; one cannot exist without the other, and yet their relationship seems to sour – more cannibalism than symbiosis – as I watch the film loop. The piece takes its name from a painting by Francis Bacon; as the fragment of footage loses context through repetition, like saying a word again and again makes you unsure of its meaning, it could come from almost anywhere. The player’s open mouth might signify screaming in pain, anger, or joy. The crowd behind him could be moving in celebration, fury or a bid to tear him to pieces.

Think of Dante’s Inferno, where the gluttons are forced to eat ad infinitum, past the point of their stomachs exploding and mortal expiration. 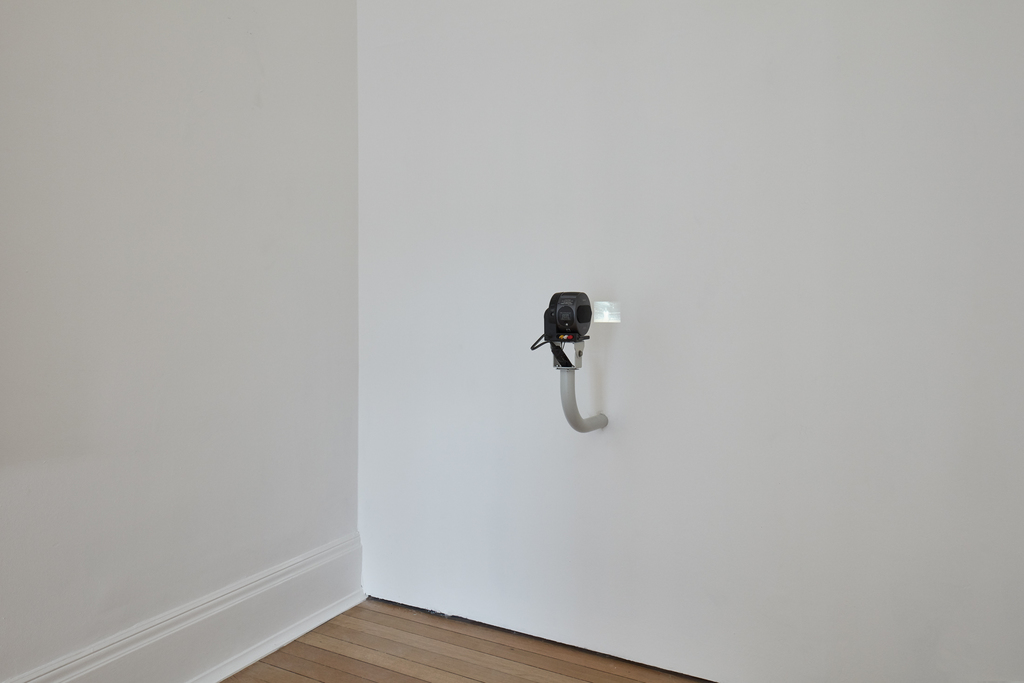 Paul Pfeiffer, Fragment of a Crucifixion (after Francis Bacon), 1999 at Thomas Dane Gallery

Moving into the next room, we slide from basketball to boxing. In the case of this series (Long Count, four videos of Mohammed Ali’s most famous fights displayed on curious and tiny screens, projecting almost a meter from the walls they begin on) Pfeiffer’s conceit from Fragment is inverted. Where before he removed everything but the essentials from a scene, here he absents the natural focal point of the boxers themselves. Produced in the early 2000s, technology was not yet advanced enough to allow this to be executed seamlessly, but the work is none the worse for it. A kind of shadow of two figures, translucent silhouettes, remain, sparring in front of a crowd we can see through them. To remove the subject of the fighters is to render the spectators the focus of the video. Of course, the viewer in the gallery is implicated here – the crowd can’t see us, in much the same way as we can’t see the boxers. We’re left looking at ourselves. 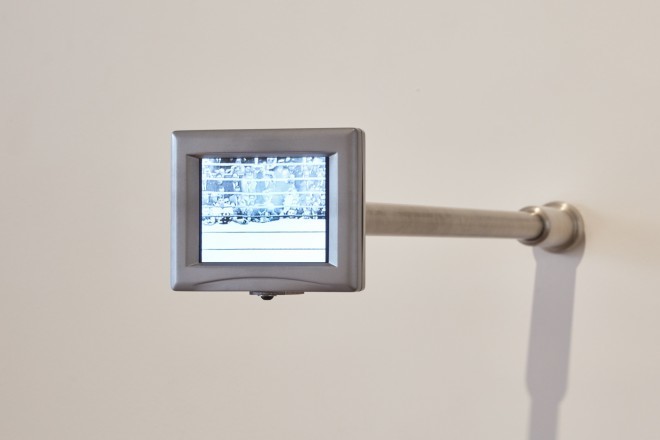 Paul Pfeiffer, Long Count (I shook up the World), 2000 at Thomas Dane Gallery

Pfeiffer has digitally erased the winning party, leaving us to watch as the match’s loser dodges invisible blows, pummelled by unseen hands.

In the final room is Pfeiffer’s most recent series, Caryatids. We’re sticking with boxing, but this work – perhaps the exhibition’s most powerful – explores a combination of the erasures posited in Fragment and Long Count. On the floor are boxy television sets, displaying men in boxing rings; there are, naturally, two in each, but only one to be seen. In each case, Pfeiffer has digitally erased the winning party, leaving us to watch as the match’s loser dodges invisible blows, pummelled by unseen hands. It’s unnerving – partly because the technology has caught up with Pfeiffer’s vision, and there’s virtually no trace of the aggressor except for their effect on the visible body. Caryatids begs many questions. Is this what spectators of boxing watch it for? Has Pfeiffer just removed the middle man to clear the way for us to see someone being brutalised? On the other hand, perhaps he’s confiscated the aspirational element of the sport – the winner – and left us to understand what we’re really cheering for when we celebrate a KO. This is what you like. This was made for you. 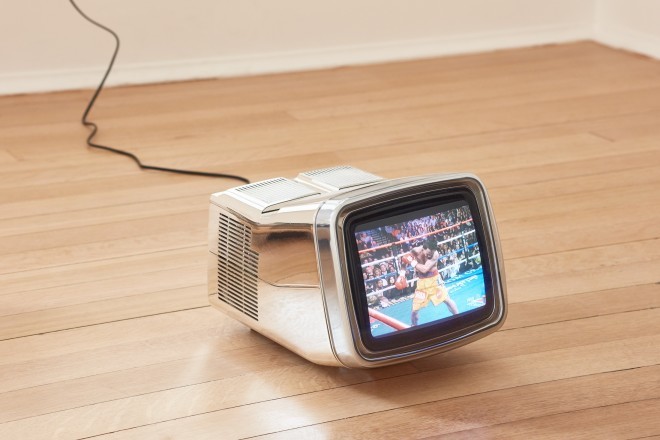 Both exhibitions examine us by examining our visual culture. We are the subjects at Thomas Dane until July 15th, and I’d urge you to look in the mirror.