The Mountainside is Breathing; Summer Breeze at Frith Street

The mountainside is breathing, as the wind sways all the trees at once. You sleep and I’m here/ I don’t know, since when/ I know that I’m drowning/ In the hate I feel/ I almost wake you up, but then/ I think and say no, now, better not./ I look at you abandoned there/ I hate all of you/ That’s how it is. So sings diva Mina over the projection of respiring hillside, sound and image coming together in Jaki Irvine’s ‘Mountain Wind’ at Frith Street’s Soho Square. Summer Breeze, a gallery artist group show on until August 11th, comprises a kind of Frith Street Greatest Hits – many of the names will be familiar to regulars. At Golden Square, we have work from Fiona Banner, Dayanita Singh and Daniel Silver. In this Soho Square space, Cornelia Parker, Tacita Dean, John Riddy and Anna Barriball line up for your delectation. Frith Street curates group exhibitions particularly well, and Summer Breeze is no exception.

There’s a thin line between love and hate, after all, but Irvine’s visual accompaniment to Mina’s haunting vocals lends its monotony, and rhythm, to her subject matter. 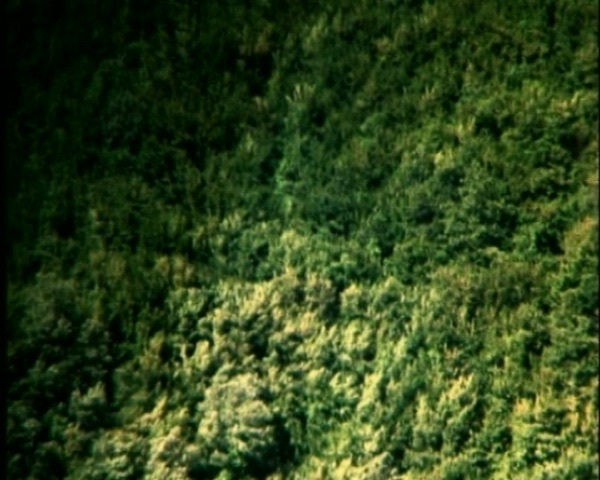 As the greenery oscillates into a kind of hypnotising abstraction, Mina comes to her denoument: So close, so close and what a child you are/ You move and I already know that/ You will sigh and move your head/ And open your fist and in a second or two/ You will open your mouth and/ say my name and/ Here, look now, I’m here. A tale as old as hillsides, swinging between fury and devotion, the singer knows all her resolve will crumble when the song’s subject wakes. There’s a thin line between love and hate, after all, but Irvine’s visual accompaniment to Mina’s haunting vocals lends its monotony, and rhythm, to her subject matter. After all, isn’t she describing the most natural thing in the world? The narrative cycle – he will sleep again, wake again – tracks an emotional state sliding from loathing to romance, (short-lived) independence to co-dependence. Of course, anyone is sure that their particular love story is history’s most tragic or epic, but we know objectively that the same has been experienced by countless others, now and throughout history. ‘Mountain Wind’ captures this duality – the specificity and ubiquity of human experience, transposed onto forest. The wind will never again blow quite the way it does in that film, but it will be similar. In fact, it will seem identical to anyone who didn’t experience it – and so it is with love. 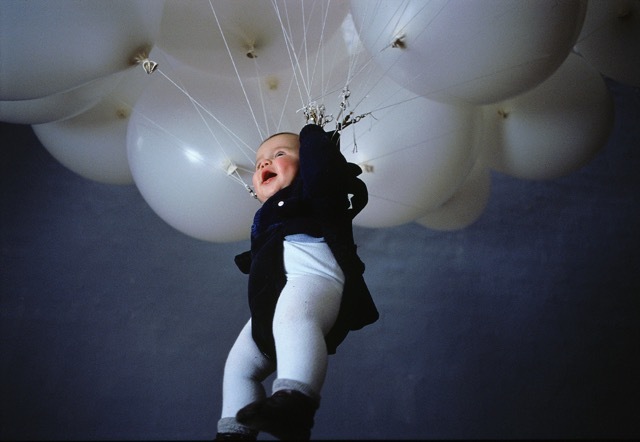 You know what’s more cheerful? ‘Tilt’, by Fiona Tan. It’s a video of a baby, suspended in a harness by myriad white balloons. He’s having a lovely time – the soundtrack sees him gurgling, the visuals closing in on his grinning little face. We’re primed to react to babies in a certain way, programmed to be completely enamoured by their big eyes and tiny feet. Think about it – if we weren’t obliged to adore and protect them, how long would the average parent suffer to keep a screaming, helpless little grub around? Tan’s drawing on this instinctual reaction in her presumed viewer, something deep and primal and happy, and confounding it by inducing a similarly ingrained response – worry. I say ingrained, not inherent, because the baby is thrilled. Adults, after their first blast of ‘Aw!’, will wonder about the infant’s wellbeing. Is he ok? Who’s supervising? Imagining oneself hovering, strapped to a sea of helium balloons, might equally terrify and delight - depending on an individual’s disposition. Whether we love or hate the idea (there’s that dichotomy again!), it’s an alien one. All this adult panicking and analysing, though, is precisely what’s being sought in us. The baby hasn’t learned to be scared. Hell, he doesn’t know what a balloon is. There’s a purity to his joy, experiential and untainted by logic or learned responses to pain and threat. We used to be that way, but we found out about heights, and danger, and falling, and how fragile a body is - we want to enjoy his wonder, but, as adults, we can't. Quite.

The baby hasn’t learned to be scared. Hell, he doesn’t know what a balloon is. 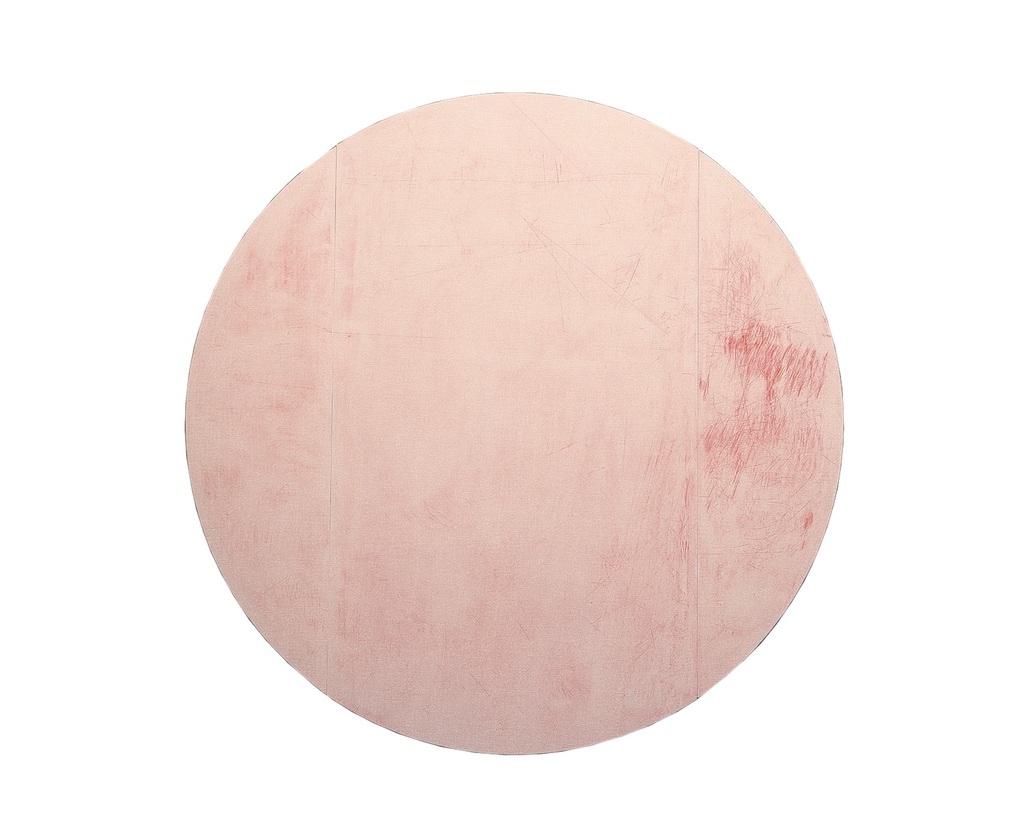 If ‘Mountain Wind’ tackles the notion of time moving in cycles, and ‘Tilt’ engages with temporality as something experiential and precarious, then Anna Barriball’s ‘1972-2001’ is interested in its physical signs. Processes take time, even if just a moment, and this is alluded to explicitly in the piece's title. Barriball has taken a round table top, scratched and scuffed through years of use, painted it red and promptly cleaned it. The pigment has ‘stuck’ to the surface’s imperfections, creating a kind of palimpsest of processes: those applied before Barriball’s intervention, unthinking; those after, tentative. ‘1972-2001’ speaks to the finity and infinity of time, and the permanence of the erasable. What’s done is done, and what we see will depend on everything that has ever happened before. Everything leaves a record.

Downstairs, themes of impermanence and infinity are expounded in John Riddy’s photographs of the sky. We’re looking at something larger than we could ever conceive of, mediated onto a print and framed behind glass. Cornelia Parker’s ‘Inhaled Cliffs’ perform a similarly deft sleight of hand: comprised of an unassuming, neatly folded pile of linen, the piece’s modest appearance belies the grand concept literally woven into it. Parker has starched the sheets with chalk from the White Cliffs of Dover, and the domestic collides with the natural world. There’s not much more personal and intimate than bedding; then again, there’s not much more sublime than a good old fashioned natural wonder. Just as Jaki Irvine coasts between the ubiquitous and the specific, so Parker conspires to wed the universal with the mundane. Time, ever present, is here too. We starch sheets to make them clean and ready to dirty. The cycles of housework, an historically gendered sphere of labour remarked upon for its endless monotony, have been compared to the menstrual cycles of the women carrying it out. It’s a useful way of naturalising oppression – they love it, their wombs do it anyway. To see the sheets here, in a gallery, upon a plinth and behind glass, is a disconcerting sight. The presentation of ‘Inhaled Cliffs’ elevates the everyday to the sacred, preserved as the sheets are like a saint’s vestiti. In Summer Breeze at Frith Street Gallery, the juxtaposition of and negotiation between huge and tiny, natural and manmade, idiosyncracy and truism, reminds us of the power of the lens. It all depends on where you’re standing. 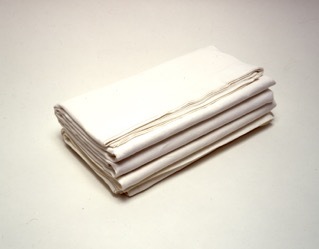