The Girl with the Dog

Milton Avery was a transitional figure in the history of American art. Born in 1885, his art developed out of Impressionism, and dying in 1965, his work bled into the beginnings of Abstract Expressionism. His paintings are characterised by abstraction, but always empirically grounded in his present reality. Given the expanse of Avery’s career, and an eye-watering output of oils, it is surprising that the current retrospective of his works at the Royal Academy of Arts is the first in Europe. Even in the US, the last major Avery exhibition took place four decades ago in 1982, at the Whitney Museum of American Art in New York. 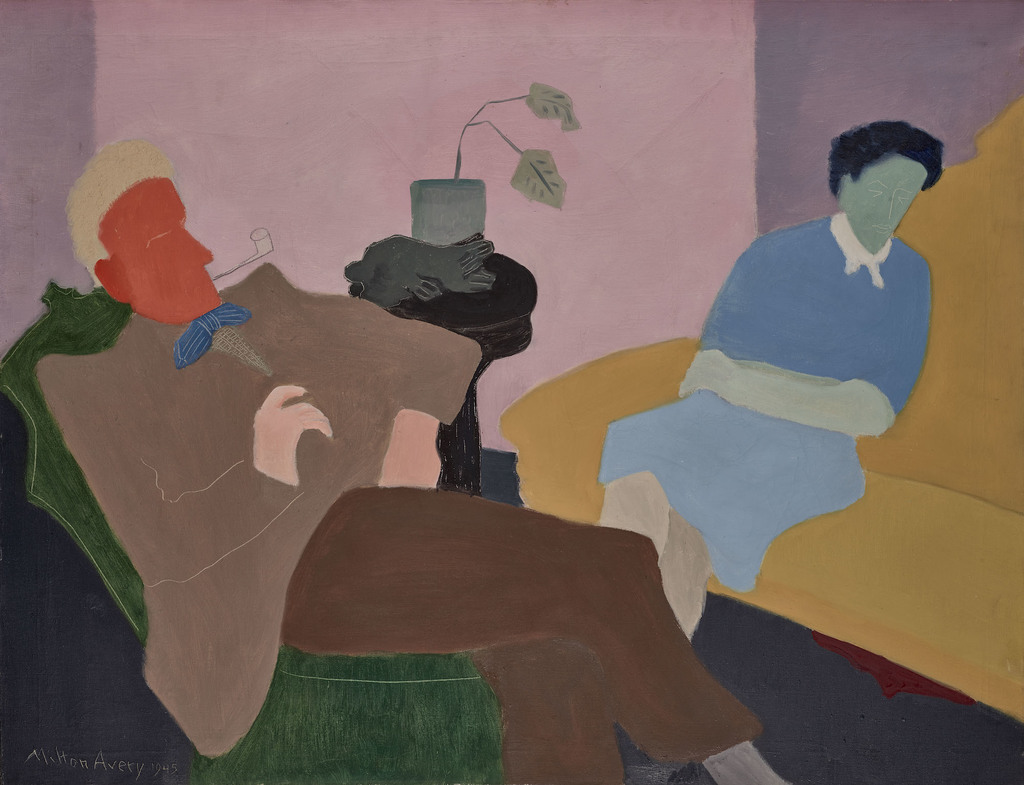 Walking through the galleries of Avery’s paintings, the melting pot of his influences and his later influence are apparent. The blending of colours and lines make evident the comparison of his work to Henri Matisse, a staple of criticism of Avery since the 1940s, where natural landscapes and figures are simplified to their fluid visual elements. Moving towards the end of Avery’s career, to his blocked washes of colour seen in paintings like Boathouse by the Sea (1959), it’s clear why his work resonated with Mark Rothko, who in a memorial address for Avery at the New York Society for Ethical Culture on 7 January 1964 reflected: ‘There have been others in our generation who have celebrated the world around them, but none with that inevitability where the poetry penetrated every pore of the canvas to the very last touch of the brush.’ 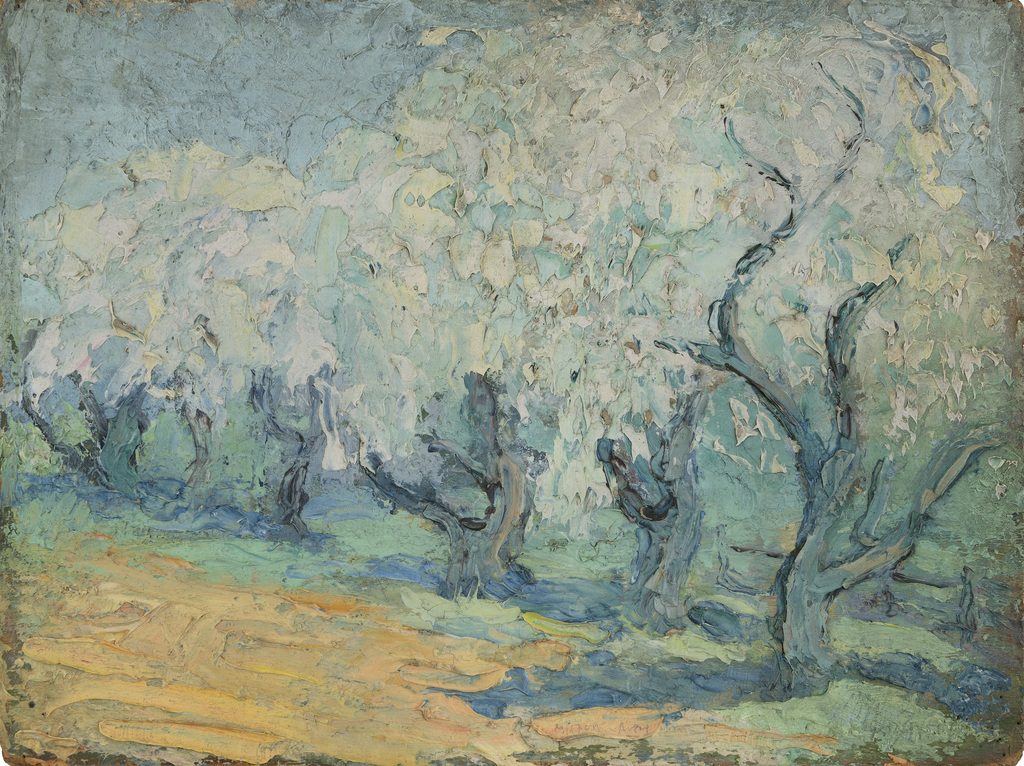 Given the way that Avery feels blended between two periods of American art, it is his middle-period that feels the most distinctive. Where it might be possible to say that Avery’s early works are secondary to Impressionists like John Henry Twachtman or Mary Cassat, and his late style was perfected by other colour field painters like Rothko, Matisse, or Barnett Newman, there is something unique about Avery’s 1940s portraits. Portraiture became a key part of Avery’s output when he was living in New York during the 1930s, drawing fellow artists during informal sketch classes from 1938. He painted various people he met around the city, such as a barber in Barbershop (1936), but also himself, his wife Sally Michel Avery, and his daughter March Avery. 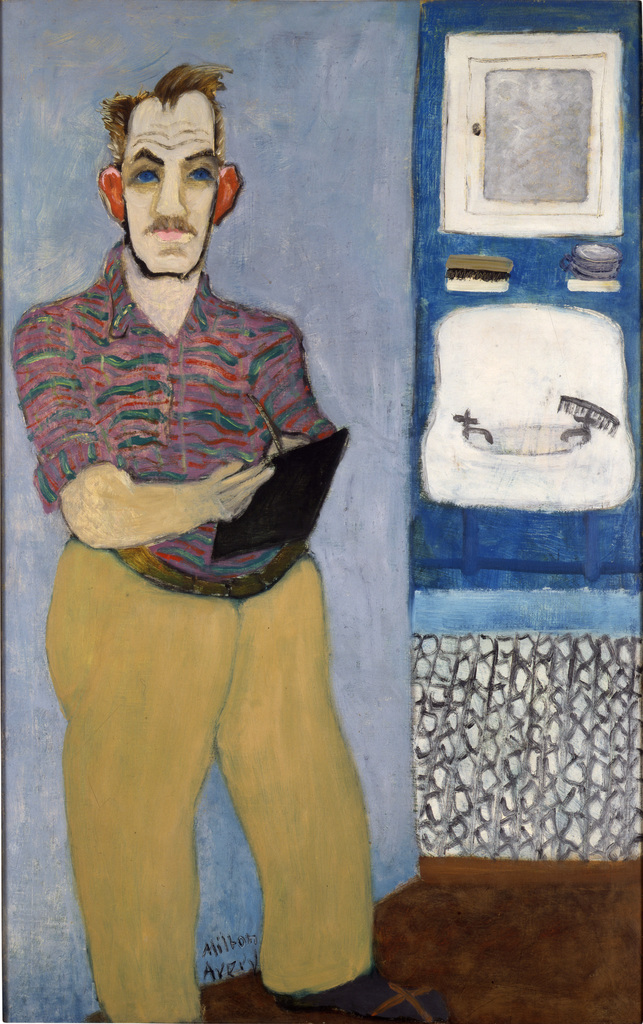 The style changed - Avery abandoned the Impressionist brushwork and surfaces of his earlier landscapes, the blue-green palette of New England, and began bringing out darker hues with little pops of colour bursting through the canvas. He used his painterly blocking to define his layers and create depth within his images. The success of this change led to an extraordinary volume of production, producing 53 oils in 1943, over 100 in 1944, and over 70 in 1945, along with hundreds of sketches and watercolours. The period of bountiful creativity ended in 1949 when Avery suffered a heart attack, which Sally Michel Avery observed as bringing out the greater simplification of landscapes and concentration on the essentials which defined his late period. 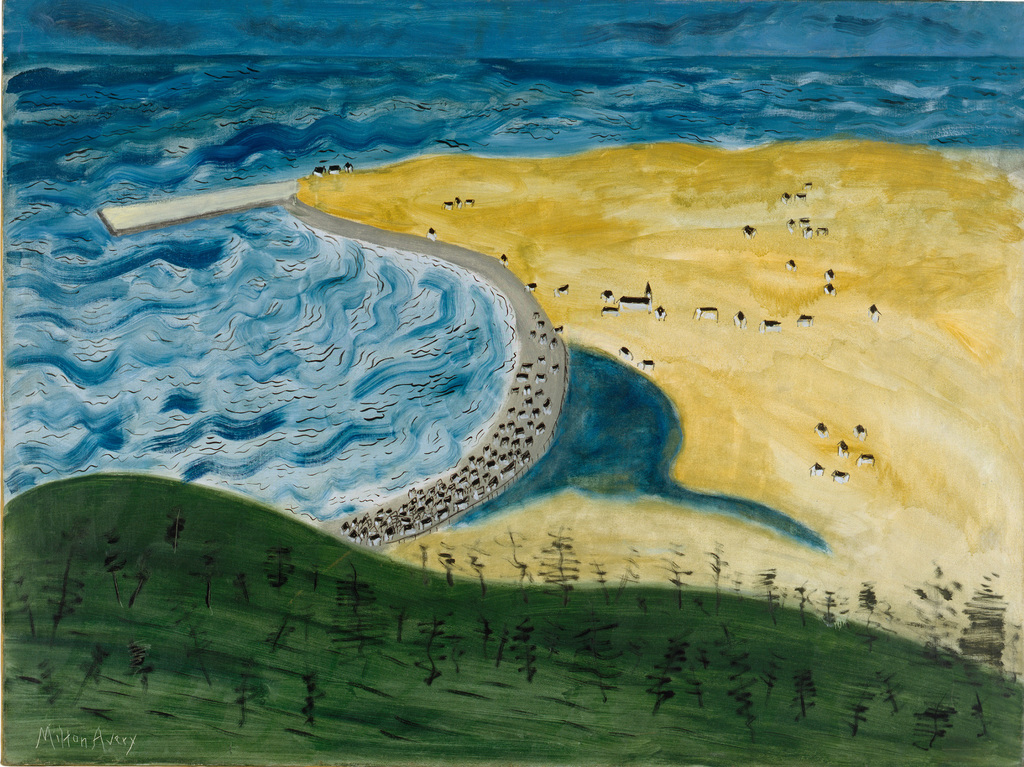 "an unnerving absence of readability"

One of the oil paintings from 1944, the most productive year of Milton Avery’s life, stands out from the rest. Titled Seated Girl with Dog, the painting is a portrait of March Avery holding the family’s black cocker spaniel named Picasso. It represents a progression in abstraction of Avery’s perspective of his daughter. Earlier in 1944 he had painted March in Babushka, in which the background behind March has disappeared, and the tied edges of her headscarf are blended into the colours of the human figure herself. The scratched figures of her face have vanished altogether in Seated Girl with Dog, leaving her faceless only defined by the dark lilac side of her blank visage cast in shadow. She stares straight at us without eyes, an unnerving absence of readability that suggests a growing disconnect between father and daughter. 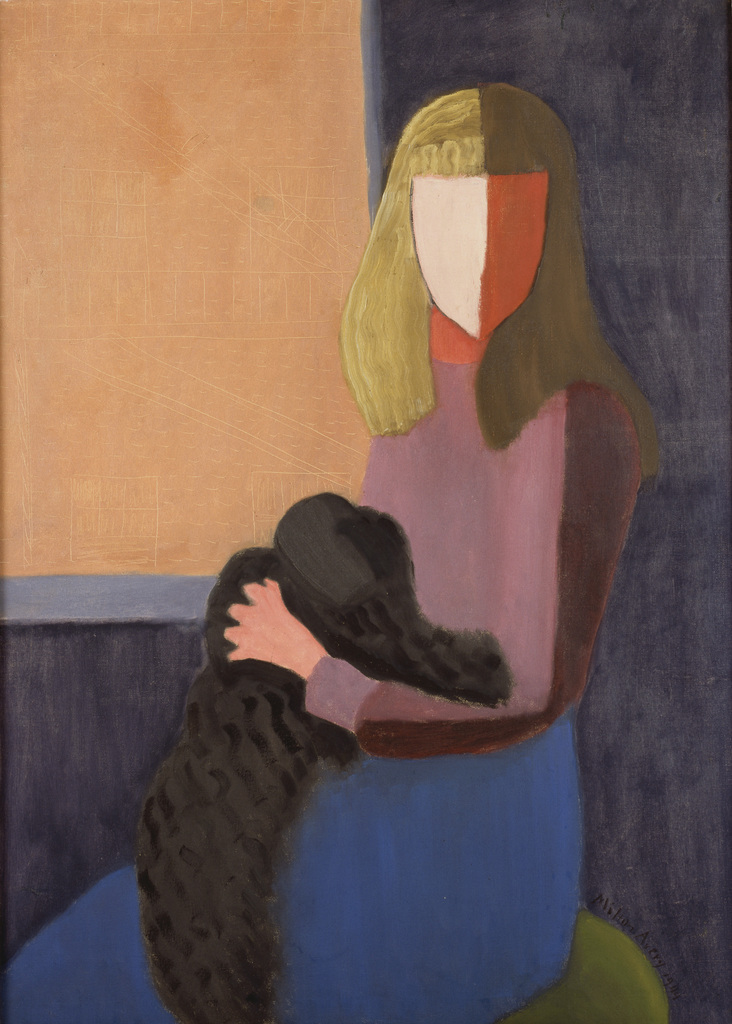 The dog Picasso is similarly obscure, a flattened mass of black with hair defined only through Avery’s waving brushwork. For the background, there is a golden open window shining light onto March against the deep purple walls. Avery has used sgraffito, adding detail by scratching into the wet paint, on the window to define the cityscape outside, a metal fire escape and block brickwork completely washed out by the sun. The urbanity is overshadowed by the living figures in the foreground, but their extreme abstraction renders them indecipherable, even haunting. March Avery’s sandy, swirling hair and broad fringe add to the mystery, a facade not dissimilar to that of Sylvia Plath in this period. She is young and impressionable, the life and career that will define her practically a blank canvas. 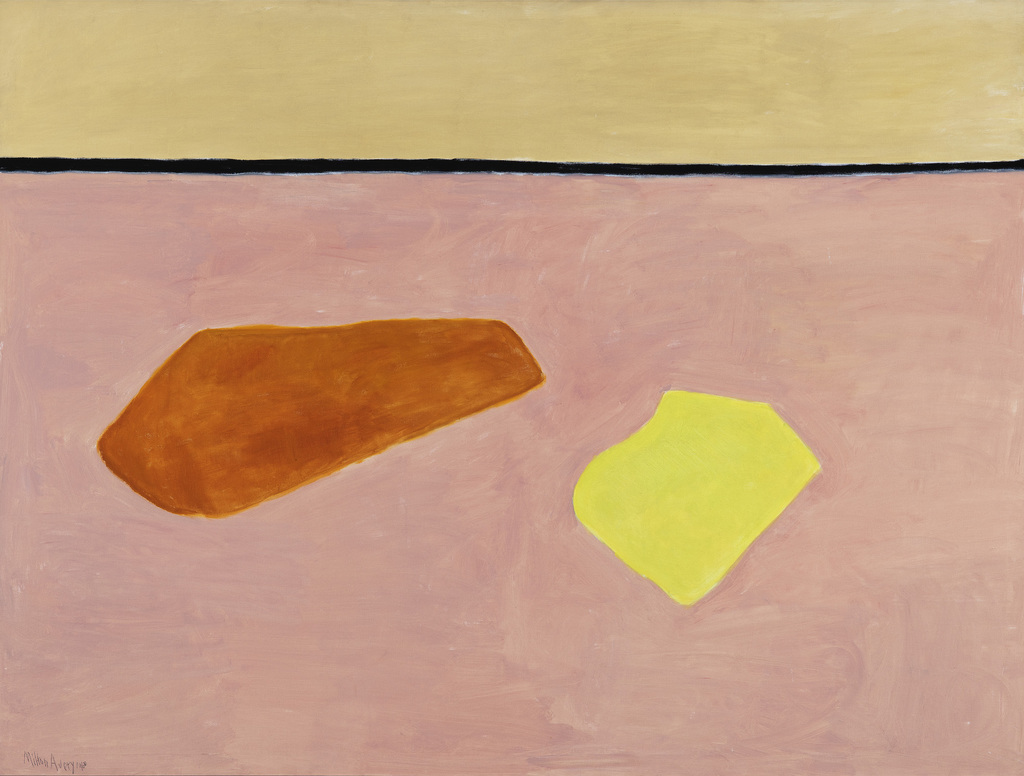 Immersed in art, March Avery was bound to become an artist herself. Her mother, Sally Michel Avery, was also a painter, although she has never been exhibited outside of the US. Yet a solo exhibition of March Avery’s works was displayed in September at Waddington Custot, but five minutes away from her father’s retrospective at the Royal Academy. Her education came from observing her parents, her output defined by similarly bright and colourful scenes of domestic life not unlike the portraits Milton Avery created of March. Her portraits are more clearly defined than the 1940s portraiture of her father, such as the human-and-animal painting Sean & Rumple (1978) where both man and cat are more readily identifiable than March Avery and Picasso are in Seated Girl with Dog. 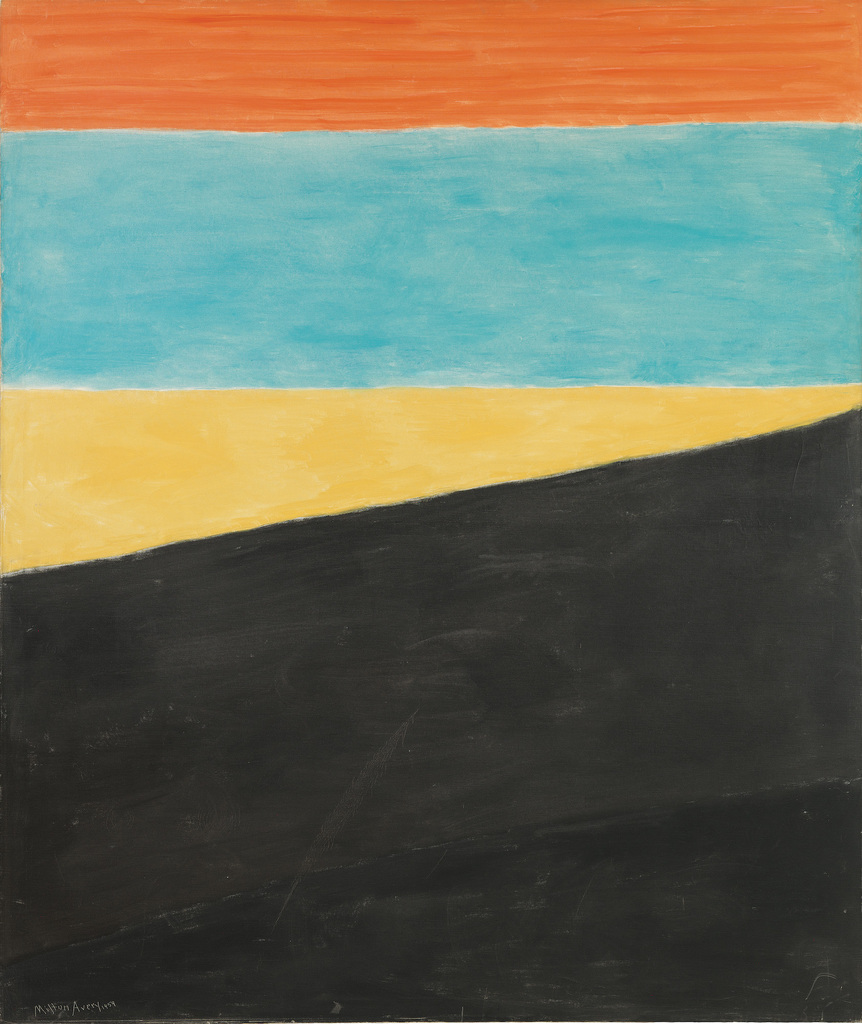 To her, there was no difference between a person and an artist: ‘I didn’t know anybody who wasn’t an artist. I thought everybody was an artist.’ The room in which Milton Avery had painted her for Seated Girl with Dog was both studio and living room, the easels cast aside in the evening and brought back out the next day. The lines between art and life clearly blended for the Averys, just as the blocks of colour seep into each other at the seams. Their work invites us into the home but holds us at a distance, standing on the cusp between impressions and expressions, just as Milton Avery did.