The Clock: Christian Marclay at Tate

I’ve seen only 1/48th of Christian Marclay’s cult endeavour: a 24-hour epic assembled from god-knows-how-many clips from film and television, each featuring a reference to time and functioning together as a timepiece, The Clock is a clock. Some snippets show a digital watch or ticking hands; for others, a line of dialogue situates the segment’s particular time stamp: ‘it’s ten minutes to three’ is announced aloud by a character from the Night of the Living Dead at 2:50. Sometimes, a memento mori is enough to imply time’s passage; flowers wilting, suns setting. Hands, ticking. 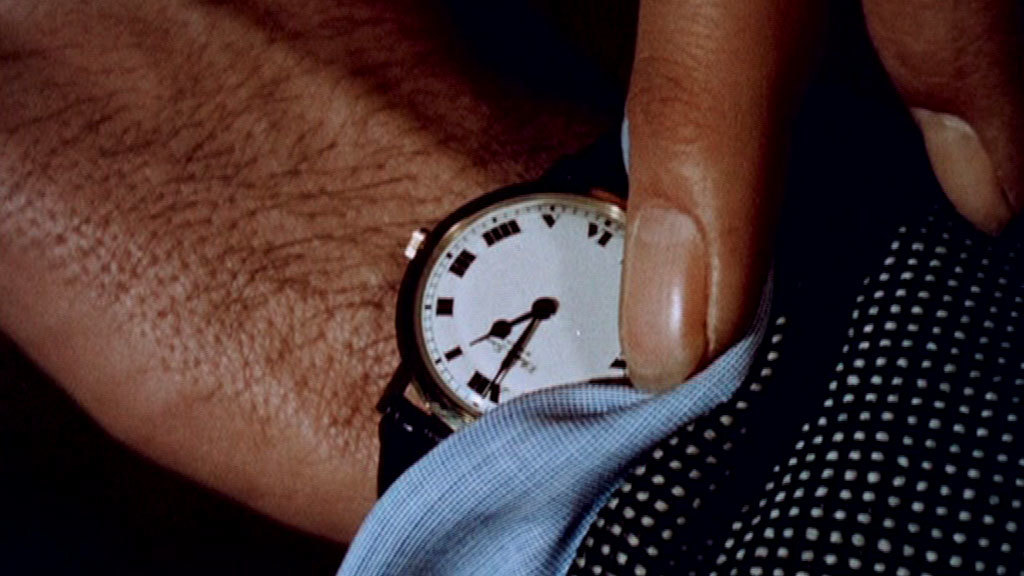 Wrist watch after microwave timer after grandfather clock brings us back, again and again, to the eternal present moment – but the feeling is one of companionable trooping rather than a lonely hurtling towards oblivion. The moment is now, and then. It’s now! And then! And past! And present! Check your watch – you’re in a film!

It is 10:45am for me, and for you, and for Elizabeth Bennet greeting Mr Darcy, for an old-timey couple waking bleary and now it’s 10:46 for a woman, somewhere, drying the condensation on her mirror with a hairdryer and 10:47 for someone leaning out of a car window and arranging to wait for her lover an hour, then another hour and then another. It’s 10:48 for me, and for you, and for a man trapped in a car sinking to the bottom of a river as a bomb ticks towards detonating. But! It never will go off, because now it’s 10:49 for you and for me and the pretty French school teacher, who is late. For what? As the audience of the film from which her scene is lifted, we would come to know; the Clock, though, is one film and thousands at once, and its viewers will never learn where she hurries off to. It’s much the same experience as seeing someone push through a crowd to catch a bus, and momentarily allowing yourself to wonder where they need to be, and why. Although it could stand in for a pretty comprehensive history of film, The Clock is much more akin to real life than Hollywood drama. Again and again, we’re treated to all the build-up and none of the resolution: an hypnotic stasis, precipice and base camp at once.

It took 3 years and 6 assistants besides Marclay to make The Clock: a lot of work, for something very few people will ever see in its entirety. 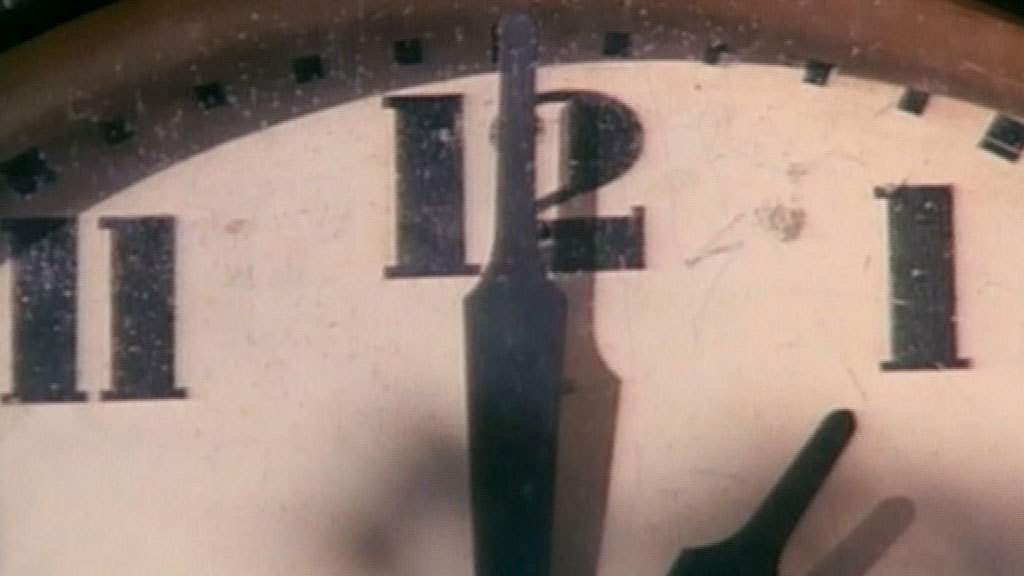 Soundtracks bleed between clips, which is sometimes unsettling – often, funny. At 10:55, a host of midwives inexplicably waltz new-born babies down the hall of a maternity ward. Their cheerful babbling follows us into The Clock’s next scene, in which a woman in black and white is pulling herself out of a bath tub. She’s shouting arrangements to a voice in the next room, and straining to be heard above the cooing hangover. Razor sharp. It’s moments like this one which turn your thoughts to the unimaginable project behind the finished product: the hours of watching films, compiling and assembling clips – let alone the task of editing them into a cohesive (and functional) 24-hour epic. It took 3 years and 6 assistants besides Marclay to make The Clock: a lot of work, for something very few people will ever see in its entirety. 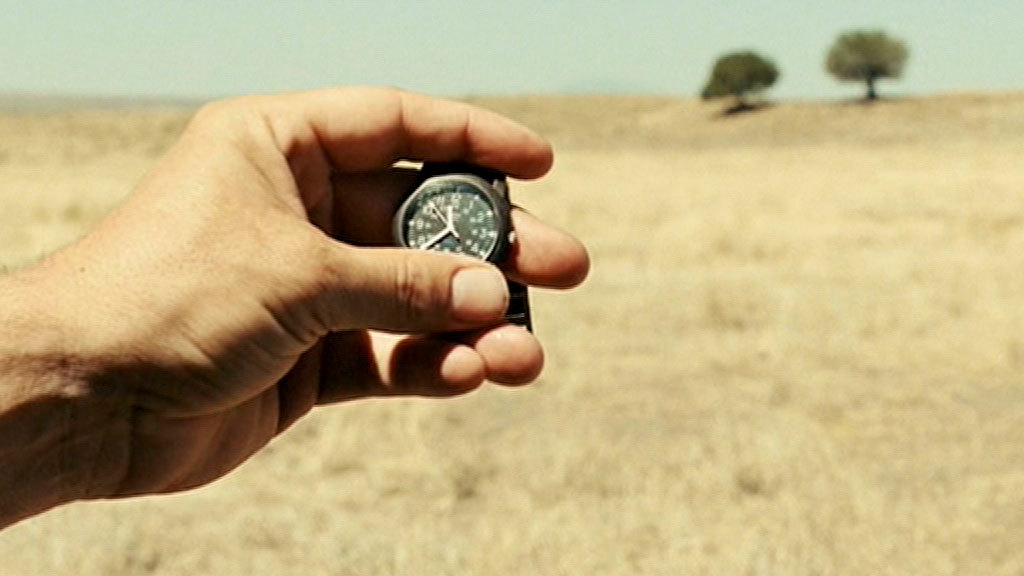 We look at clocks constantly. In 2018, as in 2010 when The Clock was first released, we are keeping time in the corner of our laptop screens, on tube platform displays and bus stops, email time stamps and electronic calendars. We are saturated with seconds, drowning in minutes and sprinting between hours; but time, as displayed in increments by ticking hands and digits flicking forwards, is a man-made phenomenon. We’re hoisted on our own petard, running from one arbitrary fragment to another, measuring as though to count is to control. The Clock laughs at, and sympathises with, this collective obsession of ours. 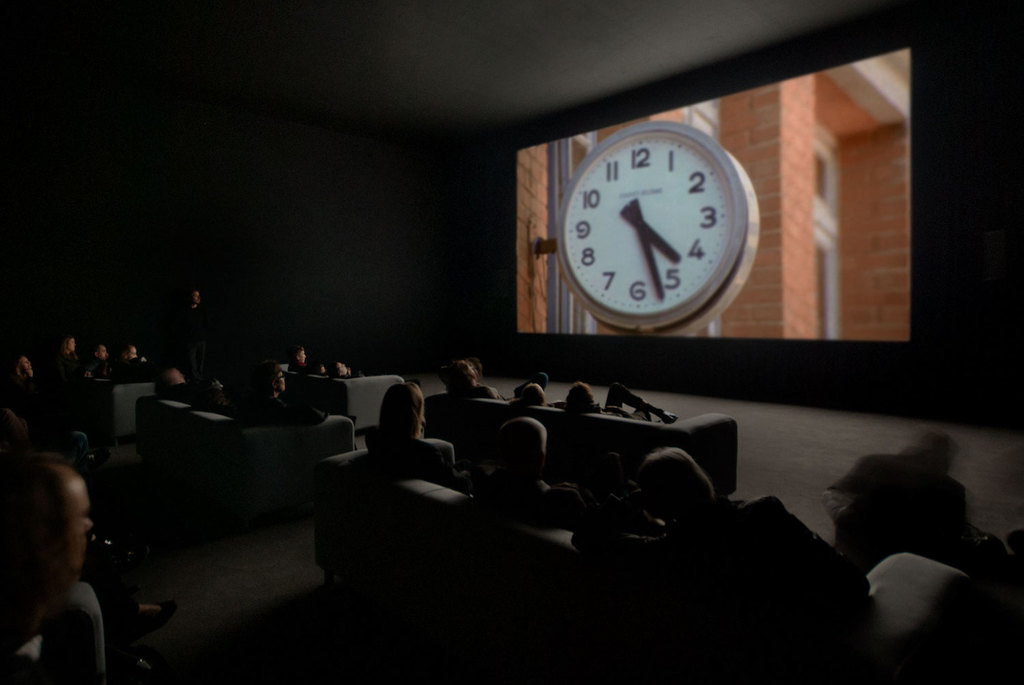 Generally speaking, clocks and the hours they measure enter stories to symbolise something waited for, anticipated, either arriving or not. As 11 o’clock approaches for me and for you, men, women and children scurry to make appointments and finish tasks. A prim school master alerts a student taking a test: “Wilson. There are nine and half minutes remaining until 11.” At 10:54, for me and for you, a man runs into an apartment in a dressing gown, sees the display on the microwave and exclaims: “Oh, fuck!”. Finally – and the tension in the room of viewers has risen on command, so receptive are we to movie magic – the cars for a race are assembled on the track. “The starters flag is going up! It’ll start on the stroke of 11”, and it does, and Harry Potter is worried he’s missed his train to Hogwarts, and bells toll and alarms chime in a hundred rooms in cinema and across the globe. 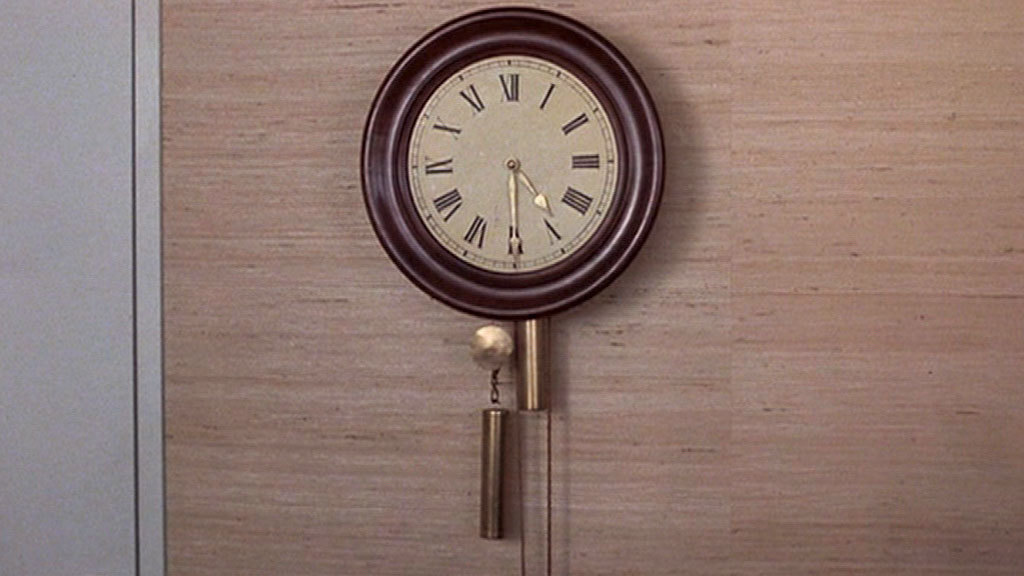 There aren’t many spaces, in a world obsessed with status, which flatten societal differences. Those which exist, where we gather or through which we pass – train stations, doctor’s waiting rooms, bars – feature again and again in The Clock, which itself embodies the greatest leveller of all. However fevered your dash to a meeting with five minutes to spare and 6 stops on the bus to go, however deep your sorrow as the plane which will take your loved one far away prepares to take off as scheduled, know that a million million things are happening at the same time precisely. Think how many will unfold in the next minute. We are all subject to time: passing us by, running out, aligning perfectly.

The Clock is a mixture of the banal and the climactic, flicking between high drama and scene-building in its collage. Whilst there’s no overarching narrative, per se, the characters on screen largely act in sync: after midnight, they go to bars. In the early hours, most are asleep, or dreaming. At around 7am, they – we – wake up, and at 9ish we eat breakfast. Rush hour – between 4 and 5pm – sees most of us in transit. Each clip has its own unique history and arc, stretching behind and beyond the snippet we’re privy to, and falls in step with a wider narrative. The Clock is a cinematic incarnation of that adolescent epiphany: every single person has their own before and after. We inveigle ourselves into many stories over the course of a lifetime, to varying degrees of intimacy – but the vast majority will remain at once unknown to us and yet surprisingly familiar, if only they were iterated.

The Clock is a cinematic incarnation of that adolescent epiphany: every single person has their own before and after. 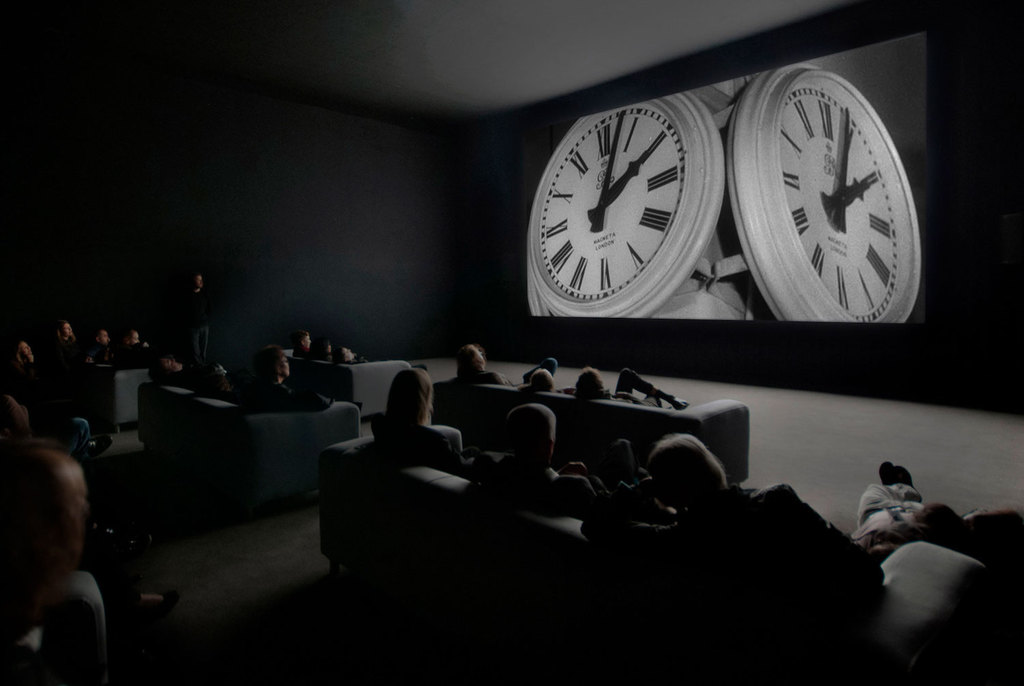 Most lives, by definition, are average. Most people are ordinary, and so they like to watch films about the extraordinary, populated with characters who are aspirational and relatable both. If time is a gesture of ours to impose a kind of order on chaos, it’s one made with the same impulse that carves stories out of the shapeless rock of personal history, on paper or screen. Movies are stories we collectively consider worth telling, and it is in their telling and retelling that they become worthy in the first place. The same blueprint – western, thriller, bildungsroman – is trotted out again and again, not exhausting but rather cementing the importance of its tropes through repetition until they spill into the lives (ours) on which they were based in the first place.

The Clock closes this circle. It’s a delicious exercise in narcissism to project yourself into a cinematic epic; to identify with a hero, and see him vindicated; to get the girl; to win the war. On a smaller scale, then, there’s a glimmer of glamour in seeing a film noir heroine glance at a clock, and checking the time on your phone to find they align. The Clock sets up this satisfying equivalence, again and again, in a process which comes to feel like a self-fulfilling prophecy: in real life, narratives only emerge in retrospect. They’re imposed with the gift of hindsight and in the spirit of the false determinism inherent in cinema or any tale telling. Dip into a moment, cut away, and check your watch – you’re in a film! It’s time! 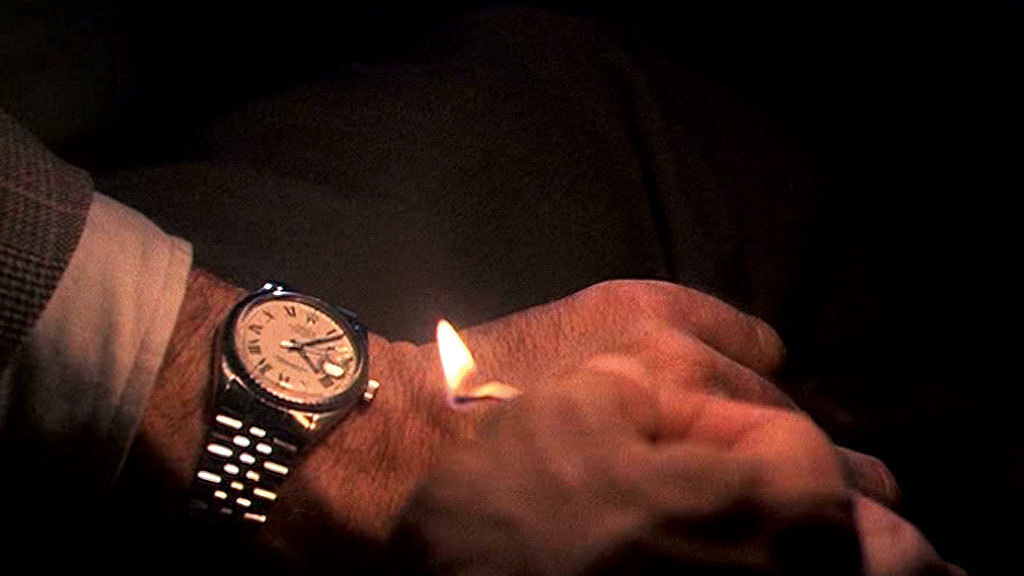