The Charity Shop in the Department Store

There’s a blouse for £3,000. Here’s one for £3. A couple of days ago, Miranda July opened her latest art project – an interfaith charity shop, nestled in the luxury of Selfridges’ third floor women’s wear department. While money and art go together too often, commerce itself as art is certainly an intriguing formulation; then again, July’s known for her interdisciplinary approach. As well as producing two feature films and a debut novel to date, she’s also offered the world an app – ‘Somebody’, which facilitates the delivery of a painful message in person, through a stranger – and ‘Learning to Love You More’, a crowdsourced art project in the form of a website consisting of the public’s collected responses to a series of prompts, acquired by SFMOMA in 2010.

At a moment when global relations are tense, and religion is as much a point of discord as ever, the collaboration between four major religious charities is an exercise in harmonious cooperation in pursuit of a shared goal. 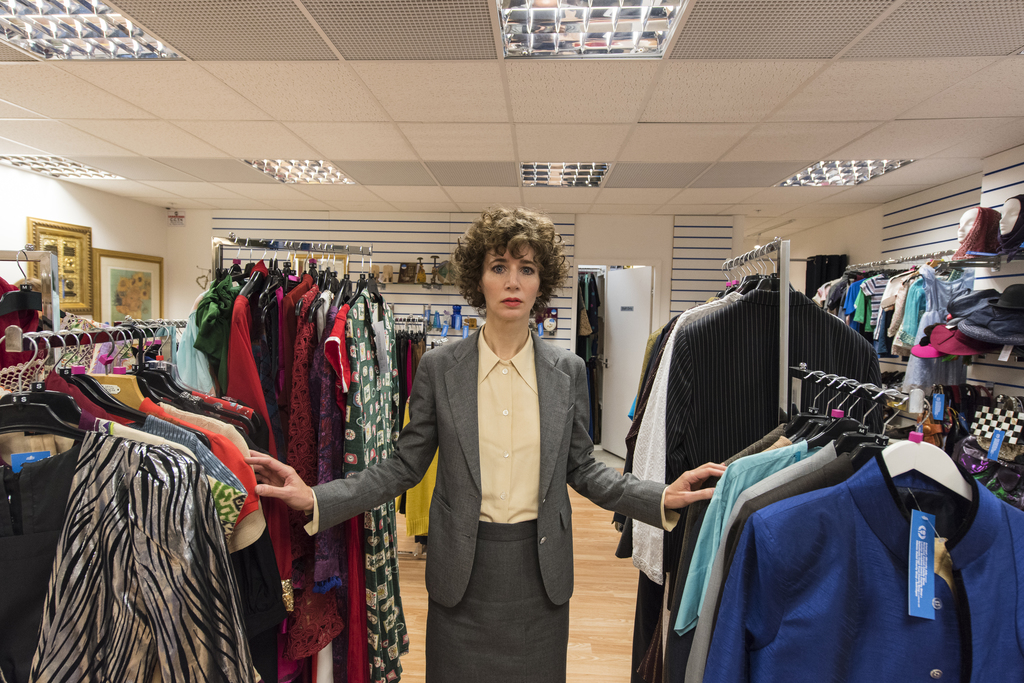 July’s newest work is made in collaboration with Artangel and four charities (The London Buddhist Centre, the Norwood Jewish charity, Spitalfields Crypt Trust and Islamic Relief), stocked with their donations and staffed by their volunteers. Although the champagne and canapés consumed by the art world’s great and good at the opening set a strange foil for the familiar shabbiness of a shop floor which wouldn’t look out of place on any British high street, it’s precisely this stark contrast which lends July’s space its emotional clout. 10 feet away from a tattered leather jacket tagged £8, a Coach bomber selling for £1595 seems (even more) eye-wateringly vulgar, especially considering that the profits from the latter’s sale will go into nothing more worthy than a designer’s pocket rather than, say, victims of homelessness. 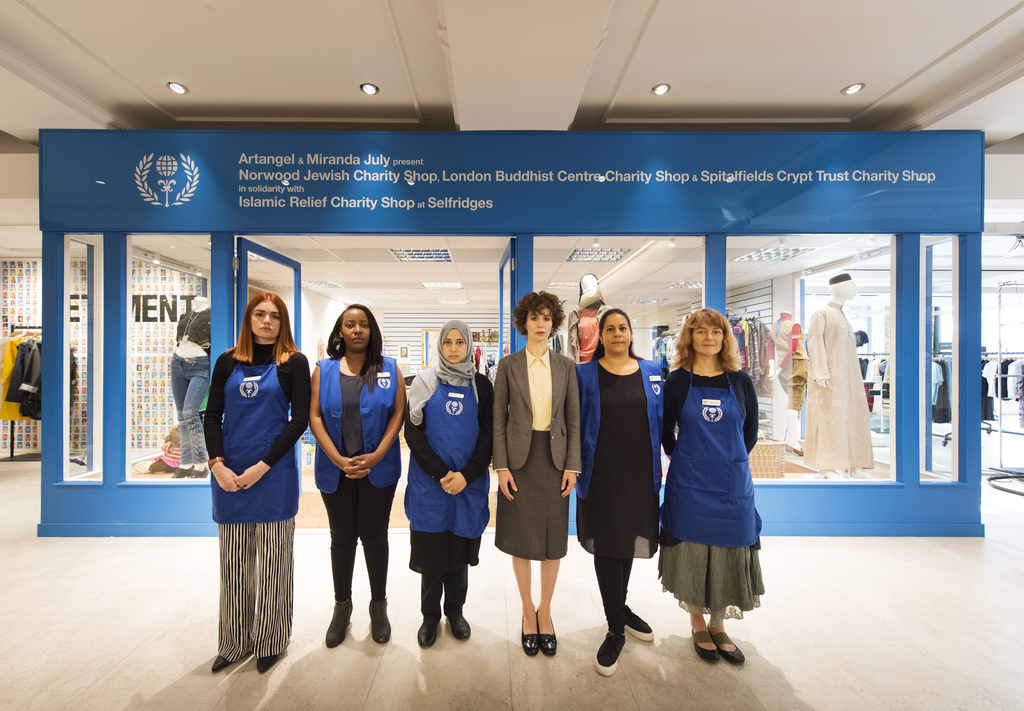 The project’s setting has further implications, when you start to think about the kind of people who normally swan around in it. Frankly, they are not the demographic for whom charity-shop-shopping is a necessity rather than an exercise in self-congratulation. Nonetheless, it seems important to July that the 1% are confronted with the simulacrum of what they might never engage with – bargain bins and racks of pre-loved (and pre-stained) nightdresses and formal shirts – if left to their own devices. The multi-faith backing of the retail space, too, feels timely. At a moment when global relations are tense, and religion is as much a point of discord as ever, the collaboration between four major religious charities is an exercise in harmonious cooperation in pursuit of a shared goal. 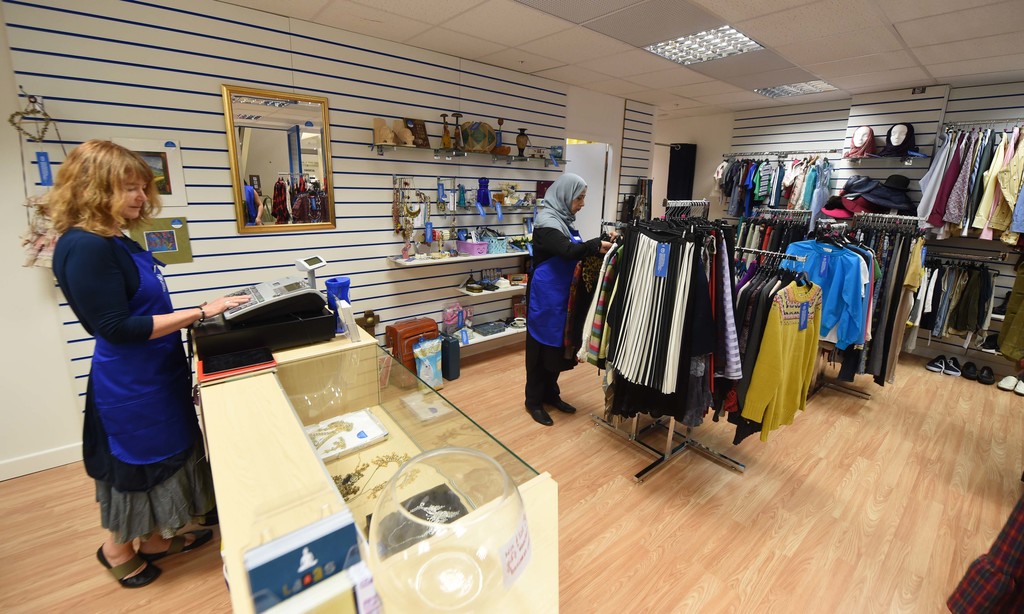 There’s a pleasing simplicity, both of concept and execution, behind July’s newest work; she hasn’t set an ethical trip wire at the project’s benevolent threshold. Her charity shop is precisely what it looks like, and the project is undertaken in good faith, with an earnest desire to help people in need. The purity of conceit is a little disarming; although there’s plenty to say about the ready-made (doubly relevant, in both the project’s form and its contents) and the calling of everyday experiences into the realm of ‘Art’, a shop is a shop is a shop. Of course, the humdrum atmosphere of a ‘normal’ charity shop is far from the glamour of a Bond Street private view – except here, the charity shop is the Bond Street private view. From a conceptual stance, July’s project raises questions about the category of art itself. What’s to stop me strolling into Age UK on Kentish Town Road and calling the venture an ‘immersive performance’ or ‘experiential project’? And who’s to say I shouldn’t?

What’s to stop me strolling into Age UK on Kentish Town Road and calling the venture an ‘immersive performance’ or ‘experiential project’? And who’s to say I shouldn’t? 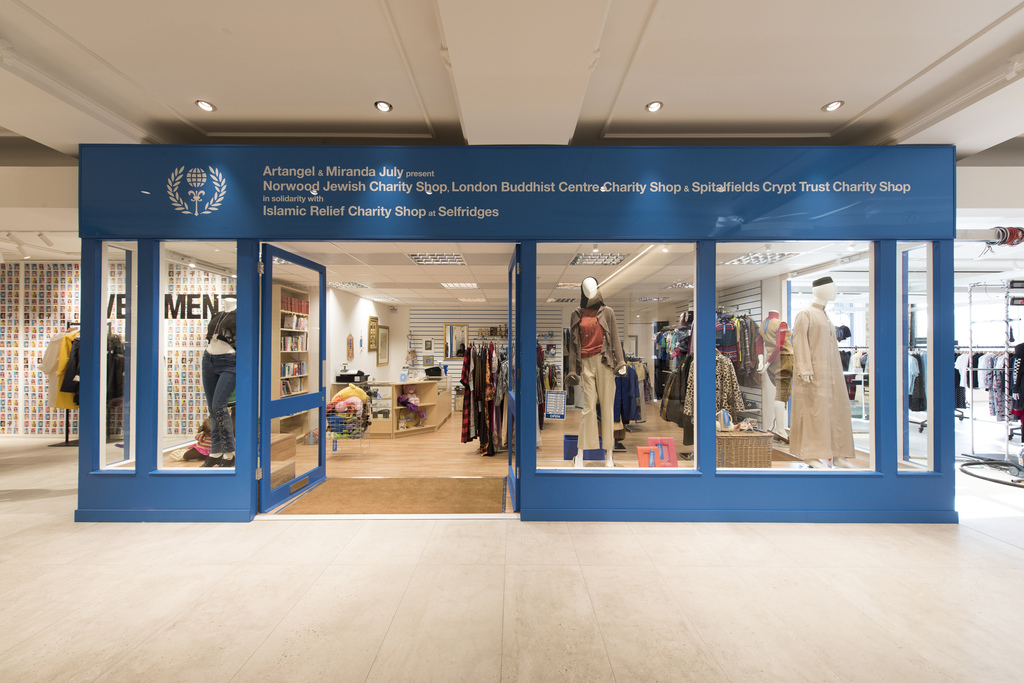 “What’s nice” says July, “is that it’s inherently participatory.” What’s also nice, I’d say, is the inherited participation of all the past owners in the project: friendly ghosts of birthday parties and School Runs Past fill the shop. It’s not just the visitors between now and October 22nd, when the doors will close, who are part of the piece; after all, the items wouldn’t have been donated if they didn’t already have a story of their own.