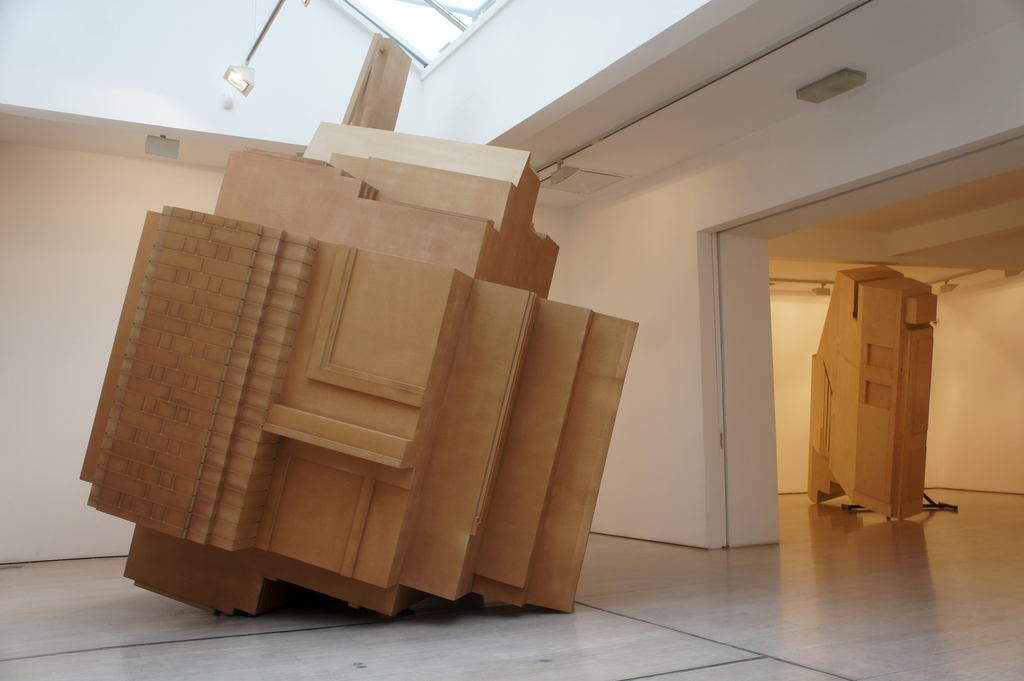 Heading to Richard Wilson’s talk at Annely Juda earlier this month, I was intrigued to see how his work would fit into their top floor gallery space. Known for his large-scale architectural interventions, such as the iconic ‘Turning the Place Over’ in Liverpool which occupied an entire five-storey office building in 2008-2009, would it feel like too much of a squeeze?

The puzzle at Annely Juda is how Wilson installed his huge sculptures, and he’s not telling… Instead, he invites us to consider how a shape can be transported by its surroundings, ‘rather like a ship in a bottle’. 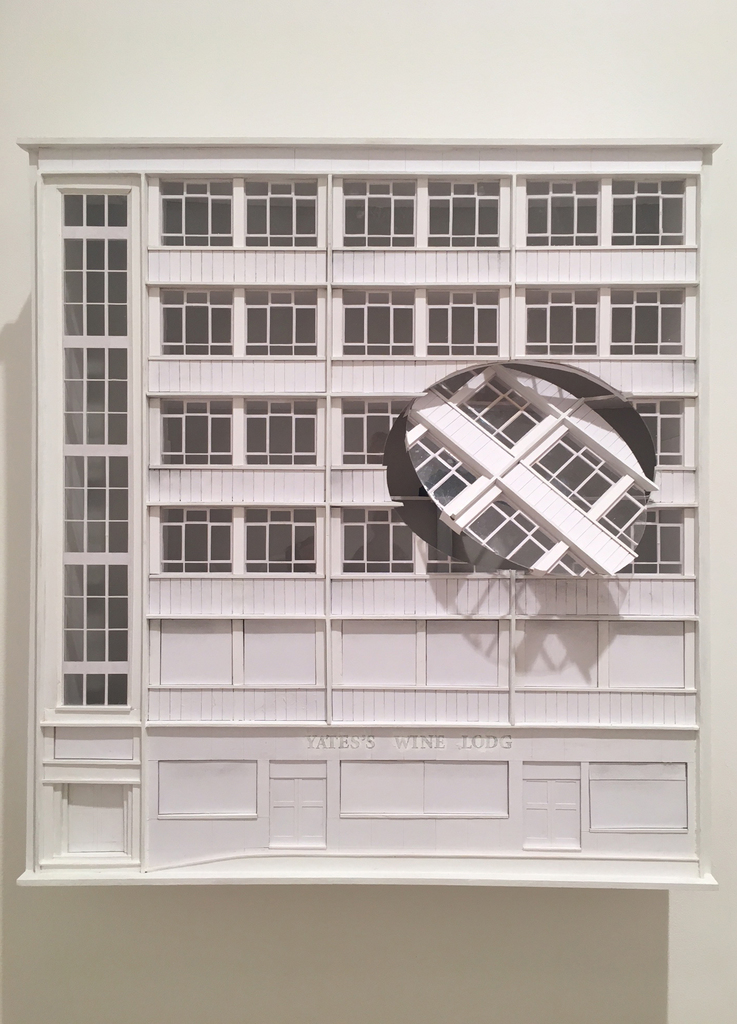 His approach to buildings and negative space has captivated and fascinated audiences ever since he installed 20:50 at the Saatchi Gallery in 1987 (a new installation of 20:50 is currently on display at their Gallery 13). The puzzle at Annely Juda is how Wilson installed his huge sculptures, and he’s not telling… Instead, he invites us to consider how a shape can be transported by its surroundings, ‘rather like a ship in a bottle’. He points to ‘Space Between the Landing and Gallery’, which creeps beneath a ceiling beam, missing it by a few millimeters and looking as if it is about to disappear through the roof. This domestic space was created from Wilson’s home in Rotherhithe, while ‘Block of Dering’ is a slice of the gallery entrance, touching the banister, door and window and giving us clues as to the negative spaces. Each sculpture is accompanied by two working drawings, ‘to try to tell you what’s going on.’ 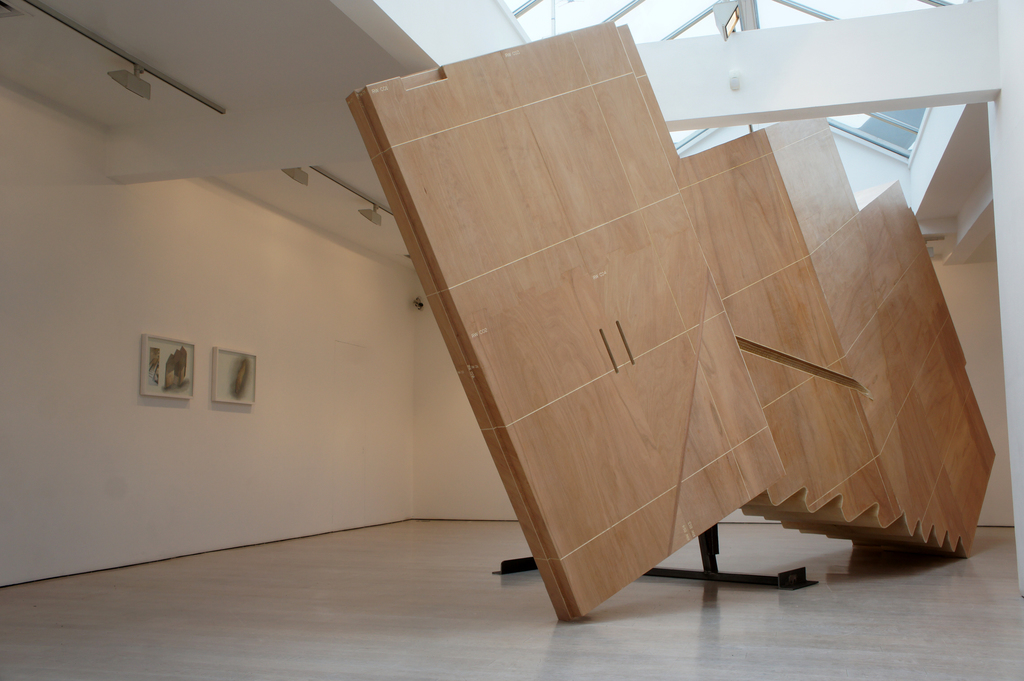 Domestic life is frequently a source of inspiration, explains Richard, describing how half an hour of chopping potatoes, or playing around with six pieces of paper to create eleven different origami cubes, can lead to new work. ‘We plotted the fall of a jug,’ explained Richard about a piece he created for Ikon 50 and Plinth, ‘Still Life Jug,’ because he was fascinated by the distance between the upright and the horizontal; by the jug falling off the table and its journey through space. A new departure was to chop up a chest of drawers (inspired by preparing the potatoes), to recreate a precarious high-rise building in ‘Blocka Flats.’ This was intended to act as a bridge between the three big architectural structures in the gallery and the smaller models. ‘Go to Ebay, it’s terrific,’ Richard urges the rather esoteric crowd at Annely Juda. ‘You can find all kinds of furniture.’ 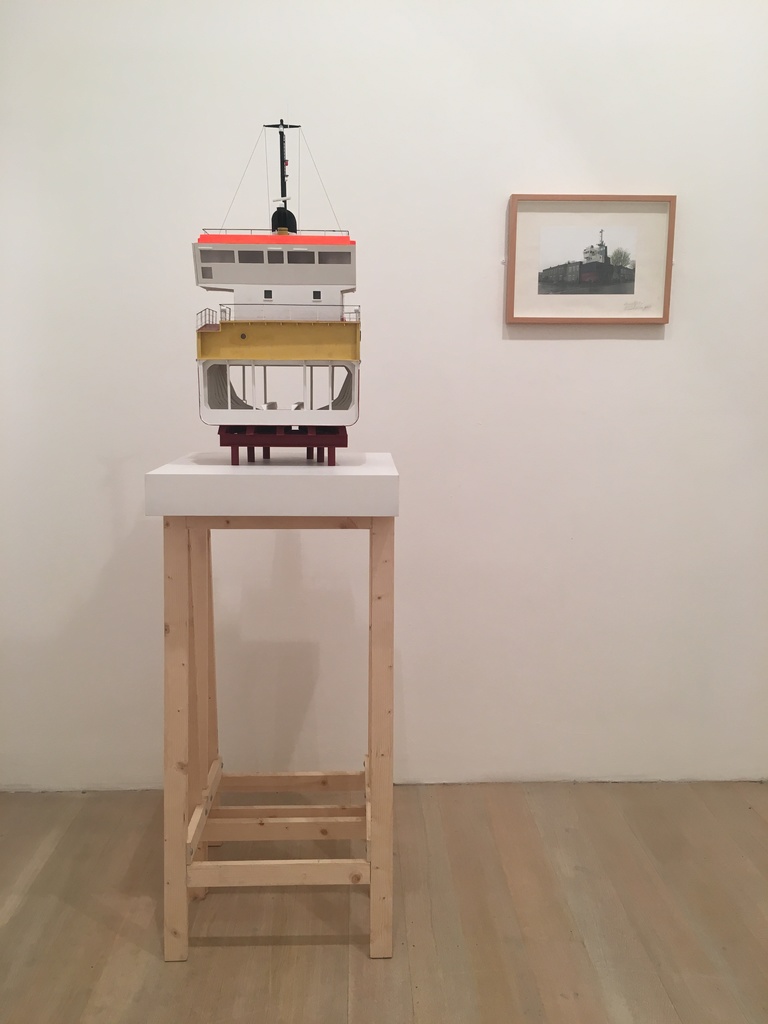 Architecture is an ongoing obsession for Wilson, as he explores how to manipulate and alter structures; ‘a flat plane can be moved around to become a heavy, weighty volume.’

Architecture is an ongoing obsession for Wilson, as he explores how to manipulate and alter structures; ‘a flat plane can be moved around to become a heavy, weighty volume.’ All of his new large-scale works are supported by metal props, which Wilson encourages us to think of ‘like a plinth for the work, or a piece of string attached to a helium balloon.’ Made of wood and birch ply like a maquette, these new works can appear ‘rough and ready, but they can also appear alive and beautiful.’ Wilson is a big believer in ‘not overcooking it’ but would like to explore the idea of creating new work in stainless steel, following a similar process to the one behind ‘Slipstream’, his iconic 70-metre long installation at Heathrow’s Terminal 2.

‘City Block’ was Richard Wilson’s proposed public sculpture (and part of the winning bid) for Hull’s City of Culture 2017. He describes how this work was intended to be a way of ‘finger-printing the city’, where they picked eight well-known buildings, from the old Fish Dock to the Guildhall, and scanned each of the facades to make a random amalgamation. Wilson had previously spent months up in Hull, working with renowned engineering firm CSI, to create the monumental 'Slipstream' and speaks somewhat wistfully about the polished aluminium panels in the workshop… ‘I try to make what I can’t…’ shrugs Richard, explaining that he is always drawn to complex building sites and intricate sculptural puzzles. 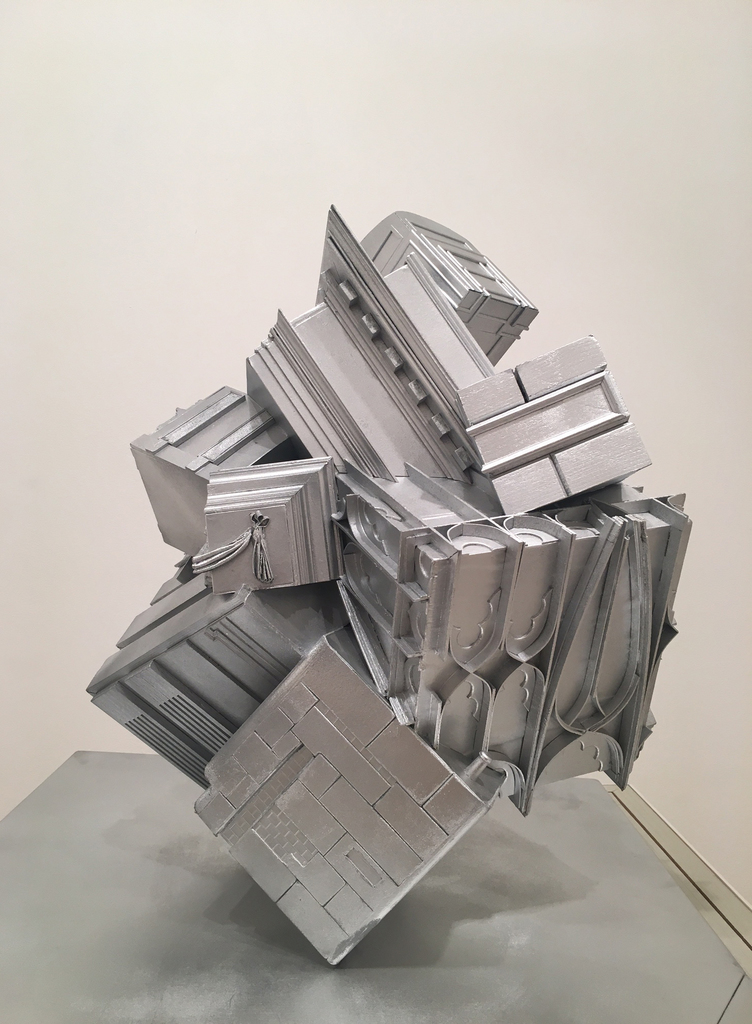 Exploring interior and exterior space, and how to connect the two, has fascinated Wilson for the past thirty years and this obsession is explored in ‘Stealing Space’, an exhibition of new work that documents public and private, domestic and industrial spaces. New sculptures appear ready to hurtle through the elegant glass atrium of Annely Juda, or scrape the roof’s beams; Wilson’s relationship with space is never an entirely comfortable one. It’s there to be manipulated, with pieces that expand and contract, and he encourages all of us to hunt down clues in the negative spaces. There is always an alternate view of buildings and cities, if only we know where to look. 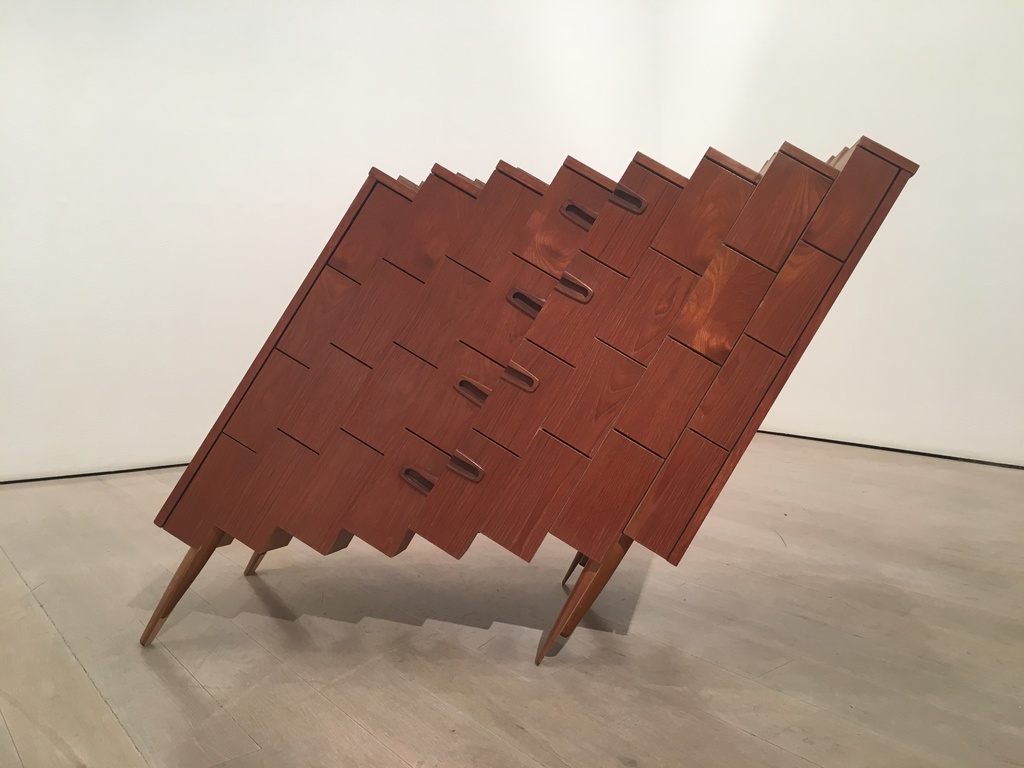