Libita Clayton is digging. Digging through the stories of a land, through newspaper clippings and personal testimonies, physical spaces and nearly-vanished traces. Plunging into the Namibian earth, she hits reserves of uranium stashed beneath its craterous surface – as politically charged as it is radioactive, and crucially finite.

Are we above? Below? Within? We could be floating in outer space, or gawking into the bowels of the Earth; our sense of perspective is confused by the combination of abstract shapes and bright light shining through the images themselves. 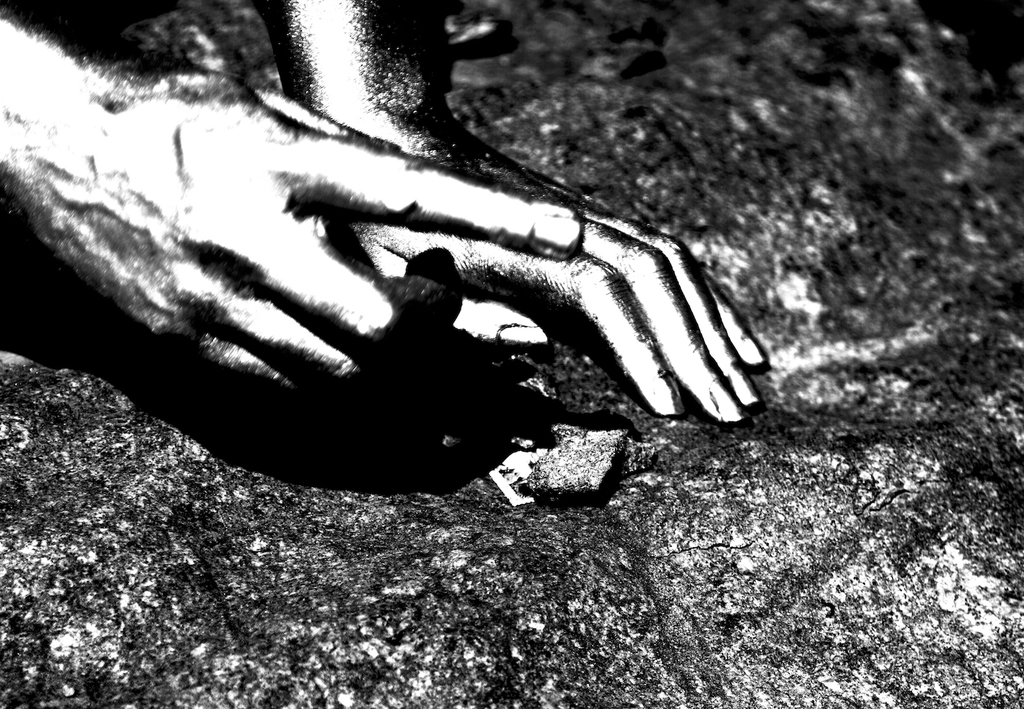 Libita Clayton, Untitled, 2018. Photograph. Courtesy of the artist and Brain the Tool

Her artist’s spade clangs as it hits fresh memories, lodged alongside the mineral ore in its hiding place: a miner’s tale entangled in political, social and colonial histories. Mining is an integral part of Namibia’s identity; the country’s mines cough up 7% of the world’s uranium, bringing geopolitical dynamite from beneath the ground and into contention. Certainly, it’s a fact that contributed to South Africa’s bids to curb Namibia’s 23 year-long liberation movement. In the compact space of Gasworks, then, Clayton’s work moves between Cornwall’s tin mines and those of Walvis Bay, Namibia, reaching along a timeline that stretches from the 1980s to the present. Reaching out to her British-Namibian heritage – via sound, photograms and even live performance – Clayton asks, what remains? It’s a question posed of both the mines’ exhausted subterranean space and the memory of a population who, until 1990, lived beneath the thumb of their South African neighbours. 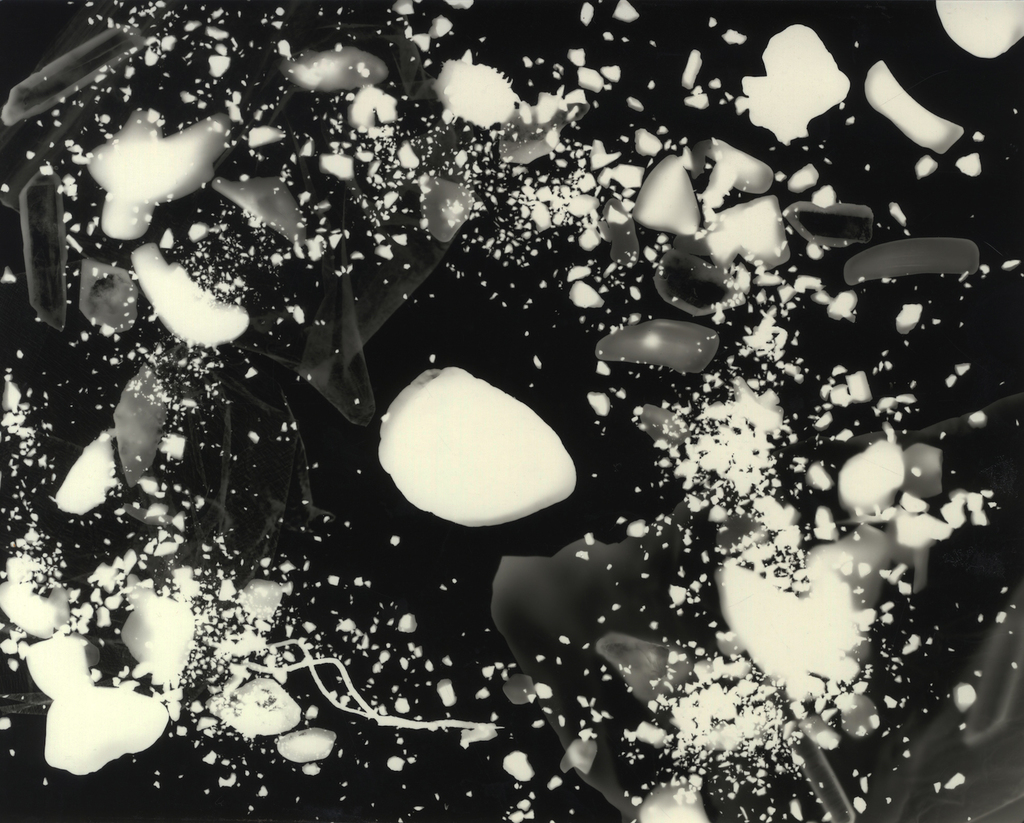 I stand before a series of black and white photograms, their timeless monochrome somewhere between a still from Interstellar and a graphic meteorite collision. Are we above? Below? Within? We could be floating in outer space, or gawking into the bowels of the Earth; our sense of perspective is confused by the combination of abstract shapes and bright light shining through the images themselves. The duality of her heritage extends to the artist’s research, and ‘Quantum Ghost’ explores the story of Clayton’s father – exiled, from Namibia to Cornwall, for his involvement in the pro-liberation South West African People’s Organisation. Once in Cornwall, he studied mining engineering and worked in the tin mines. Clayton’s artistic eye roves in two places at once; she is both archival researcher – forensically examining the colonial scars left on Namibia’s dry, dusty skin – and caring daughter, her father’s diasporic existence deeply entrenched within her own sense of self.

Clayton’s process reveals a hard-to-swallow truth – stories, for those in exile, can be scattered like ashes. 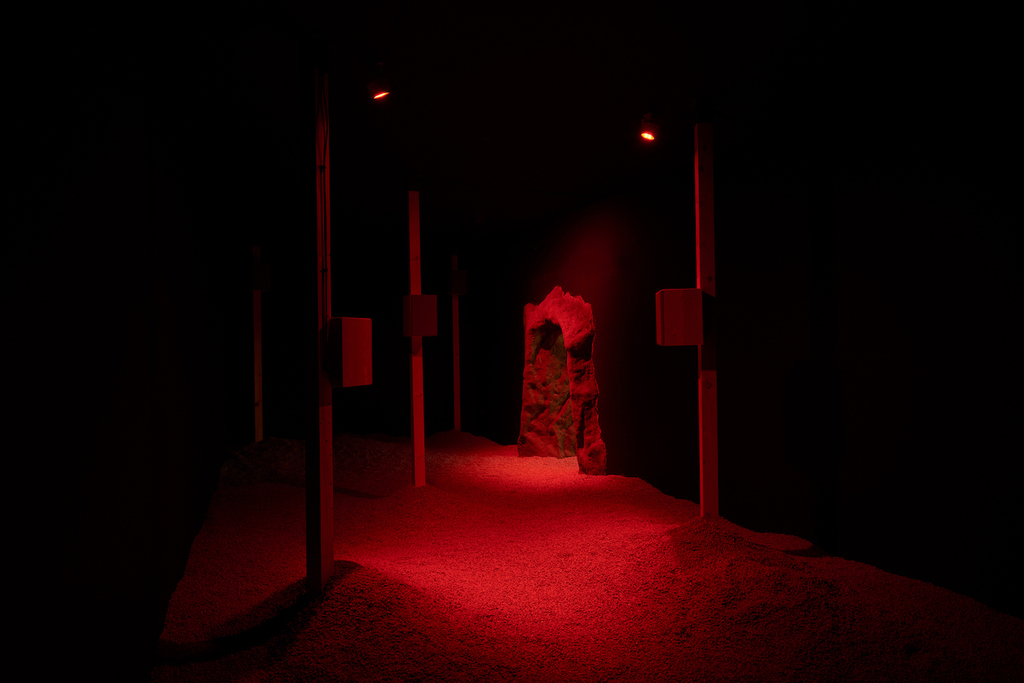 On the walls before me, flying pieces of quartz and jagged rock overlap with rounder, more sensuous shapes. A halo of light at the end of the tunnel; the patch of sun that hovers above the ocean surface. Even as Clayton’s photograms mesmerise with their assertive geometry, rupture and violence are called to the surface. The fragments we see are found objects, from mines in Namibia and Cornwall, and their displacement itself is enough to create a sense of unease. What force first saw the fragments tumble? Dynamite perhaps, or a drill boring into the rock – invasive procedures on exploited land. It’s difficult to get a grip on the timeline of events that went into each image; concrete certainty slips out of grip as I try to guess the origin for each element. Clayton’s process reveals a hard-to-swallow truth – stories, for those in exile, can be scattered like ashes. There is a certainly a feeling of desolation to her work. The words ‘Namibia, Independence, Reconstruction, British Government, Uranium’ are written on scraps of newspaper, embedded into the surfaces and constituting little insights into Clayton’s complex research process, pulling us from the parched mines of Walvis Bay, Namibia, to windswept Cornwall along with her family. 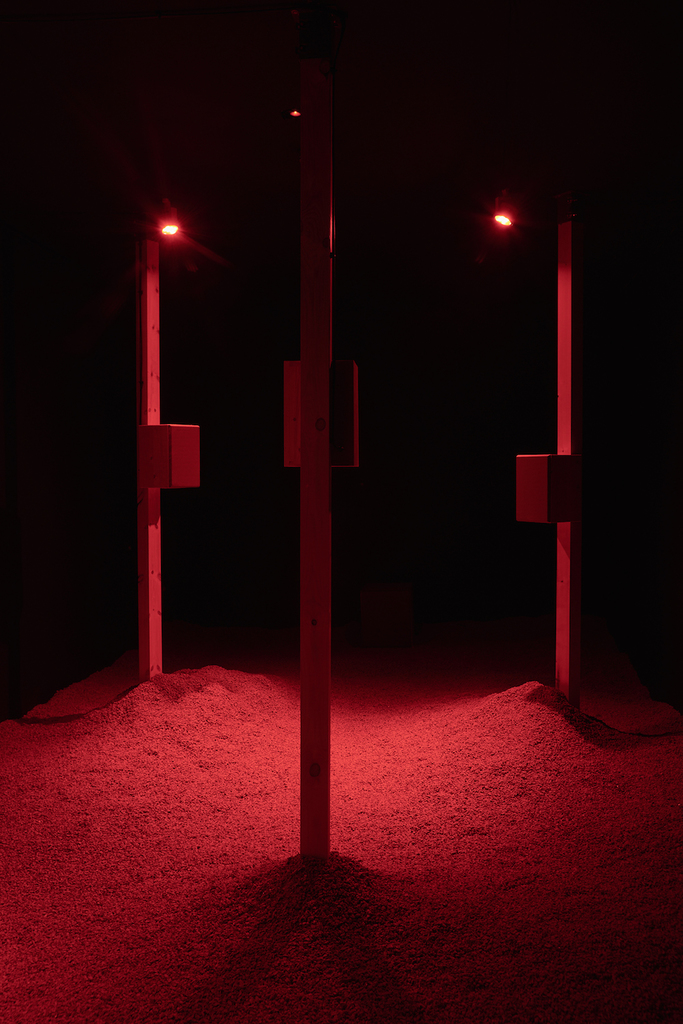 Most startling is Clayton’s 21-minute-long sound installation, a remarkable amalgamation of field recordings, geological audio of the Earth and ancestral voices, co-produced with musicians and sound artists. It is immersive, inescapable and all-consuming. Enter the listening room through the mud and straw tunnel: the opening of a mine, or – as the curatorial leaflet eerily suggests – an ear canal. In the claustrophobic semi-darkness, previously dormant sounds are reactivated, blended and pushed through four separate speakers. The noises rise and fall in the small space. The polyphony is intense, disorientating; a sonic recreation of her family’s displacement. We hear the muttering of a deep bassy voice – Clayton’s father, we assume – whose words are distorted. Layers of female singing collide with steely, industrial sounds, dissonant noises that drill into the ears. The shifting soundscape communicates the seismic shift in Clayton’s family, profound as any earthquake. Clayton’s work is at its best when combining oral storytelling and archive; on one hand, she expresses brokenness by illuminating diasporic memory whilst considering the devastated landscape from today’s perspective of ecological concern. On the other, Clayton orchestrates a feeling of completion. Her use of sound, and chosen modes of production, mediate a weighty personal narrative and offer an alternative ending to a story that could have felt forlorn.

Highly aware of my body, free to move but confined by the oppressive space, I have the distinct feeling of trespassing, of stepping inside the Earth – the epitome of No Man’s Land. 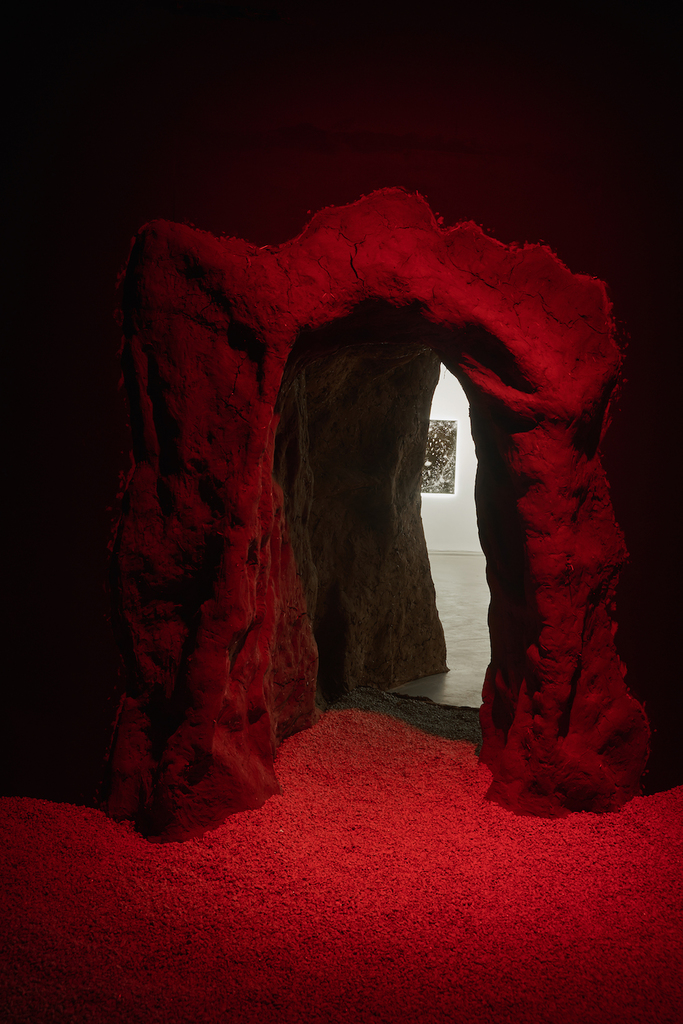 Beneath my feet, mounds of gravel crunch abrasively in the seconds of sudden silence which hover like an intake of breath. I am reluctant to step beyond the sanguine patches of light into the shadows that cluster at the room’s edges. Highly aware of my body, free to move but confined by the oppressive space, I have the distinct feeling of trespassing, of stepping inside the Earth – the epitome of No Man’s Land. Then, the hiss of a gas lamp and a hacking noise – man’s woodpecker-like activity inside a mine shaft. The steadfast destruction of Anthropocene activity is communicated through these instantly recognisable sounds, heightened in a room devoid of any other. Continue on this path, and our own displacement might prove another drill: closer than we think.

As Clayton’s father speaks, subterranean memories surge above ground, reaching up, up, up, into the present from their burial place. Chronology becomes irrelevant; ancestral voices mingle with futuristic computer-generated sounds, the deep time of Earth itself translated into low, resonant vibrations. Events cannot be separated by time and geography alone: even such seemingly disassociated places as Cornwall and Namibia are fundamentally linked here. Denying the convention of time, Clayton reactivates histories hitherto left to wither at the bottom of a Namibian mine shaft. Filling the hulking gaps of a colonial archive, Clayton’s hand now holds the proverbial pen that writes her father’s story. Promoted from plot-point to author, she sees temporality exchanged for topography – nothing is un-erasable. Turn the page.