We think we know what Sci-Fi is. It’s knights who use lasers instead of swords. It’s Graeco-Latinate words like sonic, hyper, turbo, which sex things up a little (imagine saying milky, instead of galactic). It’s heated arguments that no-one outside a particular tribe or clique will understand: ‘No, but Picard is way better, because he returned to humanity after Borg assimilation – who cares if Kirk made a makeshift bazooka while he was fighting Gorn?’ That kind of thing.

Sci-Fi is Graeco-Latinate words like sonic, hyper, turbo, which sex things up a little (imagine saying milky, instead of galactic). 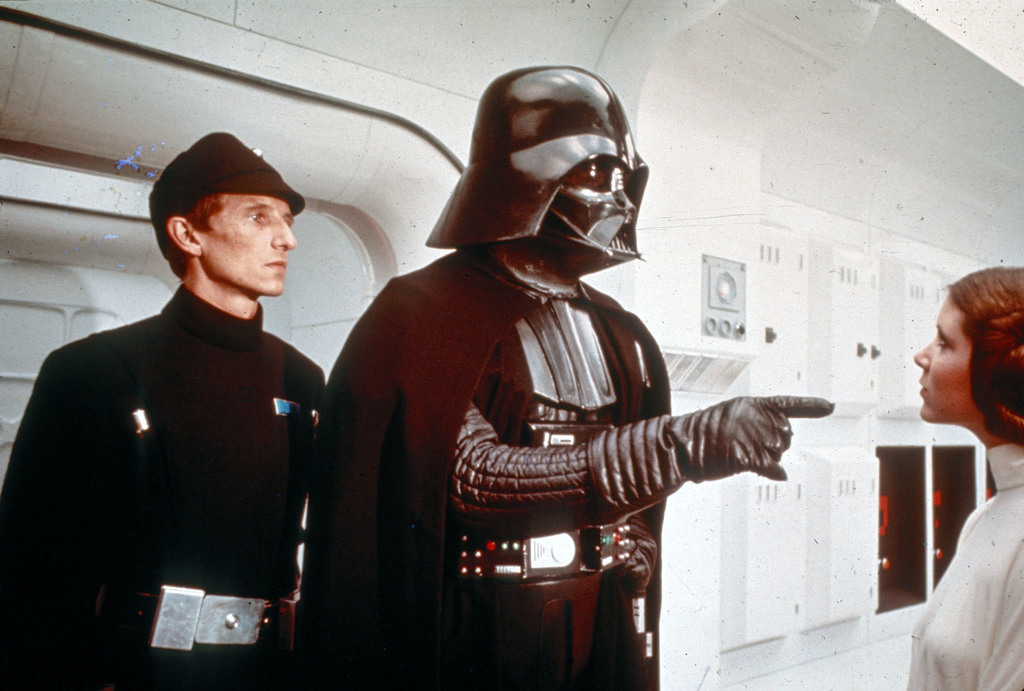 Into the Unknown: A Journey Through Science Fiction Film Still, Star Wars, Episode IV: A New Hope (US 1977). Courtesy the Ronald Grant Archive.

Dismissed by high culture since its birth in the 19th century, science fiction is an anomaly. Its appeal seems either to be universal or minutely specific. Everyone loves Frankenstein, but not very many people get Neon Genesis: Evangelion. This range of appeal is reflected in the Barbican’s Into The Unknown, which features everything from worldwide hits like Star Wars to pieces from outsider artists like Royal Robertson. Which brings us to the exhibition hall.

I’m standing in a cabinet of curiosities that’s been put through a sci-fi filter. Film props are presented like artefacts. Everywhere there are storyboards, paintings, books, all stacked and jostling for room. This is a dark space with shafts of light and videos playing on screens above my head, such that ghostly holograms appear in all the photos (unusable) that I’m trying to take for this piece. There is a much younger boy, who used to read Spiderman comics behind his French textbooks, rising within me. He’s looking at another boy, here, scrawny and too young to have acne but too old to be pressing his nose against a display case, staring at the sheen of Darth Vader’s helmet. I pass by Anuboid headdresses from Stargate, registering fingerprint smudges and condensation from the devotee’s happy breathing on the glass. Honestly, I would if I could. No matter how poorly executed a particular film franchise, perhaps I will always be incapable of not finding something like an alien fleet emerging through a wormhole above New York City ridiculously cool. 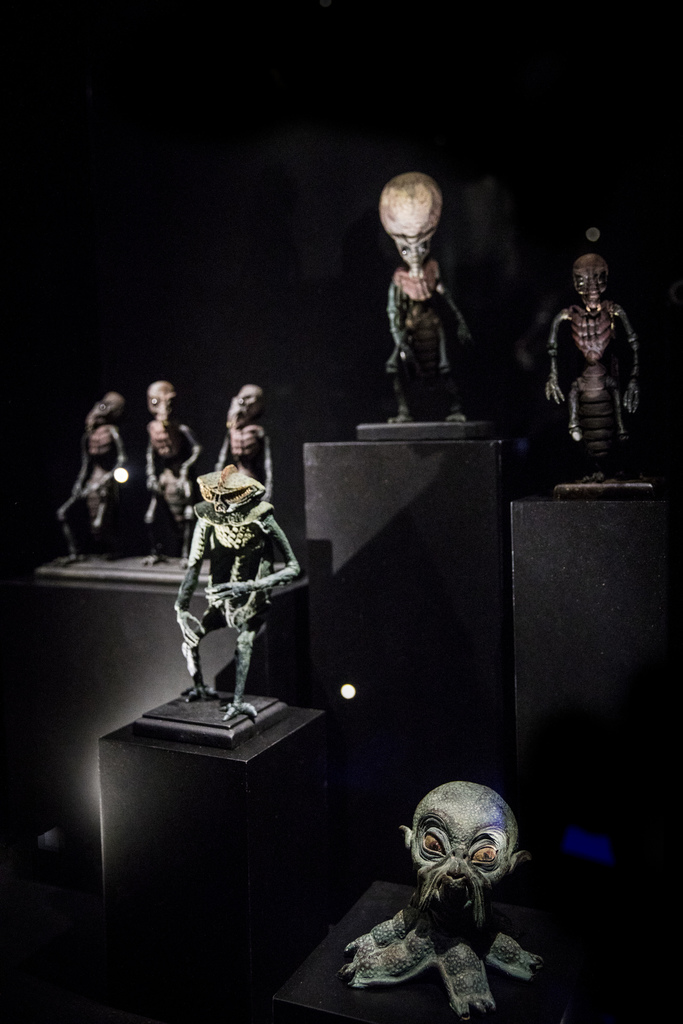 Sci-Fi is an interesting one, relying as it does on the marriage of two seemingly incompatible disciplines, Science and Literature. Science is cold, hard facts. It’s equations and test tubes. Objective truth. Whereas literature is conjured up by starving writers in ivory towers, used to express our deepest fears and desires and the intricacies of human experience. Subjective fiction. How to reconcile the two? I’d argue that - contrary to surface impressions - the two operate by the same process: metaphor. Neither science nor literature is metaphor, but both employ the mechanism to express the inexpressible. Close your eyes and imagine an atom. Tables, solid enough to rest your cereal bowls on, are actually mostly empty space. Science has used various analogies to explain this seeming impossibility – first, we tried something called the Plum Pudding Model. Then what we knew changed, and now my physicist friend advises that I imagine an atom as a business of flies circling a cowpat. Electrons are no longer planets orbiting a sun, which is what I learned at GCSE. Literature works in much the same way. To pull your reader into your story (of which they may have no experience) you have to give them something to hold onto. “If hairs be wires, black wires grow on her head”, wrote Shakespeare. I’ve never met this mistress, but I have seen wires, and I now have a pretty good idea of the texture of her hair. See?

Back in the exhibition hall, I’m wondering: how many ways are there to read the image of a pterodactyl snatching a man from his horse? Ray Harryhausen’s drawings from the 1969 film The Valley of Gwangi are easy to dismiss as silliness, but there’s something timeless about the tableau – and not just because of the collision of dinosaur and horse. On a very basic metaphorical level, horse is passage and safety; pterodactyl, interloper and threat. If the pterodactyl wasn’t there, the lone rider could have been thrown by the horse, or shot from it by a rival cowboy. I have any number of reference points, familiar prisms through which to approach this strange scene. The pterodactyl, however incongruous, stands for all these threats, and many more we can’t specify. Nonetheless, it’s a pretty primal set-up: predator and prey; security and peril. There’s plenty to hold onto, even if I can’t draw on direct personal experience, and so unfolds the visual metaphor. 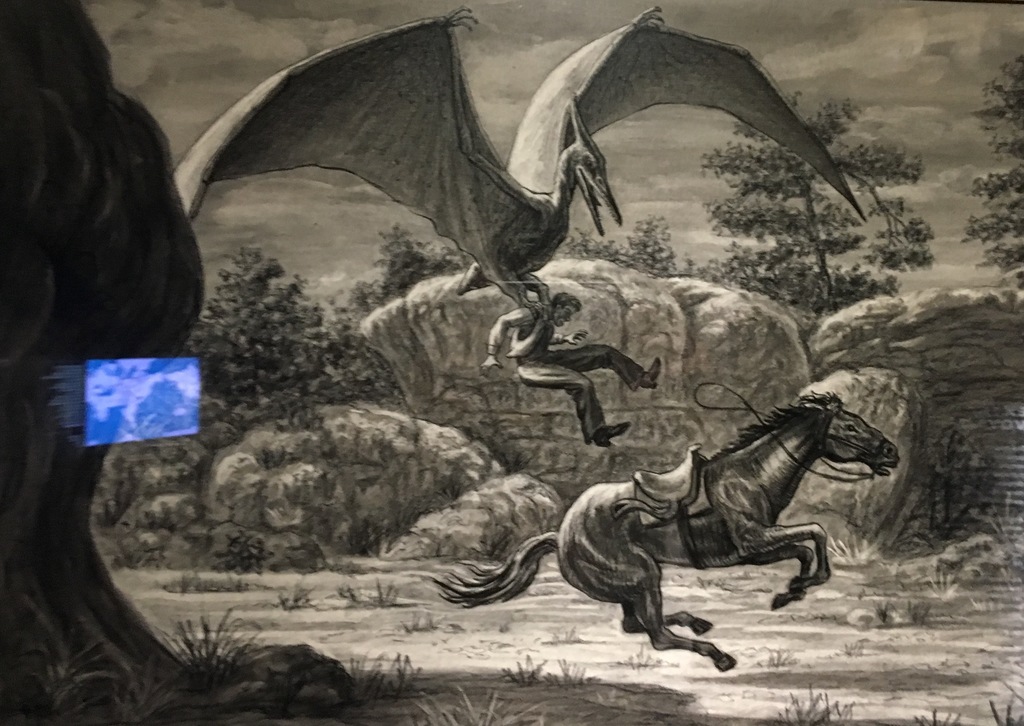 Install shot of a drawing by Ray Harryhausen, from the 1969 film The Valley of Gwangi

Now I’m on a lunar vista, rendered in charcoal. There’s an astronaut in near-complete shadow towards the frame’s foreground, and a huge grey planet, looming up over a craggy and barren landscape. This is George Gibbs’ Stranded, 1916, and the drawing’s title compounds the unease imparted by its subject matter. The horror of this image is the universal human terror of isolation. To be alone – on a far-flung planet with no hope of rescue, or even at a party – is a terror as primal as the one analogised in pterodactyl/horse above. Looking at, and creating, drawings like this are a way to subjugate our deepest fears. The astronaut is a metaphor for every one of us; the planet, for loneliness itself. You can get a lot out of geeky sketches, can’t you? 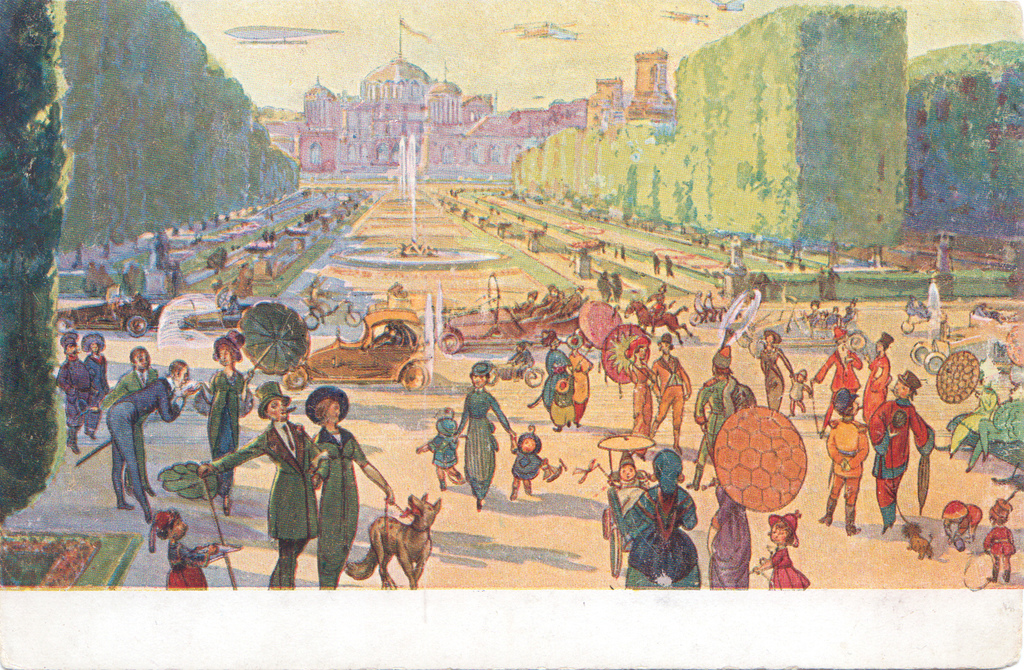 The astronaut is a metaphor for every one of us; the planet, for loneliness itself. You can get a lot out of geeky sketches, can’t you?

Now let’s jump back in time, and not within the exhibition – rather, for some attempt at context. 1543, and Copernicus has discovered that the stars he saw last night east of Jupiter are now on its west side. Not fixed stars, then – rather, moons in orbit. Which leads him to think that the earth is not the universe’s centre. Everything does not revolve around us. This idea, accepted now by all but outliers and cult leaders, was vastly heretical when first voiced. God designed the universe, the heavens, the earth and all upon it, in seven days. The earth is God’s masterpiece - isn’t it? If we are not the ‘centre’ of it all, where do we stand in relation to things and to each other? If Genesis can be questioned, what happens to the absolute truth of the rest of the Bible – especially in a world ruled by religion, like Medieval Europe where this idea first took hold? Arguably, and although Into the Unknown doesn’t broach this ground, the advances of the Renaissance paved the way for science fiction, and the introduction of metaphor as a tool to understand the world. It rumbled the status quo squarely enough to throw absolutes into question, leaving human beings to fill in the blanks. Where once there was blind faith, a kind of interpretive freedom arises: perhaps there wasn’t literally a talking snake in the Garden of Eden, but maybe it’s a useful metaphor for thinking about temptation. 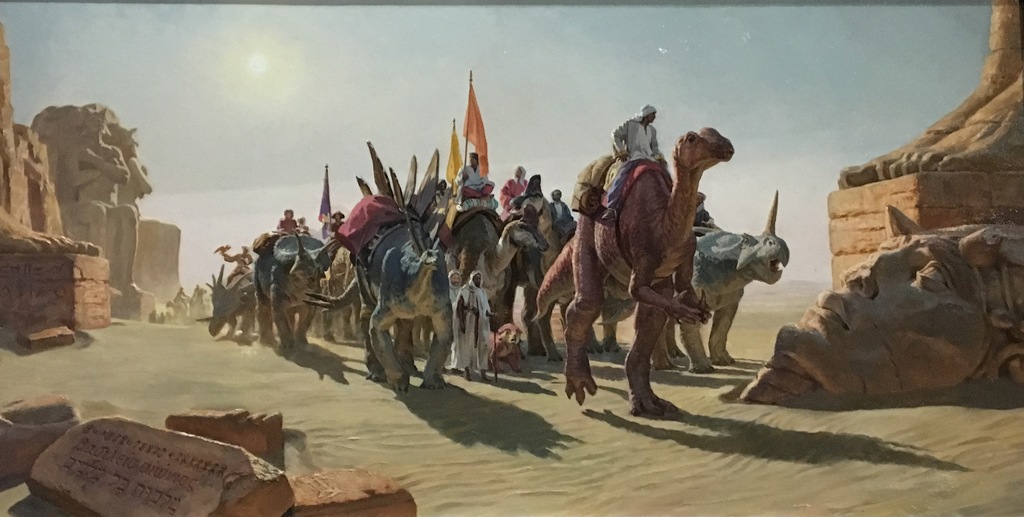 Without the stable ground of prophecy, the linear movement from paradise to apocalypse to salvation, it’s left to us to speculate on what might happen, when and how. We begin with what we know, as with any workable metaphor. All Science Fiction requires an element of the recognisable, a touch-stone from which to reach out into the dark. Even James Gurney’s parade of dinosaurs has something familiar to offer: his Dinotopia images invoke those of Carthaginians riding into battle on elephants (as depicted by Henri-Paul Motte, for instance), something we’ve been looking at and talking about for hundreds of years. We can’t imagine something we’ve never seen; we can, however, compile reference points and slam them together to understand something ‘new’. Metaphor within science fiction works in much the same way as dreams do: a mélange of stimuli, images and themes we don’t know we’ve absorbed are reconstituted to greater or lesser effect. Sci-Fi offers a way to dip our toes into the terrifying uncertainty of the future, made safe by the assuredness of narrative. Where there is unknown territory, there needs to be a way for us all to get there. Whether in science, or in fiction, metaphor is the key bridge into the unknown. 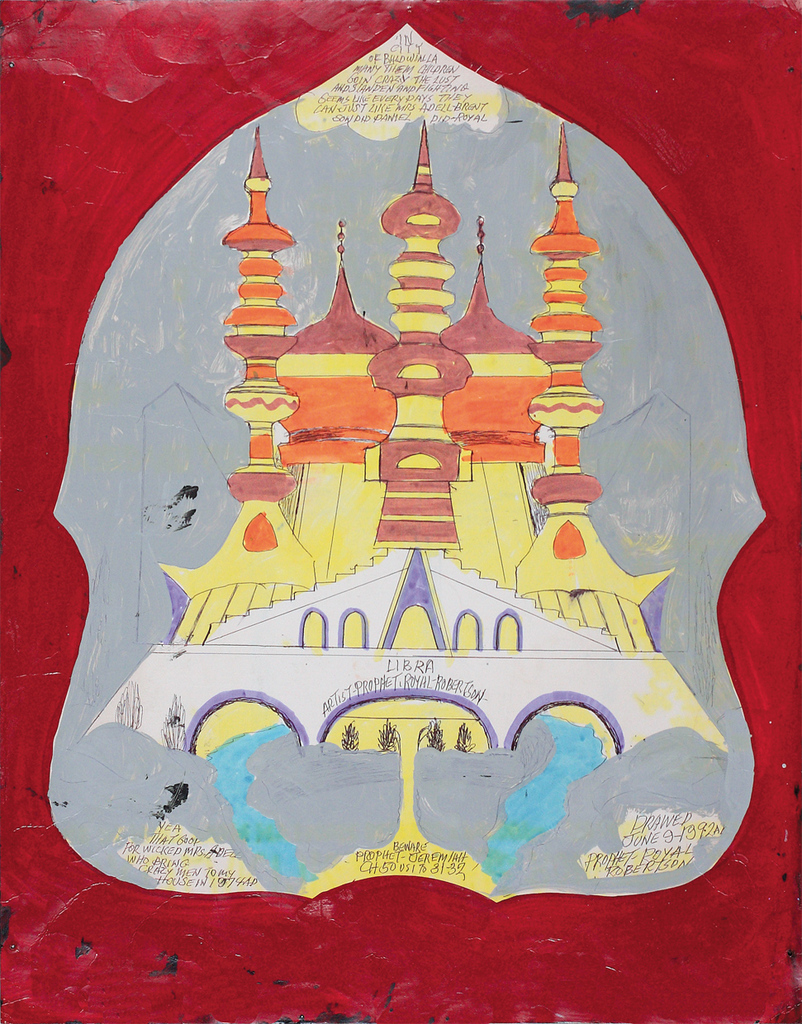