At the Zabludowicz Collection, LuYang NetiNeti’s digital figures - variations on DOKU, their own digital avatar - perform movements that exist somewhere between dance and the hand-to-hand combat of fighting games. These images are like a cross between Tekken 3 and PC Music. The former a classic fighting game - possibly the peak of the franchise before its strange, wilderness years as gaming moved from one generation of consoles to the other - and the latter a record label that generated so much of the hyperpop genre. Hyperpop is defined by its relationship to the internet; nostalgic for the visual language of minisites like Geocities and Angelfire, and full of the possibility that a digital self could offer. These complicated layers of nostalgia, material signs, and the otherworldliness of cyberspace, are the foundation of LuYang’s work. 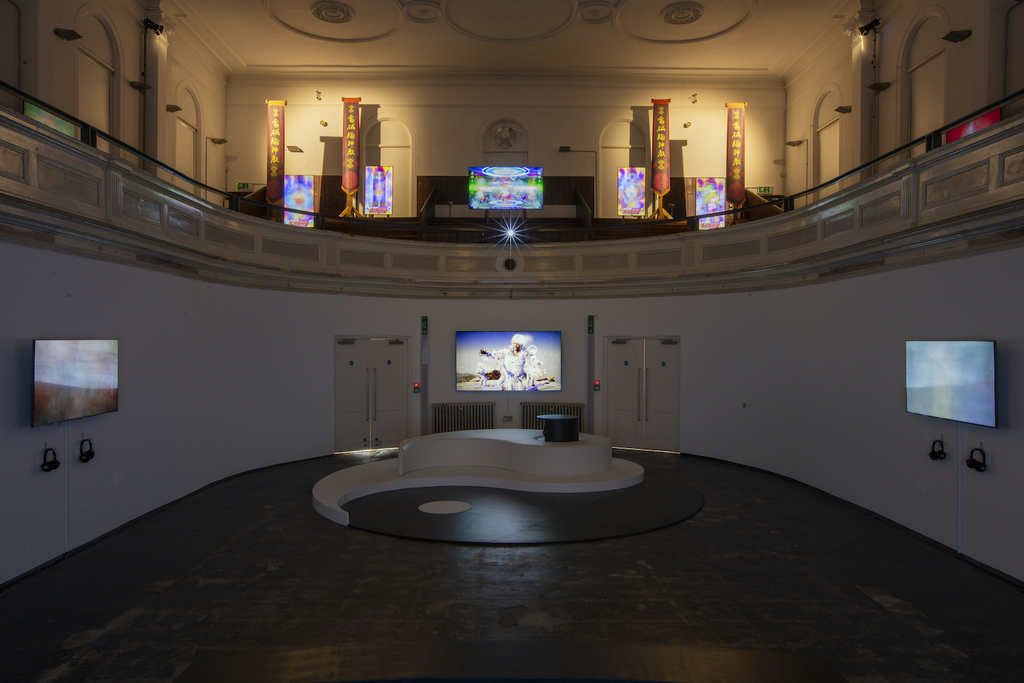 The artist's exhibition title, ‘Neti Neti,’ means ‘neither this, nor that’, a sign that their work would be at home stealing and remixing from a wide range of cultural artefacts and moments in time. There’s a moment in DOKU the self where a piece of advice is given: ‘stop creating illusions.’ At the heart of the exhibition is the question of what an illusion is; how it relates to the material world, and what - if anything - can be done to transcend it. 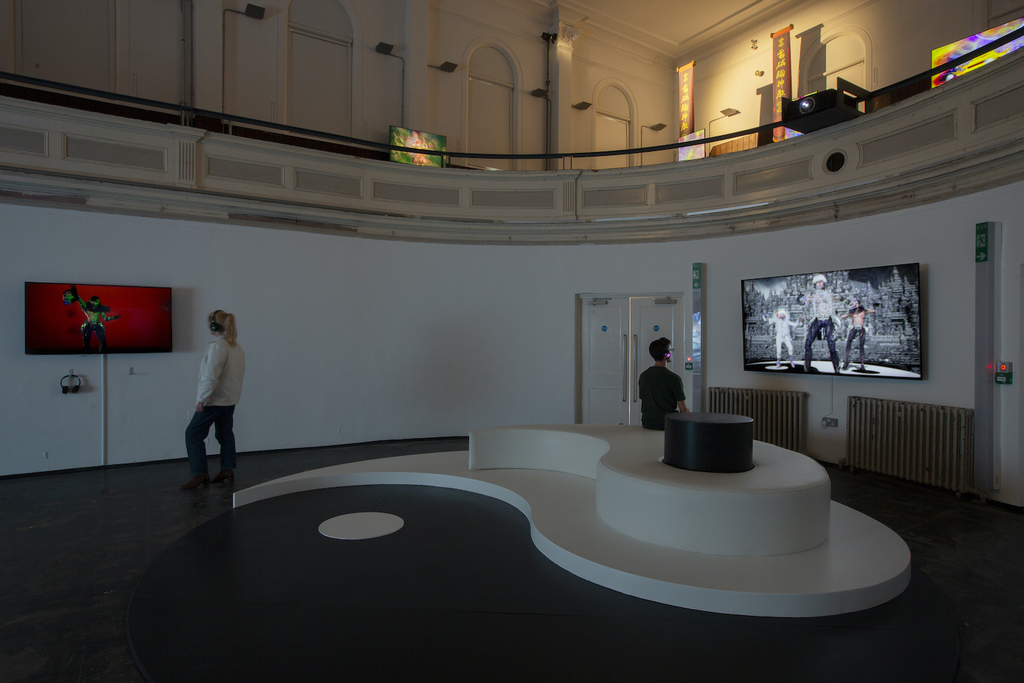 LuYang's figures are given archetypal names and representations; from the white and black clad representations of HEAVEN and HELL at the heart of DOKU Binary God (2022) to avatars that populate DOKU the self (2022). One of them, ASURA, is a classic anime mech: exaggerated shoulders and boots, a metaphysical version of the giant mechs that define anime like 1995’s Mobile Suit Gundam Wing. These figures are simultaneously material and allegorical, made to represent other parts of DOKU, the artist’s avatar. Their materiality is what defines them, and yet it's the limits of that same materiality - on what it means to be physical; in terms of both the liberation it can offer, and the limitations that it encases people within. In DOKU, both HEAVEN and HELL dance around a yin-yang symbol; at the centre of location that looks almost like a stage on a fighting game. Each character a part of a binary opposition; their choreography full of tension and potential - as if at any moment they could make collide with each other and become something else. 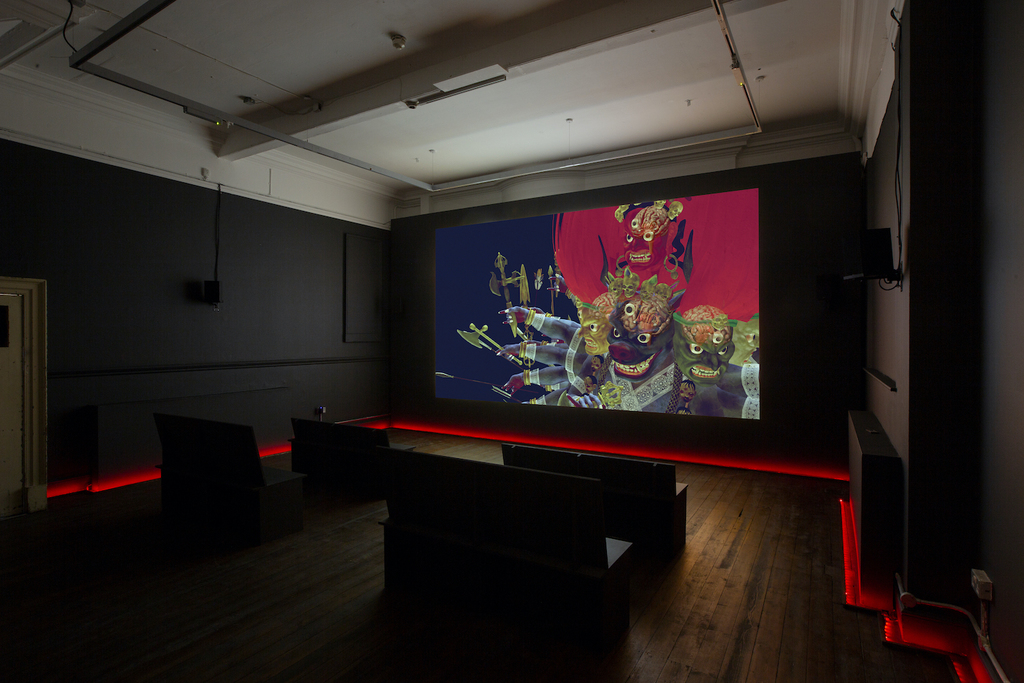 The art, and the way that it’s displayed, exists in tension with this idea of materiality. The back room of the gallery is an elaborate arcade, with cabinet staples - motorbike racing games; Dance Dance Revolution - revamped to feature characters from the artist’s work. They’re at once material and not; a deeply physical cabinet, filled with visceral memories as soon as you step into the arcade, but digital in their execution, straddling a line between the (im)material. The centrepiece for this nostalgic back room is Material World Knight; a playable game that features the artist’s characters espousing their philosophy on the material world as you travel through it, encountering everything from strange not-quite-humans inspired by body horror, to aliens ripped straight from Mars Attacks. The body, and all the materiality it represents, is pushed beyond the limits in this form, and the physical connection - through the control; wired up to a PlayStation 4 - that extends from the user’s hands to the images on screen feel like the most explicit way in which the artist is trying to create a bridge between materiality and transcendence – with emphasis placed on the prefix. 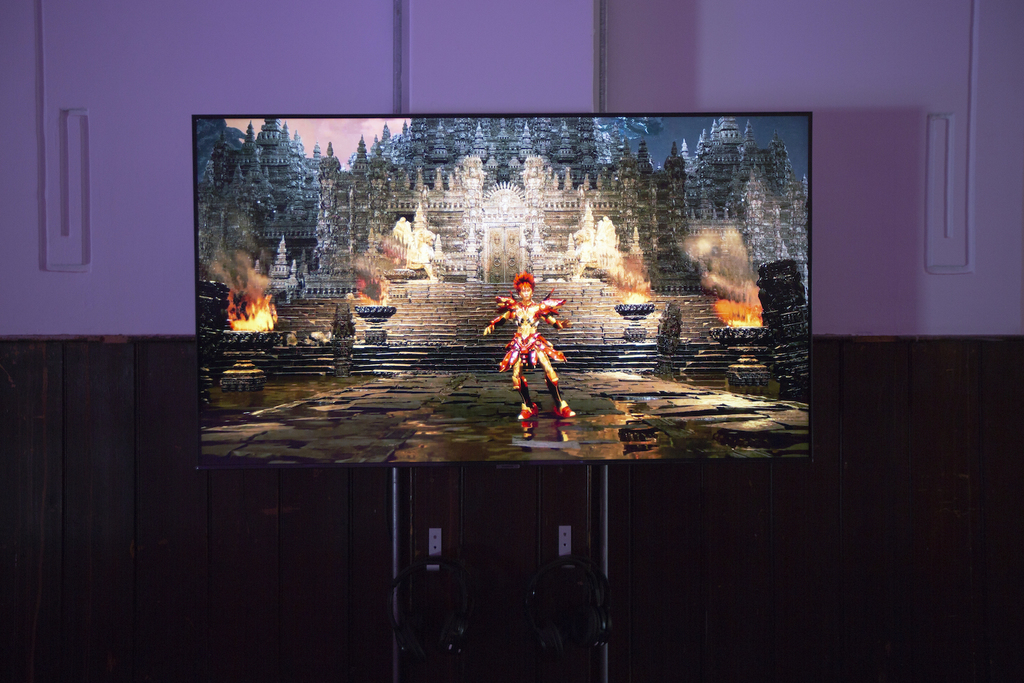 ‘Immaterial,’ from OIL OF EVERY PEARL’S UN-INSIDES, the only studio album by SOPHIE - the Scottish musician who laid the groundwork for so much of what defined hyperpop, working with artists on the PC Music label is the perfect companion to LuYang’s exploration of the space that exists between physical and digital; binary and whatever lies beyond it. Between the visceral evocation of exiting beyond the physical - “without my legs or my hair/without my genes or my blood/With no name and with no type of story/Where do I live?/Tell me, where do I exist?” - to the song’s refrain that “I can be anything I want,” it feels like it should be blaring through the arcade. The headphones that you wear to get the audio from Material World Knight have cat ears on them; a strange but striking detail on the intersection between femmes and gaming in so much of pop culture. The trope of the “gamer girl” streamer is one that immediately comes to mind - the detail of cat ears on over-ear headphones is what cements it - and moving through a game like Material World Knight feels like an otherworldly extension of these ideas: of gaming, and the possibilities that exist through, and lie beyond it. Through controllers and cables and headphones and consoles, Material World Knight creates a world that refuses the easy classification of bodies and binaries; a world where you can be anything you want. 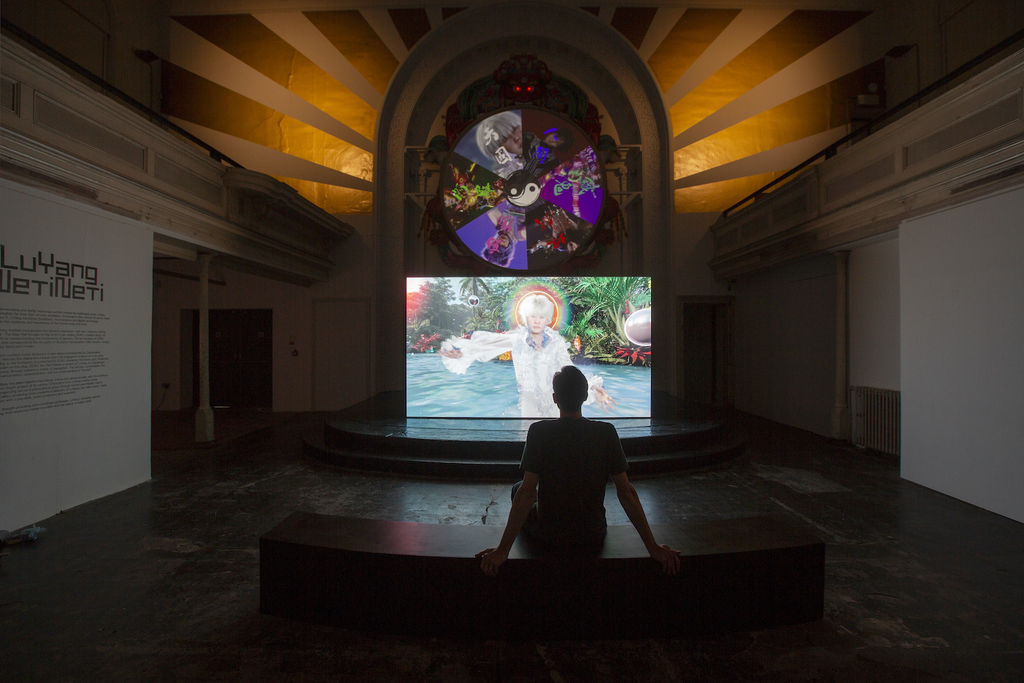 LuYang’s work argues that we use the things - the physical; material not just as the physical but as capitalism and the products that it creates - too much as a way to define ourselves; that to wear something emblazoned in a brand is simply to become an extension of it. Defined by the materiality of a world that can only make sense of itself through materials. As I write this, I’m wearing a shirt from a music festival that I went to in 2018. 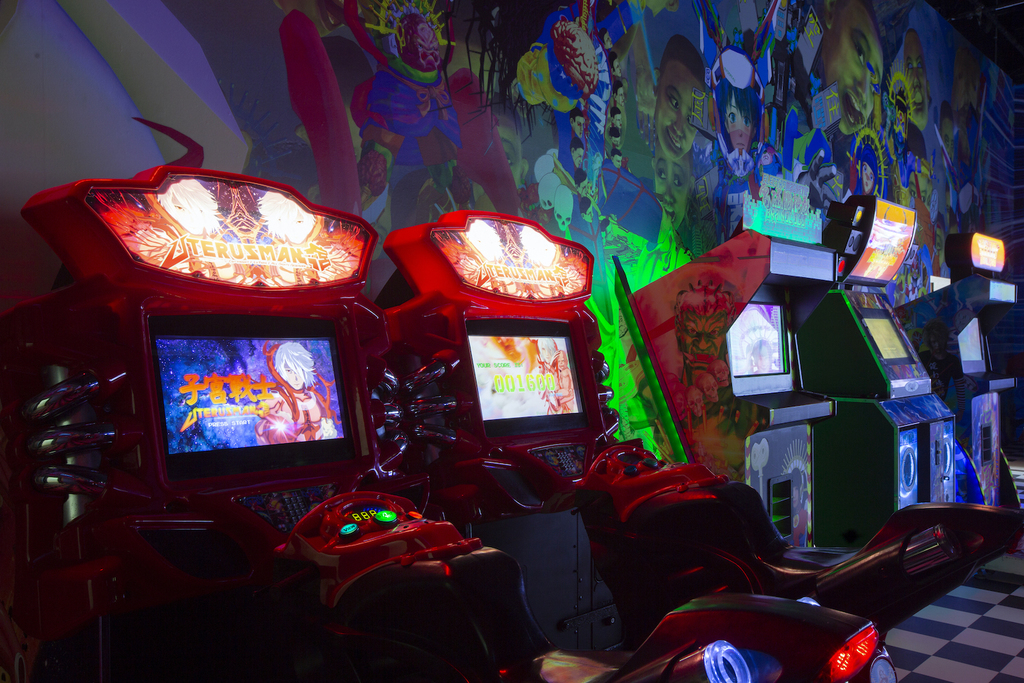 On the gallery level of the central gallery, there are smaller screens; they play fragments of the exhibition’s central video, but also smaller, more isolated things. These feature much more abstract, almost unsettling figures; like a stand from JoJo’s Bizarre Adventures, or a monster ripped from the pages of a Junji Ito manga. There’s a purple figure, with exposed ribs, a long tongue, and a circle of heads running just outside of their midriff; a red one adorned in gold - big gloves and shoulders - wearing a necklace of skulls. This is mirrored in some of the ways that LuYang explores ideas of spirituality through the iconography of gaming - in one video, the imagery and ideas of the dharma are explored and explained as if their iconography were items in a video game inventory, reminiscent of the small briefcase of herbs, keys, guns, and ammo that you get in Resident Evil 4. 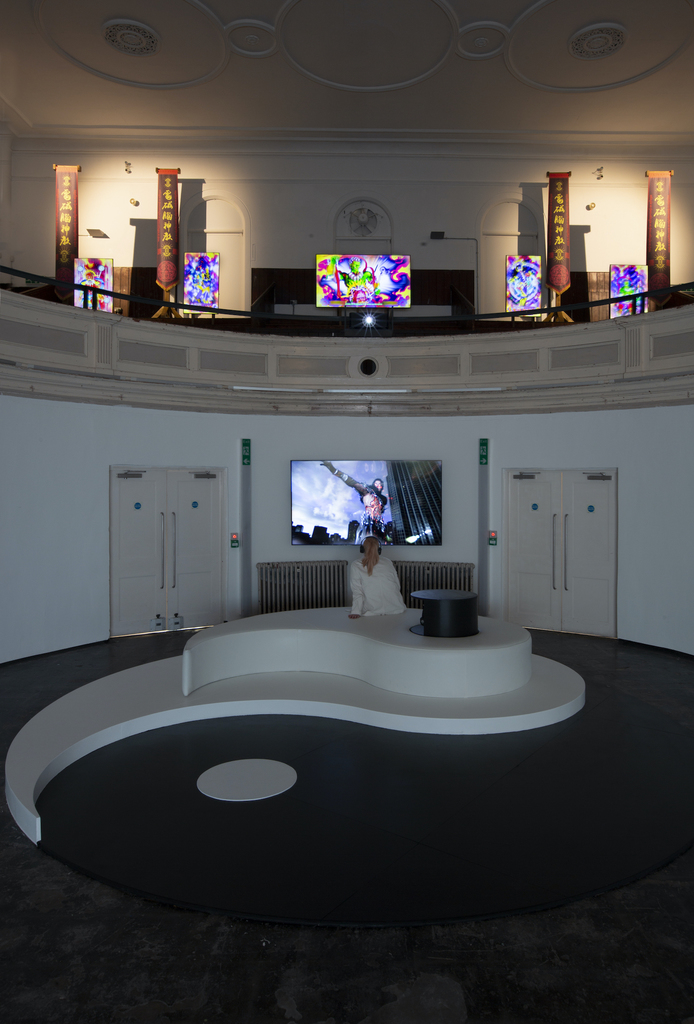 There’s something ironic about using so many references and touchstones as a way to explore this exhibition; that using this kind of language somehow flies in the face of the artist’s critiques of materiality and how much we let it define ourselves. The tension between the (im)material opens a door to something else, at once more difficult to define, and altogether simpler. This is art that tries to capture the alien; whether it’s in bodies that are uncannily (un)like our own, or the possibilities that exist when we allow ourselves to move beyond binaries, it feels like something otherworldly is trying to communicate with the only way we know how to communicate - and all of the limitations that come with it. One of the many otherworldly figures of Material World Knight says to the player’s ‘limited by concepts and images, we judge everything by appearance.’ The work at once understands this, and tries to move beyond it; bringing both itself and the viewer to the edge of one plane, unable to offer a map for what comes after, only the assurance that there’s something out there, waiting, whenever we’re able to reach it.