I Object: From Cuneiform to Cursive

From Cleopatra to cavemen, across cartoons and currency, human history is full of kickbacks and f- yous to those running the show. 100 instances of dissent come together in an exhibition curated by Private Eye’s editor Ian Hislop at the British Museum from September 6th. Each object, satisfyingly, comes from the museum’s own collection; because most of them riff on an established format (clay tablets, illustrated scrolls) many have sat for years amidst their less contentious fellows, double meanings or pointed jabs at authority unnoticed in their time or ours – until now.

From Cleopatra to cavemen, across cartoons and currency, human history is full of kickbacks and f- yous to those running the show. 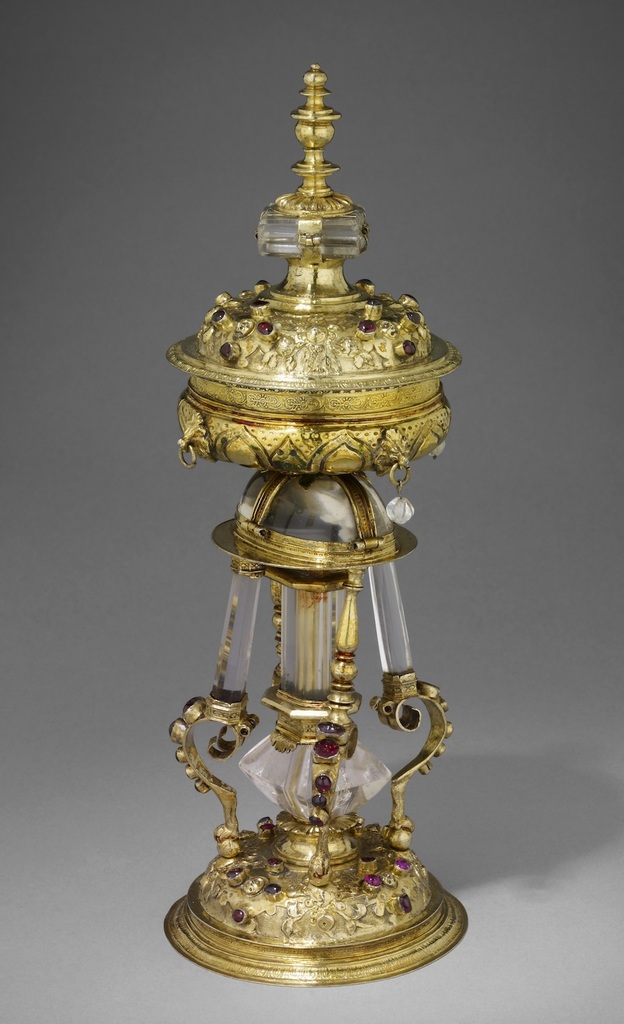 Many of the exhibits, after all, were designed precisely to evade detection – to varying degrees of success. A very gaudy ‘salt cellar’, for instance, probably didn’t fool anyone: fashioned from ornate Catholic reliquaries at the height of the Reformation, rubies and crystals twinkling from every surface, The Stonyhurst Salt repurposed Catholic paraphernalia at a time when overt Catholicism was against the law. Its owners refusing to discard or even hide the object, it would have remained in pride of place in the household – only, under another name. Sliding between categories – ‘it’s not a pyx, it’s a salt cellar!’ – is a recurring tactic of dissenters, providing ample room to sneak in a blow or two at your target without entirely giving the game away. ‘It’s not a dirty drawing of Cleopatra, it’s an oil lamp!’ cried Rome under Octavian (later Augustus), hinting baldly at the impropriety and decadence of the Emperor’s rival and his relationship with the Egyptian Queen. Goodness, does that crocodile tail look like a phallus?

'That’s an amazing act of dissent, of saying: “Me — I’m just as important as the king. It’s no sillier for me to have my name on this brick than you."' 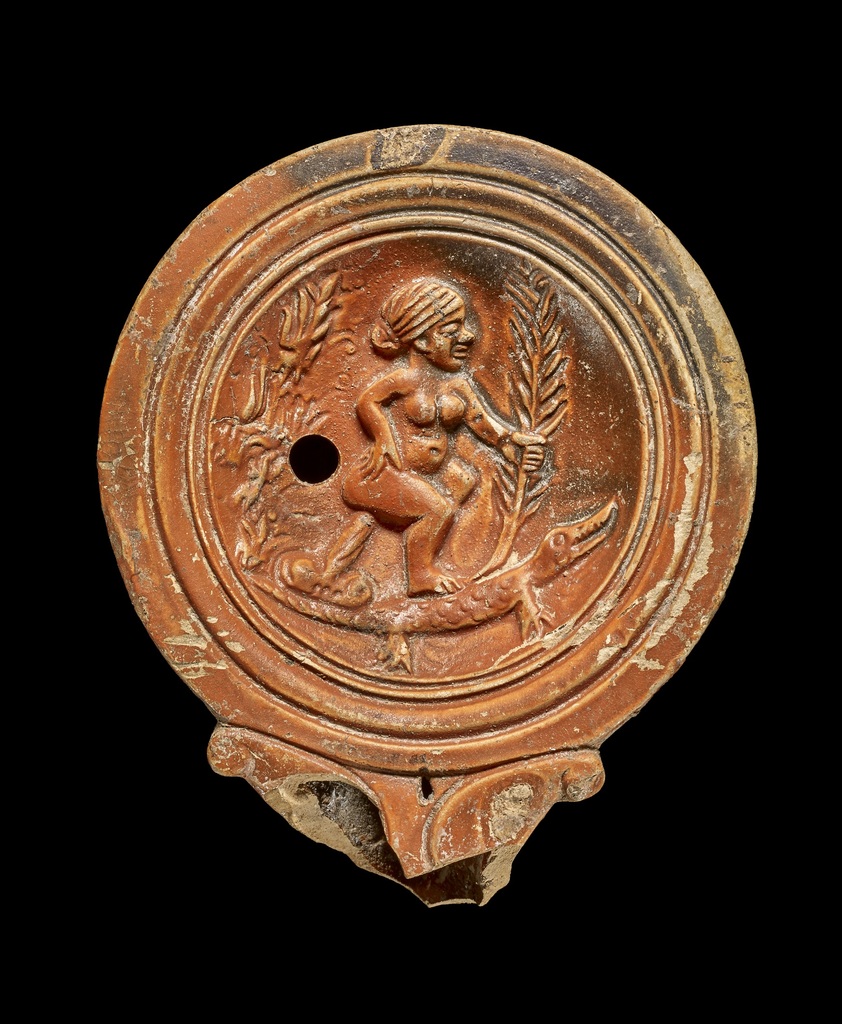 Oil lamp featuring a female thought to be Cleopatra, Roman, 1st century AD, terracotta. © The Trustees of the British Museum

From Egypt to India, 30 BC to the 19th century, an image of the Hindu goddess Kali looks normal enough – she’s wearing her ‘death of the ego’ necklace of severed heads, as usual. However, imagine it’s 1895 and the height of British colonial rule in India: a native artist might feel inclined to characterise those heads a little. To give them, maybe, pale skin. Beards. Colonial officials cottoned on and tried to suppress it but, as with many of these images, it’s not the object but the message which matters – and that was long gone.

We tend to think of dissent as something necessarily exceptional, considering how it requires a status quo to react against. Hislop’s assembly of objects, spanning 3 millennia and almost every continent, reveals dissent to be a universal impulse, and one which is manifested – often – in ways which are small; quiet; subtle. Of course, there’s the lost in translation/history element to contend with: many of the objects need some carefully worded explanatory text to make sense of, and there’s no way of knowing whether an ancient Babylonian might have gotten the joke immediately or not. Often the latter, I suspect; one of the exhibition’s oldest pieces, and amongst the first you encounter on entering, is a… brick. Long identified in the museum’s collection as ‘Brick Inscribed With the Name Nebuchadnezzar’, it was a curator there who pointed out to Hislop the name of another man (‘Zabina’, assumed to be its maker) more than 2000 years after it was laid. ‘That’s an amazing act of dissent,’ notes Hislop. ‘[…] of saying: “Me — I’m just as important as the king. It’s no sillier for me to have my name on this brick than you.”’ As dissenting gestures go, that one’s pretty cute – simple, amusing, and nicely sneaky. As Hislop writes, we’ll never know ‘if “Zabina” showed his handiwork to his friends and they shared a laugh at his audacity, or whether he did it entirely in secret.’ Either way, his handiwork went undetected by inspectors – and lucky for him, too. Babylonian kings weren’t renowned for their sense of humour or instinct for mercy, and a guy who had his name inscribed on every brick in the empire can’t have had the smallest ego. The Zabina brick is only one object in the exhibition which reminds us that the price for speaking out is rarely shared laughter or agreement; rather, imprisonment or even execution for treason might befall the dissenter. 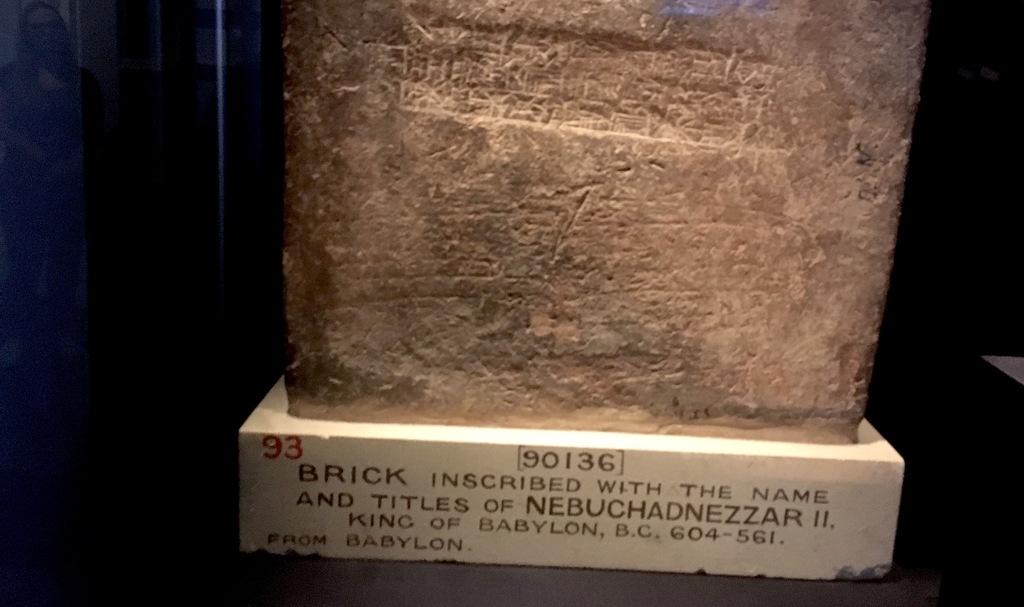 One such artefact – a personal favourite – is the imitation bank note by celebrated satirist George Cruikshank from 1819. In a time and place when forging money was an offence punishable by death, a wave of forgeries followed a hasty printing of new notes from the bank of England and many were hanged for simply handling them. After seeing two women on the gallows for forgery in 1818, Cruikshank retaliated with a note showing Britannia devouring infants; the £ symbol as a hangman’s noose; in place of the banker’s signature, that of Jack Ketch (a notoriously incompetent executioner.) In this dissent against punishment for forgery, Cruikshank laid himself bare to the same fate he was protesting. Rather than hanging for his work, the artist lived to see the impact of his visual statement. The law was soon changed, and he and his publisher earned around £700 – a small fortune at the time – from the venture. 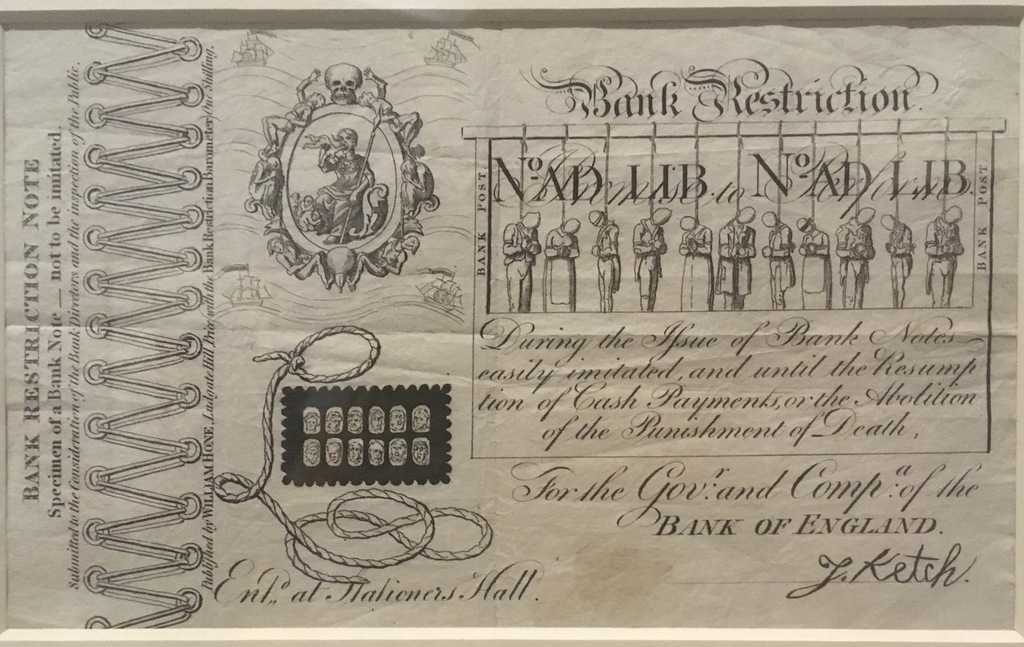 Money crops up again and again in I Object. This may be in large part down to Hislop’s co-curator, Tom Huckenhall, who normally works on coins and medals at the museum – but it’s also down to the medium’s own merits. Currency is a perfect vehicle of protest for several reasons; first, it often features the portrait of a hated ruler, or a symbolic national landmark, to deface. It’s small enough to slip into a pocket, and to stash when nosy authorities come looking for naysayers. Last, and most important, is its easy means of circulation. If you can get your message across with a note or a coin, it can slide into hands across a country or continent; it carries its new meaning with it, like a passenger, without the need to print one flyer or sign a single petition.

Money makes the world go round, and money goes around the world. 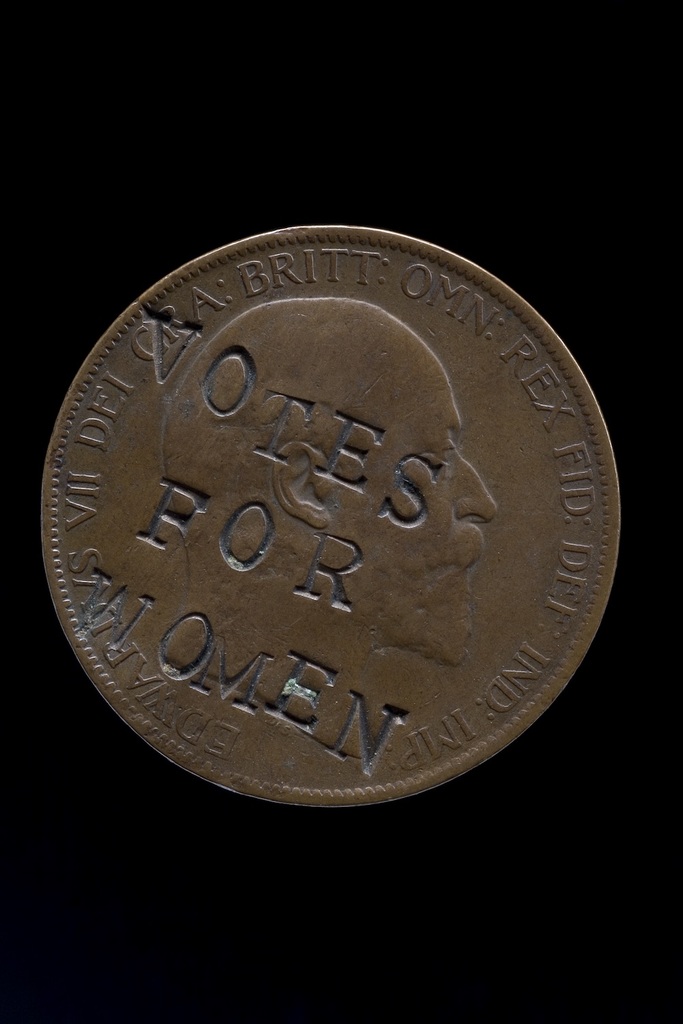 Edward VII penny, 1903, defaced with the slogan “Votes for Women”. © The Trustees of the British Museum

Money makes the world go round, and money goes around the world – here, there are notes from Libya with Gaddafi’s face excised, OBAMA WON AMERICA LOST scrawled with biro on a 10-dollar bill, VOTES FOR WOMEN stamped across Edward VII’s profile on an old penny, and NAZI over George VI’s from 1937. Money comes into play from the other side of the equation, too: our old friend Cruikshank was paid £100 by George IV “not to caricature His Majesty in any immoral situation” after publishing some drawings which wouldn’t fail to shock today. Cruikshank’s cartoons have lost none of their barb to the intervening centuries; carefully curated, the same can be said for the rest of the objects in the exhibition. Accompanying text or not, the sentiment of dissent – humorous or grave, political or personal, written in cuneiform or cursive – is one which doesn’t dilute with time or distance. While some objects need more exposition than others, the British Museum’s collection has been mined for gems and proved a rich seam – even when their own institution is the butt of the joke, as with Banksy’s fake cave painting (Peckham Rock, hidden in one of their rooms amongst other exhibits in 2005 and displayed again by Hislop). In good faith or bad, it’s healthy to take a swing at those in power, of an empire or a museum. Punch up – as we have been doing, it seems, for millennia.

Lead image credit: woven raffia cloth with image of a leaping leopard, Democratic Republic of Congo, 1970s–1990s. © The Trustees of the British Museum. 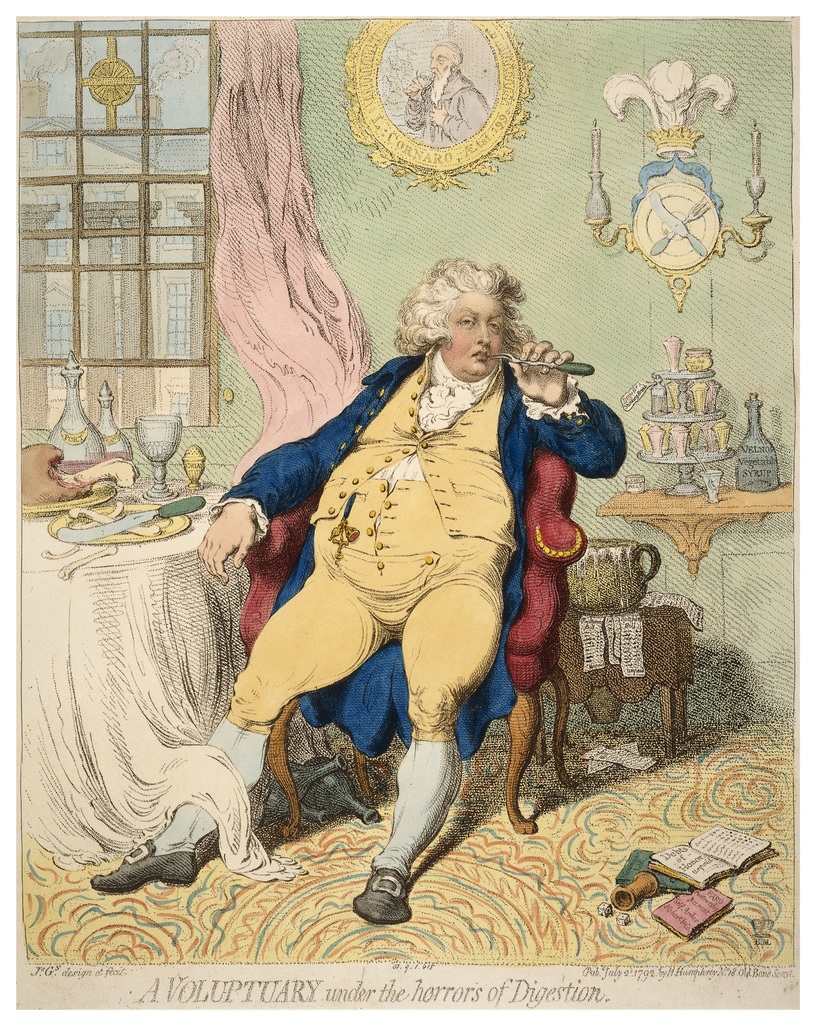 James Gillray (1756–1815), A Voluptuary under the horrors of Digestion, UK, 1792, etching and stippling with hand colour. © The Trustees of the British Museum