Can Graphic Design Save Your Life?

From neon pharmacy signs and the ubiquitous Red Cross symbol, to hospital infographics and sexual health pamphlets, medicine and graphic design seem to intersect at every turn. This unlikely convergence is under the microscope at Wellcome Collection’s newest exhibition, ‘Can graphic design save your life?’ – a question to which the answer, incidentally, seems to be a resounding ‘yes’.

Messages relating to human wellbeing are amongst the most important we can transmit, and effective graphics are unique in their ability to communicate in an instant, across barriers of language or illiteracy.

The show offers up more than 200 objects, divided into six categories and chosen to demonstrate the power of design when applied to various aspects of healthcare. Messages relating to human wellbeing are amongst the most important we can transmit, and effective graphics are unique in their ability to communicate in an instant, across barriers of language or illiteracy. Lucienne Roberts of GraphicDesign+ and co-curator of the exhibition elaborates: “The best design has nothing to do with making money, it’s about presenting information.” With information the order of the day, ‘Can Graphic Design Save Your Life?’ runs the gamut from contraception to epidemic control, ambulance liveries to drug packaging, and from the 16th century to the 21st. When you start looking, it’s everywhere; graphic design has probably saved your life a couple of times today already just in the form of traffic lights or ‘PLEASE MIND THE GAP’ signs on the tube. 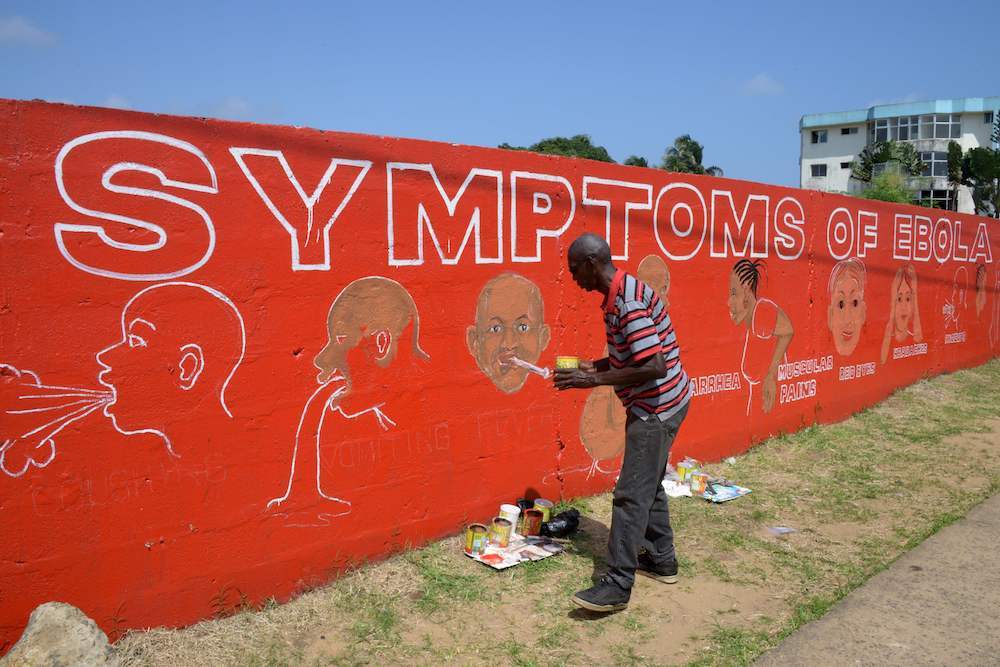 Now, you can lead a horse to water, and you can show a smoker hundreds of horrible pictures of cancer. Whether they react how you’d like them to is another issue entirely; still, there’s no harm in trying, and so we start our tour of the exhibition with ‘Persuasion’. This first area in the circuit deals in design ephemera related to smoking, i.e., advertising cigarettes and then hammering home their deadliness. It’s quite the pendulum swing. I’m ashamed to say that the first display case, housing two early packets of Lucky Strikes, made the whole endeavour look so cool that I was turned on rather than put off – incidentally, exactly what their 20th century designers were going for. 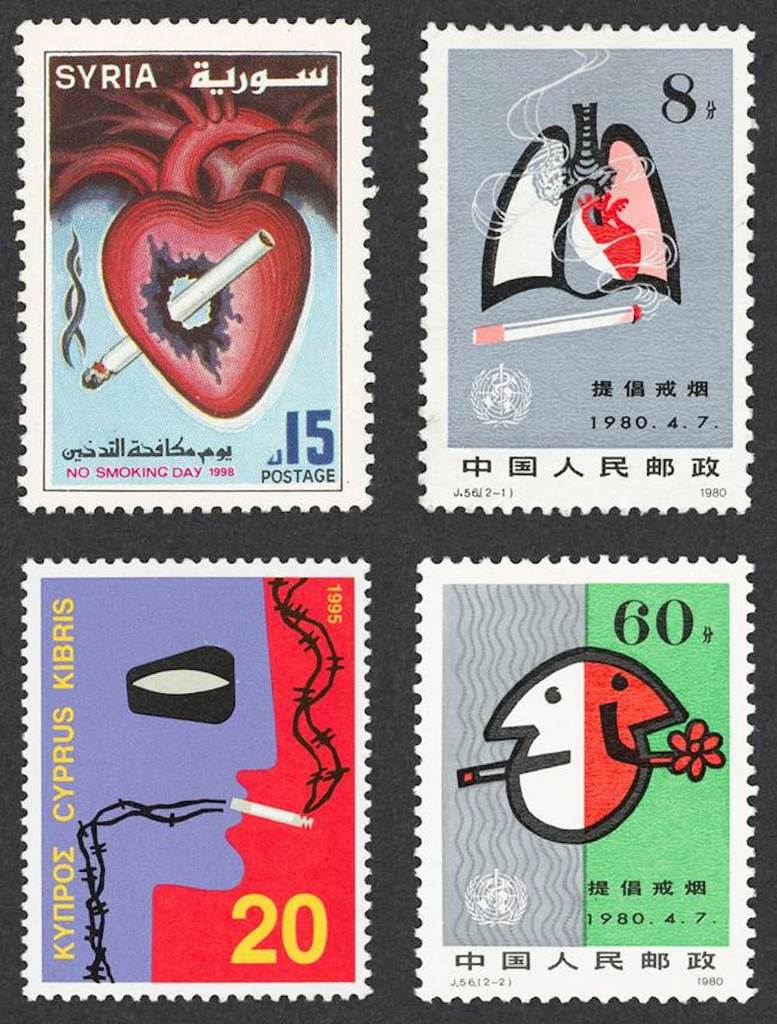 A collection of anti smoking postage stamps, various countries around the world.

Once upon a time, smoking was glamourous, ubiquitous – and heavily marketed, just like anything else profitable. In a kind of symbiosis with its creeping erosion, tobacco advertising has made some valiant attempts to embrace its bad-boy reputation along the way to total abolition. The residual association of smoking with creativity and hedonism has leant the cause some big-name benefactors – Saatchi&Saatchi’s (in)famous Silk Cut campaign, for instance, came in the late 80s after the first attempt at the regulation of cigarette packaging was instated by the government. Then came ‘Death’ brand cigarettes, available in the UK between 1991 and 1999, whose irreverent anti-branding appealed to the hedonist faction of the smoking cohort. There’s still something wildly compelling about the bald provocation of the skull-and-cross-bones on black, DEATH both threatened and sneered at by its inference. Smoking was still a viable lifestyle choice, however nihilistic, as recently as twenty years ago.

All change. As governments have assumed more responsibility for their citizens’ wellbeing, and as science catches up with human habits, smoking has become a self-inflicted leper’s bell. We freeze outside, pariahs in company, puffing away with defiant disregard for twenty-years-time or common sense; moving around the exhibition table brings us to articulations of this more familiar, contemporary attitude. Gone is the punk and the glamour, and in marches the antismoking postal stamp (functioning like a public poster in miniature), sleek banners promising that Smart Women Don’t Smoke and another featuring a turtle: ‘SMOKING IS SLOW MOTION SUICIDE’. 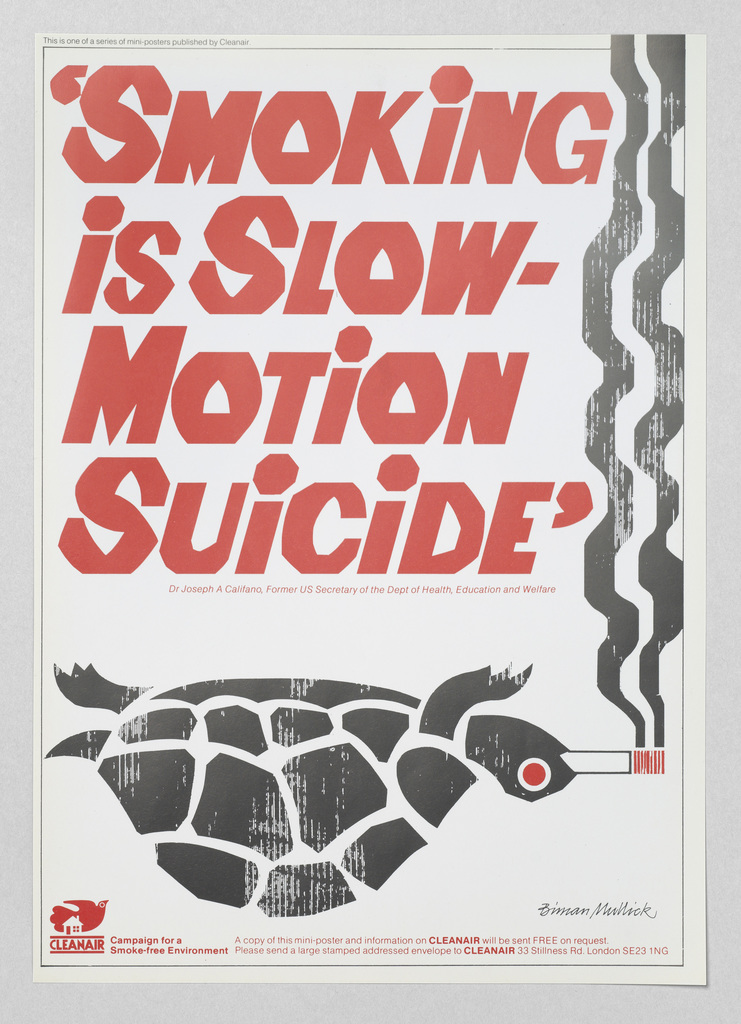 While it’s one thing to look at graphic design from past decades – a pleasure to see how styles have or haven’t changed, the tone of messaging evolved – it’s quite another to see objects behind glass which you (I) might (do) have in a handbag, today. As UK smokers know, all cigarette cartons are now printed in the same matt dark green (famously focus-grouped as the least appealing colour the government could muster – a kind of design veto) and plastered in variably horrifying images. Cigarettes are no fun anymore, but seeing anything contemporary and quotidian in the context of an exhibition makes you realise how much graphic design is all around us, absorbed unthinkingly. After all, these visual arrangements don’t self-generate – “graphics does not exist on its own”, says Roberts. There’s a designer’s hand behind each and every composition, but that’s easy to forget.

Cigarettes are no fun anymore, but seeing anything contemporary and quotidian in the context of an exhibition makes you realise how much graphic design is all around us, absorbed unthinkingly.

‘Persuasion’ articulates two facets of one issue in a way that other sections of the exhibition don’t, which makes it uniquely apt to illustrate the messy influence of human agendas on design. Obviously, the tobacco lobbies want people to buy; the NHS wants people to quit. Whilst the areas dedicated to ‘Contagion’, or ‘Hospitalisation’ don’t feature their own counter arguments (after all, what could they possibly be? “Don’t worry about spreading Ebola”?), they still embody an aim. The objectivity of a term like ‘information’ elides the subjectivity inherent even in what might seem like incontrovertible good sense. ‘Medication’ features pill packaging – the gorgeous minimalism of TEVA’s blocky geometric shapes on white, and the delicate cross-hatching of Bayer’s 1939 Aspirin boxes.

However helpful the pills beneath the graphics might be, though, we mustn’t forget that they are designed to sell as much as to cure. Morality rears its head in ‘Contagion’ too, a section which features a 1941 poster proclaiming “PROTECT YOURSELF AGAINST MOSQUITOES. YOU OWE IT TO YOURSELF, YOUR COMRADES, YOUR EFFICIENCY.” Of course, no one wants Malaria. Of course, the British army wants its men fighting fit – but that’s not purely out of a friendly concern for their comfort. Rather, it’s an objective inextricably linked to economic, strategic and military goals. There are two sides to every coin (however aesthetically pleasing a coin it might be.) 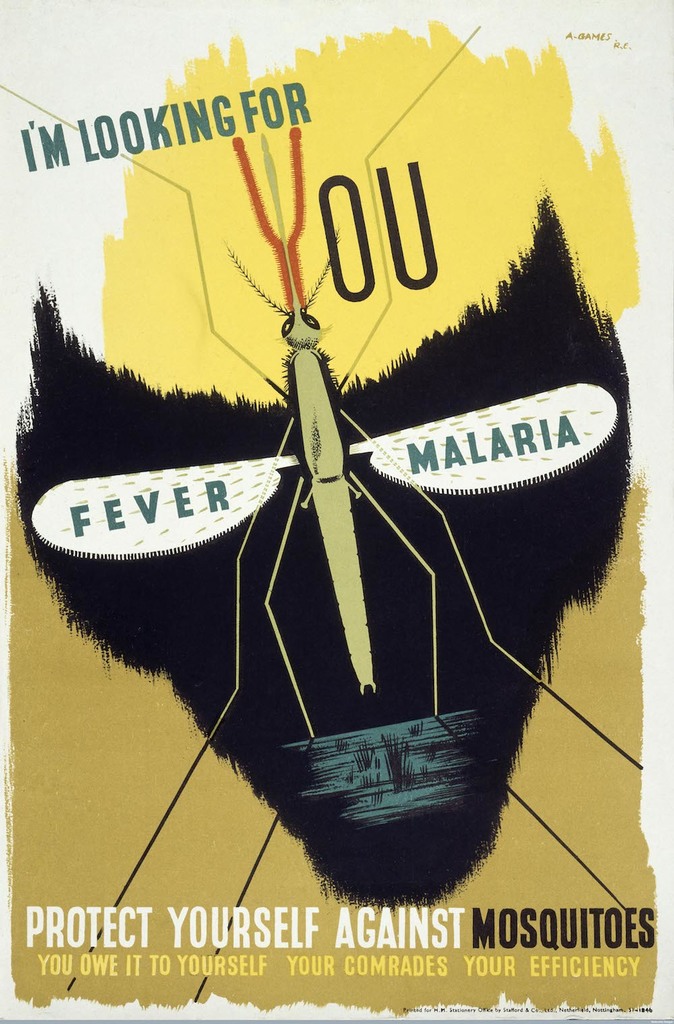 The malaria mosquito forming the eye-sockets of a skull, representing death from malaria, 1941. © Estate of Abram Games

Ephemera from the British Government’s anti-AIDS campaign tread a similarly ambiguous moral line. When the disease broke out in the UK in the 1980s, there was initially a sense of complacency amongst the snug middle classes – after all, the demographics hit hardest were initially gay men and intravenous drug users, relative minorities who were already subject to harsh moral judgment from mainstream society. Indeed, the idea that AIDS was some kind of punishment sent from on high, or a fitting reward for transgressive behaviours, proliferated; the then-Chief Constable of Greater Manchester Police, James Anderton, referred to victims "swirling about in a human cesspit of their own making", and some newspaper headlines literally dubbed the crisis a ‘gay plague’. Trouble is, HIV doesn’t discriminate like the British public does, and so the Government had quite a job on their hands to convince the country at large that they were just as susceptible to the virus as anyone else.

At Wellcome Collection, there’s the famous tombstone – AIDS. DON’T DIE OF IGNORANCE – used for a nationwide television campaign and beamed into every home in Britain during 1987. Part of a larger initiative encompassing billboards, leafleting and apocalyptic overtones, the scheme worked – in fact, it was so successful that it was imitated all over the world. Condoms got cool (quite a feat, if short-lived), and there’s a whole cabinet dedicated to their numerous iterations – not only since the 80s but further back, too. Much of the packaging is rather beautiful; some are wrapped in gold foil and delicate tissue paper, others niftily folded away in enamel tins. The best cure is prevention, after all, but the condoms – like the cigarettes – reveal just as much about societal attitudes over time as they do about the history of design.

At Wellcome Collection, we see graphic design used for good; outside the gallery, we must remember that its power can be applied to any motivation at all. 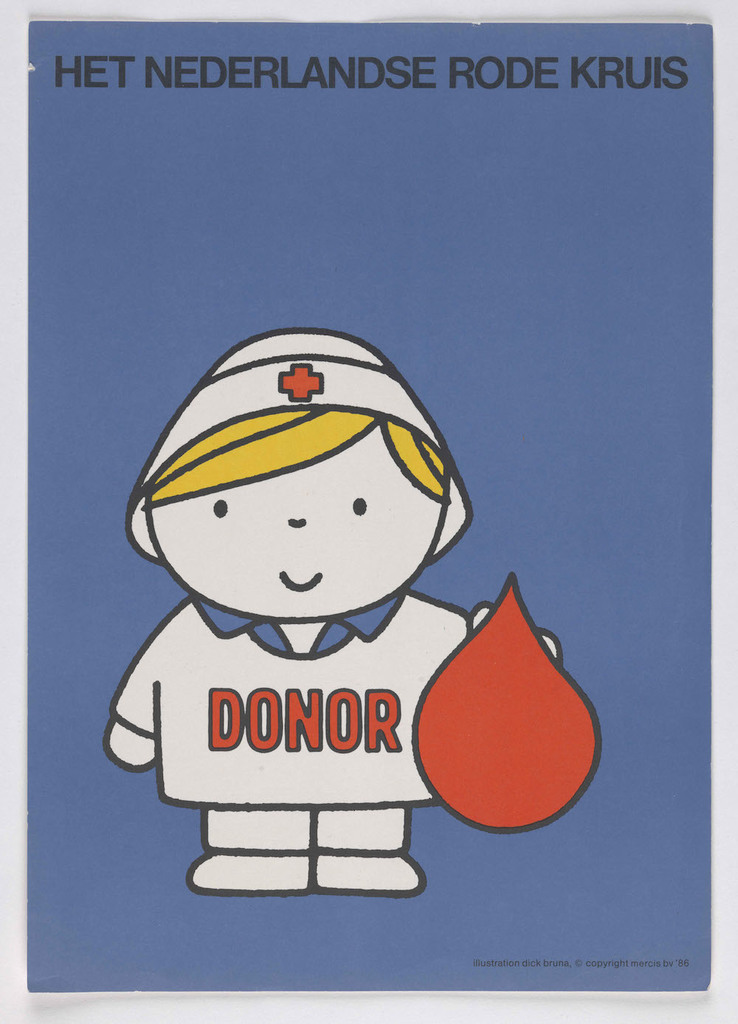 Graphic design can save your life in many ways, some more obvious than others. An infographic alerting you to the signs of a stroke, or advising against unsafe sex, might do so directly. There are more insidious means, however, by which graphic design shapes our collective experiences: the food we eat, the brands we trust and the causes we support are more informed by slick marketing than we’d like to imagine. The power of taking design out of the equation in the case of new cigarette packets should be testament enough to its influence. At Wellcome Collection, we see graphic design used for good; outside the gallery, we must remember that its power can be applied to any motivation at all.

In 2017, Plinth has partnered with Wellcome Collection to produce a new range of merchandise. Marrying Plinth’s expertise in art and design with Wellcome’s commitment to medical research and human wellbeing, the products explore the intersection of these two spheres – the immediacy of visual communication, and the designs which guide us all through the world.