Have you seen Homecoming? Have you seen the high priestess casting spells across an audience of thousands and felt these incantations pass through a camera, a monitor, and land on your screen-lit skin? Beyoncé’s Homecoming is an incredible feat, one which seeks to pull black history and culture on to the world stage – with enough force to make up for its woeful absence from a western canon.

As well as black performers on stage, the show and documentary are both peppered with past work of black activists and intellectuals; Beyoncé is asserting a canon, not a festival line up. 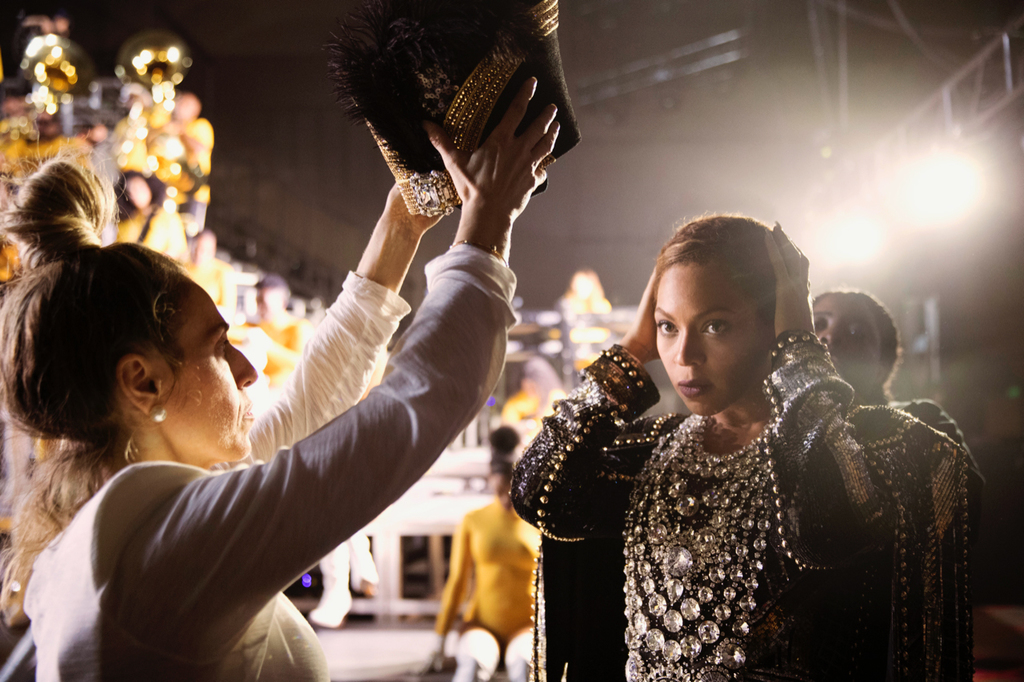 Homecoming is a title with plenty of depth. The name of Beyoncé’s headline act at 2018 Coachella – in fact, the first black woman ever to play the prime slot – Homecoming nods to American high schools, but also to a more profound reframing of the African American story (if such a thing exists in the singular). The home to arrive at, in this interpretation, is neither America nor Africa – rather, the dizzying heights of Being Taken Seriously. For a demographic whose ancestors were ripped from homes in a continent their descendants might never visit, who live now in a land where they are still the victims of systemic prejudice and violence, the notion is a powerful one. Home? Home is made of stories and heroes, and of history: for a people who have had theirs robbed, or been robbed from theirs, Beyoncé’s 2-hour documentary and the Coachella performance itself might salve one aspect of that trauma: representation.

The 2018 performances (there are two), and the footage of them in the documentary, saw Beyoncé on stage with as much black brilliance as she could fit there. 64 credited musicians, easily as many dancers and a bevvy of guest appearances (Michelle and Kelly for a Destiny’s Child number, sister Solange, husband Jay Z) see the production full to bursting with black bodies; black music; black talent. The feeling, both watching the performance and listening to Beyoncé talk about her creative decisions in the film’s voiceover, is that she has assumed a kind of ambassadorial mantle. Rather than resenting the pressure on her to be anything so dull as a role model, she has concertedly leant into her influence with an agenda extending far beyond making pop music. As well as black performers on stage, the show and documentary are both peppered with past work of black activists and intellectuals; Beyoncé is asserting a canon, not a festival line up. 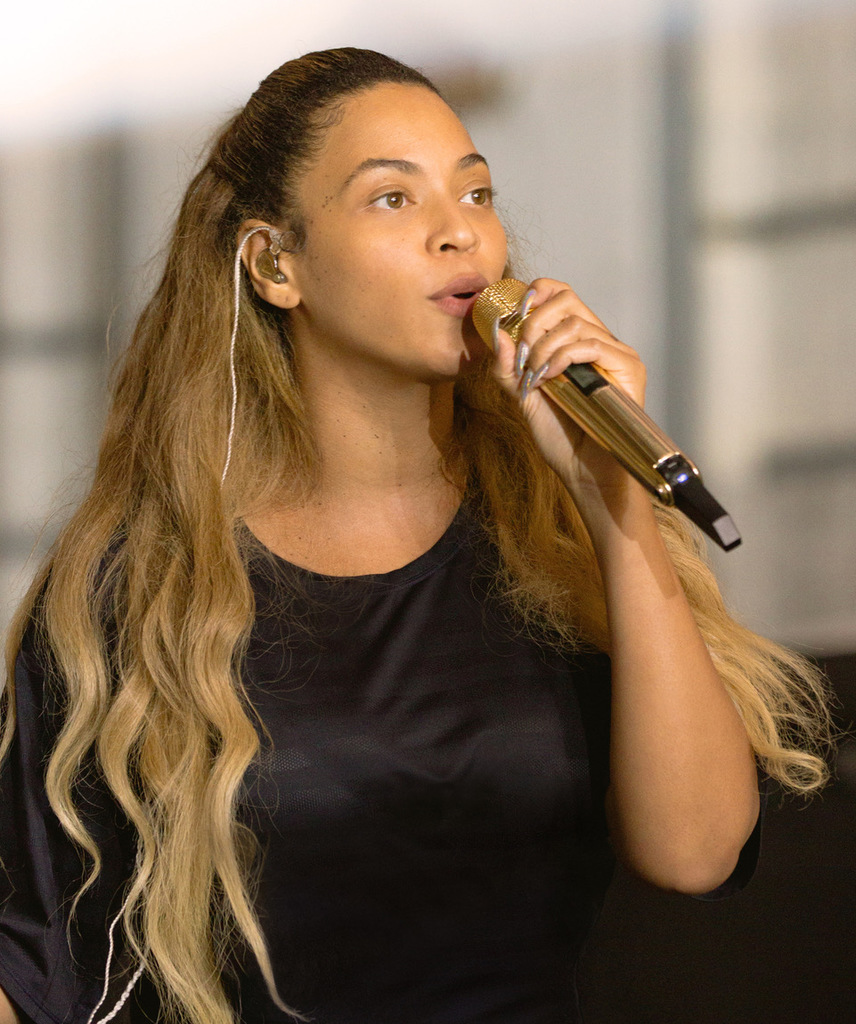 [...] to me we are the most beautiful creatures in the whole world, black people. And I mean that in every sense, outside and inside.

Tessa Thompson, Danai Gurira, Malcolm X, Chimamanda Ngozie Adichie, Toni Morrison, W. E. B. DuBois and Audre Lorde (to name only a selection) each lend a quote on screen or as a voice-over. Here’s the history component of the Home in Homecoming, then – shoulders to stand on and work to build on. Let’s get in formation, foundations in place, and what next? You! As Queen Bey herself explains, ‘it was important to me that everyone who had never seen themselves represented felt like they were on that stage with us.’ Over the course of the documentary – more than 2 hours long, by the way; this is no wispy promo video – we learn that Beyoncé hand-picked every dancer and musician. She explicitly states that she wanted to echo her black audience squarely back at them, to hold up a mirror to people who are accustomed to seeing themselves cast as a tired range of stereotypes and reflect power, beauty and empathy. Even the costumes were, it seemed, a nod to the inherent value of an everyday story: at times, Beyoncé’s male dancers are wearing hoodies and baggy pants (spangled and tailored, sure). They might wear the same combination to work; to the corner shop; on the school run. Then, several of Beyoncé’s own costumes are similarly riffing on street clothes: a big jumper and high boots, denim shorts and a jacket. Again, spangled and tailored – this is Coachella, and this is showbiz. Still, her audience are being given every prompt Beyoncé can muster to see themselves on stage with her.

This isn’t new, as a creative direction, for Beyoncé. The most recent few years of her career especially have seen undeniably slick and strong bids to get black bodies into new contexts; think of Warsan Shire’s visceral poetry for Lemonade – or the 2018 music video for APESHIT with husband Jay Z, where they fill the Louvre with forms largely absent from its frames. They couldn’t have sourced a venue more loaded with cultural and literal capital to intervene on. Crucially, too, no one else would have been let in. Beyoncé has, by one means or another, become big enough to exist largely outside the prejudice which keeps most people who look like her – in America and beyond – on the back foot. She’s not missing the opportunity to pull her brothers and sisters up the ladder with her: on the contrary, she is insisting on it. 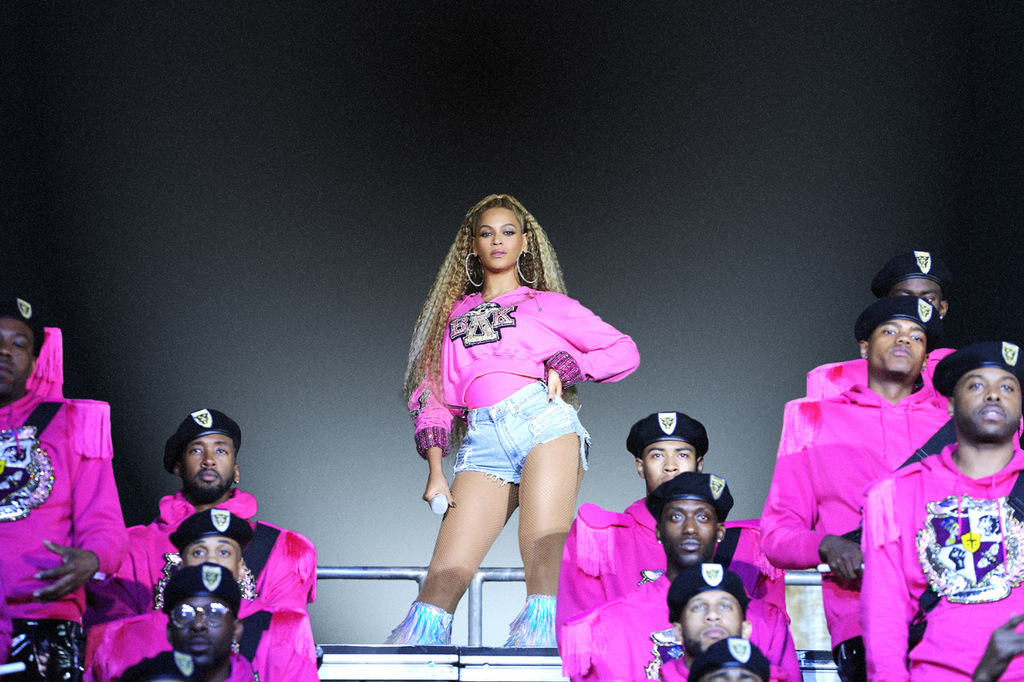 Subject to the hysteria of stardom, Beyoncé’s lessons land with the potency of spells. In a rendition of Sorry, there’s a moment where crescendos crash quiet for its last and most famous line. Its singer takes her time: ‘He only want me when I'm not there.’ Pause. Acapella. Audible inhale – we know what’s coming. ‘He better call Becky with the good hair’. Beat; and again: ‘He better call Becky with the good hair.’ The camera shoots to the crowd, entranced and mouthing along. She leads a chant: strength in vulnerability, in allowing anyone sat waiting for a lover to come home (and knowing that they won’t) to identify with this supra-human human. Anyone who has been passed over; underestimated; forsaken. This is the ultimate kind of representation, bigger than any mass of mirror bodies: I feel like you feel, and I am thus understood.

This is the ultimate kind of representation, bigger than any mass of mirror bodies: I feel like you feel, and I am thus understood. 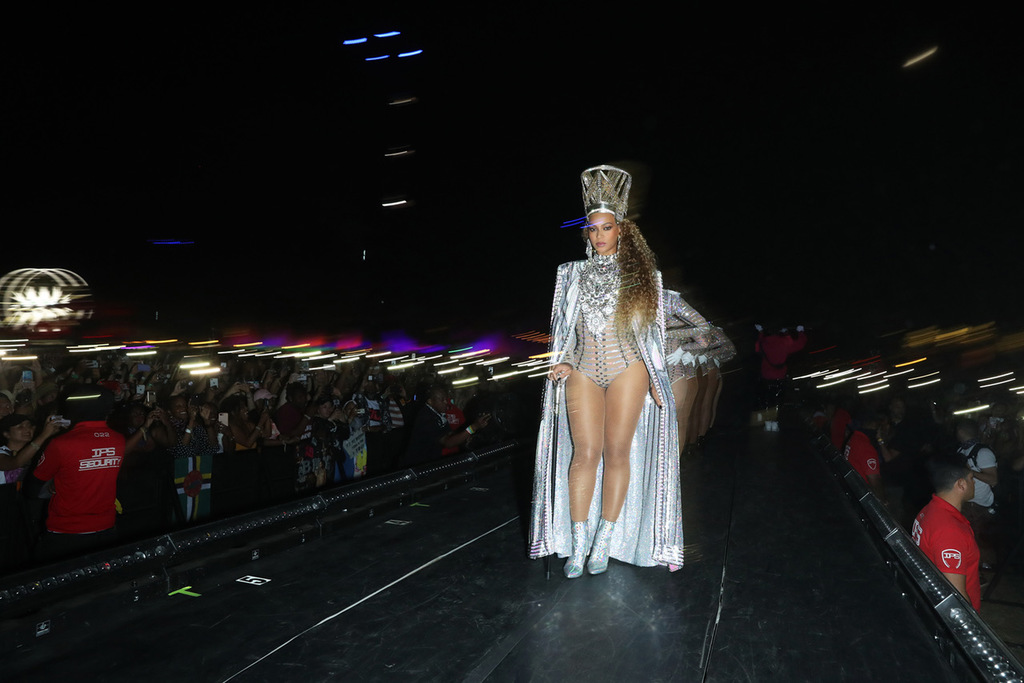 To end at the beginning – the documentary’s opening sees Beyoncé use audio of Nina Simone. I’d like to give her the last paragraph: “I think what you’re trying to ask is why am I so insistent upon… giving out to them that blackness, that black power, that BLACK pushing them to identify with black culture; I think that’s what you’re asking. I have no choice over it; in the first place, to me we are the most beautiful creatures in the whole world, black people. And I mean that in every sense, outside and inside. And to me we have a culture that is surpassed by no other civilization but we don’t know anything about it. […] My job is to somehow make them curious enough or persuade them, by hook or crook, to get more aware of themselves and where they came from and what they are into and what is already there, and just to bring it out. This is what compels me to compel them and I will do it by whatever means necessary.”