Arithmetic and The Ballad of Buster Scruggs

Who knew that the world needed a cowboy splatter musical, and that it would be the funniest thing of 2018?

The Coen brothers' latest offering, The Ballad of Buster Scruggs, is made up of six short Westerns of varying length. The linking conceit is that they’ve been collected in an old green book, and we’ll be leafing through the stories one by one — a framing device that makes me think of Jiminy Cricket’s ‘Pinocchio’ book, covers opened on a story pool to dive inside. Before each chapter, we get a glimpse of a coloured-plate: an illustration of a scene from the short film to come. These flash-forwards are an elegantly dirty trick. The Coens are excellent at giving us 2 + 2, but never 4, and these plates are the first piece of the puzzle; a bare-faced dare. Make some meaning, and watch it disintegrate.

The six Westerns are kind of like tumbleweeds blowing between their own fertility and desolation. 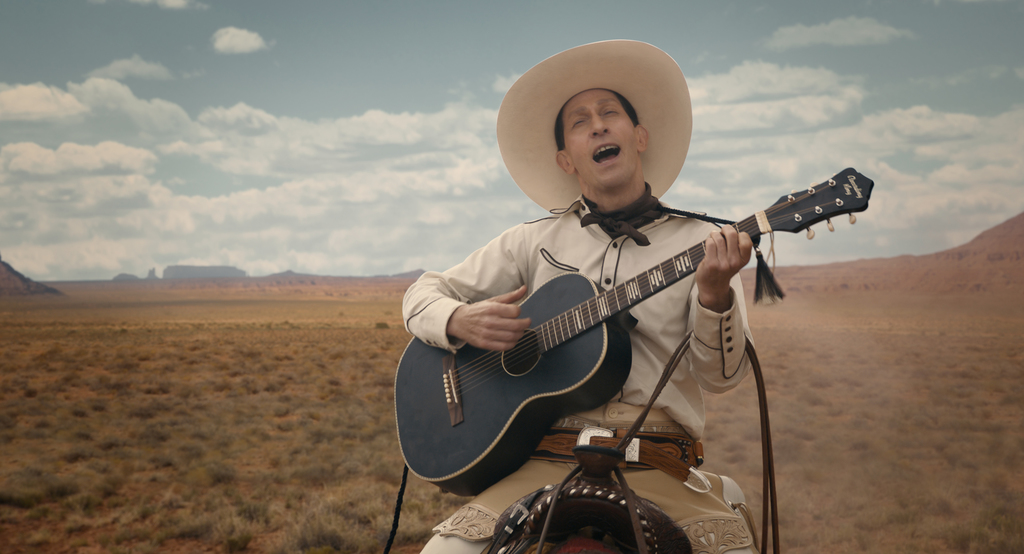 Open on a vast and arid land — that familiar, alien frontier. Gradually zero in on a man on a horse: he’s a dandy in spotless ivory duds with a guitar, singing a mock-melancholy ballad into camera. So: (2) a harsh wilderness that promises brutality, plus (2) Buster Scruggs, a high camp crooner, trilling away like he’s on primetime TV. We make from the absurd non-sequitur of setting/character a strange, subconscious alchemy of the two westerns of ‘Western’ and ‘country and western’, and it’s hilarious (= 4). Soon, the echoes off the slopes of the barren valley are providing baritone back-in vocals. A shot from the perspective of the guitar’s sound hole is arty-on-purpose, and seems to say: the following six films are going to be as absurd or profound as you want them to be. Often, dissonance (felt in the absurd meaninglessness of life) and consonance (felt in the mythic lustre of imagery and events that seem to exist in a world of story alone) ring out in an impossible chord. When Buster steps into a bar and pats himself off, an outline silhouette of dust hangs in the air behind him: it’s a hyper-real moment of cinematic joy, a premonition of ghosts and ghostliness tempered by cartoon slapstick.

The six Westerns are kind of like tumbleweeds blowing between their own fertility and desolation. You’re never quite sure whether the next headshot will be occasion for laughter or horror. Lives are cut short, often with hat-tip irony and cruelty — but we’re invited into the game, so long as we pay a bit of attention. After James Franco’s character has robbed a bank, and is being assaulted by the bank-teller (who’s wearing pots and pans as armour) he calls for his horse to come and assist him. The animal ignores his cries, and so we have a good understanding of the cowboy’s relationship with his horse when, a little later, he’s tied up on top of it. A rope has one end around his neck, the other attached to the branch of a tree. The horse is eating tufts of grass, grazing further and further from the tree until the noose is taut, and the cowboy can barely breathe an ‘Easy now’ to his oblivious, not-so-noble steed. Throughout the six films, the tension between comedy and horror is as taut as that rope. 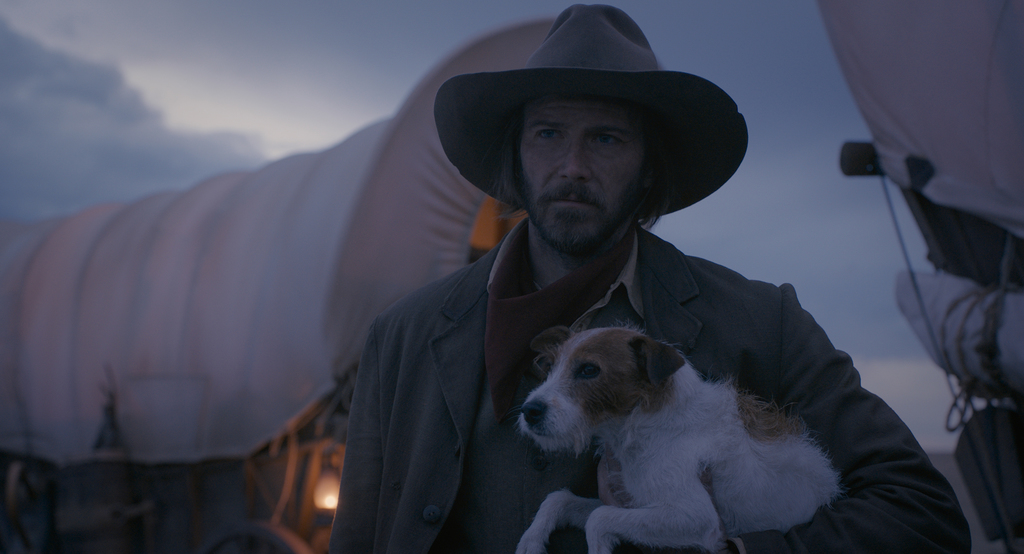 The third instalment presents us with another absurd puzzle, and the tone takes a turn for the desolate. We’re with a wagon crossing the wilderness to the rhythm of a wearying snow. Upon reaching the next Nowheresville, an impresario (Liam Neeson) remodels the back of the wagon into a miniature stage. The locals roll up barrels to use as makeshift seats, and the curtains open on a younger man with no arms or legs, who performs speeches, ‘My name is Ozymandias, king of kings’, for one. The tension here is in the relationship between the pair; we follow them across the edge of civilisation, putting on show after show to ever-dwindling audiences. The character we’re really watching perform, however, is Liam Neeson’s: what story has he told himself to justify his exploitation of the younger man? Is the act of feeding his star performer around the campfire before he feeds himself genuine tenderness, or just an act? The uncertainty is pitched just right. 2 + 2 should equal… remind me?

The Ballad of Buster Scruggs suggests that all we have is theatre; stories. You make your own meaning in this world: let’s have some fun while we write it. 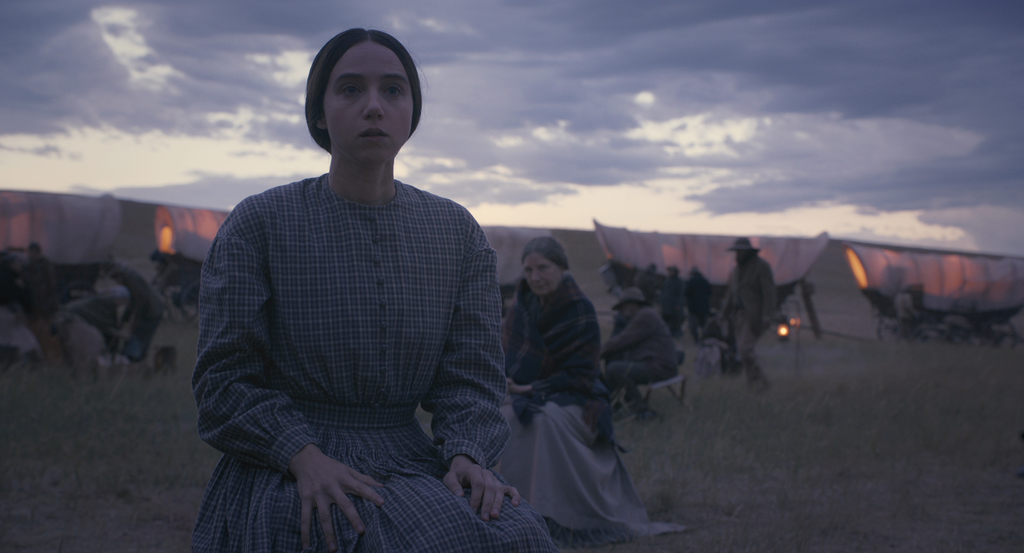 ‘Uncertainty’ – says one of the characters in the longest of the six episodes, “The Gal Who Got Rattled” – ‘that is appropriate for matters of this world […] Down the ages from our remote past, what certainties survive? And yet we hurry to fashion new ones, wanting their comfort.’ It’s one of several moments which directly reference the game we will have found ourselves playing. The only certainty, Ballad of Buster Scruggs seems to suggest, is that we must die – after all, one cowboy after another meets their grisly end before our eyes. The take-away, though, is more cheerful than the lesson; there’s a lot of pleasure to be had in making meaning of this life in the meantime. When we step into a Western, we enter a world of ‘frontier justice’ dispensed by judicial and extra-judicial killings, each as brutal as the other. Cowboys — like knights before them — gallop from place to place bound by no fixed societal structures but by an innate code of honour. Westerns have always been convenient theatres to throw into question a contemporary world order. Here, on the other side of the screen, the overriding fiction is that we know right from wrong. The Ballad of Buster Scruggs suggests that all we have is theatre; stories. You make your own meaning in this world: let’s have some fun while we write it. 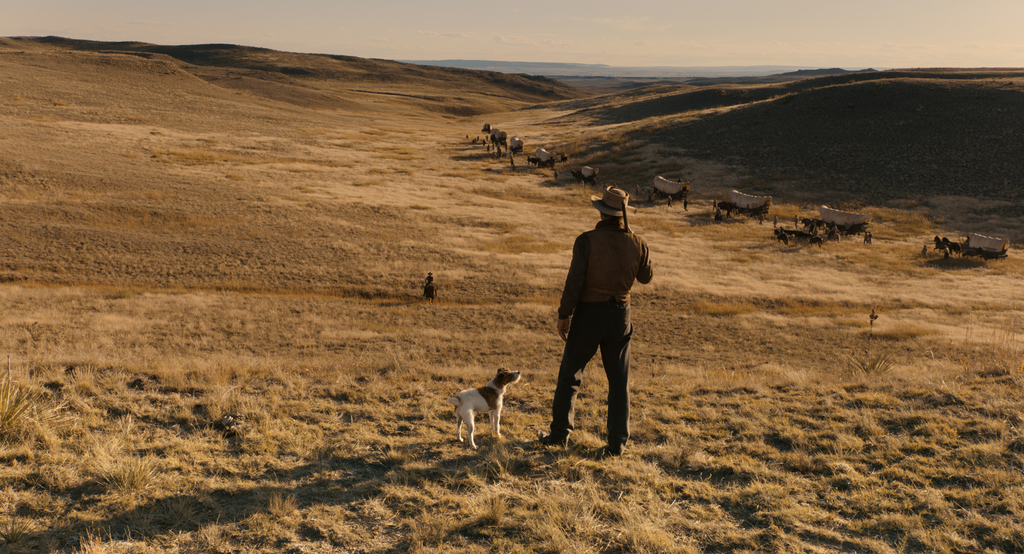