Nadia Fall marks her tenure as artistic director of Stratford’s Theatre Royal with the raw, compelling tale of Lope de Vega’s Fuente Ovejuna. Perhaps chosen in homage to Joan Littlewood’s legacy of revolutionary theatre (Littlewood staged the 17th century classic here in 1955), this time around the audience are thrown into the trials and tribulations of modern-day India; witness to the brutal story of a small town terrorized by a corrupt policeman. And there’s no better setting for the lawless plot than Uttar Pradesh: the behemoth landmass spilling east of New Delhi that engulfs the cities of Lucknow and Agra. Home to more than 200 million Indians, agricultural Uttar Pradesh is marked by rampant poverty, mass illiteracy and heinous, repetitive acts of violence against women. Force and intent are the marking themes of April De Angelis’ masterful adaption, succinctly named The Village.

The auditorium resonates with the powerful beat, the audience’s faces reflect the crimson, corporeal glow emanating from the stage. 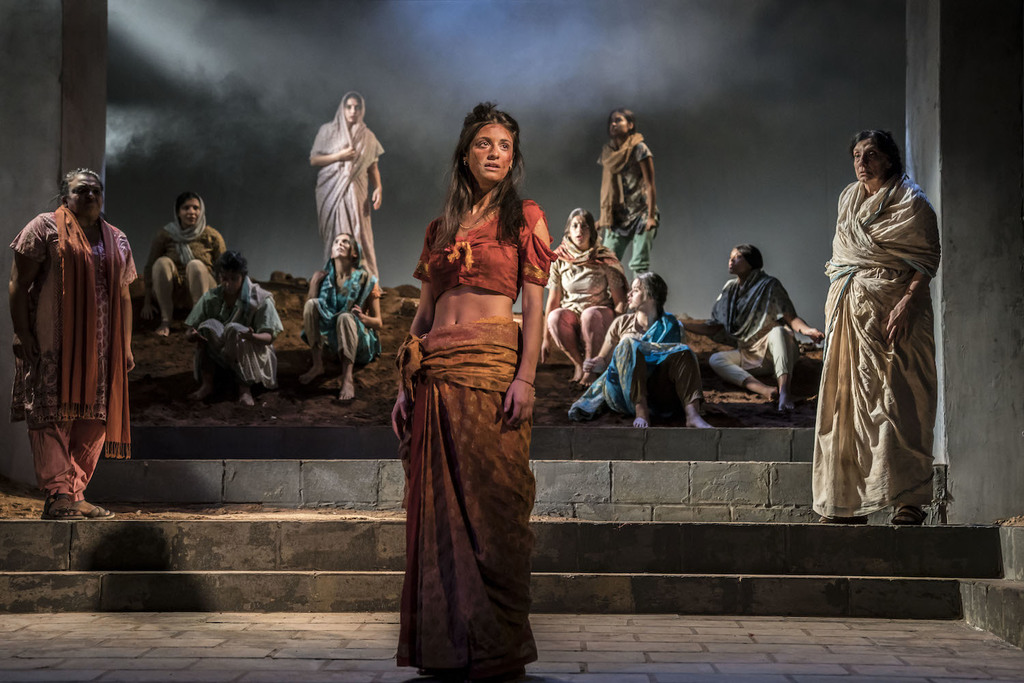 Indian drums rap out a deliberate rhythm, their bassy timbre foreboding. The auditorium resonates with the powerful beat, the audience’s faces reflect the crimson, corporeal glow emanating from the stage. This is a performance that fires up the senses and conjures forth emotion from a deep-rooted place. The percussive heartbeat elapses and two policemen burst onto the stage. Their suited-and-booted, swaggering arrogance announces their inexperience louder than the brash, boastful words tumbling from their mouths. These are the Inspector’s men: machismo, testosterone- fuelled youths who slaver like dogs over the power-hungry heels of their master. In one short scene, they tear through the play’s hefty subject matter: trembling democracy, political greed, deep-seated misogyny. It is startling how directly applicable the 17th century plot is to contemporary politics. The script takes aim at the far-right politics of Putin, Trump and Modi in its scathing presentation of a world post-truth, described euphemistically by the young policemen as “alternative truths.” The chime of rhyming couplets are, if not a surprise, a playwright’s adroit device that keep the play afloat amidst the storm of its challenging content. 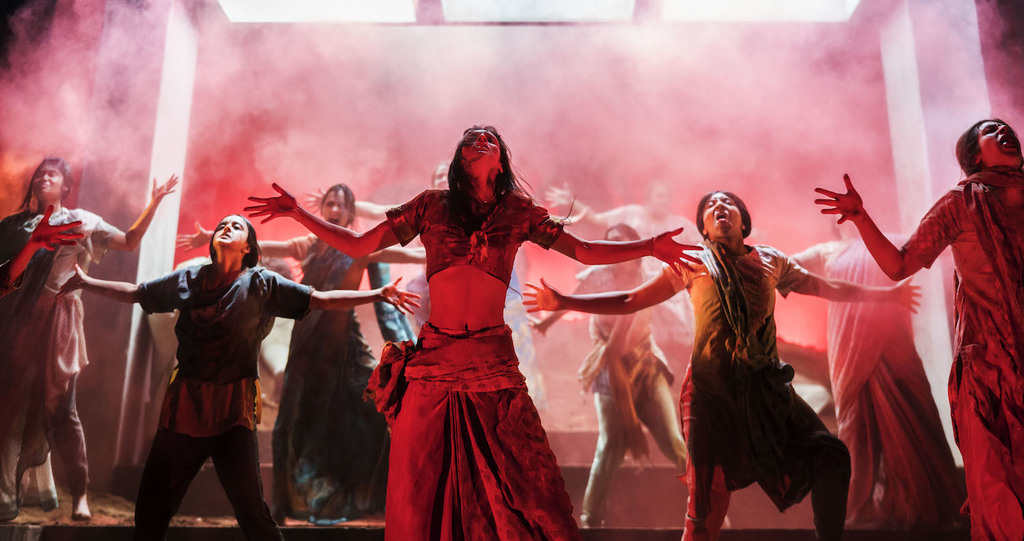 It is in the character of Inspector Gangwar, played by Art Malik, that the performance’s most chilling elements emerge. Intimidating and morally warped, Gangwar is in cahoots with the ruling BJP party; yet, his self-serving agenda – to have forceful sex with every woman of the local village Sahaspur – is driven by a more sinister political intent: “to cleanse Hindustan of the Muslim pest.” Referring to India as “Hindustan” is telling: the play casts a caustic judgement over Modi’s demagogic politics that continue to inflame divisions between Hindus and Muslims in India to this day.

Islamophobic hate speech is later directed at the character of Farooq, a local boy from the village of Sahaspur who is in love with the play’s quick-witted protagonist, Jyoti. Fall’s staging hits home: audience support for Farooq is instinctive, as is the explosive sentiment of outrage when the romance blossoming between Farooq and Jyoti is shattered by Gangwar’s sexual predation. The Islamophobia that simmers on the surface of every scene is both a bloodcurdling throwback to the India of 1947 and a reminder that this is Hindu-majority Uttar Pradesh, so densely populated that is has the capacity to change the outcome of elections. “Win the state, win the country” rings in the audience’s ears as the political game of chess, the villagers pawns, plays out on stage. A panel cuts the stage in half at intervals, symbolic of the geographical leap from Sahaspur to New Delhi - the chasm between privately educated politicians and the daily toil of peasants in small town India. Fall’s effortlessly constructed stage set starkly presents a political system so rigged by personal ambition and toxic nationalist rhetoric that we could just as easily be in Bolsonaro’s Brazil – or Trump’s America.

The play’s protagonist is deliberately named: Jyoti Singh was gang raped and murdered on a Delhi bus in 2015. 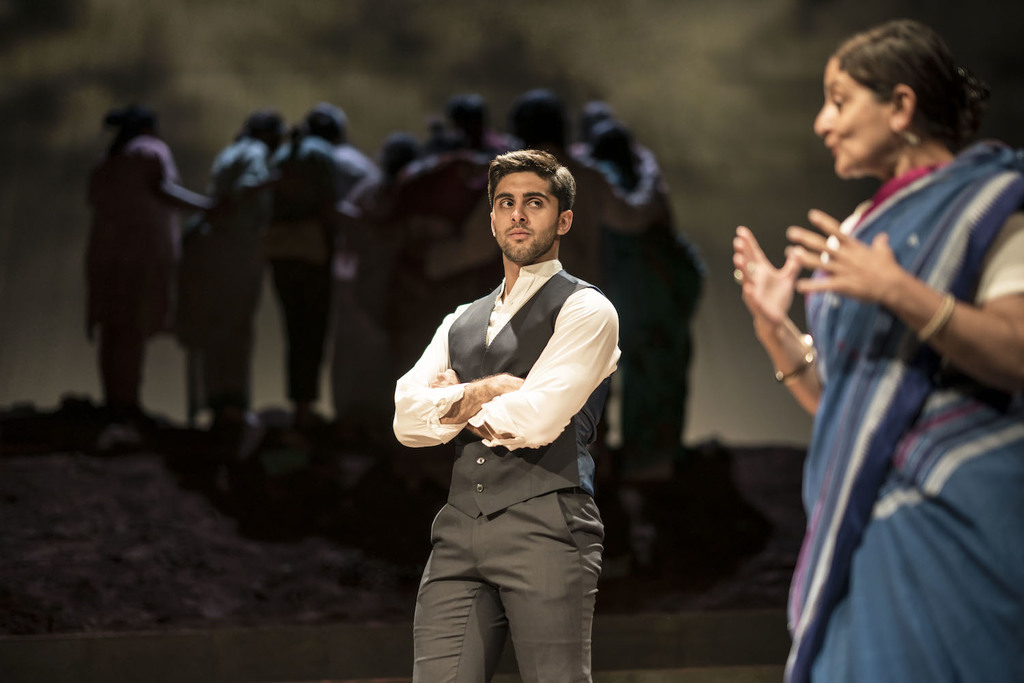 Repulsively strutting about the stage like a puffed-up peacock, Gangwar brags about his multiple rapes. The crowd’s booing when Malik takes his bow is a testament to the strength of his act. Coupled with Gangwar’s aggressive anti-Muslim sentiments, scenes from The Village draw on the shocking number of rape cases that have shaken India in the past five years.

The play’s protagonist is deliberately named: Jyoti Singh was gang raped and murdered on a Delhi bus in 2015. The Kathua rape case in January this year saw an eight-year old Muslim girl abducted, repeatedly sexually assaulted and asphyxiated as part of an attempt to drive her Muslim Bakerwal tribe from the area of Jammu and Kashmir. Yet it is when a furious Gangwar interrupts her wedding to drag Jyoti away that Fall’s play shrieks the loudest with injustice. Jyoti’s father freezes in his tracks, like a stunned rabbit, powerless to act against the tyranny of a man so rotten, with control so absolute. Here we are plunged once more into real life Uttar Pradesh, where a fifteen-year-old’s father was attacked and later died in prison when he tried repeatedly to bring a court case against a local politician for raping his daughter. A father’s helplessness to save his daughter chokes up even the most stoic of spectators; hearts were beating hard when the curtain dropped on act one. 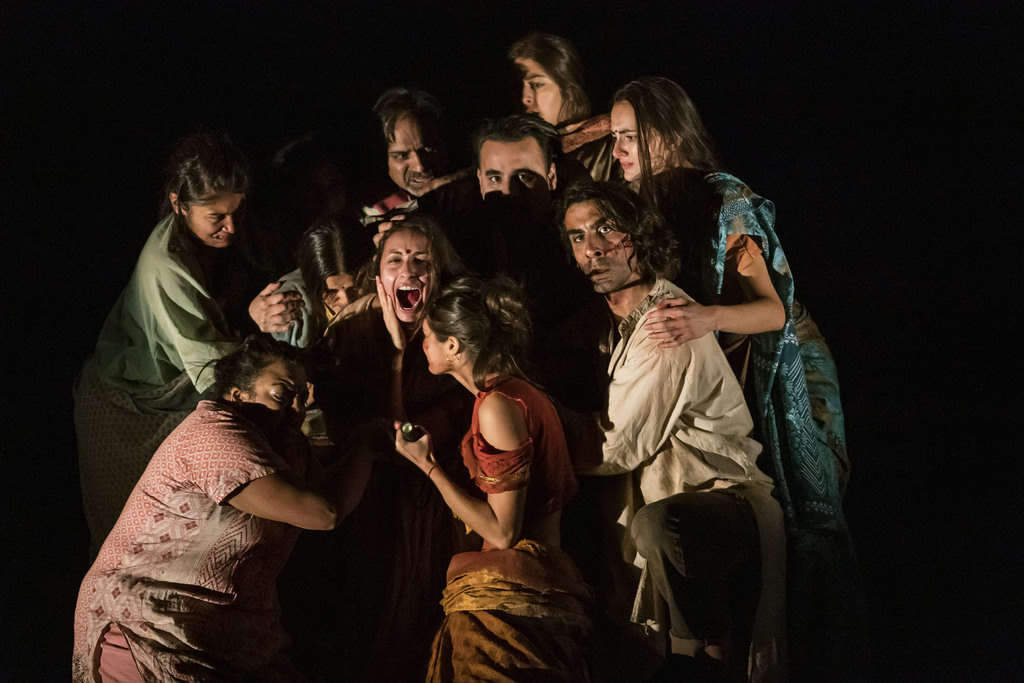 The use of rape as a political weapon crashes like a tidal wave throughout the play. Never has a stream of women, victim to the acts of untouchable, powerful men resonated more thoroughly than today. After all, the very fabric of American law-making is now to be stitched by Brett Kavanaugh, alleged serial sex pest whose position at the top was forced through by a political party who chose moral bankruptcy over losing.

It is during the opening of the second act that Anya Chalotra’s remarkable performance as Jyoti unfolds its wings, spurred on by the gritty defiance and raw pain of her rousing monologue. The women of Sahaspur exact their revenge, destroying Gangwar and finding their own #MeToo movement in a country whose governments overlooks them. While it is undoubtedly the synchronicity of contemporary events with the excellently written script that generates such a striking piece of theatre, Polly Bennett’s visceral choreography lends a helping hand to the deftly unravelled sequence of events. Angular Bollywood movements jerk through the bodies of the empowered women, subsuming the genre’s sensuous curves into the unstoppable force of the goddess Kali. Amidst lawlessness, a feeling of justice finally prevails. Reports of mass protests taking place around India in support of the women of Sahaspur parallel the storm of female activists that have taken to the streets of cities around the world in solidarity. The women’s reckoning provides a much-needed antidote to The Village’s brutal content. Through this scene, the play executes a U-turn; Fall orchestrates a spurt of optimism. 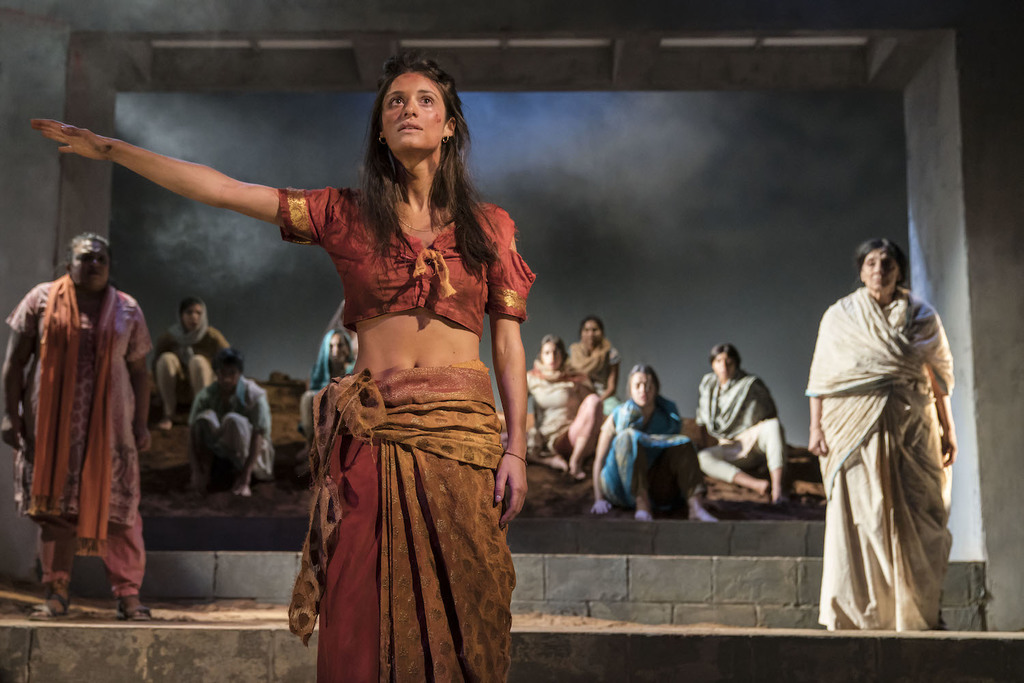 At once classical and electrifyingly modern, The Village is a play that sweeps the viewer up in its fierce assertion of justice, in a land where the rights of women and minorities are menaced. As the bedrock of democracy is slowly eroded by autocratic politicians and countless court cases that send seismic waves around the world, Nadia Fall’s firecracker of a play communicates a message just as powerful today as it was in Lope de Vega’s 17th century Spain: the unassailable need to hold power to account despite inflexible judiciary systems, perhaps now more than ever.