Hear your footsteps on another continent. Walk through the Hayward Gallery and the royal residence in Seoul at once. While Lee Bul’s Crashing at Hayward drew headlines for closing on its opening night — fish, glitter, fire — there’s plenty to see beyond the offending (now removed) artwork. Bul’s Bunker (M. Bakhtin) draws on the story and experience of Yi Gu, the grandson of South Korea’s last emperor, who was born while the country was under Japanese colonial rule and in the midst of a transition from monarchy to a republic.

Hear your footsteps on another continent. Walk through the Hayward Gallery and the royal residence in Seoul at once. 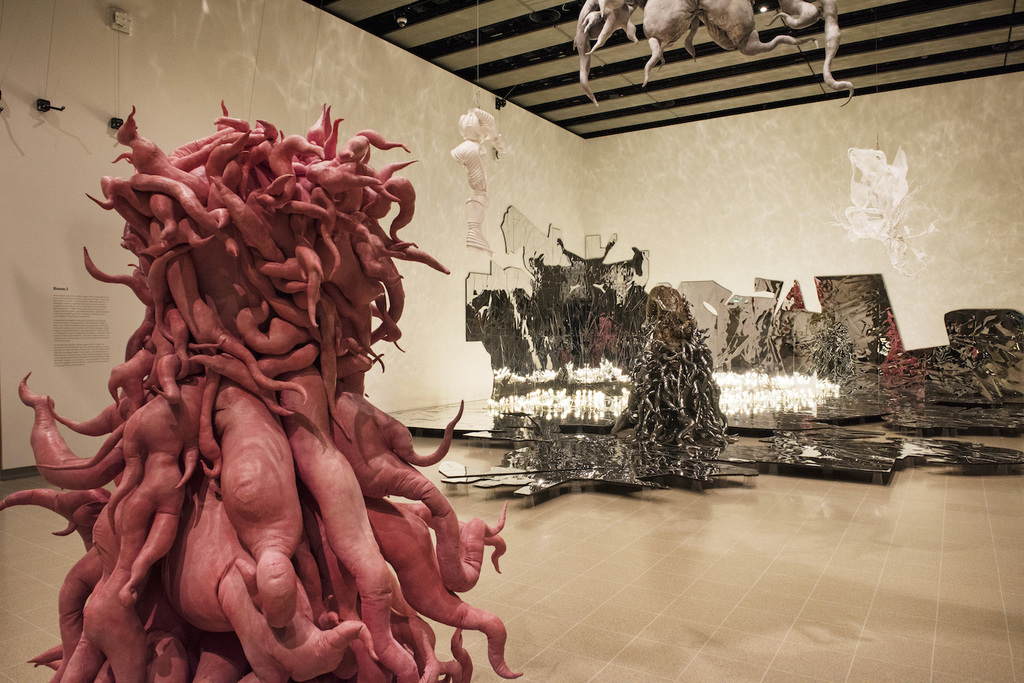 Yi Gu never ruled, but his heritage and circumstances were too tied to the country of his birth to make living there a possibility once the royal family were displaced. After studying in Tokyo, he spent his college years in the USA, studying architecture at MIT and eventually marrying an American woman. After decades in and out of his home country, he hoped to return permanently to Korea in 1996, towards the end of his life. Unable to adjust to a country so different to the one he had known as a child, he flitted between Japan and Korea before dying in 2005 at the Akasaka Prince Hotel: the building which had once been Kitashirakawa Palace, and the place he’d been born 73 years earlier. Gu’s erratic trajectory ended where it began, and the circle closed; his life serves a neat analogy for the artist’s response to a state in political flux, zooming in on one life amongst millions to illustrate a shared experience and hinting at the (thinly) veiled threat which hovers anew across South Korea’s border. .

Mikhail Bakhtin, who gives Bul’s piece half its title, argued that identity is not fixed – rather, it is defined by our relationship to the world around us. In a cave-like sculpture whose surface alternates between the jagged forms of mountain rocks and utilitarian military architecture, Bul invites us to be influenced by an environment composed of fragments; the visual and tactile come from the South Korean landscape she remembers from her home town, bunkers against rugged ranges. The aural component is delivered by headphones, which process the sounds of our own footsteps (or any noises we might make, in Bakhtin’s bunker) and deliver them through filters recorded at sites of interest from Yi Gu’s life: the place where he was born and died, Disneyland, the Monsanto House of the Future. Bakhtin’s formula is hijacked, disrupted and transferred from one person to another like a recipe for a salad applied to a casserole. We are made of what we have seen and where we have been; now you are made of what made Yi Gu. The inside of Bunker is mosaiced in shards of mirrored glass, reflecting back bits and pieces – rather than the whole – of what you are, or he was. 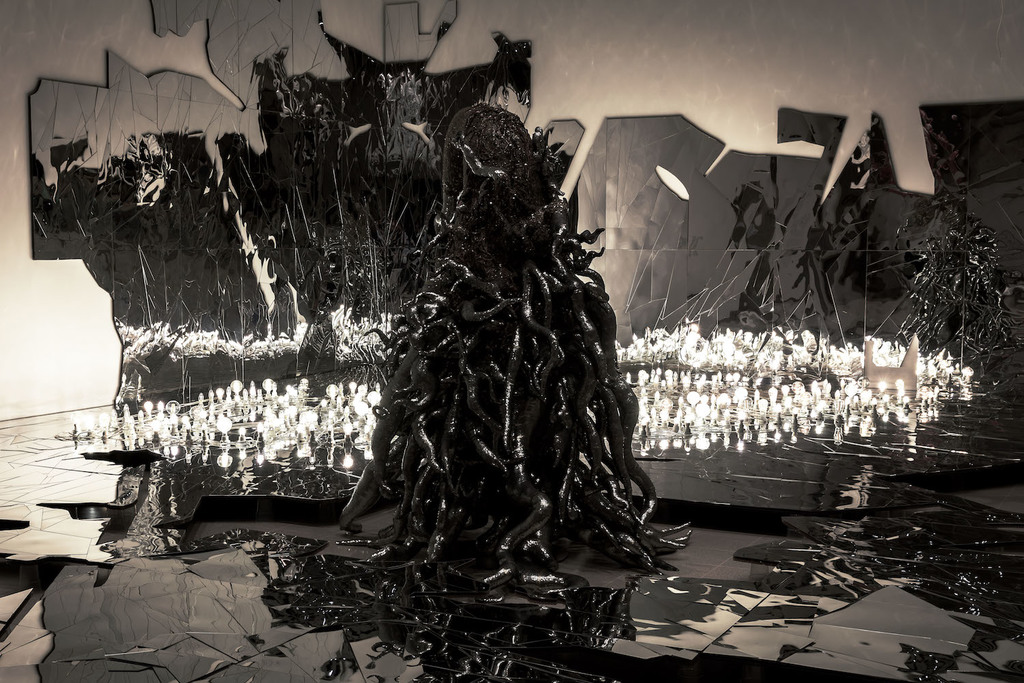 ‘What we are’ is the essential query, raised again and again throughout Lee Bul’s Crashing at Hayward Gallery until August 19th. Are we our bodies? Are we our gender? Are we where we come from? Are we, perhaps, just a collection of organic materials? “I choose what I work with carefully”, says Lee. “Everything has connotations, stories.” In Silk Paintings (in particular, as elsewhere) Bul is interested in substances which “come from the inside out”: silk, from silk worms; mother of pearl, from shells. Her iconic ‘monster’ pieces, part costume and part sculpture, investigate the possibility of a kind of physical inversion. The vulnerability of our bodies is both negated and underscored by these works, each a kind of heavy shell composed of additional limbs and internal organs. They’re as hideous as we are, turned inside out or scrambled by something like a truck. Wearing them through the streets of Seoul, as Bul did early on in her career (videos of these performances are on display in the exhibition’s second room), makes corporeal ancient questions about private and public, in- and external.

This gesture of making herself at once vulnerable and monstrous sees Bul engage with questions of femininity, another topic to which she returns again and again. A video amongst the score of viewing booths in Room Two is titled, simply, Abortion. One of her earliest performance pieces, the work sees Bul suspended – naked, bound by a harness – from the ceiling of an auditorium for two hours. During that time, she sings pop songs and recites lines from poetry for an audience, spiky with lollipops provided so they could have something sweet in their mouths while Bul describes her experience of abortion (a procedure illegal in South Korea to this day.)

“I choose what I work with carefully”, says Lee. “Everything has connotations, stories.” 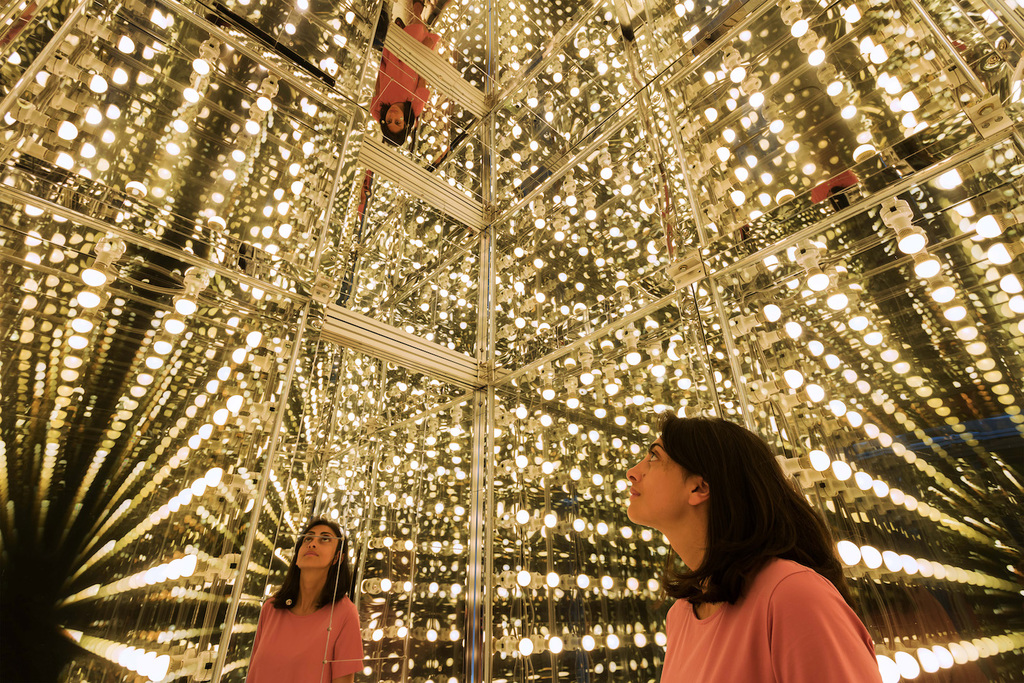 If Lee Bul is experimenting with introspection and performance, inside and outside experience, she’s eager for us to do the same. Mirrored surfaces appear again and again throughout Crashing – inside Bunker, on the floor and walls for a work titled Civitas Solis II, and finally in Via Negativa II. Loosely – and literally – speaking, this work is a maze of mirrors. Clad in reverse-printed text from a 1976 book by Julian Jaynes about ‘split consciousness’, the words are only legible from inside, where they’re reflected (inverted, i.e., ‘the right way round’) as snippets through the joints of the glass sheets which make up the immersive installation. These touch points, just out of reach, exemplify an experience of fragmentation as you walk carefully through a thousand corridors, viewed and viewing from as many angles. Lee Bul strives, with Via Negativa II, to create the impression of ‘endless fictional paths’, and she certainly succeeds. There I go, glimpsed from behind. There I walk across my own path. If I am made of everything I see and experience, what of all the versions of myself which saw something minutely different? Who leant against a wall to the left or right of this one? All those are here, and, as such, none of them more real than the other. If I move, so do they; the distinctions fall away. Lee Bul endeavours to have her viewer’s body and brain work ‘together, at the same time’ in large-scale installations such as this. Uniting physical and cerebral experiences into one hallucinatory grand narrative is a tall order: when the visual mirrors (pun intended) the experiential, there are snatches of that transcendence. This is where the exhibition culminates, and where Lee Bul’s practice comes full circle. You are made of what makes you. 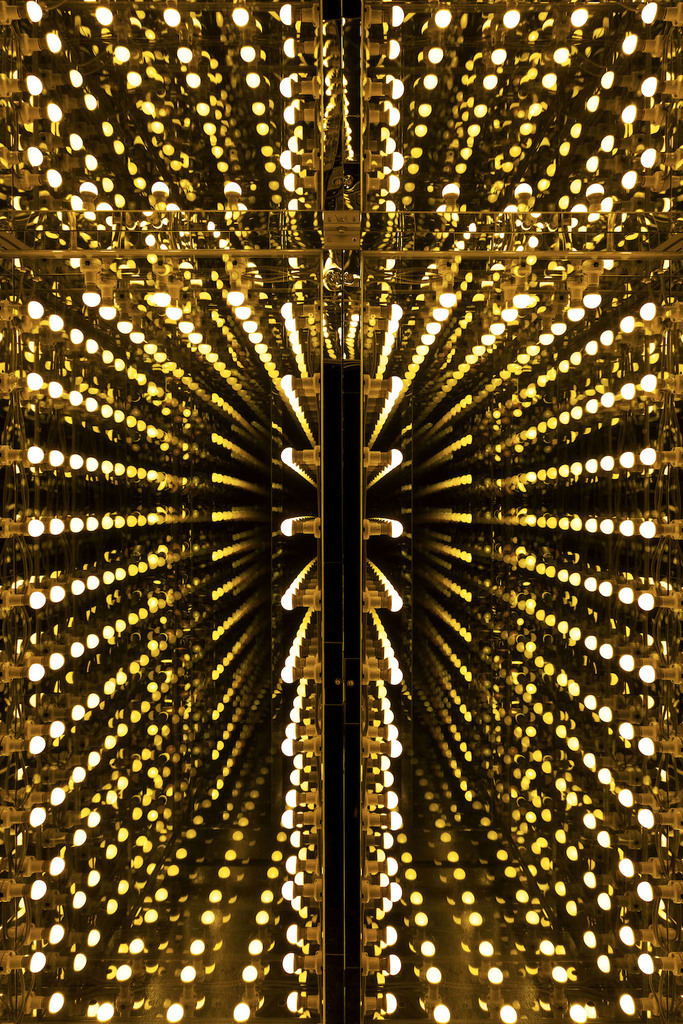